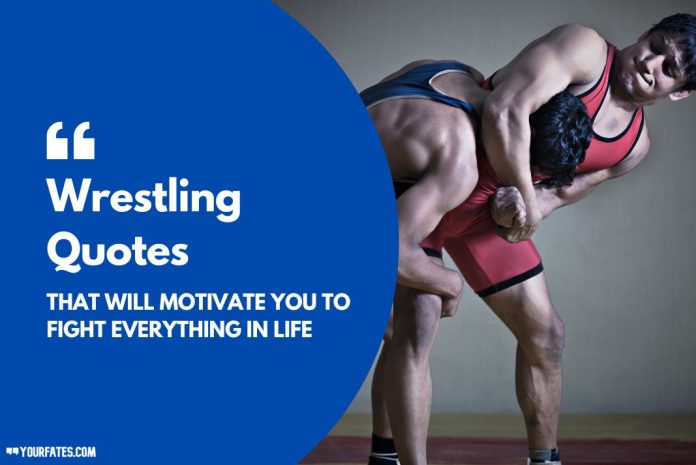 “There is no honour in not fighting at all.” – The Undertaker

Do you like watching wrestling? Or have you ever participated in Wrestling? If you have answered yes, you must have a wrestling attitude – the attitude that teaches you to fight till last and also teaches you how to handle defeat if you can’t win even after trying your best. We have brought you this amazing collection of Wrestling Quotes and Sayings by famous wrestlers and sportsmen that will get you a wrestling attitude.

Wrestling is a sport in which two players fight and try to throw each other on the ground. Life is something like that too. The fight is between you and yourself and sometimes between you and life.

During hard times, consider that there’s a fight between you and life. Life will try hard to make you cry and to give up but as a good wrestler, you have to keep smiling and moving on.

Sometimes, the fight is between you and yourself. When you are working to achieve a goal or learning a skill, make sure to always defeat the person you were yesterday and be a better version each day.

Here’s the list of wrestling quotes that will motivate you to fight everything in life. Also, if you are preparing for a sport or an event, share these wrestling quotes with your team to inspire them to give their best.

Don’t forget to also read these Gym Quotes to get you into the gym daily.

1. “Once you’ve wrestled, everything else in life is easy.” – Dan Gable

2. “No activity I know is more of a confidence builder and at the same time more ‘humility training’ than wrestling.” – Jim Leach

3. “Wrestling’s a form of expression, and it expresses vastness.” – John Darnielle 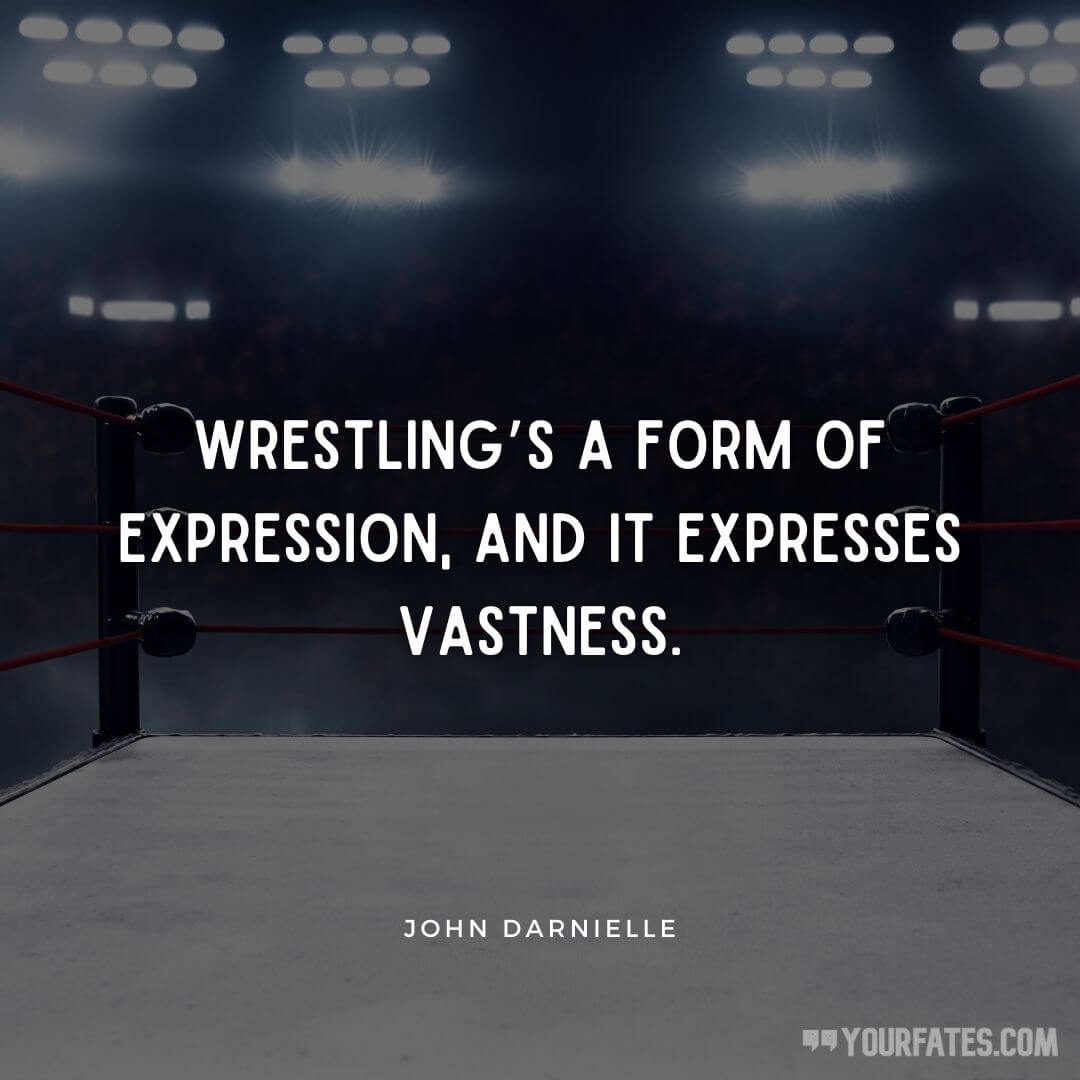 4. “The only things that matters in wrestling are your teeth and your testicles. Anything else, keep wrestling, stop whining.” – Gary Dierks

5. “Wrestling will be around forever. It’s been around thousands of years. It’s going to be around till the end of time.” – Mark Schultz

6. “Wrestling is not an action; it is a sport.” – Anushka Sharma 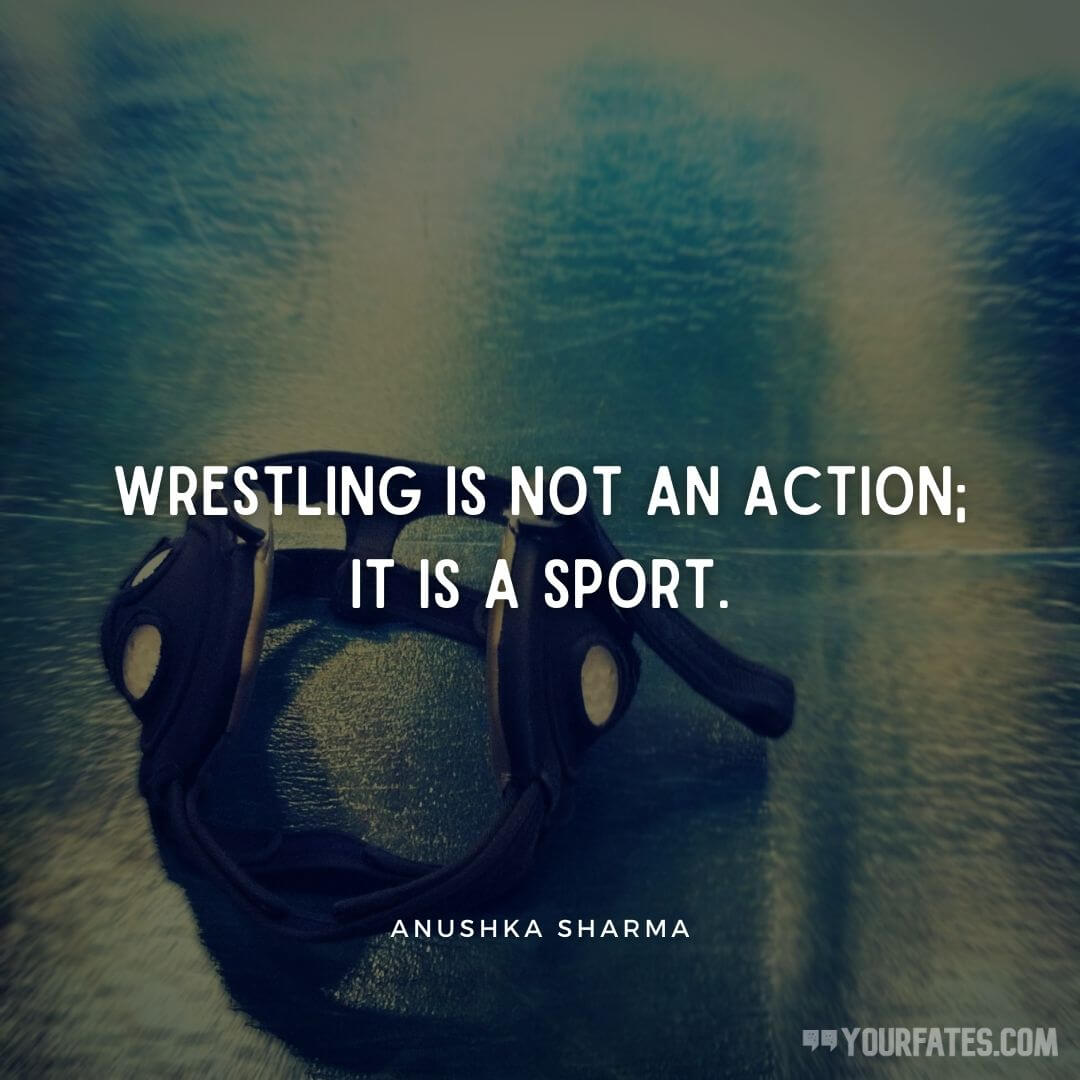 7. “A lot of my intensity in wrestling was due to my mental preparation before the matches. I got myself into a different world.” – Dan Gable

8. “This whole wrestling world is a different breed, there’s no doubt.” – Roman Reigns

10. “I swear it upon Zeus an outstanding runner cannot be the equal of an average wrestler.” – Socrates

12. “Wrestling teaches you nothing comes easy. Nothing in life comes easy, so you have to work at it.” – Mike Sullivan

13. “Wrestling is a universal language. The moves, the facial expressions, most people understand.” – Shinsuke Nakamura 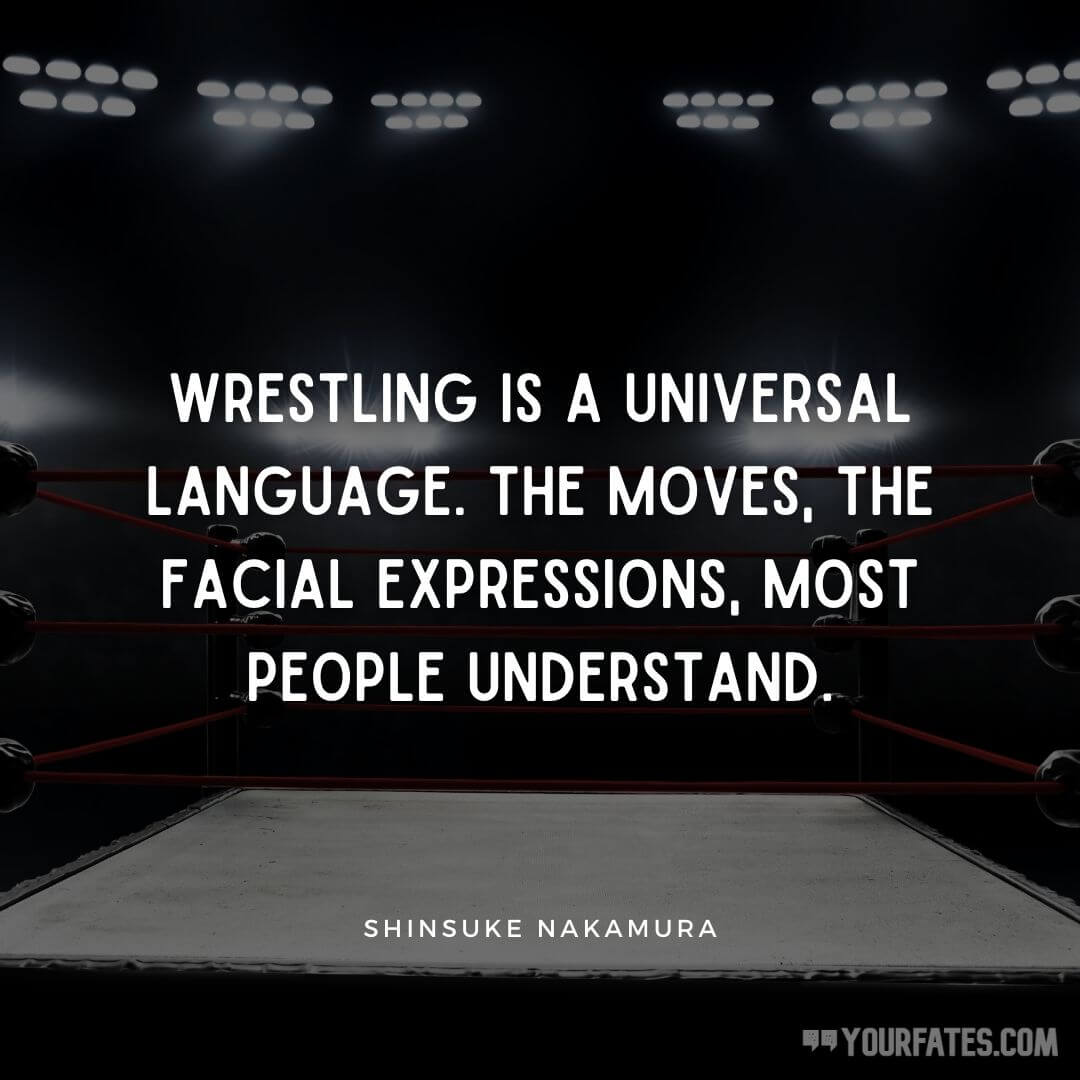 14. “If Shakespeare was alive today he would be writing wrestling shows” – Chris Jericho

15. “Everyone has the fire, but the champions know when to ignite the spark.” – Amit Ray

16. “We, as a wrestling community, better remember it is more than one individual that makes a winner.” – Dan Gable

17. “When you’re wrestling with life and/or yourself and getting the beat down, don’t forget to tag God in!” – Jagadeesh Kumar

18. “Wrestling and acting couldn’t be any more different in terms of what it takes to entertain. Wrestling is explosion, acting is implosion. One really screws up the other.” – Roddy Piper

If you’re enjoying these quotes, make sure to read our collection of Yoga Quotes to boost your morning routine.

19. “The difference between the impossible and the possible lies in a man’s determination.” –Tommy Lasorda

21. “When the day comes when you don’t believe in yourself, there’s the door. Get the hell out! ” – John Cena

22. “I forgot how it feel like to have the top of my foot hurt so bad from kicking people on the face…” – Randy Orton

23. “Everything I do is to become better, the best ever and I’m not going to stop.” – Dolph Ziggler

24. “The difference between a successful person and others is not a lack of strength, not a lack of knowledge, but rather a lack of will.” – Vince Lombardi

25. “In wrestling, there’s a shelf life, and some wrestlers don’t pay attention to the shelf life.” –Dwayne Johnson 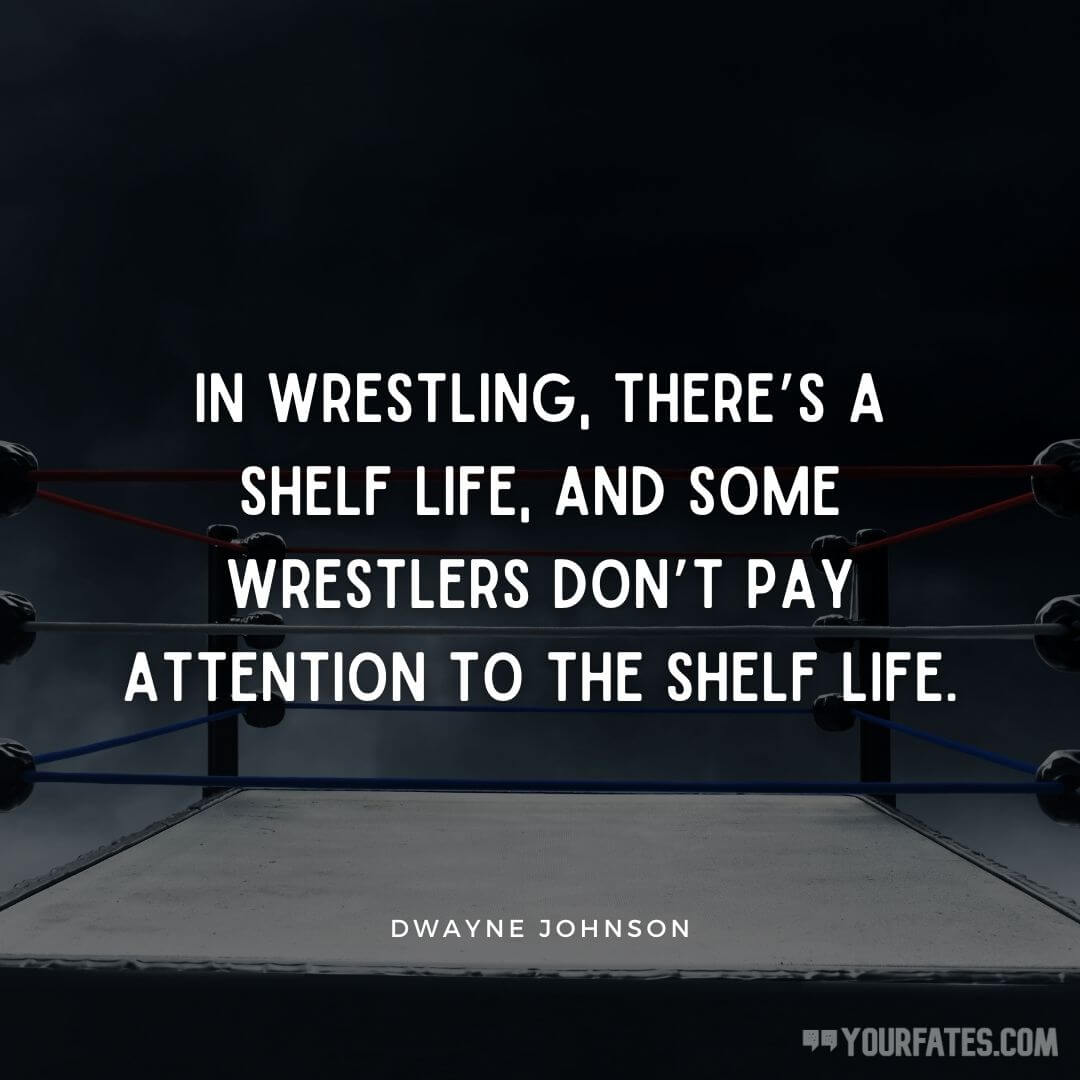 29. “Success isn’t always about greatness, it’s about consistency…” – The Rock 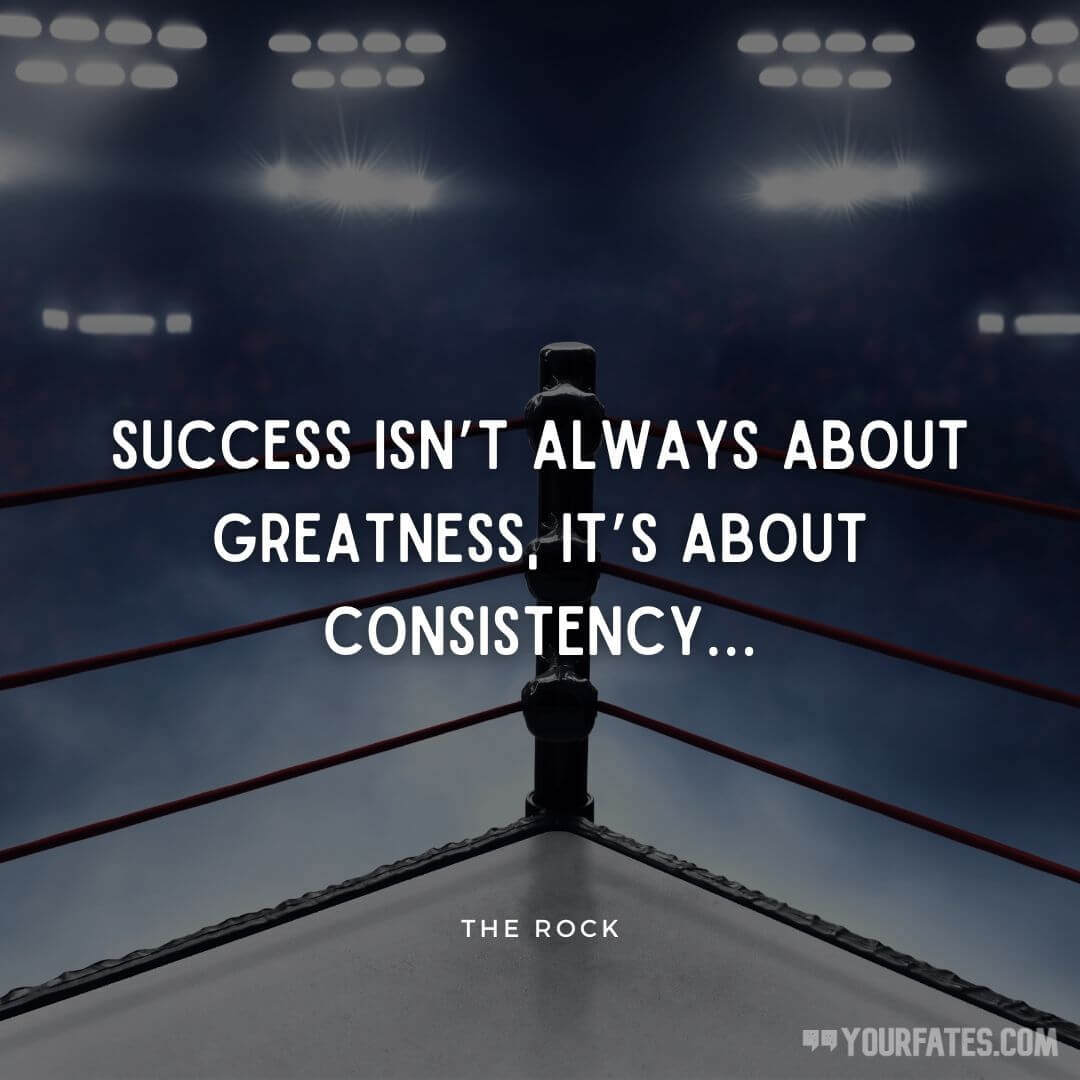 30. “I can take anyone down at any time; they can’t take me down; no one can ride or turn me; I can control anyone.” – Dan Gable

33. “Wrestling is a team sport, and an individual sport all rolled into one.” – William Baldwin

34. “Never stop fighting till the fight is done!” – Elliot Ness

36. “There’s a lot of blood, sweat, and guts between dreams and success.” – Bear Bryant

37. “The pain of preparation is nothing like the pain of losing.” – John Smith

38. “Success is the good fortune that comes from aspiration, desperation, perspiration, and inspiration.” – Evan Esar

39. “When I hear people boo, that just makes me want to go out there and work harder.” – John Cena

41. “Determination is the strength needed to succeed.” – Dan Gable 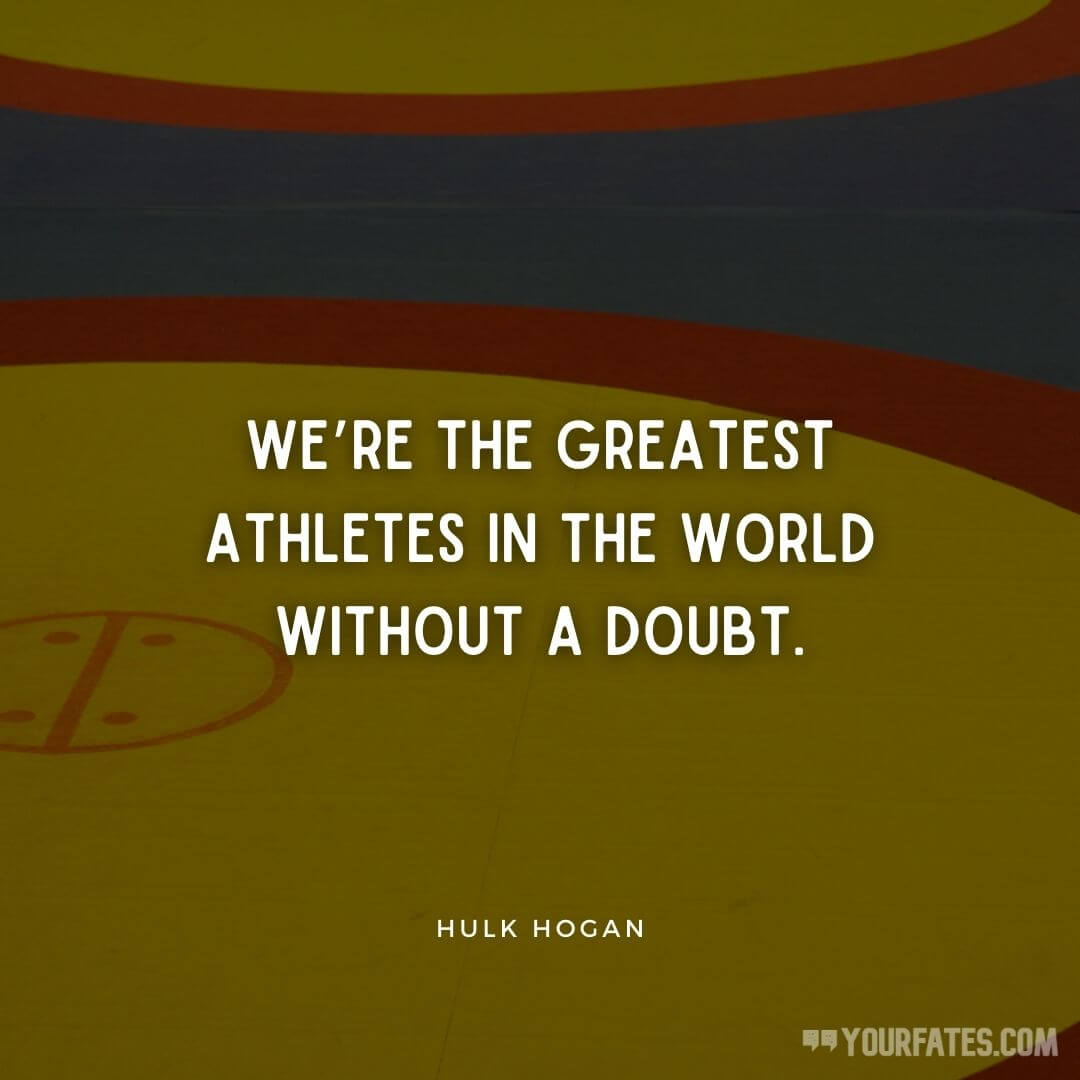 43. “The art of living is more like wrestling than dancing.” – Marcus Aurelius

44. “Whatcha gonna do, when Hulkamania runs wild on you!” – Hulk Hogan 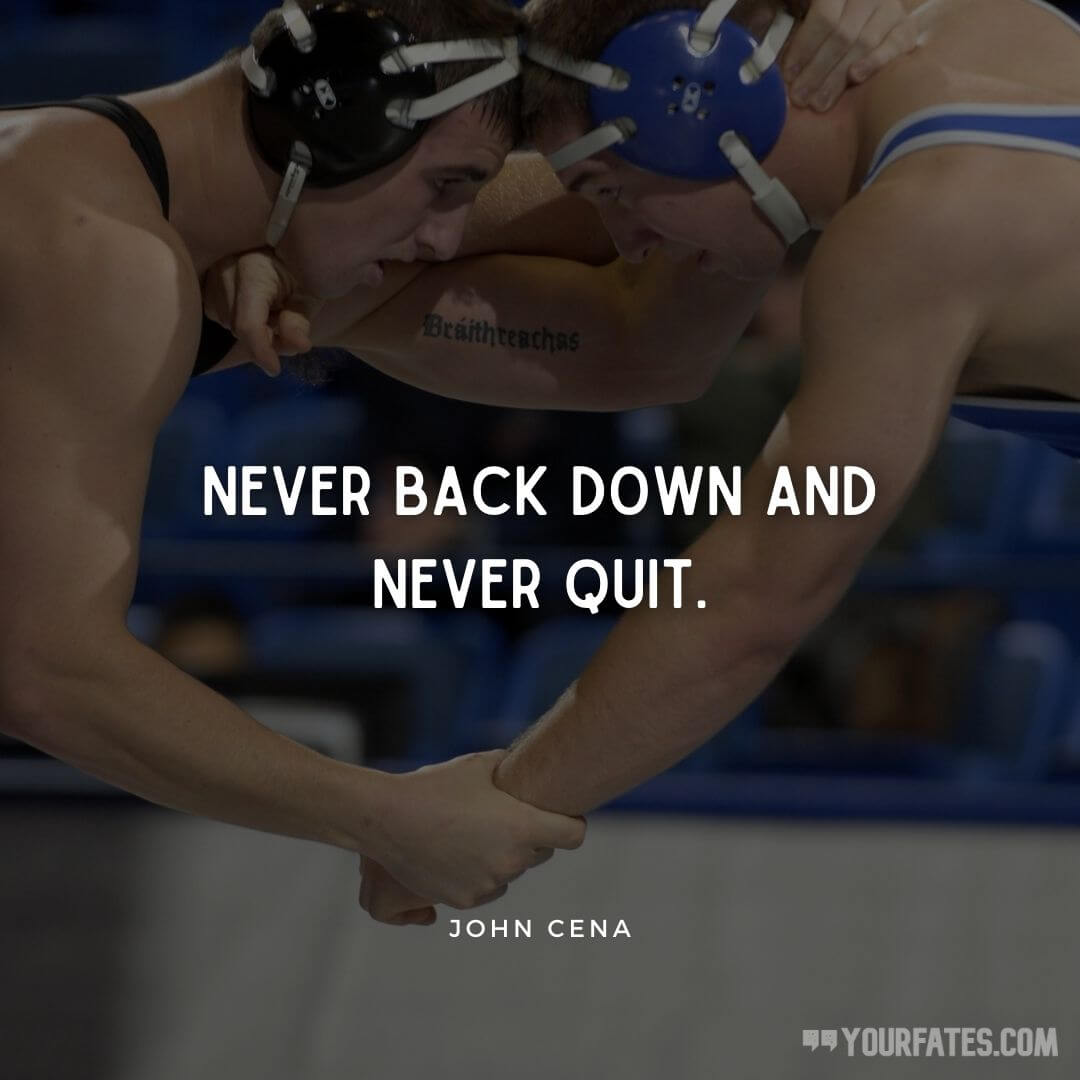 46. “There is no great achievement that is not the result of patient working and waiting.” – J. G. Holland

47. “Wrestling is one of the last truly rebellious American things left.” – Billy Corgan

50. “We’re the greatest athletes in the world without a doubt.” – Hulk Hogan 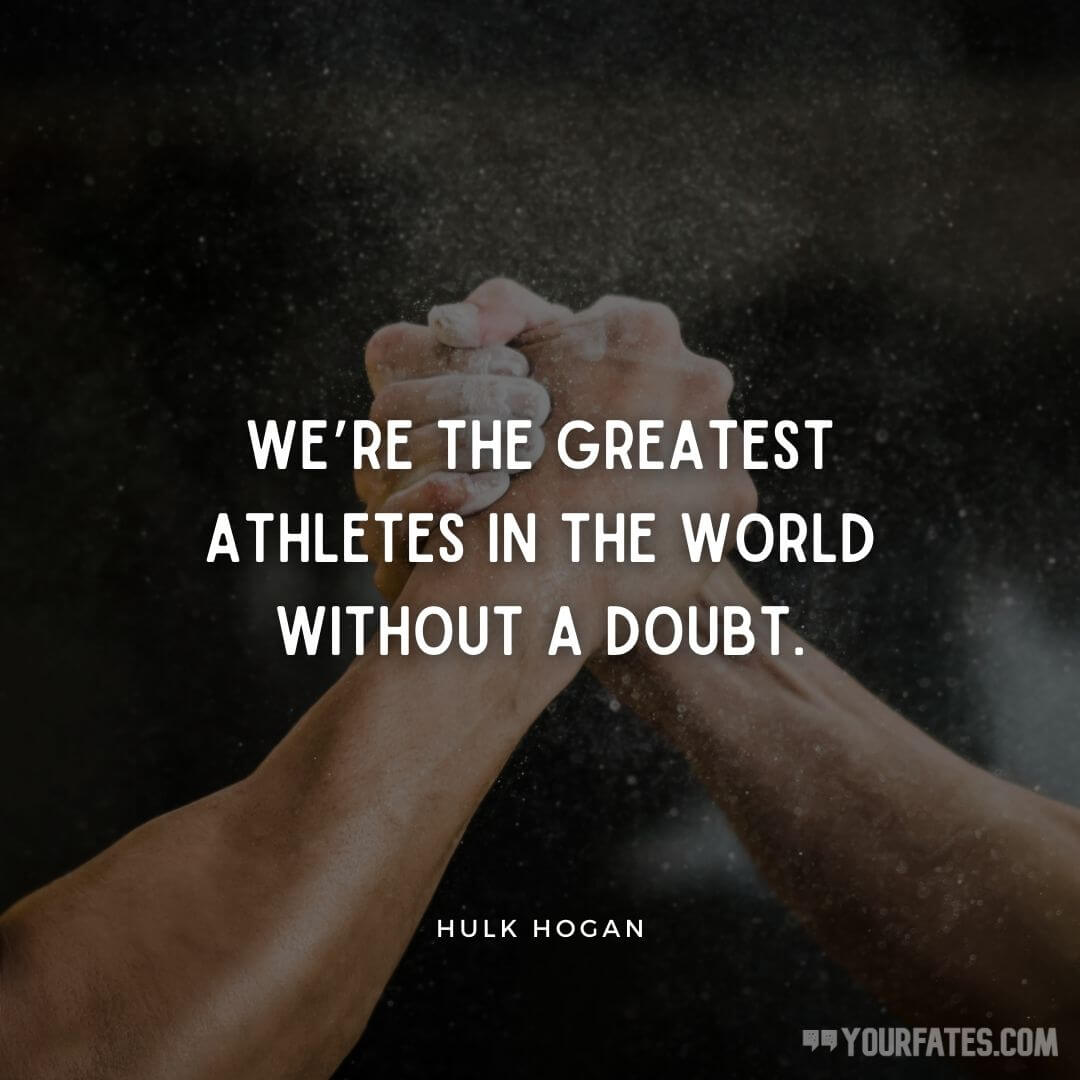 51. “I’m the man that made wrestling famous.”- Hulk Hogan

53. “We can wrestle sometimes and see who is OK and who is KO.” – Natalya Vorobyova

54. “Space Mountain may be the oldest ride in the park, but it has the longest line.” – Ric Flair

55. I don’t have 30 days and 30 nights to show you why all the ladies say there’s nothing finer…than Scott Steiner.”-Scott Steiner

58. “Hey, I drank milk that was a day past its expiration date. Now that is extreme!” – Kurt Angle

61. “Helen Hart is the only person I know with an autographed copy of the Bible.” – Jerry Lawler

62. “Once you’ve wrestled, everything in life is easy.” – Dan Gable 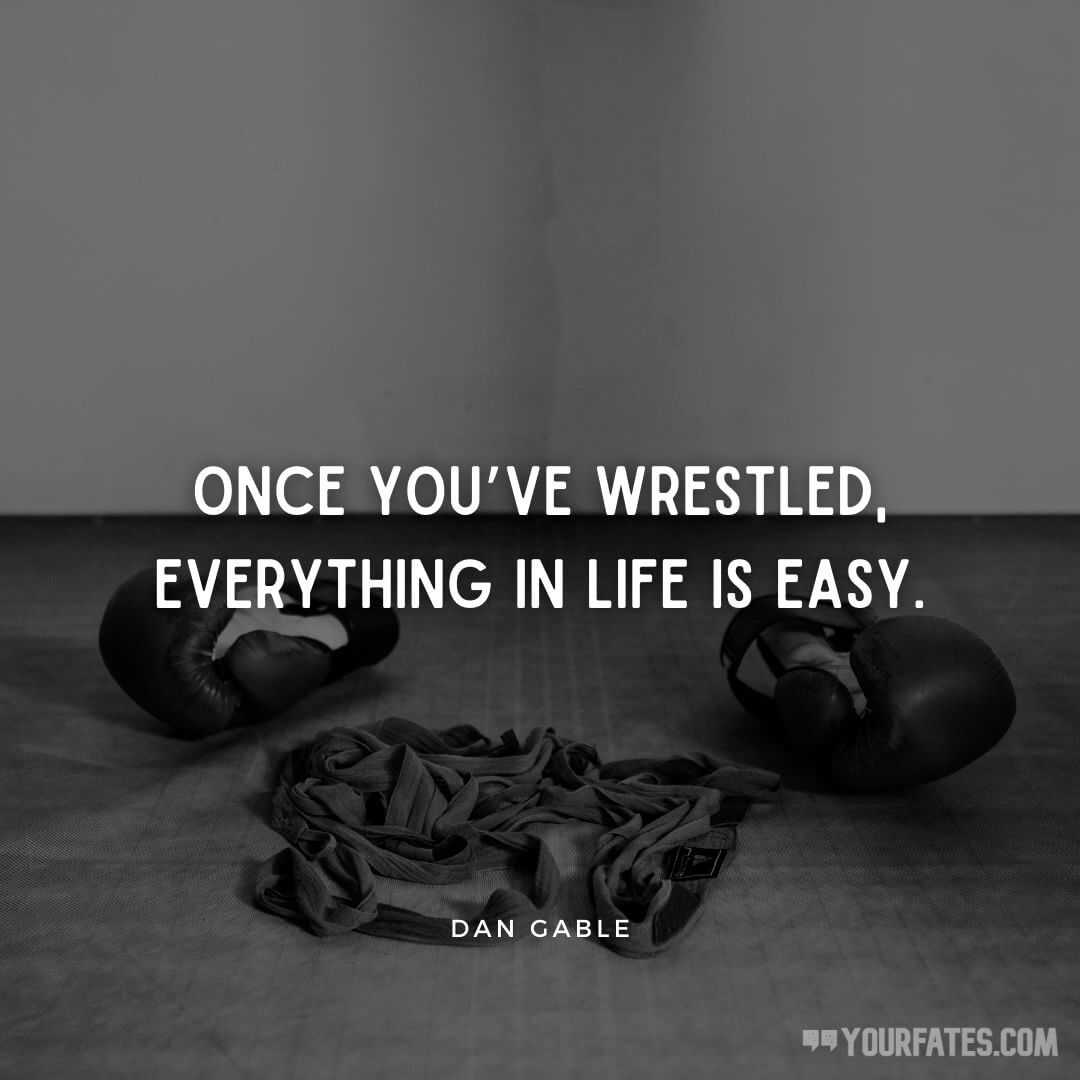 63. “The Undertaker, with his Mickey Mouse tattoos and his 33-pound head.” – The Rock

64. “Just when they think they know the answers, I change the questions.”- Rowdy Roddy Piper

65. “Wrestling is a little like wrestling a gorilla. You don’t quit when you are tired, you quit when the gorilla is tired.” – Unknown

World is a wrestling court. You will get to fight new players each time. Make sure to be the best wrestler. If you can develop the wrestling attitude, you can handle every situation of your life very well.

We hope you have enjoyed these Wrestling Quotes and Sayings by famous wrestlers and sportsmen and get inspired. Also, If you’ve found us useful, please do consider telling your friends about it. All you have to do is send these quotes on WhatsApp and ask them to subscribe to us.

Previous article
105 Running Quotes to Motivate You to Stay Active

105 Running Quotes to Motivate You to Stay Active

100 Gym Quotes To Get You Into Gym Daily