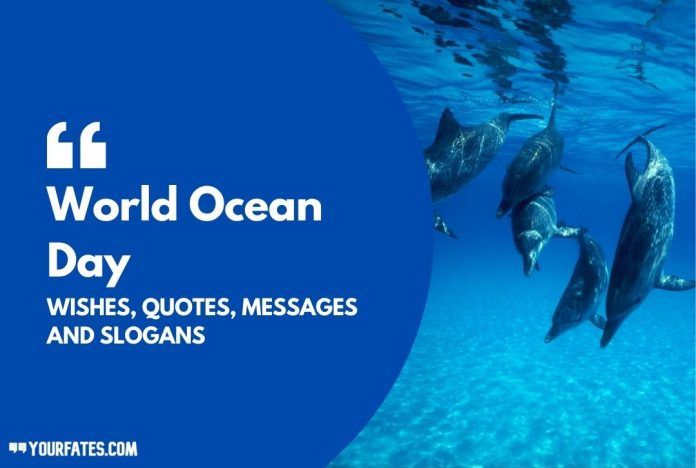 You can never reach the heights of life if you have never been in the depths of life because this is the balance of life. One moment of suffering in hard work results in other moments of achievement. One moment of being strong in tough times results in other moments of happiness and so on. And this is exactly how nature balances everything. Nature has given us the hidden worlds of both space and the earth’s core. Similarly, nature has given us the sky and oceans. The ocean is a part of nature so deep that it will forever remain unexplored to some extent. So here we have brought World Ocean Day Wishes, Quotes, Messages, and Sayings.

World Ocean Day is celebrated every year on the 8th of June. This day came into existence in 1992 as proposed by Canada’s International Centre for Ocean Development. And later it was officially recognized by the UN in 2008. This day is designated to make people aware of the condition of oceans and the effects of human activities on them. Oceans are not untouched by the pollution of humans and thus along with making sustainable development programs for lands, we need to emphasize on the sustainable development of our oceans too.

So here are these World Ocean Day Wishes, Quotes, Messages, and Sayings, share these to join hands with everyone for this cause:

1. “There’s nothing more beautiful than the way the ocean refuses to stop kissing the shoreline, no matter how many times it’s sent away.” -Sarah Kay

2. “If you want to hear the distant voice of the ocean put your ear to the lips of a seashell.”
-Curtis Tyrone Jones

3. “The ocean is a mighty harmonist.” -William Wordsworth

4. “The cure for anything is saltwater sweat, tears, or the sea.” -Isak Dinesen

6. “How inappropriate to call this planet Earth when it is quite clearly Ocean.” -Arthur C. Clarke

7. “Faith is knowing there is an ocean because you have seen a brook.” – William Arthur Ward

8. “Ocean: A body of water occupying two-thirds of a world made for the man who has no gills.” -Ambrose Bierce

9. “The sea, once it casts its spell, holds one in its net of wonder forever.” -Jacques Cousteau

10. “She loves the serene brutality of the ocean, loves the electric power she felt with each breath of wet, briny air.” -Holly Black

11. “The ocean is a central image. It is the symbolism of a great journey.” -Enya

12. “We ourselves feel that what we are doing is just a drop in the ocean. But the ocean would be less because of that missing drop.” -Mother Teresa

13. “You will love the ocean. It makes you feel small, but not in a bad way. Small because you realize you’re part of something bigger.” -Lauren Myracle

15. “The ocean makes me feel really small and it makes me put my whole life into perspective… it humbles you.” -Beyoncé Knowles

16. “It’s the sound of the sea that makes you believe in mermaids.” -Anthony T.Hincks

17. “We are like islands in the sea, separate on the surface but connected in the deep.” -William James

18. “In every outthrust headland, in every curving beach, in every grain of sand, there is the story of the earth.” -Rachel Carson

19. “Oceans are a big part of our lives and it is time we realize its importance.”

20. By destroying and polluting the oceans human beings will be digging their own graves, so be wise and nurture the oceans. Wish you all a Happy World Oceans Day.

21. Save the oceans as the Earth would not be the same if the major part of its constituent goes polluted and dead. Have a Happy World Oceans Day everyone!

22. Each and every drop of water has the power to swell the heart of the ocean. Promise to never waste it and always value it for a better life. Warm wishes to you on World Oceans Day.

23. So many species of animals would lose their homes if we do not take care of the oceans. Have a happy World Oceans Day!

24. Save the oceans and save the world to save mankind. Have an educated and aware World Oceans Day!

25. The benefits that we get from the oceans are endless but even then we forget that we should keep our oceans safe and healthy. Have a great World Oceans Day people!

26. World Oceans Day is the reminder that oceans are the most beautiful and most precious creation of the Almighty and we must respect them and save them to make our lives happier.

27. The oceans are meant to be peaceful and life-supportive. Help the oceans and wish everyone a happy World Oceans Day.

28. Always remember the power of one. Each one of us can contribute in saving our oceans. No effort is insignificant, no drop of water is too small, no good intention is too weak. Let us join hands to bring the change. Happy World Oceans Day.

30. Wishing a very Happy World Ocean Day to you….. It is the responsibility of each one of us to protect it and save it for a healthier and happier world.

31. Let us make World Oceans Day more meaningful by making contributions at our levels in saving them. Remember, even the smallest of the acts can prove to be revolutionary.

32. On the occasion of World Ocean Day, let us dedicate ourselves to clean our oceans which make our Mother Earth so beautiful.

33. We are blessed to have such beautiful oceans in our world and we should do our best to protect them. Have a happy World Oceans Day.

34. Oceans are presents from God and we must take care of them by being more responsible. Happy World Oceans Day.

35. World Oceans Day reminds us that every day we are spoiling the beautiful oceans with our wrong deeds. Let us reverse it all and save them.

36. There is going to be no life is we are not going to save our oceans. On the occasion of World Oceans Day, let us join hands to save them.

37. We should not take the oceans for granted any longer. Have an awful World Oceans Day everyone!

38. The Oceans have life and human beings have been treating them like dustbins in spite of knowing that. It’s time to stop and get educated on World Oceans Day.

39. Save the oceans as the Earth would not be the same if the major part of its constituent goes polluted and dead. Have a happy World Oceans Day everyone!

40. Save the oceans and save the world to save mankind. Have an educated and aware World Oceans Day!

The ocean in itself holds life which is as huge as land in numbers and value. And thus we need to take into account its condition as responsibly as we take ourselves. Humankind has always paid back for destructing nature. And it is high time that we start looking after mother nature if we want to survive any longer or any better on planet earth. Let us join hands to de-pollute.

What is the motto of ocean day?

On World Oceans Day, the world joins hands to protect the largest water body surrounding us, which is an integral part of human lives, the oceans because of No water, no life. No blue, no green.

We hope you like these collections of World Ocean Day Wishes and Messages. Also, If you’ve found us useful, please do consider telling your friends about it. All you have to do is send these quotes on WhatsApp and ask them to subscribe to us.