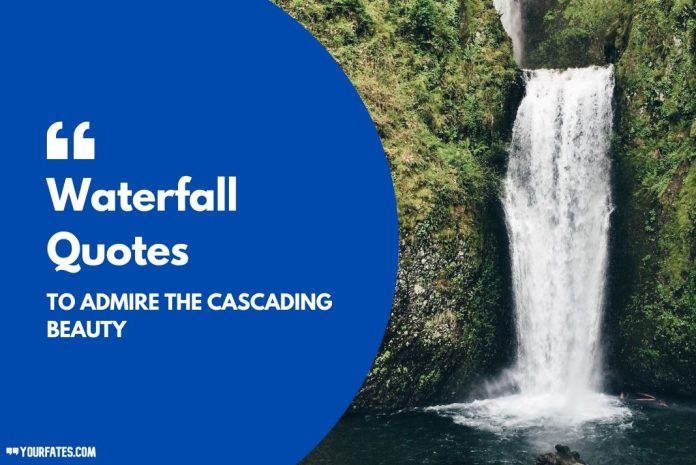 A waterfall is beautiful and it keeps going on without a moment to spare, without a doubt in his heart and without any guilt to hold, helping vegetation and wild to flourish through its water. And hence we have brought the best Waterfall Quotes and Sayings that will help us get closer to this beauty of nature.

When a waterfall falls down from a cliff onto the ground, the water is disturbed and disoriented into a million drops, but what does it do on the ground? Well, it leaves behind what happened on the cliff for the upcoming water to experience it then it either makes a pit on the ground to rest comfortably or makes way for a stream to flow further. In both ways it calms itself down and integrated to work on greater things to happen.

There is so much beauty in them to admire and so much to learn. So let us take a look at these beautiful Waterfall Quotes and Sayings:

1. “There’s no better place to find yourself than sitting by a waterfall and listening to its music.” – Roland R Kemler

2. “Your love is like a waterfall, running wild and free.” – Chris Tomlin

4. “There is a hidden message in every waterfall. It says, if you are flexible, falling will not hurt you.” – Mehmet Murat Ildan

5. “Water is the most perfect traveller because when it travels it becomes the path itself!” – Mehmet Murat Ildan

6. “It is life, I think, to watch the water. A man can learn so many things.” – Nicholas Sparks

7. “Waterfalls wouldn’t sound so melodious if there were no rocks in their way.” – Rishabh Gautam 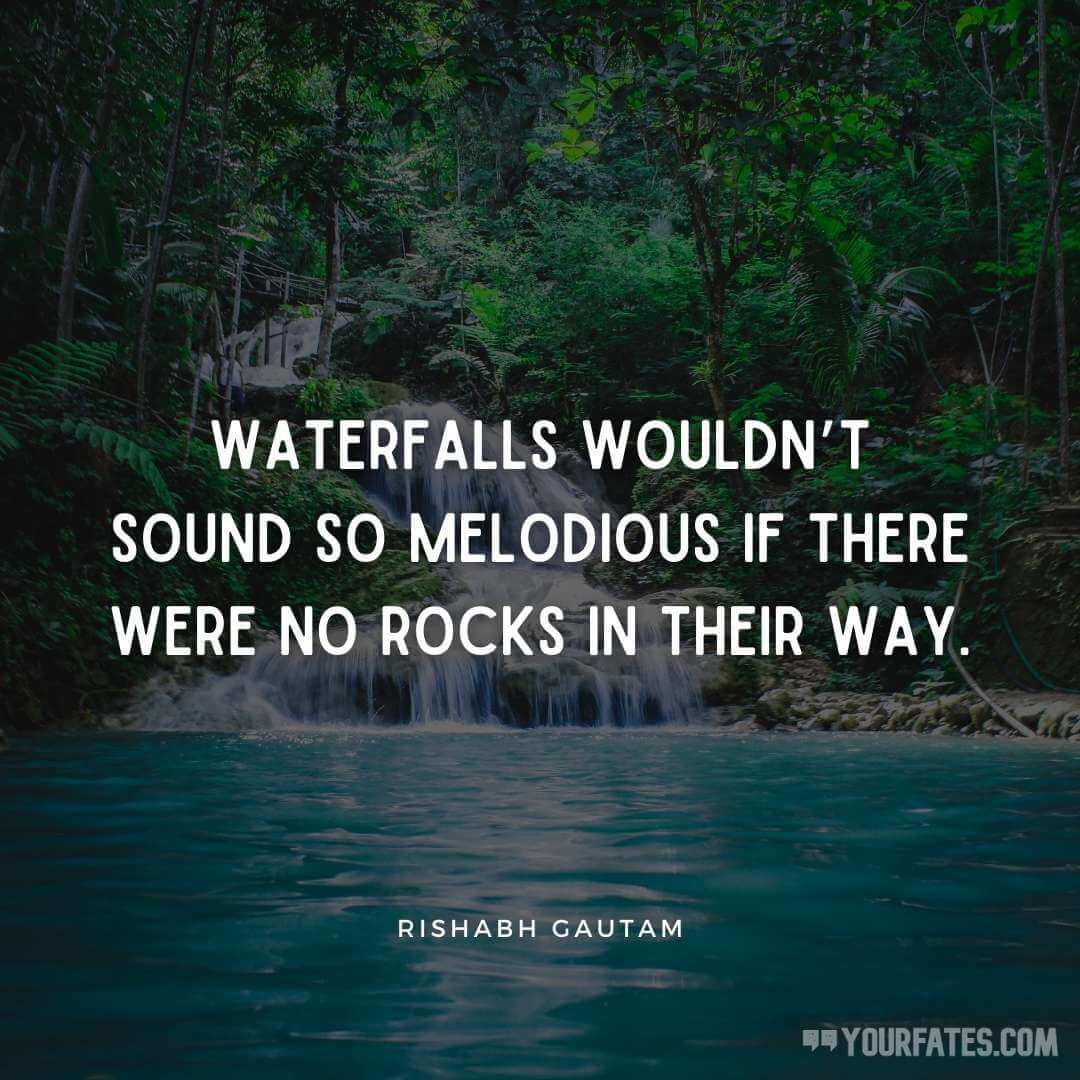 8. “Grace is finding a waterfall when you were only looking for a stream.” – Vanessa Hunt

9. “When the moonlight and the waterfall come together, all other things fade from the scene!” – Mehmet Murat Ildan

10. “A waterfall cannot be silent, just as wisdom. When they speak, the voice of power speaks.” – Mehmet Murat Ildan

13. “There is a waterfall in every dream. Cool and crystal clear, it falls gently on the sleeper, cleansing the mind and soothing the soul.” – Virginia Alison

14. “We live in a wonderful world that is full of beauty, charm and adventure. There is no end to the adventures that we can have if only we seek them with our eyes open.” – Jawaharlal Nehru

15. “Look with open eyes, and you will see the beauty of the waterfall.” – Anthony Hincks 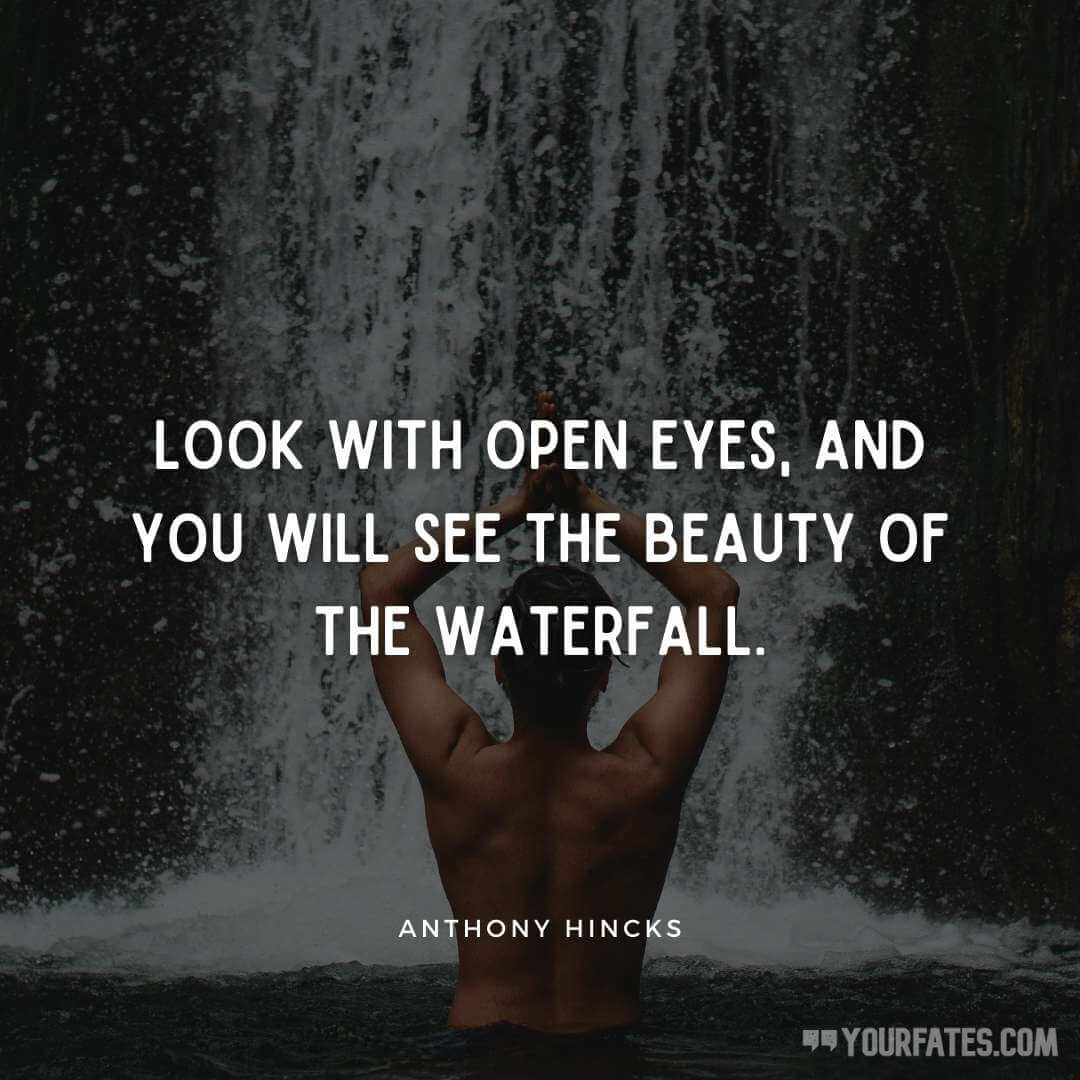 16. “Many a calm river begins as a turbulent waterfall, yet none hurtles and foams all the way to the sea.” – Mikhail Lermontov

17. “I can see my rainbow calling me through the misty breeze of my waterfall.” -Jimi Hendrix

18. “My mind is a raging torrent, flooded with rivulets of thought cascading into a waterfall of creative alternatives.” – Mel Brooks

19. “I shift an infinitesimal movement towards him. It is like the leap from a waterfall. I do not know, until then, what I am going to do.” – Madeline Miller

20. “I love the sounds and the power of pounding water, whether it is the waves or a waterfall.” – Mike May 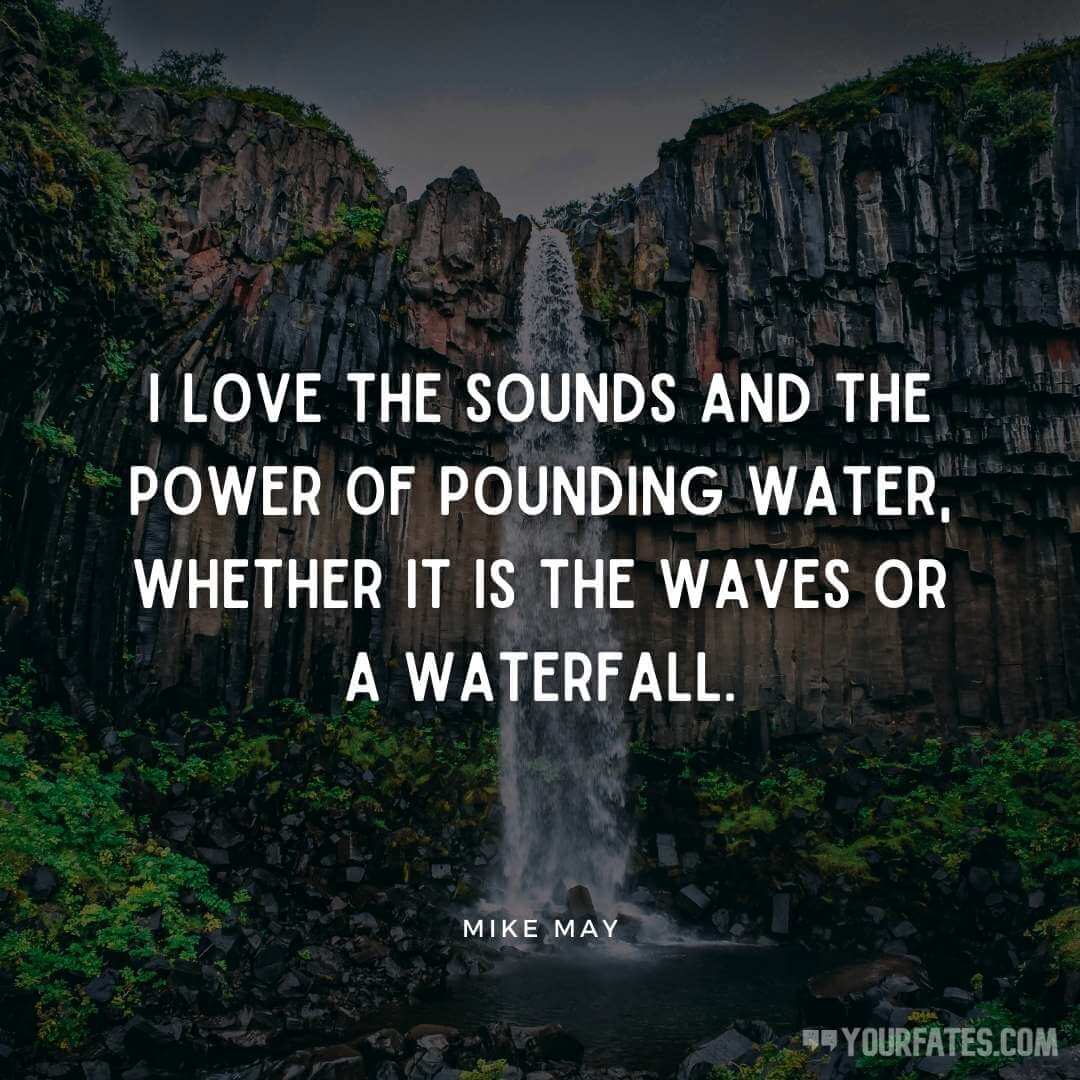 21. “They say that people who live next to waterfalls don’t hear the water.” – Jonathan Safran Foer

22. “Sometimes, it’s hard to tell how fast the current’s moving until you’re headed over a waterfall.” – Kimberly McCreight

23. “Be soft in your practice. Think of the method as a fine silvery stream, not a raging waterfall.” – Sheng-yen

24. “Mist to mist drops to drops. For water thou art, and unto water shalt thou return.” – Kamand Kojouri

25. “A waterfall cannot be silent, just as the wisdom! When they speak, the voice of power speaks!” – Mehmet Murat ildan 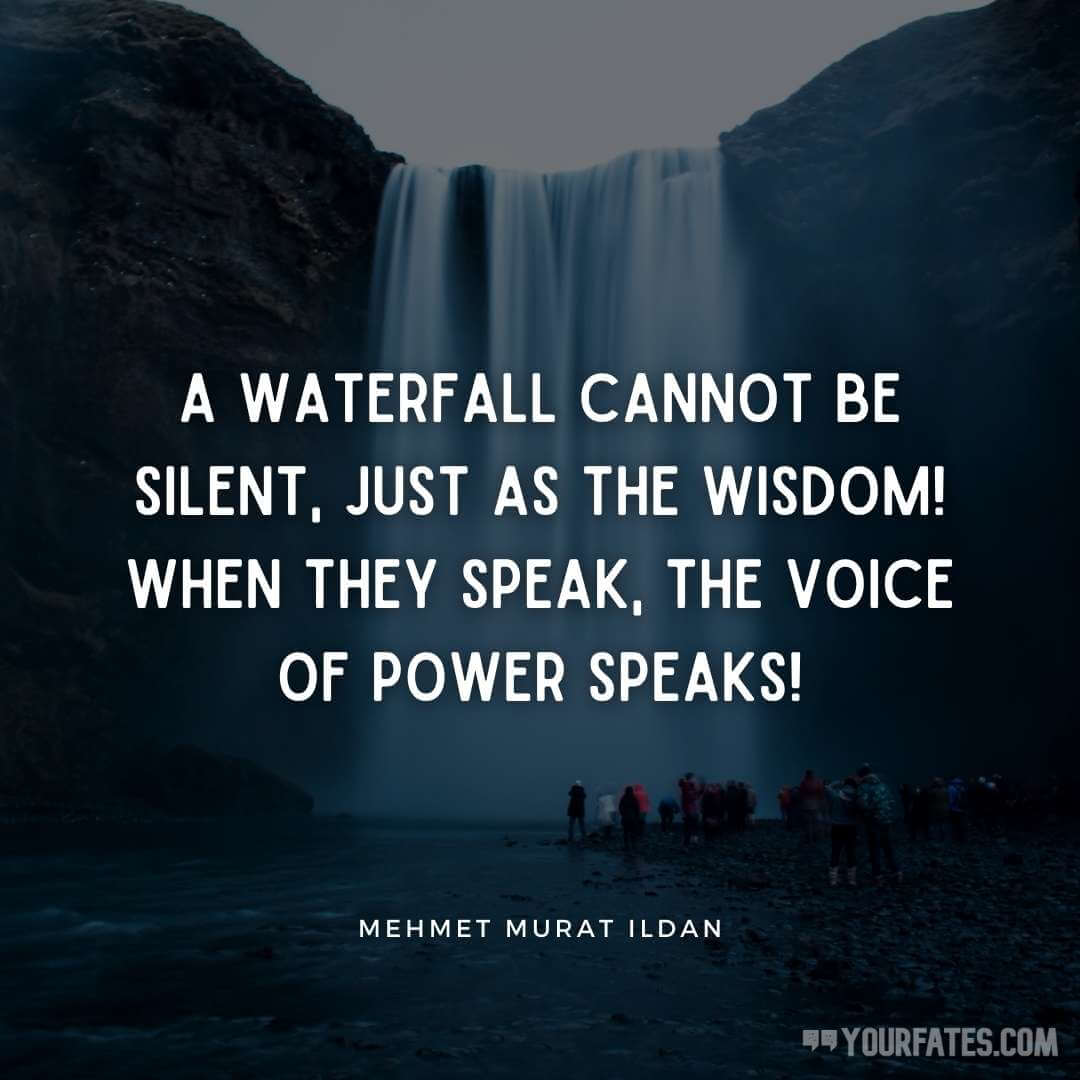 26. “Water does not resist. Water flows. When you plunge your hand into it, all you feel is a caress.” – Margaret Atwood

27. “Don’t go to restaurants that have waterfalls if you have a kidney condition.” -Johnny Carson

29. “I love you like a river that understands that it must learn to flow differently over waterfalls and to rest in the shallows.” – Paulo Coelho

30. “The vast waterfall of history pours down, and a few obituarists fill teacups with the stories.” – Marilyn Johnson

31. “With meditation, I found a ledge above the waterfall of my thoughts.” – Mary Pipher

32. “The idea is that flowing water never goes stale, so just keep on flowing.” – Bruce Lee

33. “Do not feel sad for your tears, as rocks never regret the waterfalls.” – Munia Khan

34. “Something’s going down like a waterfall, some strong feeling’s some old love.” – Carly Simon 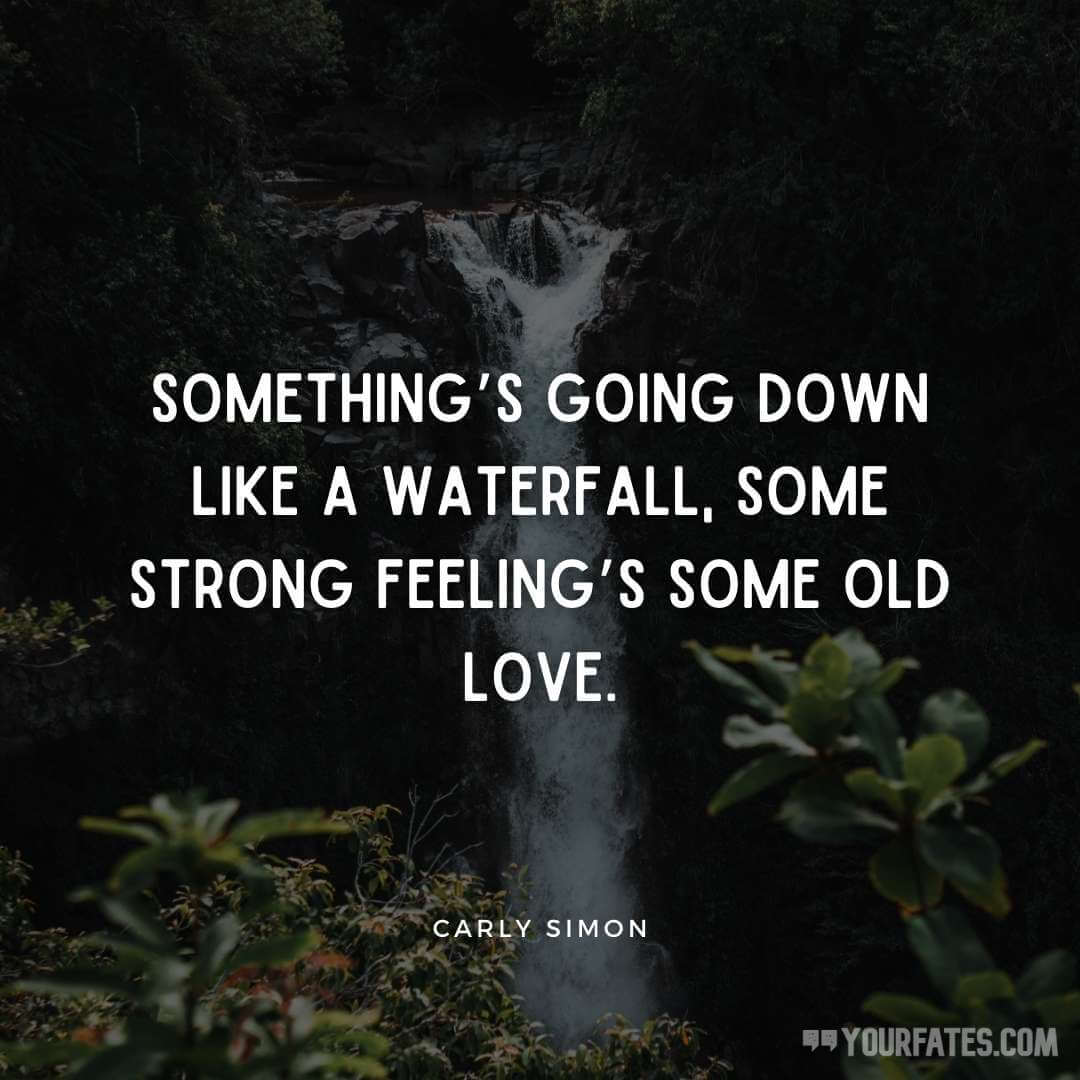 35. “The river plunged down in a long waterfall, plashing into several rocky pools on its way down the cliff.” – Alison Croggon

36. “Nature is painting for us, day after day, pictures of infinite beauty if only we have the eyes to see them.” – John Ruskin

37. “Be careful crossing above the waterfall, it’s a fatal spot.” – Karl Meltzer

38. “They say that people who live next to waterfalls don’t hear the water.” – Jonathan Foer

39. “The fall of your hair is rushing through my head like elegant waterfalls repeatedly dancing down into an open riverbed.” – Curtis Tyrone Jones

40. “A waterfall is concerned only with being itself, not with doing something it considers waterfall-like.” – Vernon Howard

42. “I keep my gratitude in my smile, a glistening waterfall in the sun.” -Sanober Khan 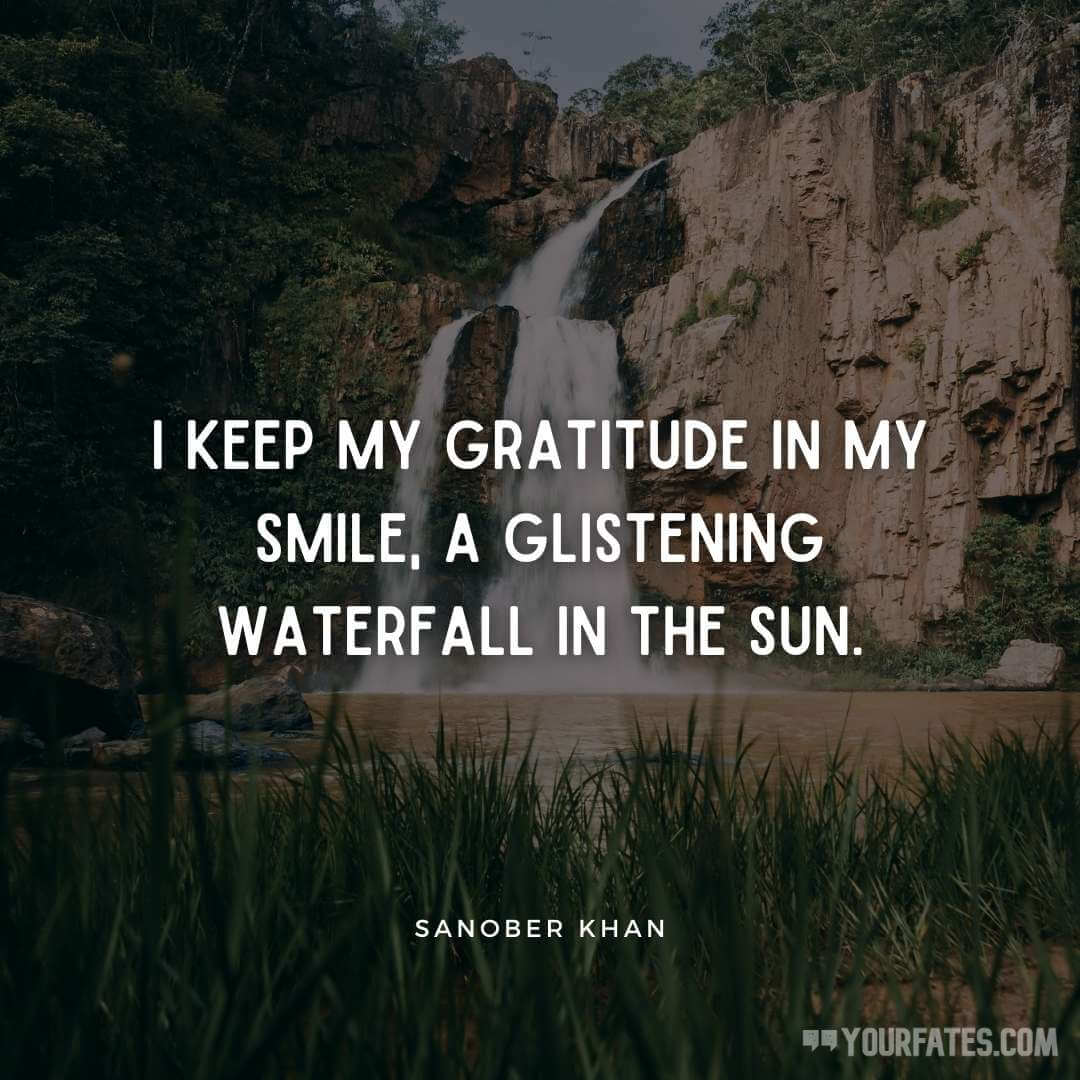 43. “I firmly believe that nature brings solace in all troubles.” – Anne Frank

44. “For an instant, silence, noisier than a waterfall.” – Salman Rushdie

45. “There’s hope at the bottom of the biggest waterfall.” – Patrick Ness

47. “No one ever steps into the same river twice.” – Heraclitus

50. “If there is magic on this planet, it is contained in water.” – Loren Eiseley

51. “There’s no time to be bored in a world as beautiful as this.” – John Ruskin

52. “The waterfall winks at every passerby.” – Marty Rubin

53. “The water tells none of its secrets.” – Nikos Engonopoulos 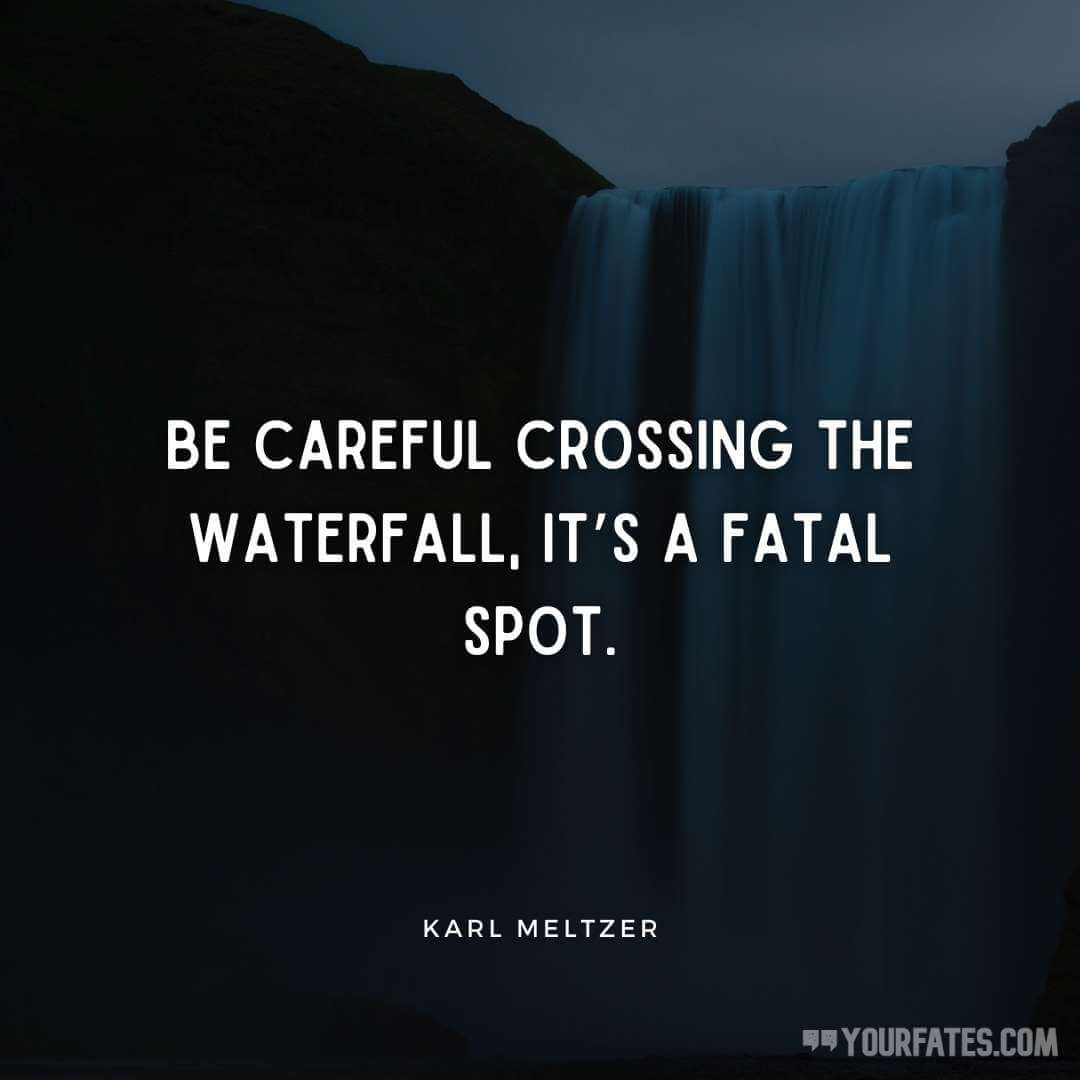 58. “The waterfall winks at every passerby.” – Marty Rubin

59. “A strong person and a waterfall always carve their own path.” – Unknown

60. “As long as I live, I’ll hear waterfalls and birds and winds sing.”- John Muir

62. “Waterfalls are exciting because they have power, they have rainbows, they have songs, and they have boldness and craziness!”– Unknown

63. “Our lives flow like water in a waterfall.” – Unknown

64. “The Warrior knows about the “waterfall effect”. – Paulo Coelho

66. “The idea is that flowing water never goes stale, so just keep on flowing.” – Bruce Lee 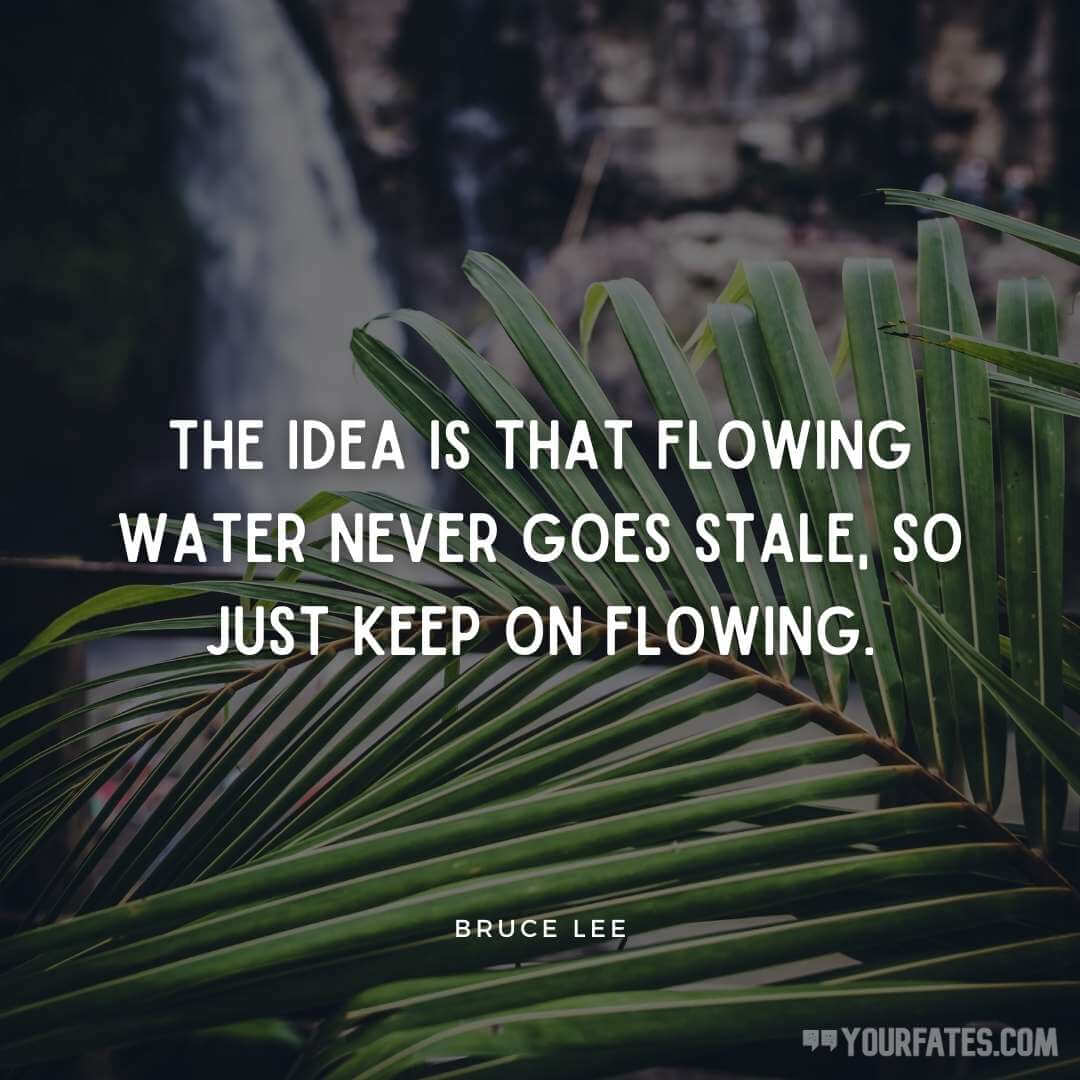 67. “Do not feel sad for your tears, as rocks never regret the waterfalls.”– Munia Khan

68. “There’s hope at the bottom of the biggest waterfall.” – Patrick Ness

69. “Nothing is softer or more flexible than water, yet nothing can resist it.” – Lao Tzu 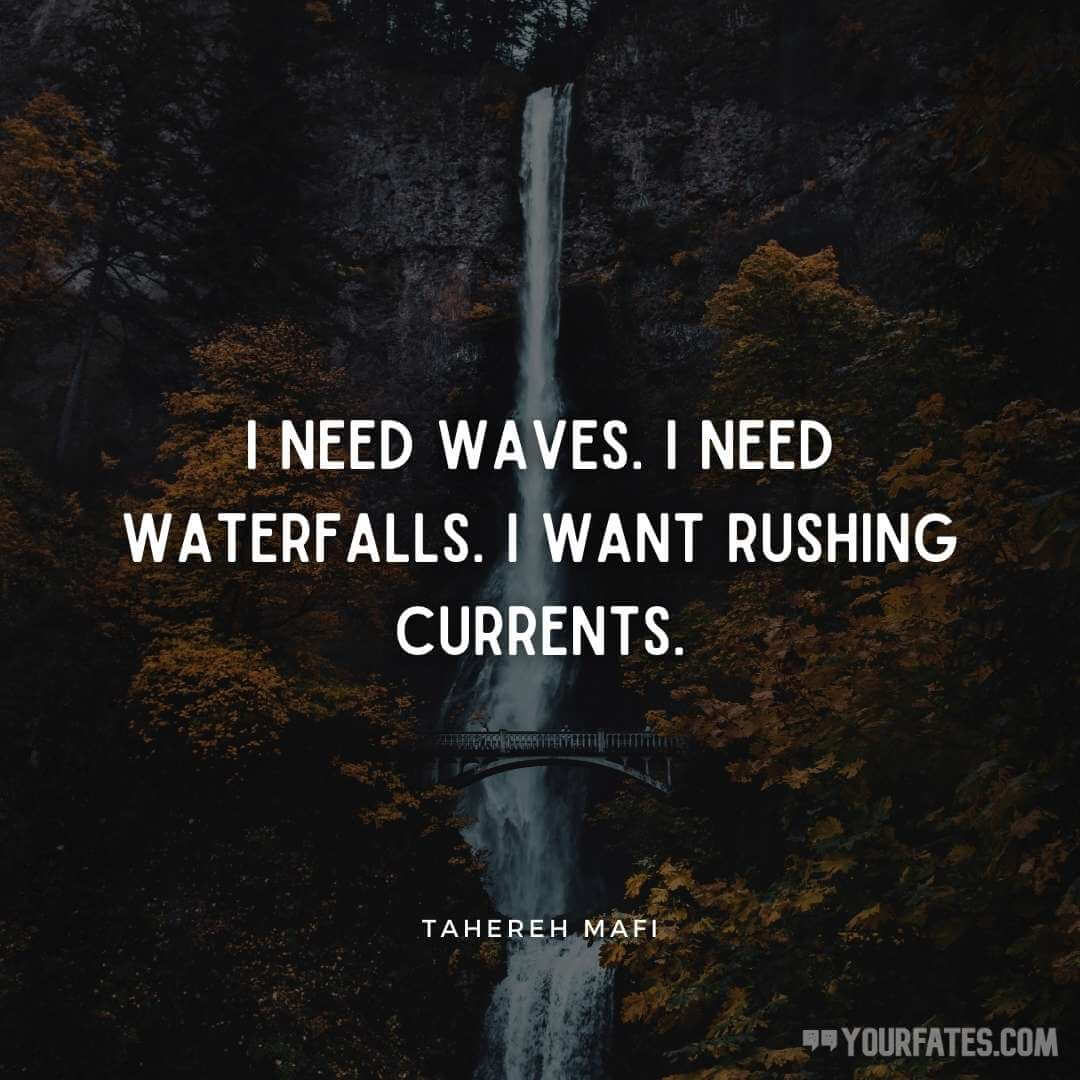 71. “Run wild and free like a waterfall” – Anamika Mishra

72. “Young leaves, the sound of a waterfall, heard from far and near.” – Yosa Buson

73. “With meditation I found a ledge above the waterfall of my thoughts.” – Mary Pipher

79. “I would caption this with a waterfall pun but that’s too mainstream” – Unknown

80. “Falling in love with this place”– Unknown

81. “I really have to get my plumbing fixed.”– Unknown

What do you caption a waterfall picture?

There are far too many phenomena in nature that depict the flow of a life. And each one teaches us something about how to live life. A waterfall is one of those many. Our world has some breathtakingly beautiful and huge waterfalls. Go see them if you can and indulge in one of the most terrific creations of Mother Nature.

We hope you like these collections of Waterfall Quotes. Also, If you’ve found us useful, please do consider telling your friends about it. All you have to do is send these quotes on WhatsApp and ask them to subscribe to us.