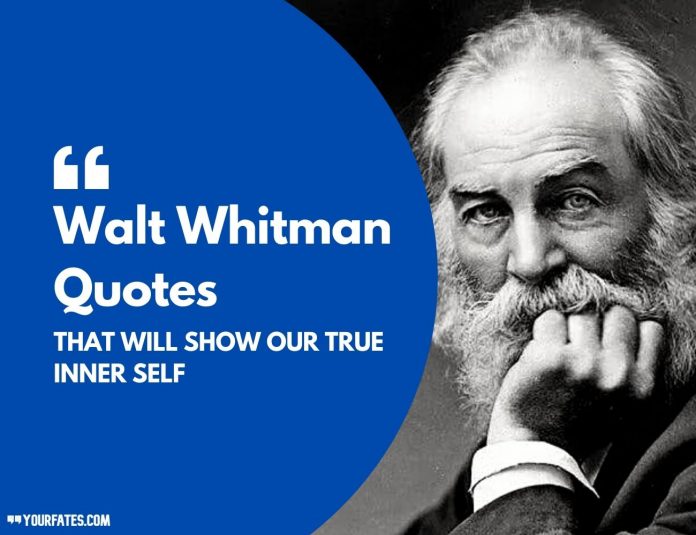 “And as to me, I know nothing else but miracles.”

Walt Whitman was one of the most modern poets with the most curative sense of ideas and meaning that have shaped the world we live in. He was called a humanist poet. Walt Whitman Quotes and sayings will make you feel who you are and will make you meet your true inner self.

He was one of the most innovative poets and essayists in America. His most famous collection is called ‘Leaves of grass’. This collection is now considered a landmark in the history of English Literature. Whitman grew up in a modest family and started to support them from a young age. He stepped into journalism and became a great poet. And from there, he never looked back and started to impact people’s life with his work and words.

Whitman was the first ‘poet of democracy’. He backed women property rights, immigration, and other labor issues.  He speaks of the love and beauty of the human body. Today we have come up with Walt Whitman Quotes and Sayings which are iconic and splendid suitable for all age groups:

1. “The art of art, the glory of expression and the sunshine of the light of letters, is simplicity.” – Walt Whitman

2. “When one reaches out to help another he touches the face of God.” – Walt Whitman

3. “Afoot and lighthearted I take to the open road, healthy, free, the world before me.” – Walt Whitman

4. “All I mark as my own you shall offset it with your own, else it were time lost listening to me.” – Walt Whitman

5. “Pointing to another world will never stop vice among us; shedding light over this world can alone help us.” – Walt Whitman 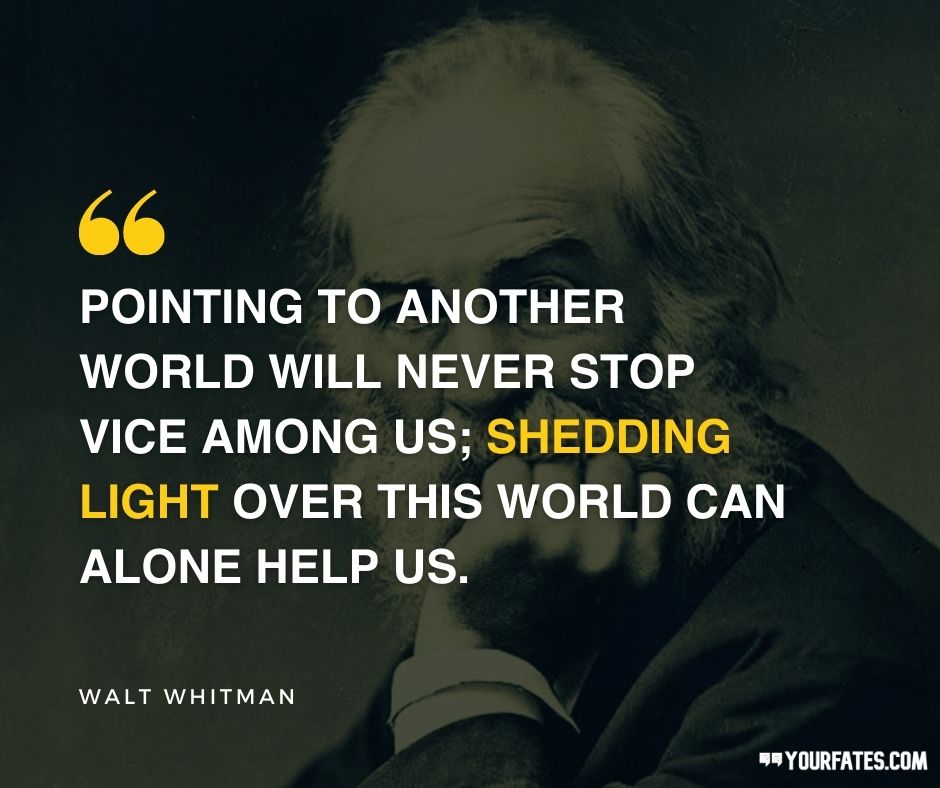 6. “The great city is that which has the greatest man or woman: if it be a few ragged huts, it is still the greatest city in the whole world.” – Walt Whitman

7. “Behold I do not give lectures or a little charity, when I give I give myself.” – Walt Whitman

9. “A writer can do nothing for men more necessary, satisfying, than just simply to reveal to them the infinite possibility of their own souls.” – Walt Whitman

10. “Happiness, not in another place but this place…not for another hour, but this hour.” – Walt Whitman

12. “From this hour, freedom! Going where I like, my own master…” – Walt Whitman

13. “I cannot be awake, for nothing looks to me as it did before, or else I am awake for the first time, and all before has been a mean sleep.” – Walt Whitman

14. “I no doubt deserved my enemies, but I don’t believe I deserved my friends.” – Walt Whitman

15. “To me, every hour of the day and night is an unspeakably perfect miracle.” – Walt Whitman 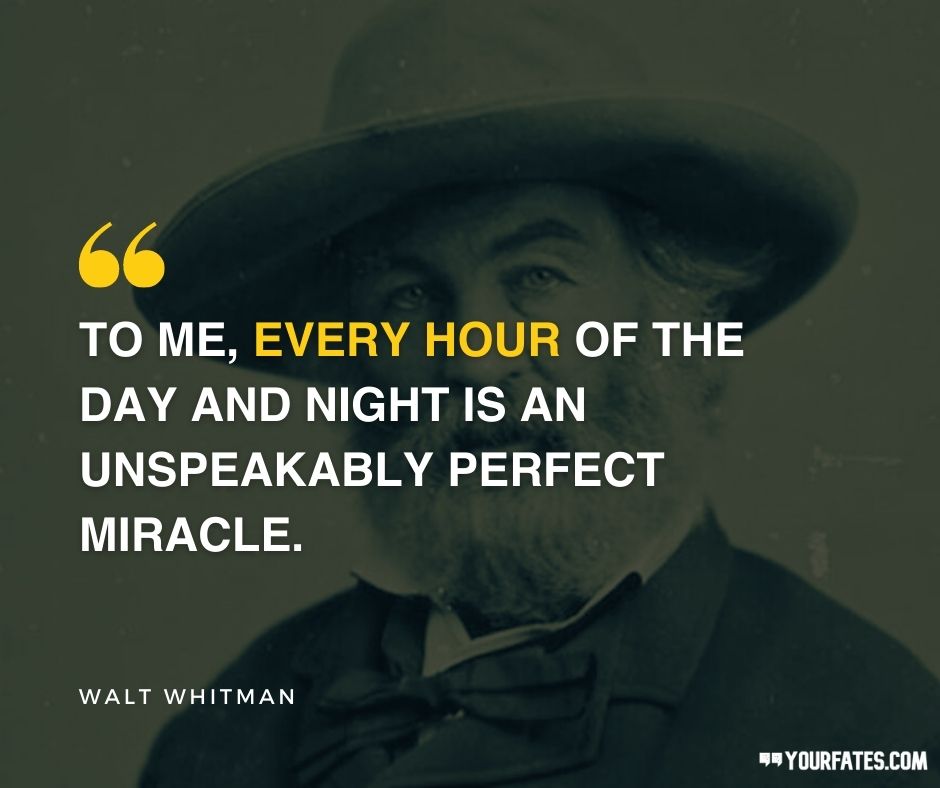 17. “The road to wisdom is paved with excess. The mark of a true writer is their ability to mystify the familiar and familiarize the strange.” – Walt Whitman

18. “The beauty of independence, departure, actions that rely on themselves.” – Walt Whitman

19. “In the confusion we stay with each other, happy to be together, speaking without uttering a single word.” – Walt Whitman

20. “Failing to fetch me at first keep encouraged, Missing me one place search another, I stop somewhere waiting for you.” – Walt Whitman

24. “Pointing to another world will never stop vice among us; shedding light over this world can alone help us.” – Walt Whitman

25. “Judging from the main portions of the history of the world, so far, justice is always in jeopardy.” – Walt Whitman

29. “Battles are lost in the same spirit in which they are won.” – Walt Whitman 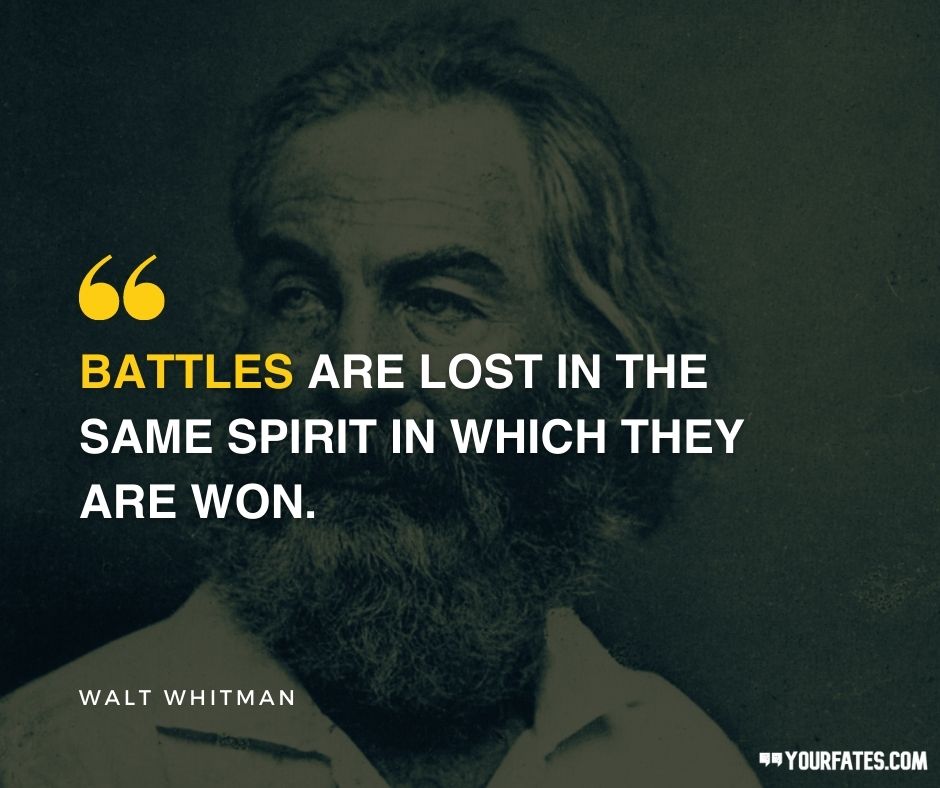 33. “All beauty comes from beautiful blood and a beautiful brain.” – Walt Whitman

34. “All architecture is what you do to it when you look upon it.” – Walt Whitman

35. “If you want me again look for me under your boot-soles.” – Walt Whitman

36. “Do not descend amongst professors or capitalists.” – Walt Whitman 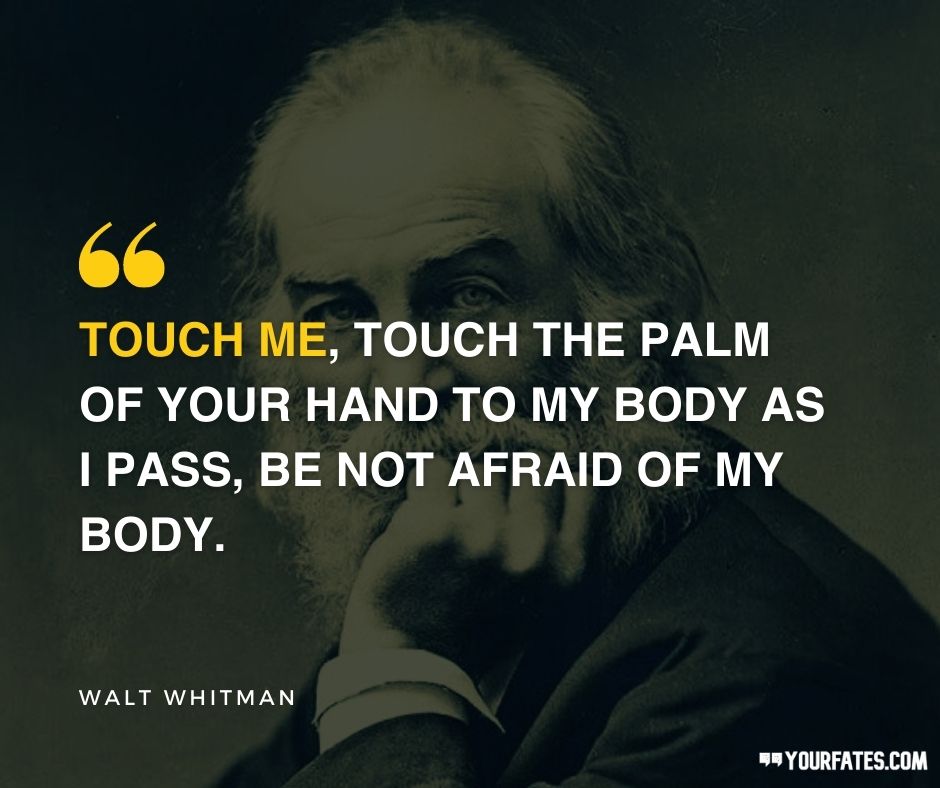 39. “Those who love each other shall become invincible.” – Walt Whitman

40. “The powerful play goes on and you may contribute a verse.” – Walt Whitman

41. “I am larger, better than I thought; I did not know I held so much goodness.” – Walt Whitman

44. “I think I will do nothing for a long time but listen, and accrue what I hear into myself…and let sound contribute toward me.” – Walt Whitman

45. “I will You, in all, Myself, with promise to never desert you, to which I sign my name.” – Walt Whitman

46. “And whoever walks a furlong without sympathy walks to his own funeral drest in his shroud.” – Walt Whitman

47. “Keep your face always toward the sunshine – and shadows will fall behind you.” – Walt Whitman

49. “You must habit yourself to the dazzle of the light and of every moment of your life.” – Walt Whitman 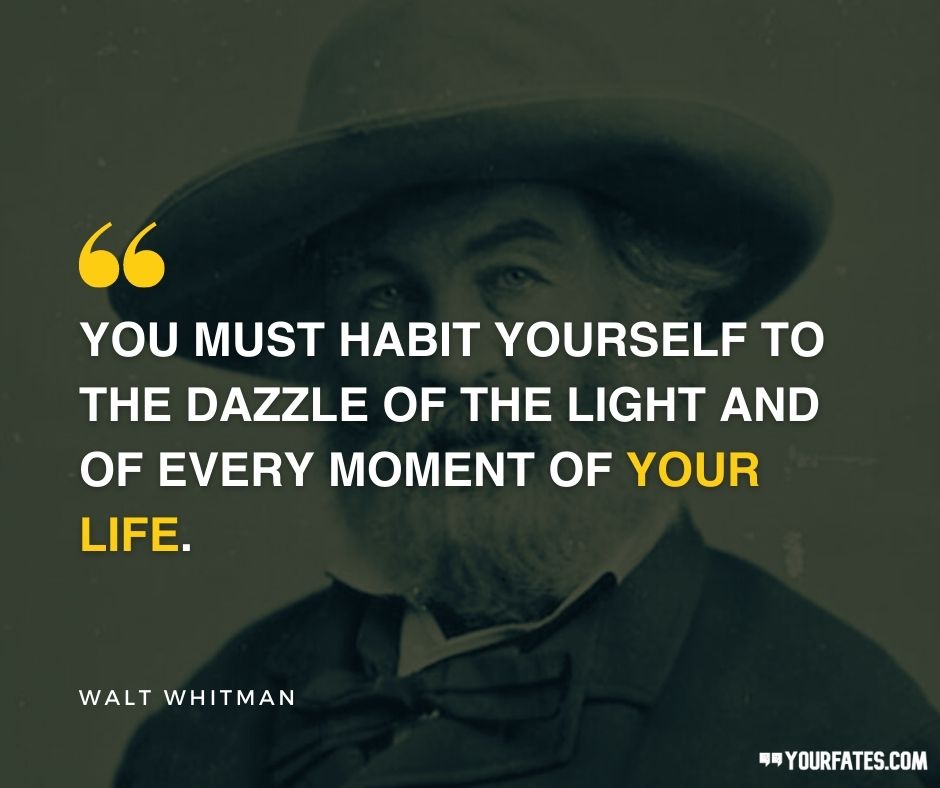 50. “Re-examine all you have been told. Dismiss what insults your soul.” – Walt Whitman

51. “I discover myself on the verge of a usual mistake.” – Walt Whitman

52. “Nothing can happen more beautiful than death.” – Walt Whitman

53. “What is that you express in your eyes? It seems to me more than all the print I have read in my life.” – Walt Whitman

54. “Either define the moment or the moment will define you.” – Walt Whitman

55. “The clock indicates the moment… but what does eternity indicate?” – Walt Whitman

56. “The truth is simple. If it was complicated, everyone would understand it.” – Walt Whitman 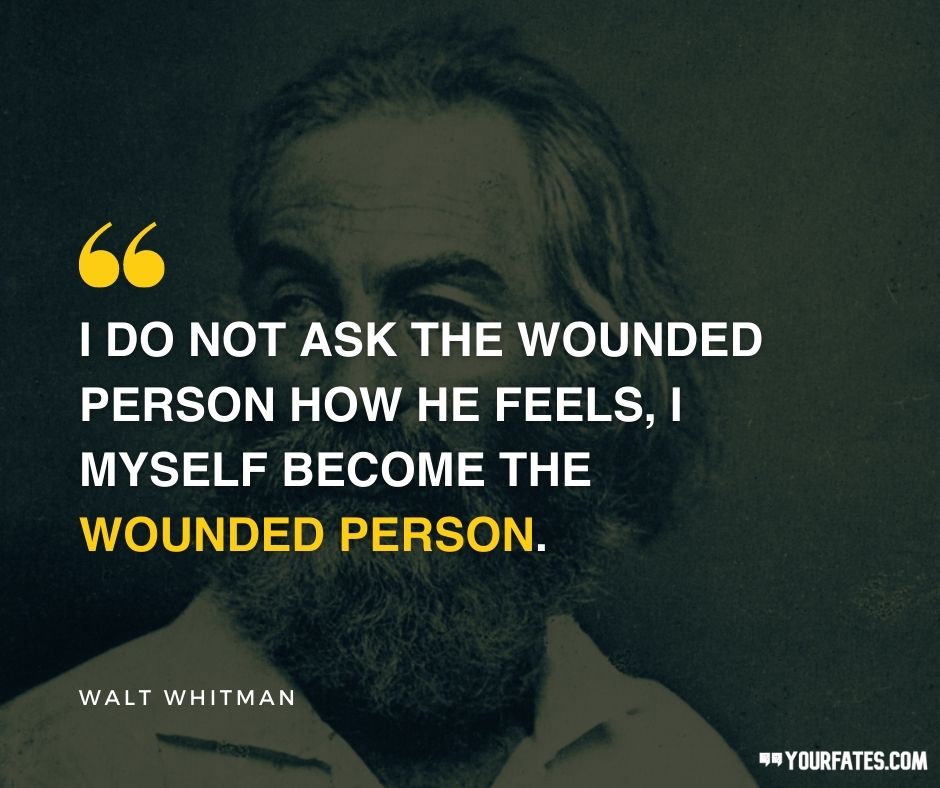 58. “I hear and behold God in every object, yet understand God not in the least.” – Walt Whitman

59. “The future is no more uncertain than the present.” – Walt Whitman

60. “The strongest and sweetest songs yet remain to be sung.” – Walt Whitman

61. “Me imperturbe, standing at ease in Nature, Master of all or Mistress of all…” – Walt Whitman

62. “I believe a leaf of grass is no less than the journey work of the stars.” – Walt Whitman

63. “I resist anything better than my own diversity, And breathe the air and leave plenty after me.” – Walt Whitman 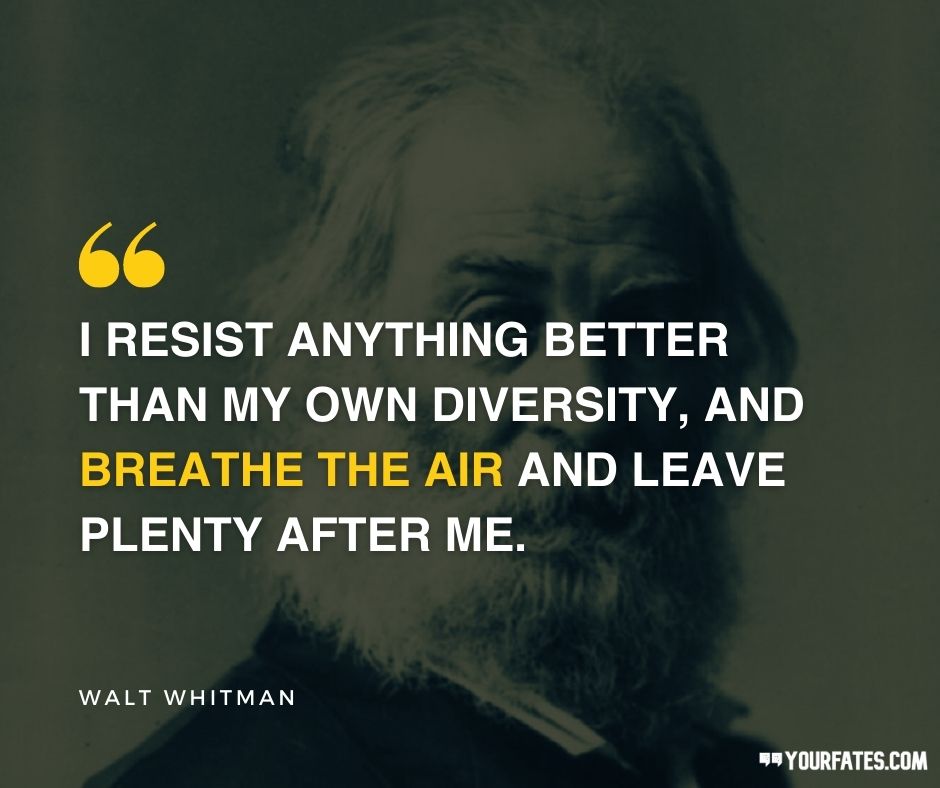 64. “I hear the bravuras of birds… the bustle of growing wheat… gossip of flames… clack of sticks cooking my meals.” – Walt Whitman

65. “A child said What is the grass? fetching it to me with full hands; How could I answer the child? I do not know what it is any more than he.” – Walt Whitman

66. “Love the earth and sun and animals. Despise riches, give alms to everyone that asks.” – Walt Whitman

67. “O harsh surrounding cloud that will not free my soul.” – Walt Whitman

68. “Let your soul stand cool and composed before a million universes.” – Walt Whitman

69. “After you have exhausted what there is in business, politics, conviviality, and so on – have found that none of these finally satisfy, or permanently wear – what remains? Nature remains.” – Walt Whitman

70. “And I say there is nothing greater than the mother of men.” – Walt Whitman

If you are excited to read his poems then start with Leaves of Grass which contains only 12 poems. It would be great for a beginner reader. This book has gotten the attention of many great poets.

We hope you like these collections of Walt Whitman Quotes. Also, If you’ve found us useful, please do consider telling your friends about it. All you have to do is send these quotes on WhatsApp and ask them to subscribe to us.

Bhagavad Gita Quotes By Lord Krishna on Life and Success That...

Long Distance Relationship Quotes To Help You In Understanding Each Other

God Quotes That Will Make You Believe in God

45 Greatest Arnold Schwarzenegger Quotes To Inspire You to Never Surrender