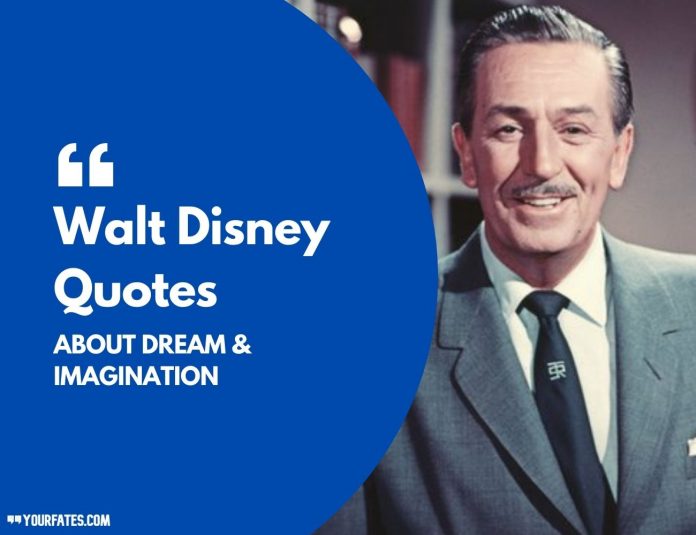 “All our dreams can come true if we have the courage to pursue them.”

Dream is very powerful elements in everyone’s life. For most people, dreams are what keeps them moving forward in a disciplined manner. Only because we quit pursuing our dreams do half of our dreams not come true. If we have the guts and persistence to pursue our dreams relentlessly, they can all come true. Walt Disney, the originator of Disney World, and the character Mickey Mouse, which we all fondly remember from our childhood days, was the first prominent personalities that showed the world to dream and turn them into reality. His words and quotes are still an inspiration for billions of people worldwide who work hard to make their dreams come true.

Walter Elias Disney was born in Chicago, Illinois, on December 5, 1901, to Flora (née Call) and Elias Disney, a Canadian-born farmer, and businessman. During World War I, he pretended to be 16 years old in order to join the American Red Cross. With his work as a cartoonist and animator, Walt Disney was not only a pioneer in the American film industry but also a visionary entrepreneur. He developed an entertainment business with his brother Roy that gave joy to children and adults all over the world. Walt Disney’s quotes and sayings continue to inspire people across the geographical boundaries around the world even now.

Let’s get started with some of the most powerful Walt Disney quotes about dreams and imagination that show us what it takes to make your dreams come true.

Walt Disney was without a doubt a dreamer. All his inventions and creative works were much ahead of his time, ushering in a fresh new form of entertainment never considered before. As he stated, Disneyland will never be constructed, thus his dream will not be thwarted. We are sure you would just fall in love with this collection of Walt Disney quotes about dreams and imagination if you’re a dreamer yourself.

We hope you like these collections of Walt Disney Quotes. Also, If you’ve found us useful, please do consider telling your friends about it. All you have to do is send these quotes on WhatsApp and ask them to subscribe to us.