40 Tom Cruise Quotes To Fuel Your Mind With Positive Vibes 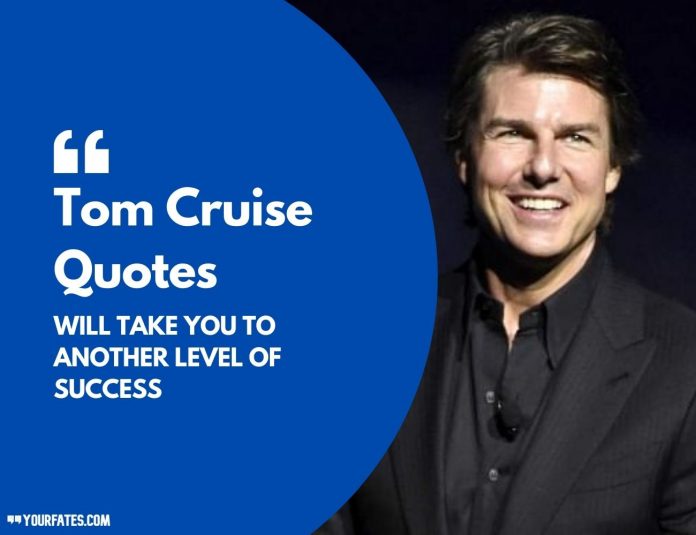 Thomas Cruise Mapother IV is an American actor and Film producer whose debut film was the romantic drama Endless Love. He is one of the highest-paid actors across the world and also most popularly known for his clean-cut looks and versatility. We have brought you this amazing collection of Tom Cruise Quotes that will take you to another level of success.

There are certain Top Tucker Hit Movies which we wouldn’t have missed watching in our childhood days. We would have watched those kinds of movies several times. One of those favorite movies would be MISSION IMPOSSIBLE. We wouldn’t have missed it. We all love his stunts and terrifying performance on the screen.

In his 40 years of career, he had done at least 72 films and among those many got featured and received many awards for his acting. “Risky Business” got first nominated for the Golden Globe Award for Best Actor. He has received dozens of awards in various positions.

He is best known for his stunts and hard work never giving up attitude. He had done the craziest adrenaline junk stunts with injuries and even risked his life for his fans like Hanging on a plane, diving into an underwater vault, halo jump, helicopter chase, and many more.

His net worth is estimated as $600 million. He has spread his caring wings and supported 12 charities and 15 causes like Orphans, Disaster relief, AIDS, and many more.

Tom Cruise trained for an entire year to get one perfect stunt in Mission: Impossible 7. He had 500 skydiving sessions and did 13000 motorbike jumps. This shows his dedication and love for his work.

We have come up with inspirational and motivational Tom Cruise Quotes to fuel your mind with positive vibes.

“I never stop learning. And knowing when and where to communicate, I think that’s important.” – Tom Cruise 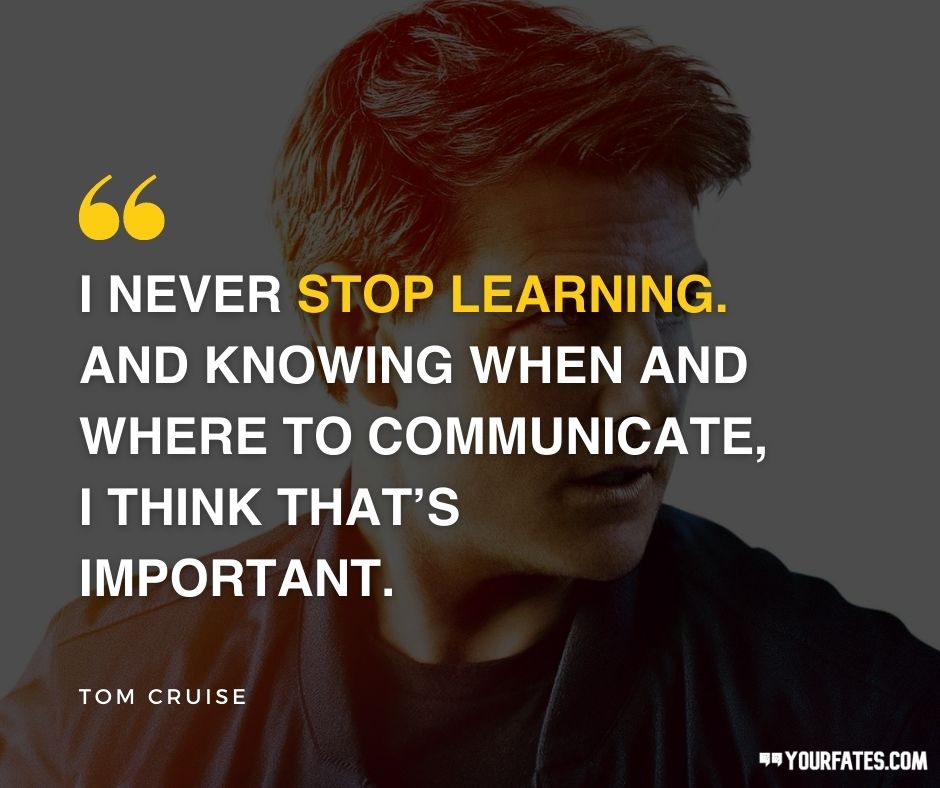 “I had to train myself to focus my attention. I became very visual and learned how to create mental images in order to comprehend what I read.” – Tom Cruise

“We just rolled up a snowball and threw it into Hell. Now we’ll see if it has a chance.” – Tom Cruise

“I want to live a real life… I don’t want to dream any longer.” – Tom Cruise

“I don’t play games. I’m very straight about how I feel about things. I like intimacy when I’m into my woman.” – Tom Cruise 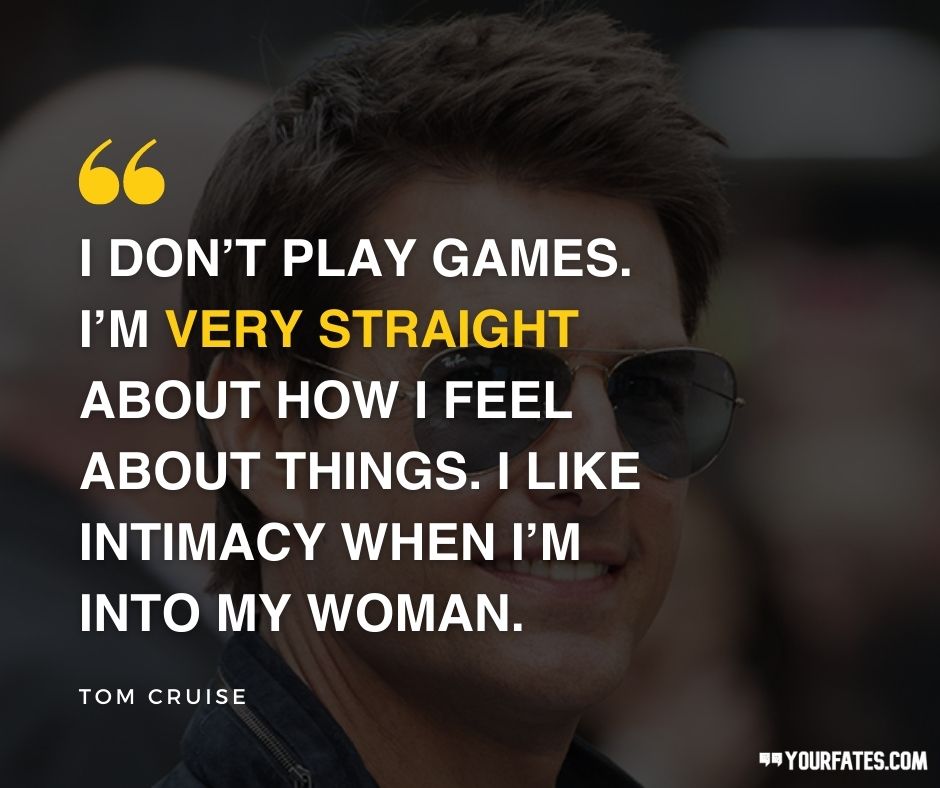 “The exciting part of acting, I don’t know how else to explain it, are those moments when you surprise yourself.” – Tom Cruise

“I always look for a challenge and something that’s different.” – Tom Cruise

“I don’t care who you are, life has challenges.” – Tom Cruise 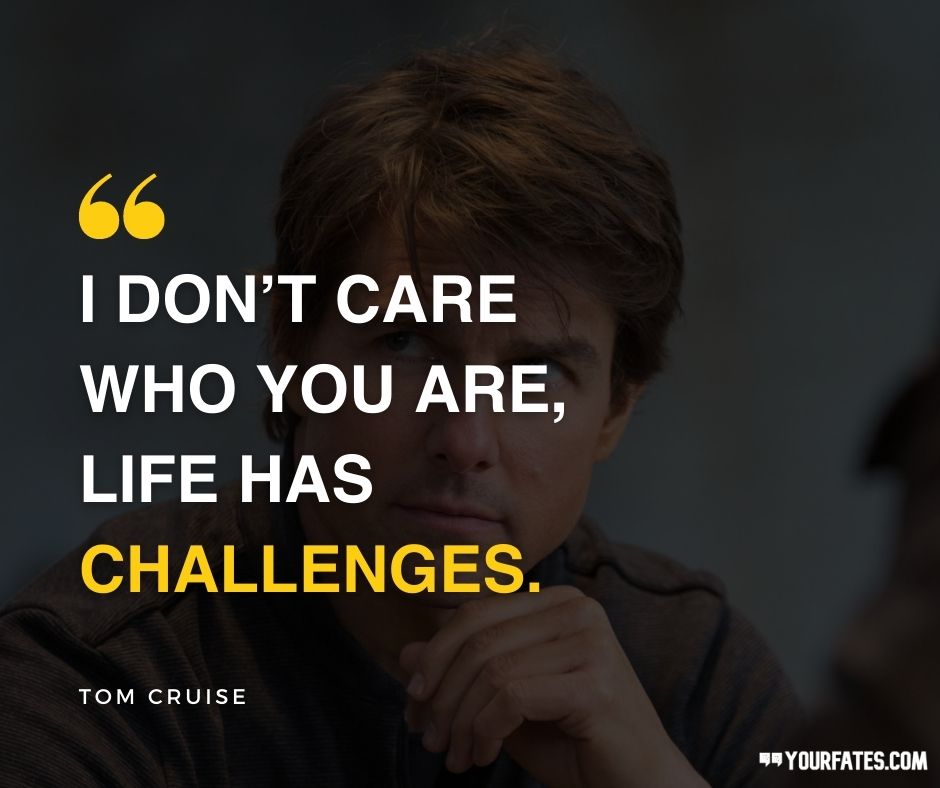 “When you have to cope with a lot of problems, you’re either going to sink or you’re going to swim.” – Tom Cruise

“I have cooked turkeys in my day but when Mom`s around I let her do it.” – Tom Cruise

“Everybody dies, Sally. The thing is to die well.” – Tom Cruise 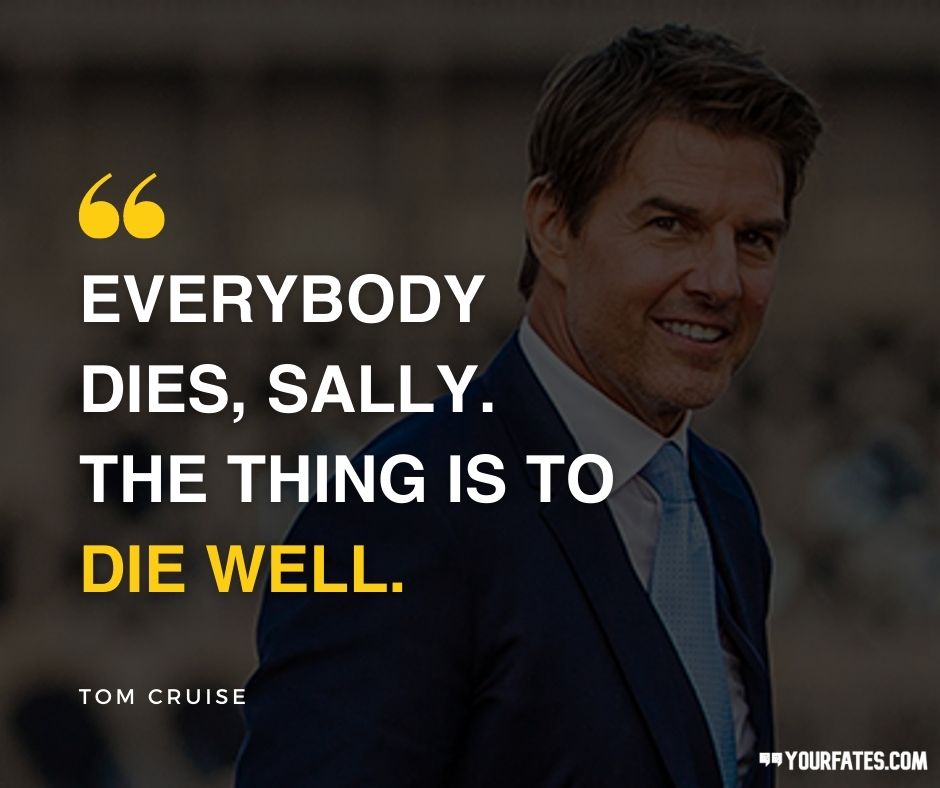 “Whether it’s making a film or raising my children, personally I’m striving to do the right things and to learn.” – Tom Cruise

“I’ve never done work for money ever. If your choices are based on grosses and the film doesn’t do well, what does that mean? It leaves you with nothing.” – Tom Cruise

“I don’t hide from cameras or anything. It doesn’t bother me. I don’t seek our press for the women I’m dating, but if it finds me, it finds me.” – Tom Cruise 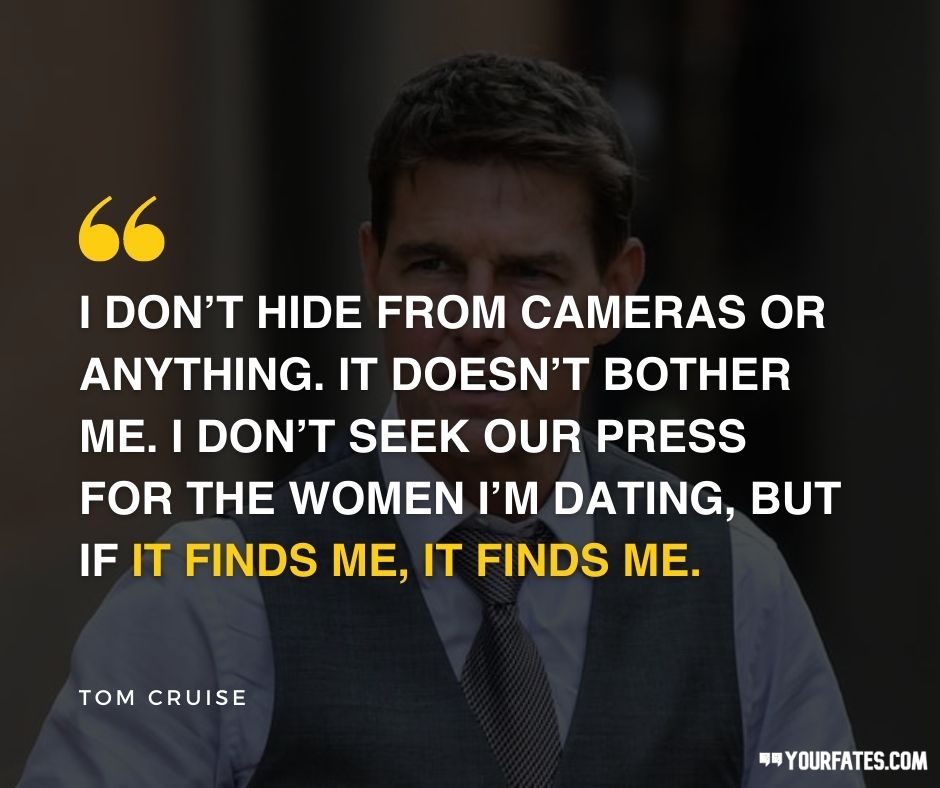 “Nothing ends nicely, that’s why it ends.” – Tom Cruise 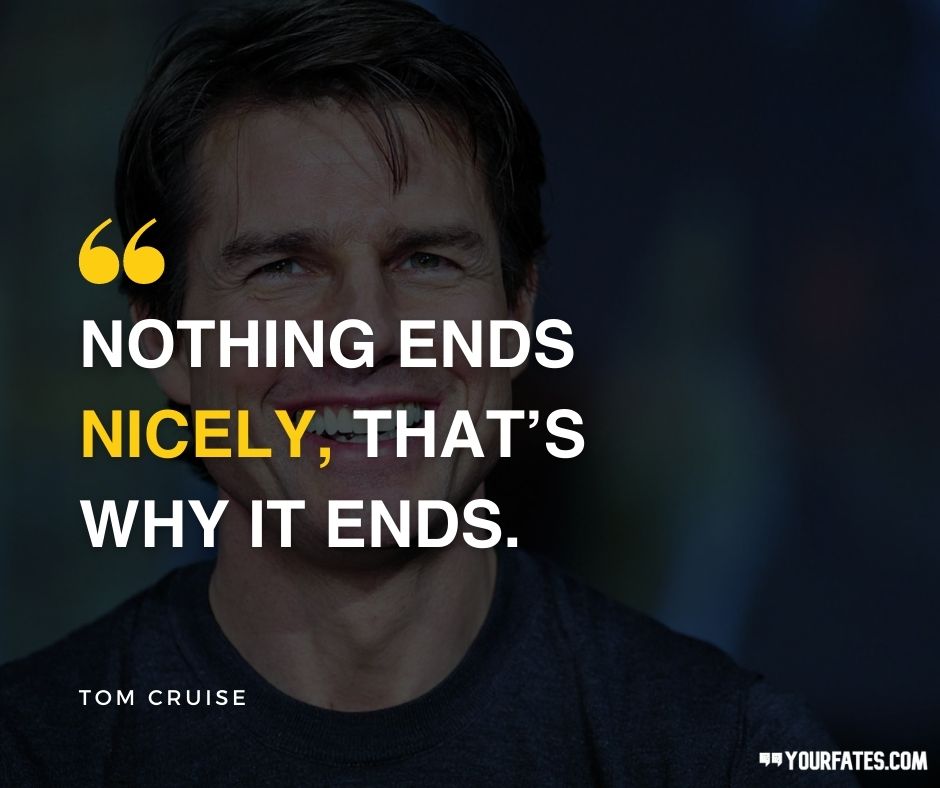 “I’m a good listener, I think it’s the one characteristic that’s most important.” – Tom Cruise

“I disagree with people who think you learn more from getting beat up than you do from winning.” – Tom Cruise

“I feel lonely at times, but I don’t want to get into a relationship with someone if it is not right. I’m not the type of person who just does things to do them.” – Tom Cruise

“I love what I do. I take great pride in what I do. And I can’t do something halfway, three-quarters, nine-tenths. If I’m going to do something, I go all the way.” – Tom Cruise

“I like to work with people that I like hanging out with, that I admire, that are really smart and talented, and we can problem solve together.” – Tom Cruise 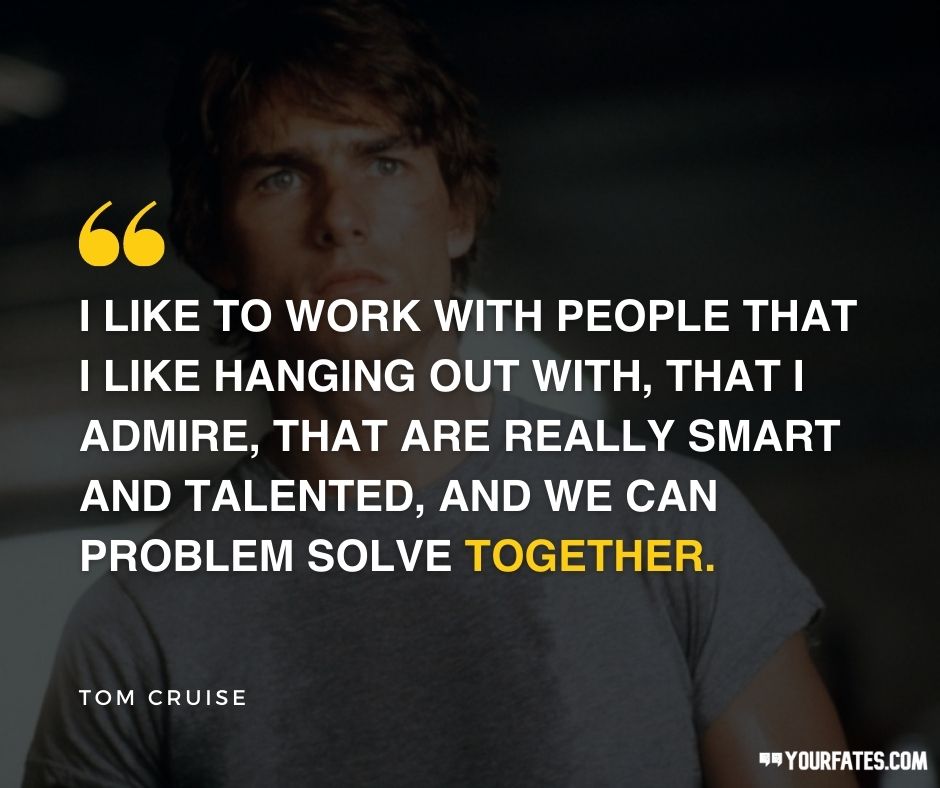 “The important thing is to be relaxed in your work. Same in life. Don’t make everything too intense. Then you can let everything go and not ‘act’.” Tom Cruise

“I’ve had such extremes in my life. From being this kind of wild kid, to one year studying to be a Franciscan priest at the seminary – I was very frustrated.” – Tom Cruise 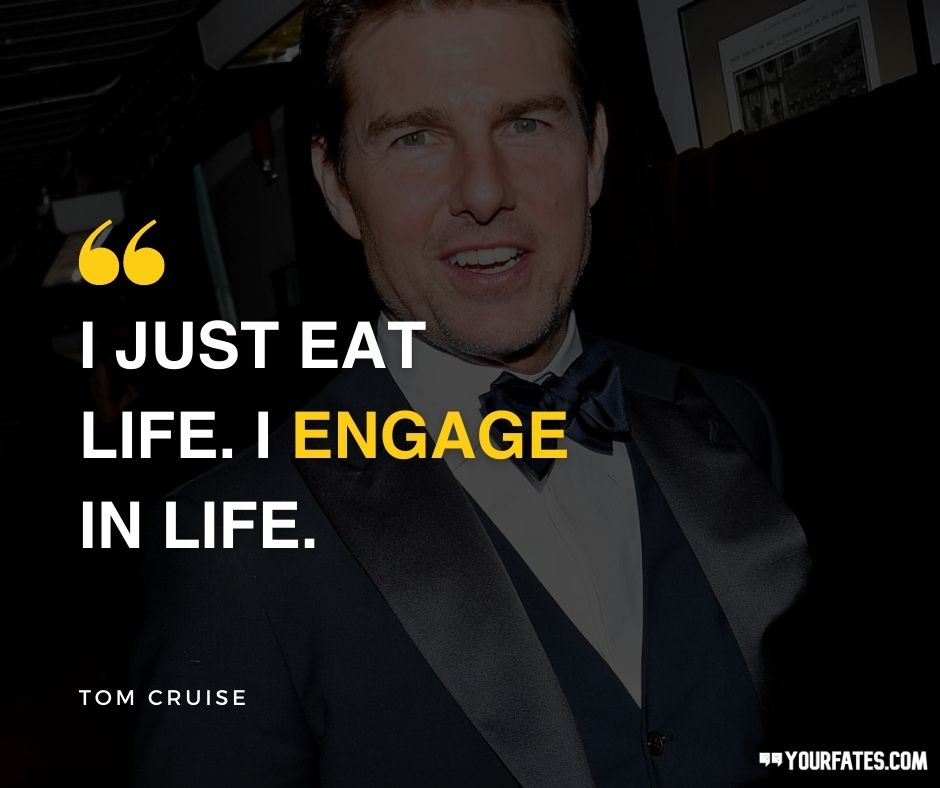 “I love kids. I was a kid myself, once.” Tom Cruise

“I’ve spent many birthdays on a movie set, all great days.” – Tom Cruise 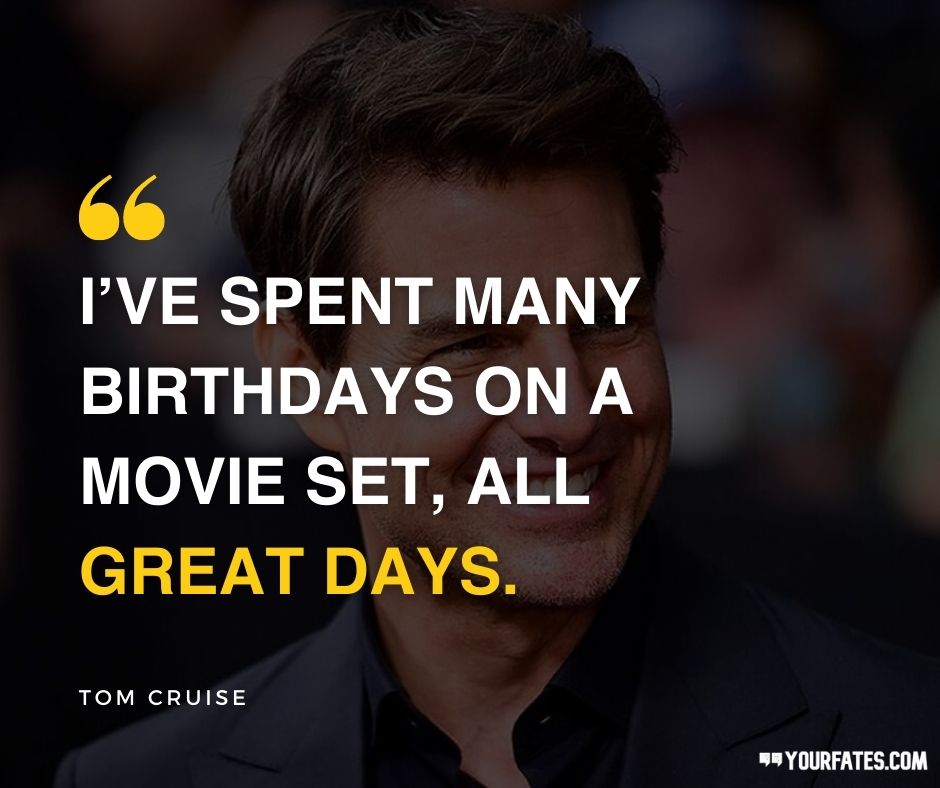 “Here’s how I’ve lived my life: I’ve never been late to a set. I make films I believe in. I feel privileged to be able to do what I love.” – Tom Cruise

“Talk is over-rated as a means of settling disputes.” – Tom Cruise 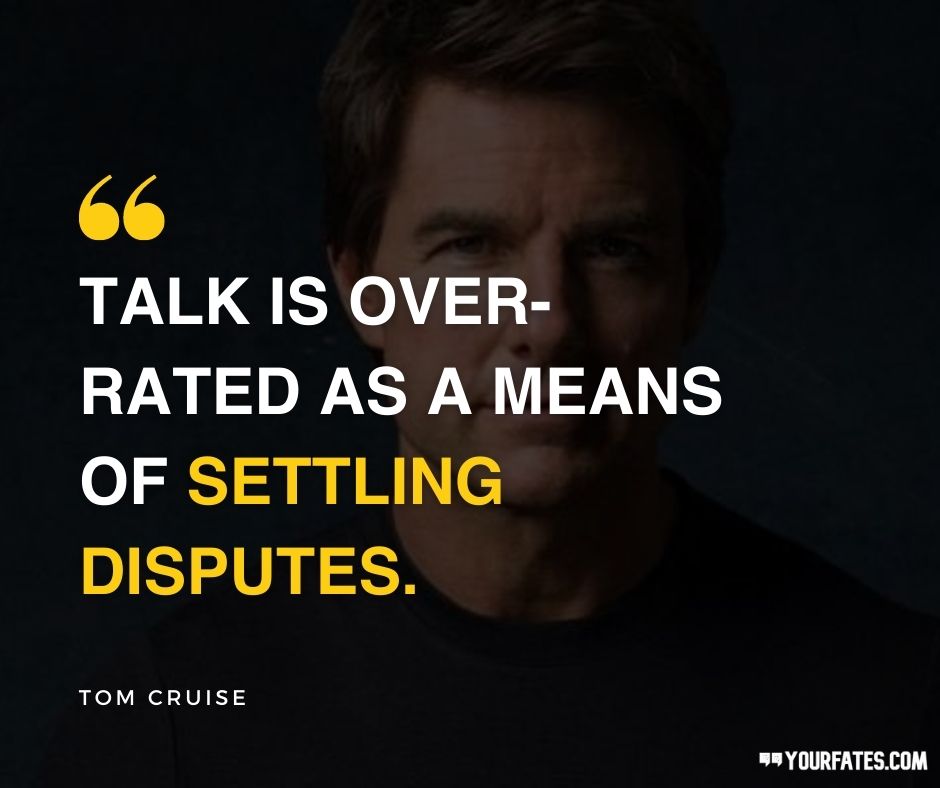 “There is Life in every breath.” – Tom Cruise

“I’ve always had the same values. Family for me has always been important. When I shoot, everybody comes.” – Tom Cruise

“When you become successful in any type of life, there are people who are not contributing to the motion.” – Tom Cruise

“I go without sleep, I just go hard.” – Tom Cruise 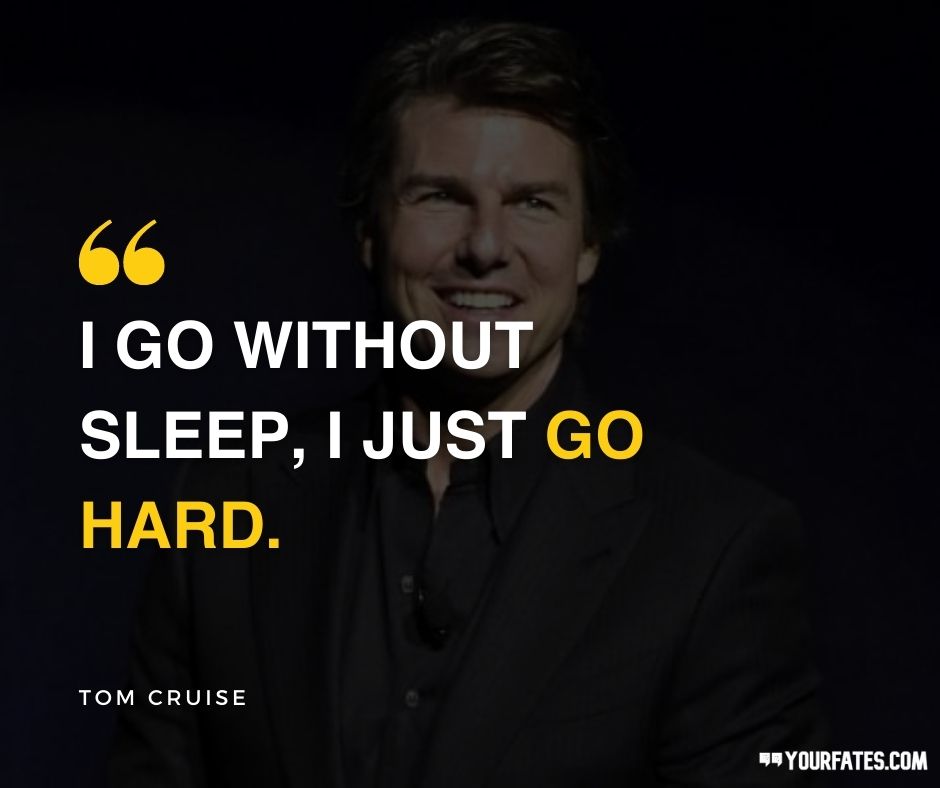 “Individuals have to decide what is true and real for them.” – Tom Cruise

If you are a person who loves sci-fi and action drama movies then don’t miss his movies which will be splendid. If you haven’t watched his movie add it to your watchlist. We have come up with some of all-time best movies of him – Edge Of Tomorrow, A Few Good Men, Top Gun, Risky Business, Mission Impossible: Fall Out.

We hope you like these collections of Tom Cruise Quotes and Sayings. Also, If you’ve found us useful, please do consider telling your friends about it. All you have to do is send these quotes on WhatsApp and ask them to subscribe to us.