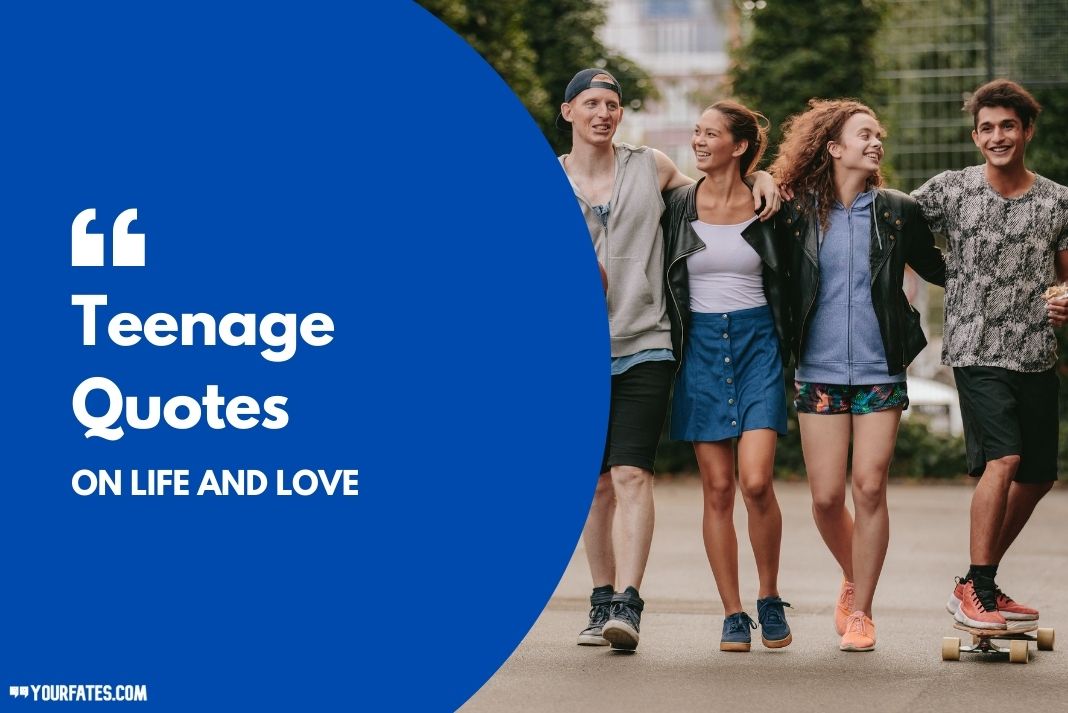 “Telling a teenager the facts of life is like giving a fish a bath” – Arnold H. Glasow

Everyone has a story of life and  Teenage is the most fascinating chapter of the story. It has all the fun – love, friendship, climax, suspense, and many lessons to learn. We have brought this amazing collection of Teenage Quotes by great authors and philosophers that you will relate to.

Teenage is a beautiful age.  We feel the liveliest in this age and start to see the world through different angles.

The biggest pleasure of being a teenager is “We start dreaming.” We believe everything to be possible and thus start thinking of heights!

Every success story starts with the idea of doing something great that was established in teenagers. Being a teenager seems fascinating. In the beginning, the thought is so satisfying that we are no longer children.  Friendships and love take up place at the top of our priority list.

Well! No doubt teenager is the age that teaches us the hardest lessons.

Age  13-19 – we meet so many people, consume stuff all around us, try to understand the world, get heartbreaks, have trust issues and make our own philosophies. Let’s jump onto these famous teenage quotes now.

Learn from these teenage quotes and apply them to make your teenage the best part of your life.

1. “We must not allow other people’s limited perceptions to define us.” – Virginia Satir

2. “Take care not to listen to anyone who tells you what you can and can’t be in life.” – Meg Medina 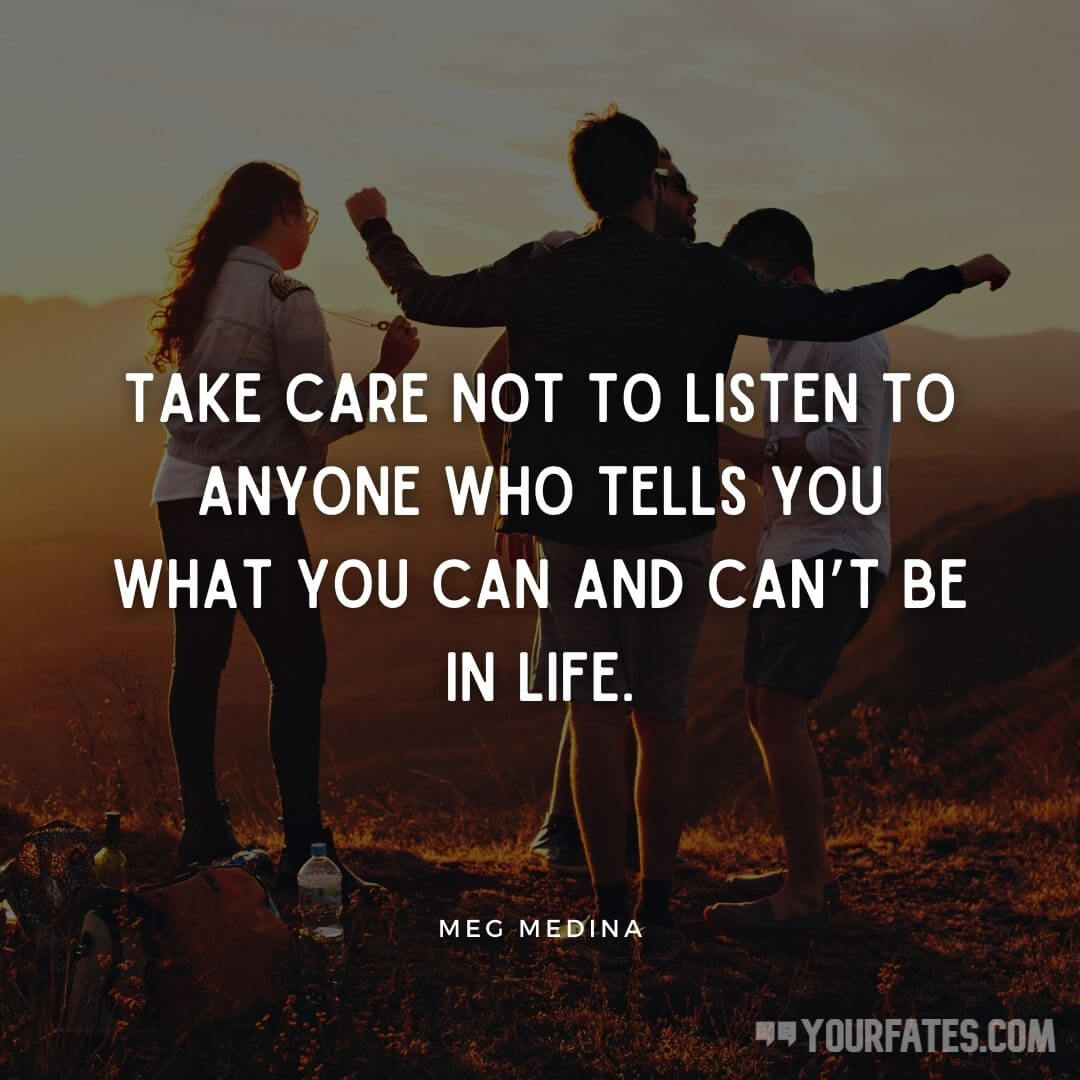 3. “No other version, no matter how perfect it is, would ever feel better than being your true self.” – Edmond Mbiaka

4. “Imperfection is beauty, madness is genius, and it’s better to be absolutely ridiculous than absolutely boring.” – Marilyn Monroe

5. “Do not fear to be eccentric in opinion, for every opinion now accepted was once eccentric.” – Bertrand Russell

6. “I think everybody’s weird. We should all celebrate our individuality and not be embarrassed or ashamed of it.” – Johnny Depp

7. “Don’t compromise even if it hurts to be yourself.” – Toby Keith

8. “Never dull your shine for somebody else.” – Tyra Banks 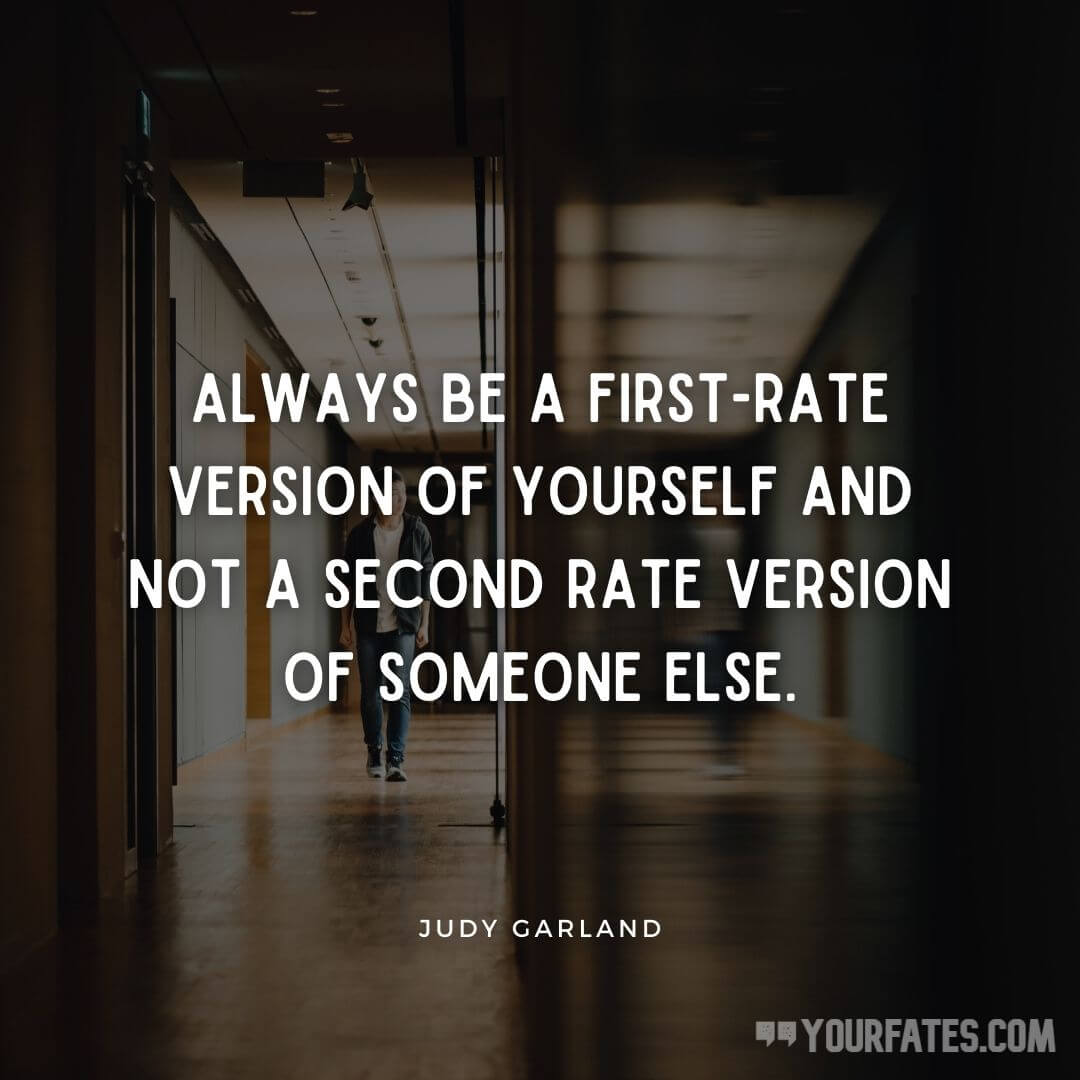 10. “With confidence, you have won before you have started.” – Marcus Garvey

11. “As a teenager, I was so insecure. I was the type of guy that never fitted in because he never dared to choose. I was convinced I had absolutely no talent at all. For nothing. And that thought took away all my ambition too.” – Johnny Depp

12. “My teenage years were exactly what they were supposed to be. Everybody has their own path. It’s laid out for you. It’s just up to you to walk it.” – Justin Timberlake

15. “I had teen angst for a while, but I think every teenager has the angst.” – Jamie Bell

16. “When I was in college, I wanted to be involved in things that would change the world.” – Elon Musk

17. “The youth need to be enabled to become job generators from job seekers.” – A. P. J. Abdul Kalam 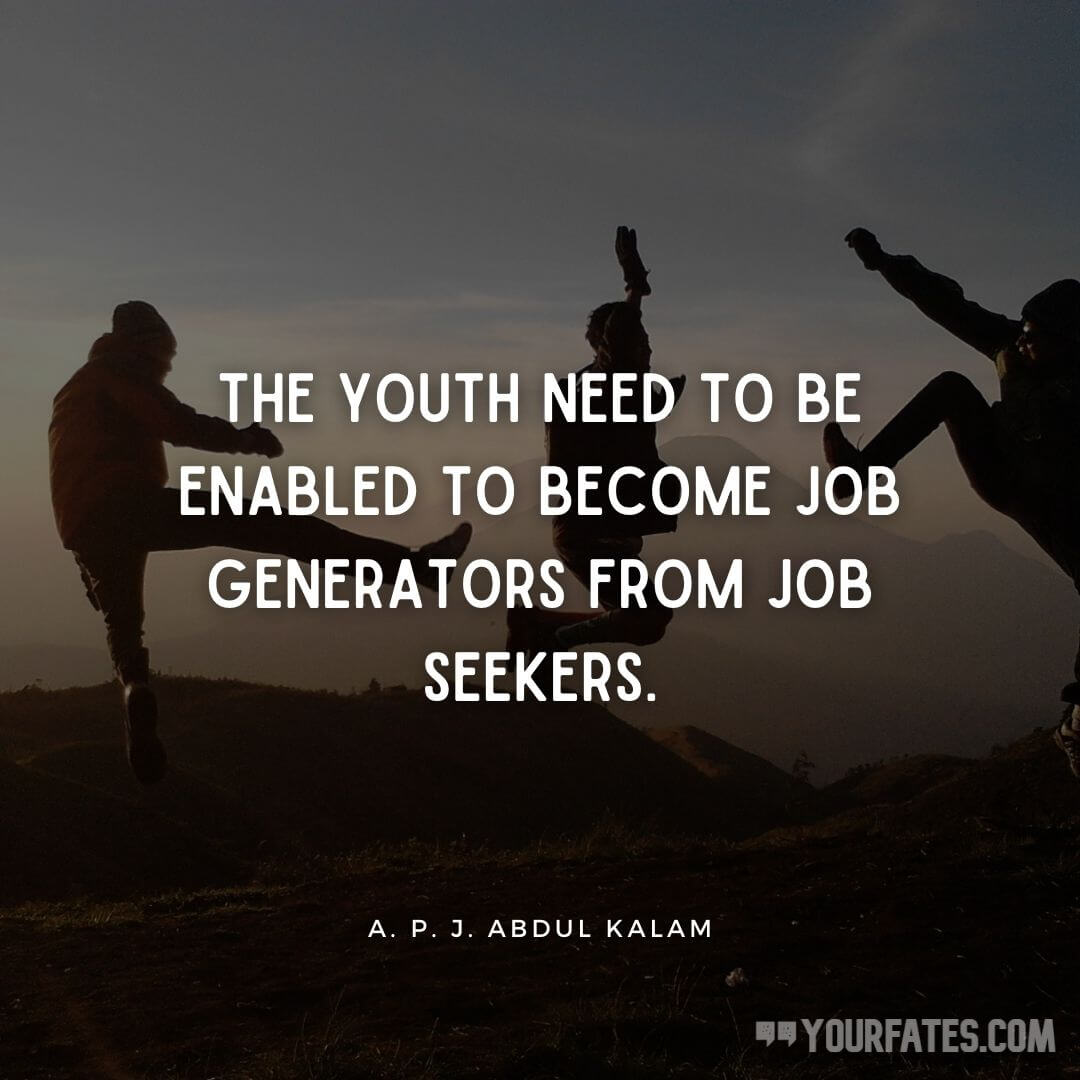 18. “Keep true to the dreams of your youth.” – Friedrich Schiller

19. “We never really grow up, we only learn how to act in public.” – Bryan White

20. “I have always had a sense that we are all pretty much alone in life, particularly in adolescence.” – Robert Cormier

21. “Children, even infants, are capable of sympathy. But only after adolescence are we capable of compassion.” – Louise J. Kaplan

22. “Don’t settle for being an option; become a priority.” – Matt Mitchell 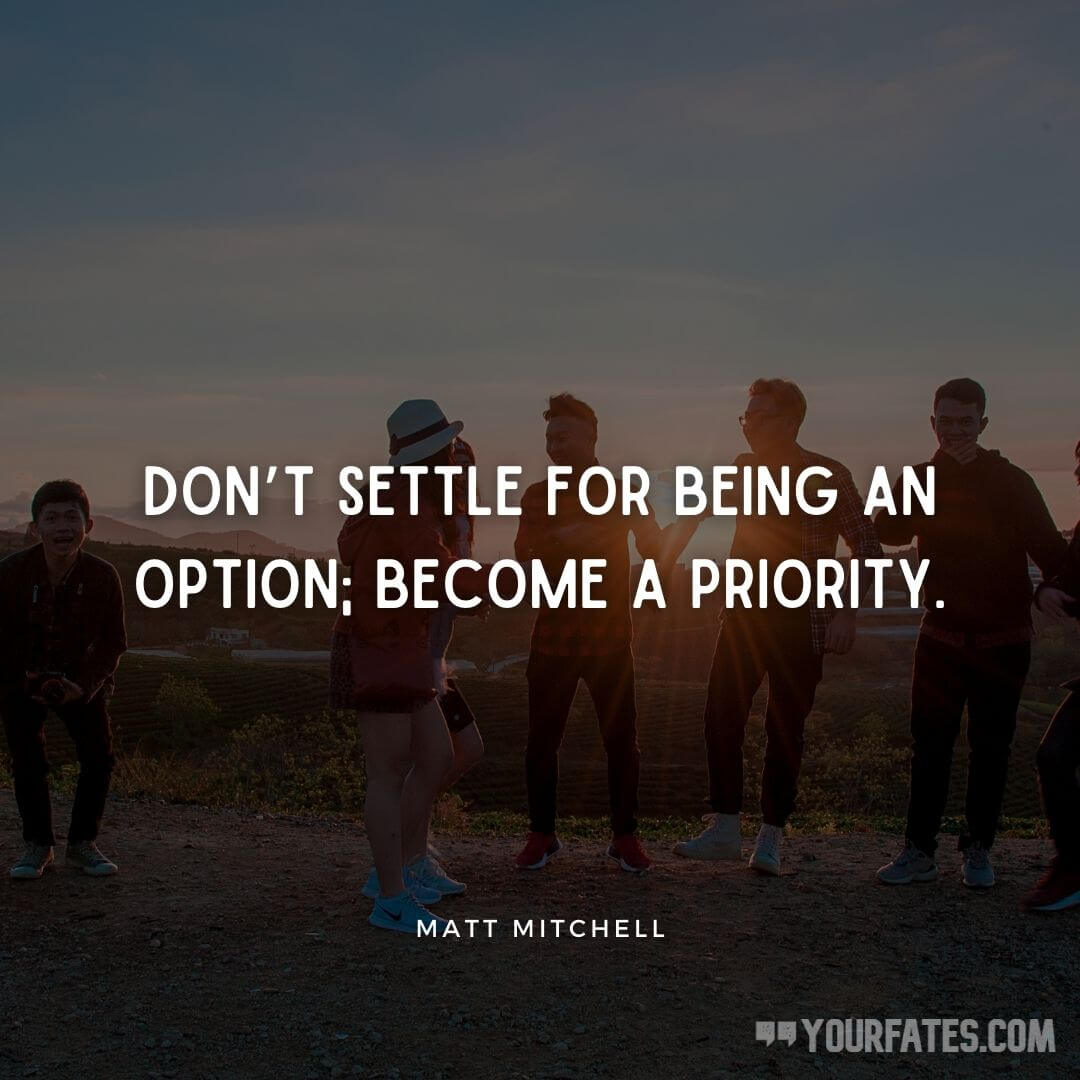 24. “Once you were a winner, you had to stay the winner they expected you to be.” – Joelle Charbonneau

26. “Youth comes but once in a lifetime.” – Henry Wadsworth Longfellow 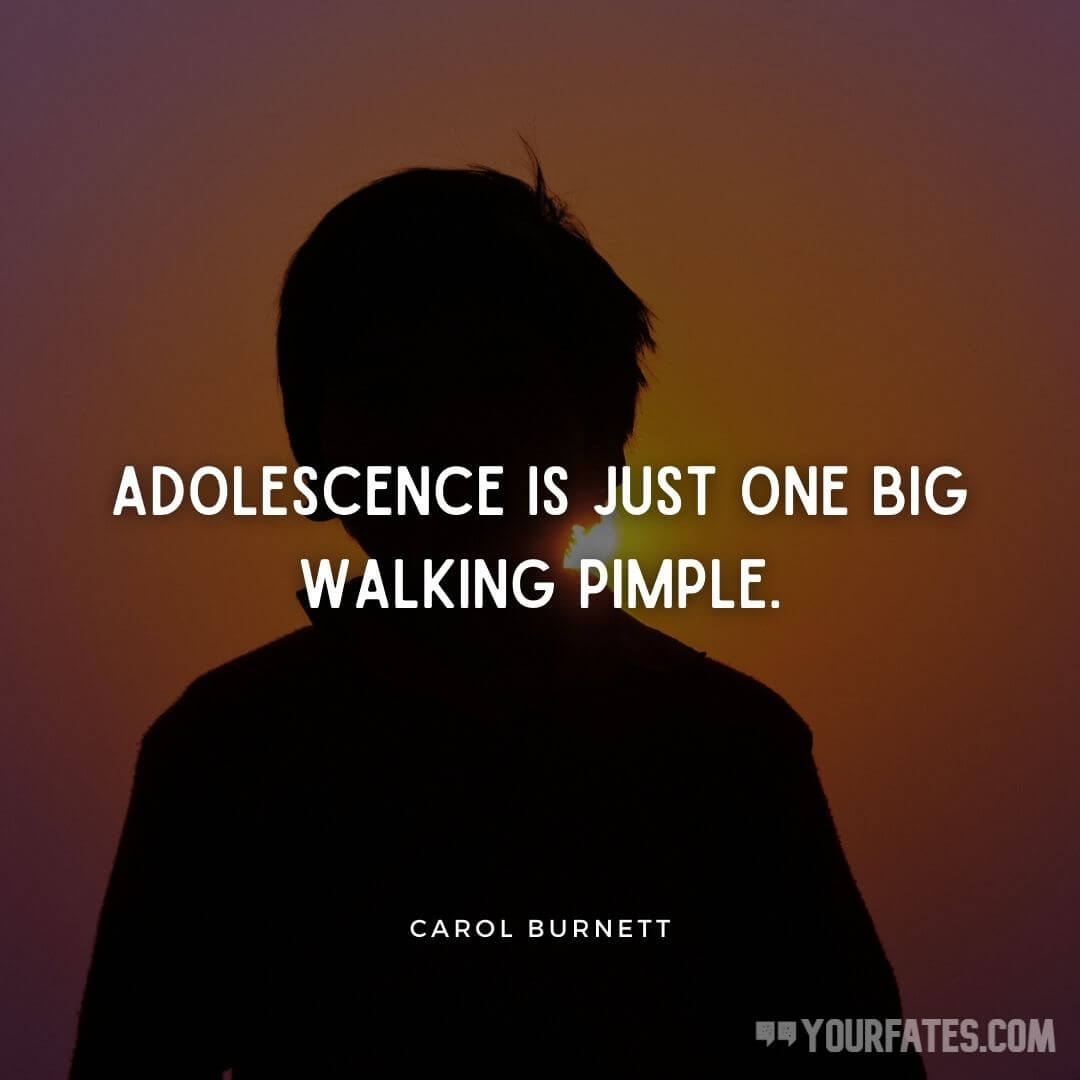 28. “As I’ve said many times, the single most oppressed class in America right now is the teenager.” – Joe Bob Briggs

29. “Adolescents are not monsters. They are just people trying to learn how to make it among the adults in the world, who are probably not so sure themselves.” – Virginia Satir

30. “Good habits formed at youth make all the difference.” – Aristotle

31. “Adolescence is the conjugator of childhood and adulthood.” – Louise J. Kaplan 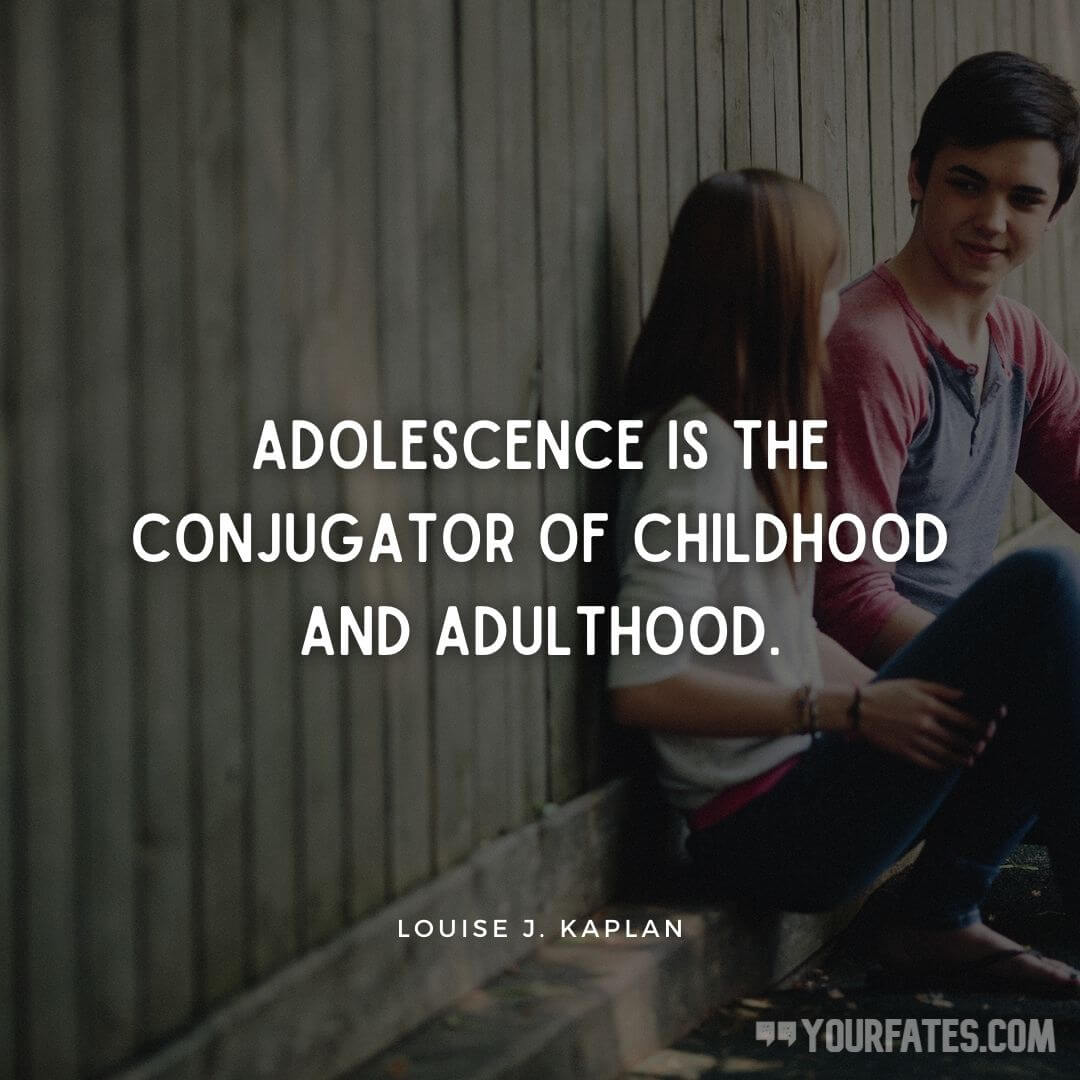 32. “The greatest things in life always come with a chance of great loss.” – Luke Edison

35. “Being classy is my teenage rebellion.”  – Rebecca McKinsey

36. “Life is a process during which one initially gets less and less dependent, independent, and then more and more dependent.”  – Mokokoma Mokhonoana

37. “Family and friends and faith are the most important things in your life and you should be building friendships.” – Barbara Bush

38. “First love is only a little foolishness and a lot of curiosity.” – George Bernard Shaw 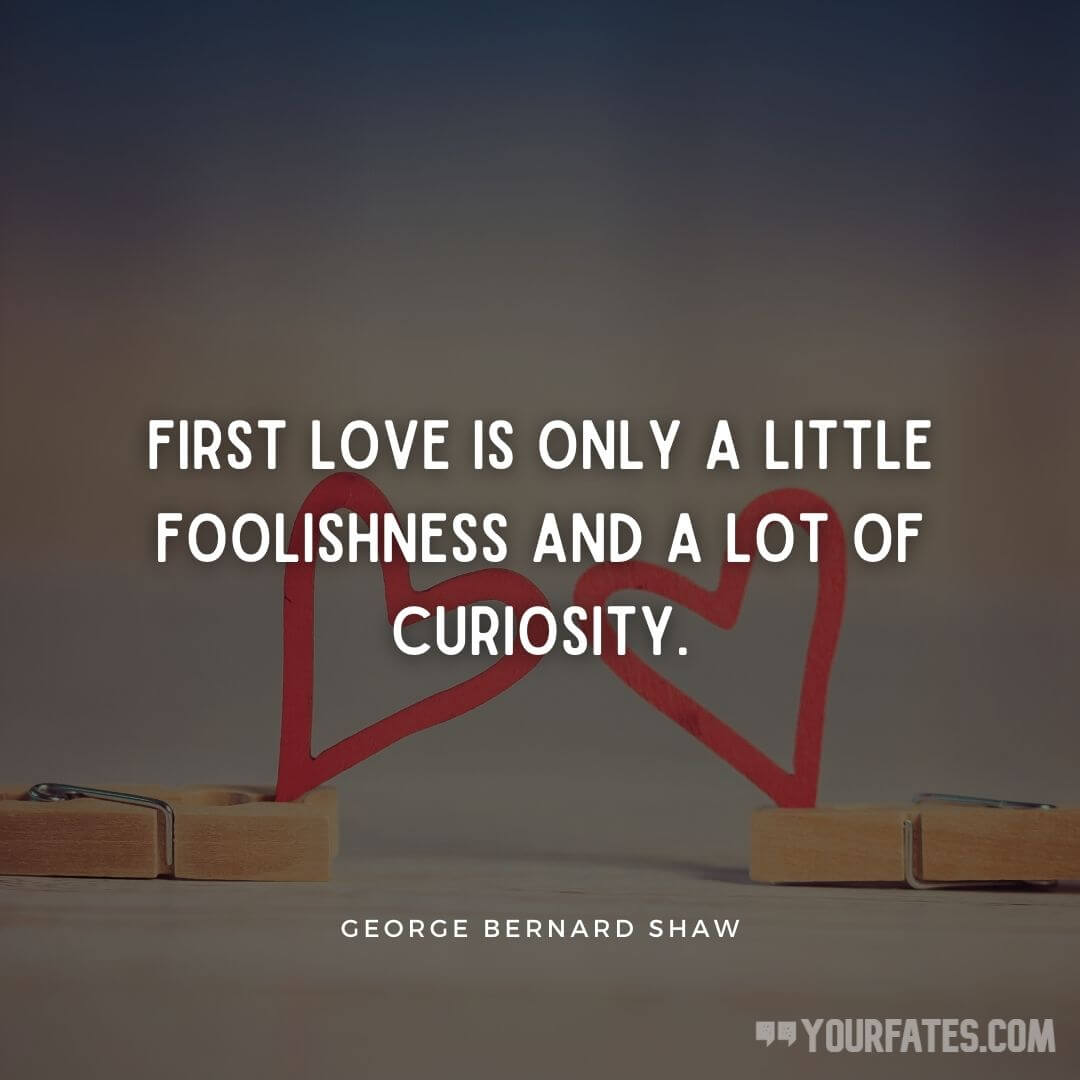 41. “It is better to love truly at seventeen than pretend at thirty.” – Rom Amor

42. “Young love is a flame; very pretty, often very hot and fierce, but still only light and flickering. The love of the older and disciplined heart is as coals, deep-burning, unquenchable.” – Henry Ward Beecher

43. “The little-unremembered acts of kindness and love are the best parts of a person’s life.” – William Wordsworth

44. “The minute I heard my first love story I started looking for you, not knowing how blind that was. Lovers don’t finally meet somewhere. They’re in each other all along.” – Jalal ad-Din Rumi 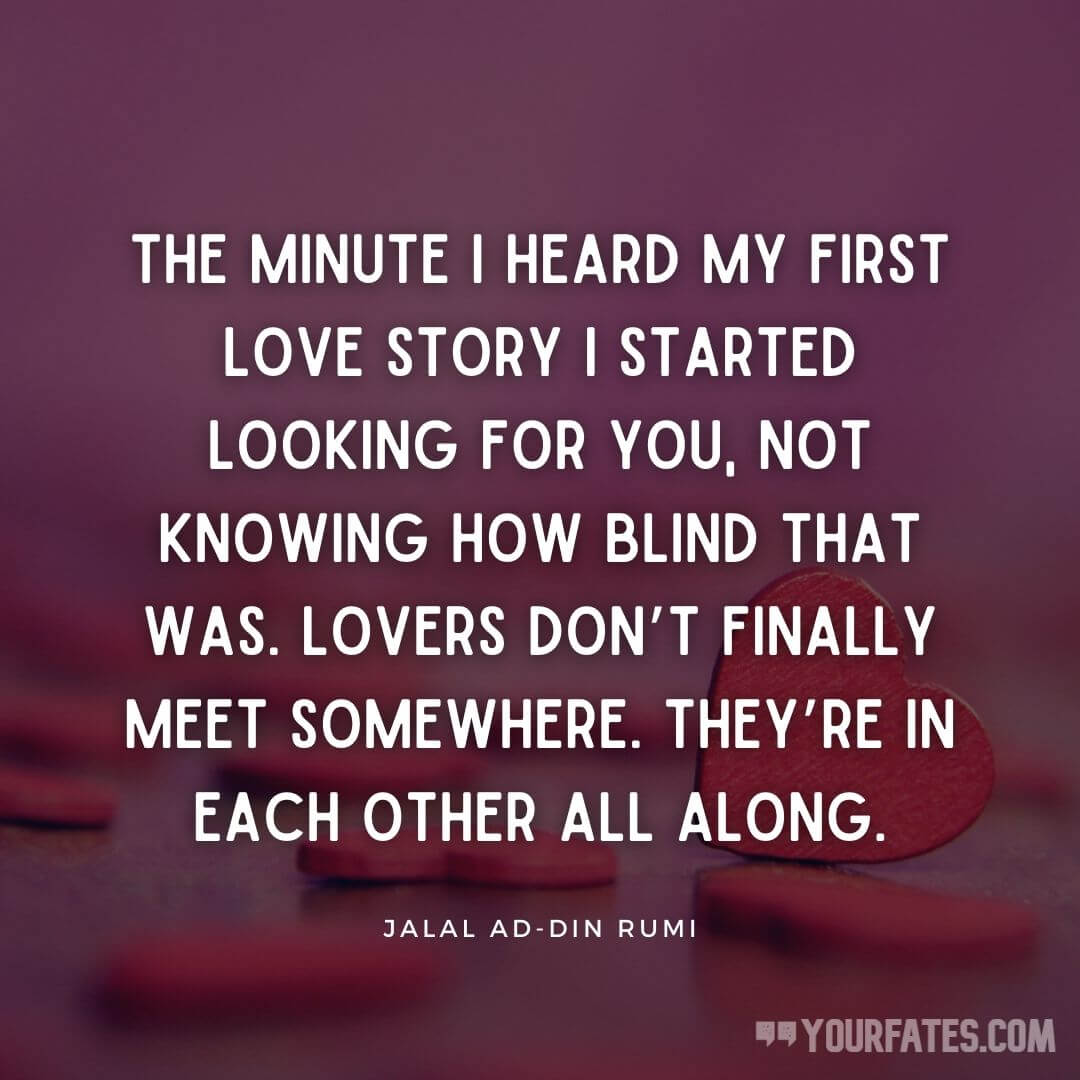 46. “The loss of young first love is so painful that it borders on the ludicrous.” – Maya Angelou

47. “Just thinking about you brings a smile to face, a twinkle to my eye, and a skipped beat to my heart.” – Ash Sweeney

48. “Love is missing someone whenever you’re apart, but somehow feeling warm inside because you’re close in heart.” – Kay Knudsen

49. “The magic of first love is our ignorance that it can ever end.” – Benjamin Disraeli

50. “I think everyone feels lost at times during their high school years.” – Linda Cardellini 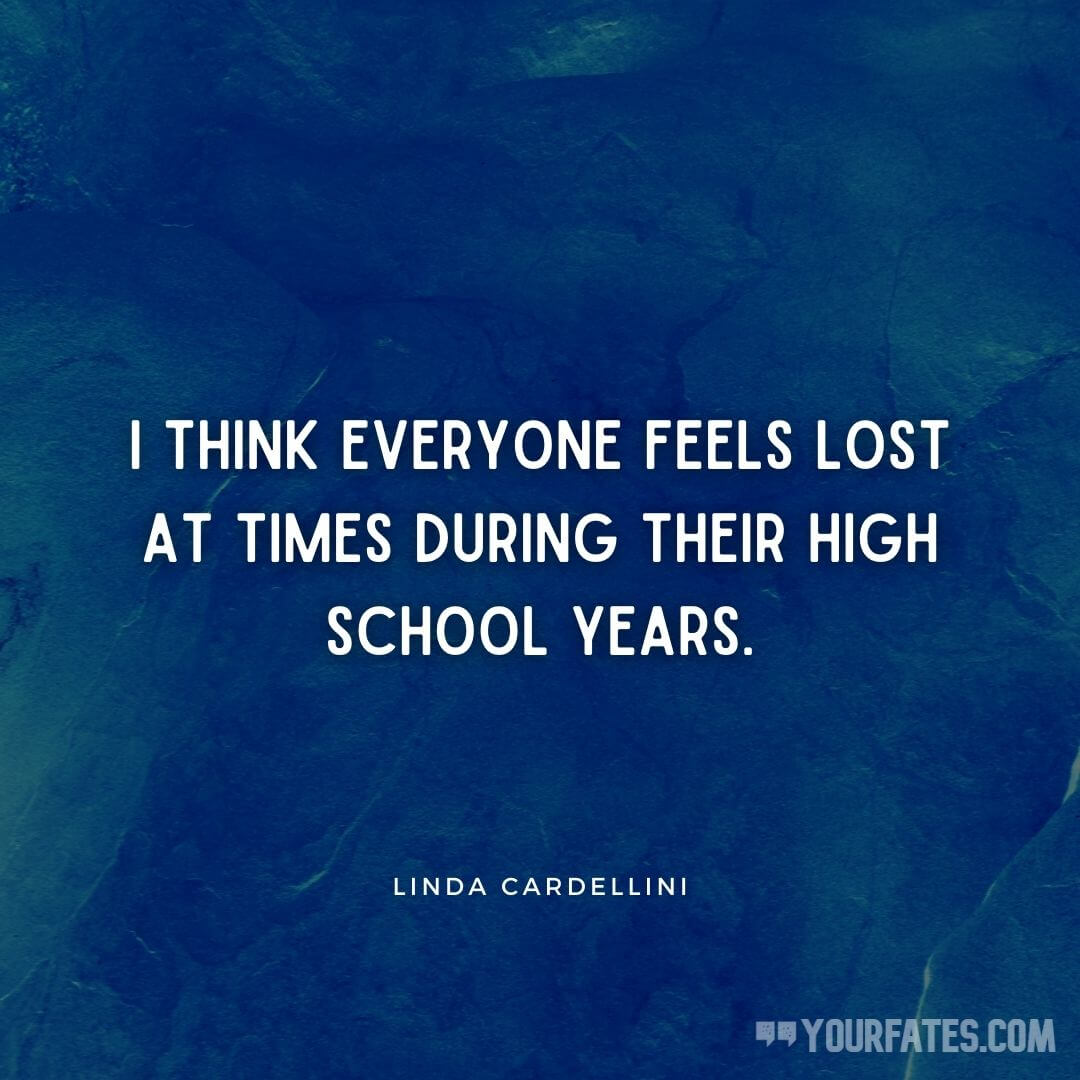 52. “High school will always be a drama zone. It takes the strongest and smartest to know how to avoid it.” – Mia Lugo

53. “Like its politicians and its wars, society has the teenagers it deserves.” – J.B. Priestley

55. “I have this sense that I didn’t really start growing up until my twenties.” – Winona Ryder

56. “So many people try to grow up too fast, and it’s not fun! You should stay a kid as long as possible!” – Vanessa Hudgens 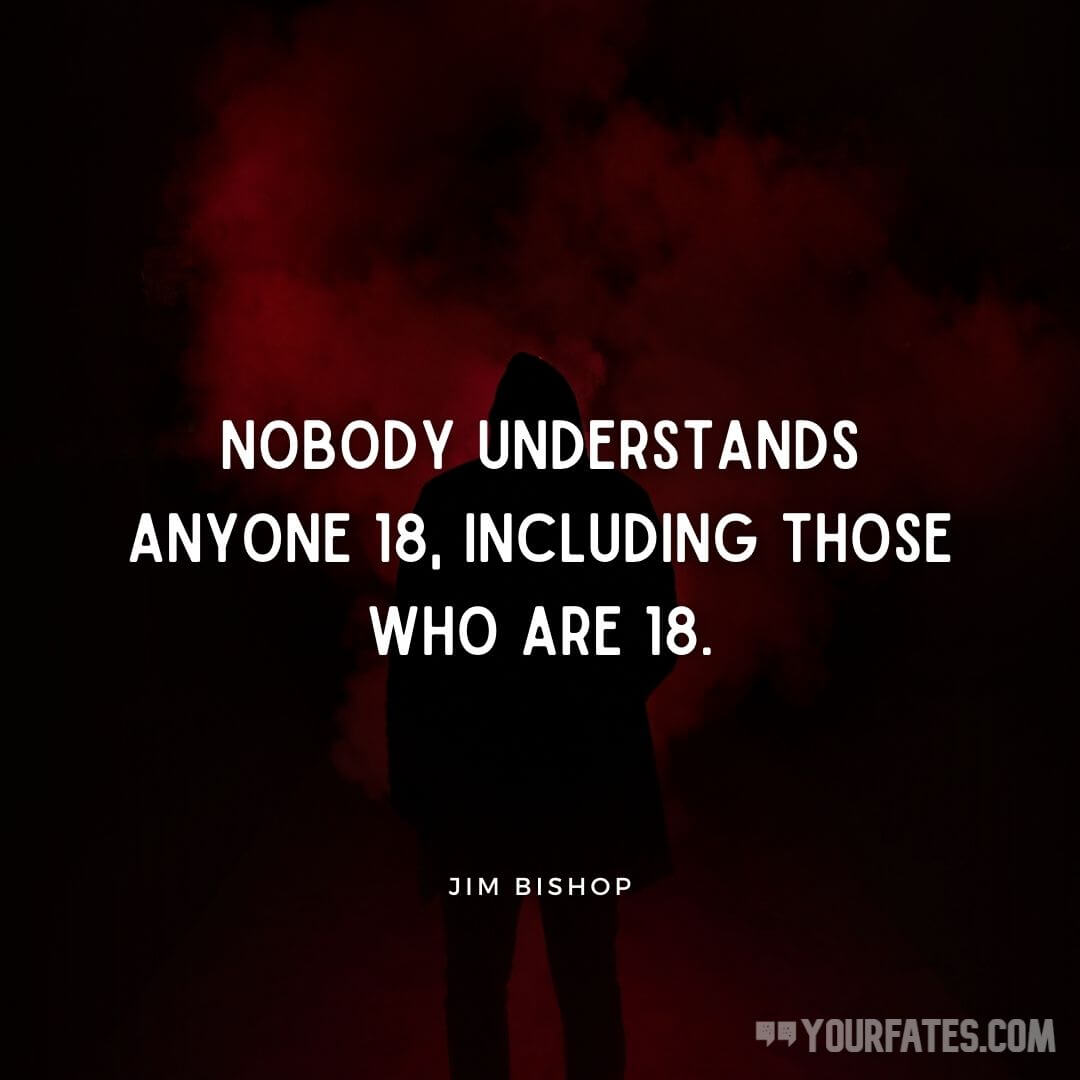 58. “Time misspent in youth is sometimes all the freedom one ever has.” – Anita Brookner

59. “I was a quiet teenager, introverted, full of angst.” – Nigella Lawson 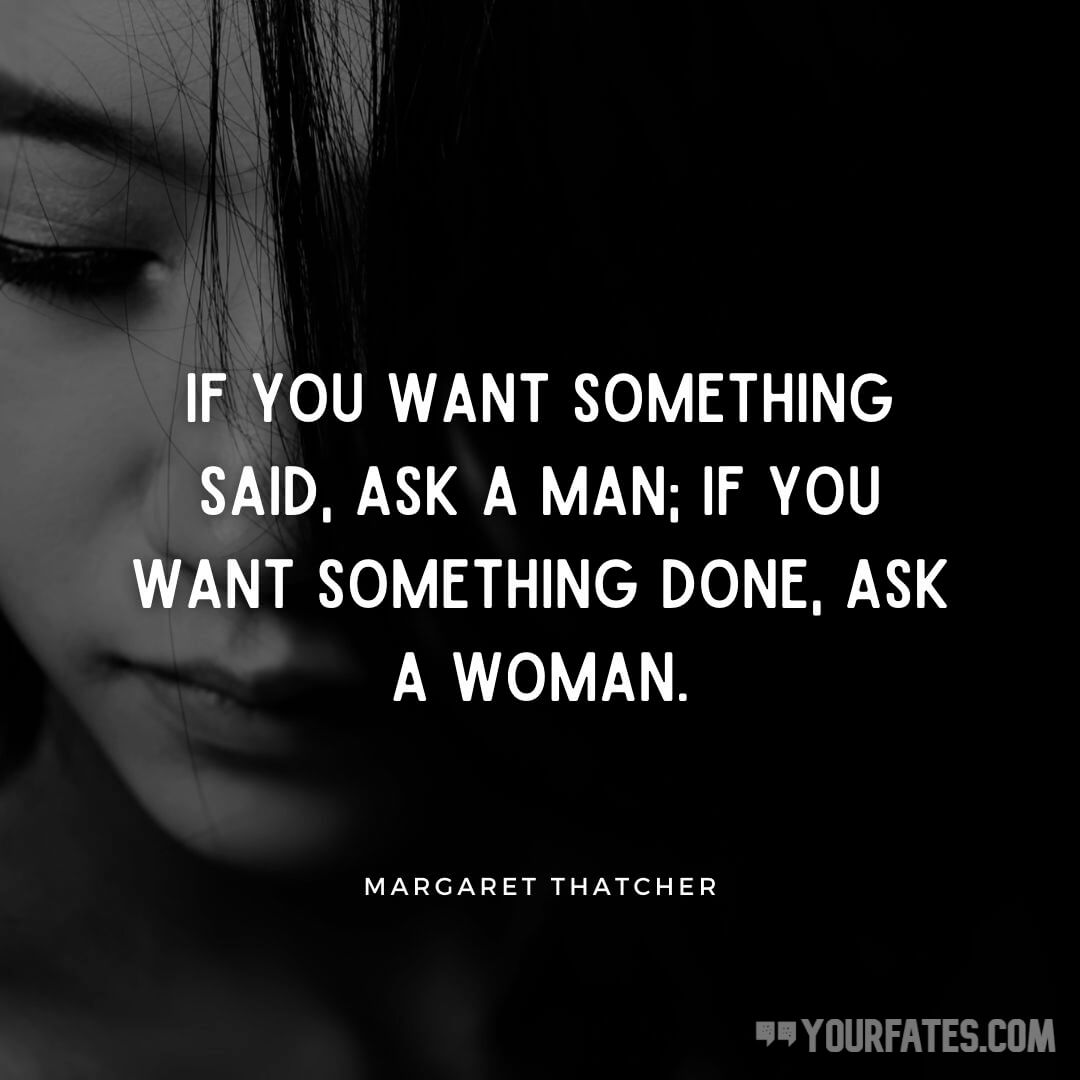 63. “Oh the innocent girl in her maiden teens knows perfectly well what everything means.” – D.H. Lawrence

64. “They say it’s the good girls who keep diaries. The bad girls never have the time.” – Tallulah Bankhead

65. “Courage doesn’t always roar. Sometimes courage is the quiet voice at the end of the day saying, I will try again tomorrow.”– Mary Anne Radmacher

67. “I know for sure that what we dwell on is what we become.” – Oprah Winfrey 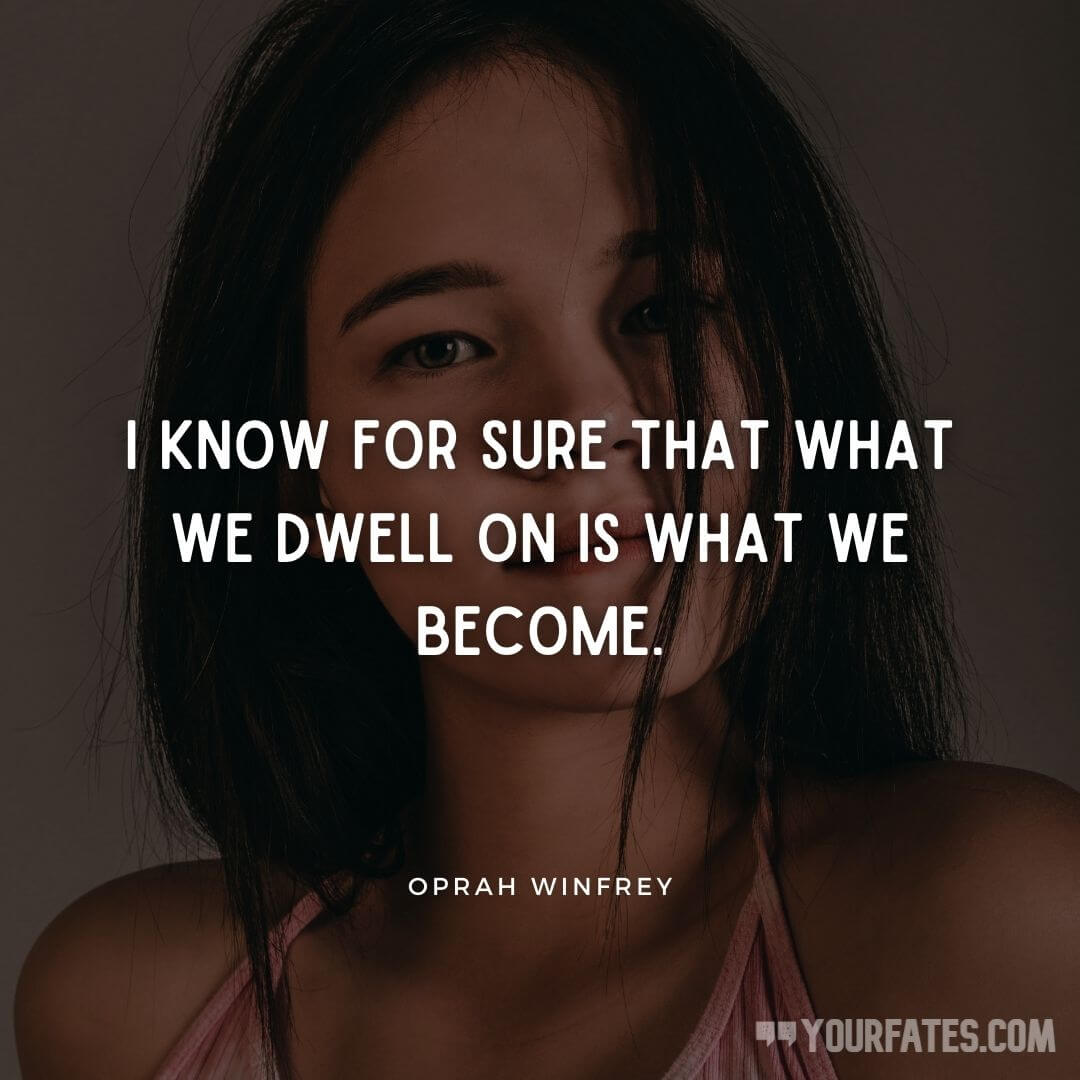 71. “The women who follow the crowd will usually go no further than the crowd. The woman who walks alone is likely to find herself in places no one has ever been before.”– Albert Einstein

72. “No matter how plain a woman may be, if truth and honesty are written across her face, she is beautiful.” – Eleanor Roosevelt 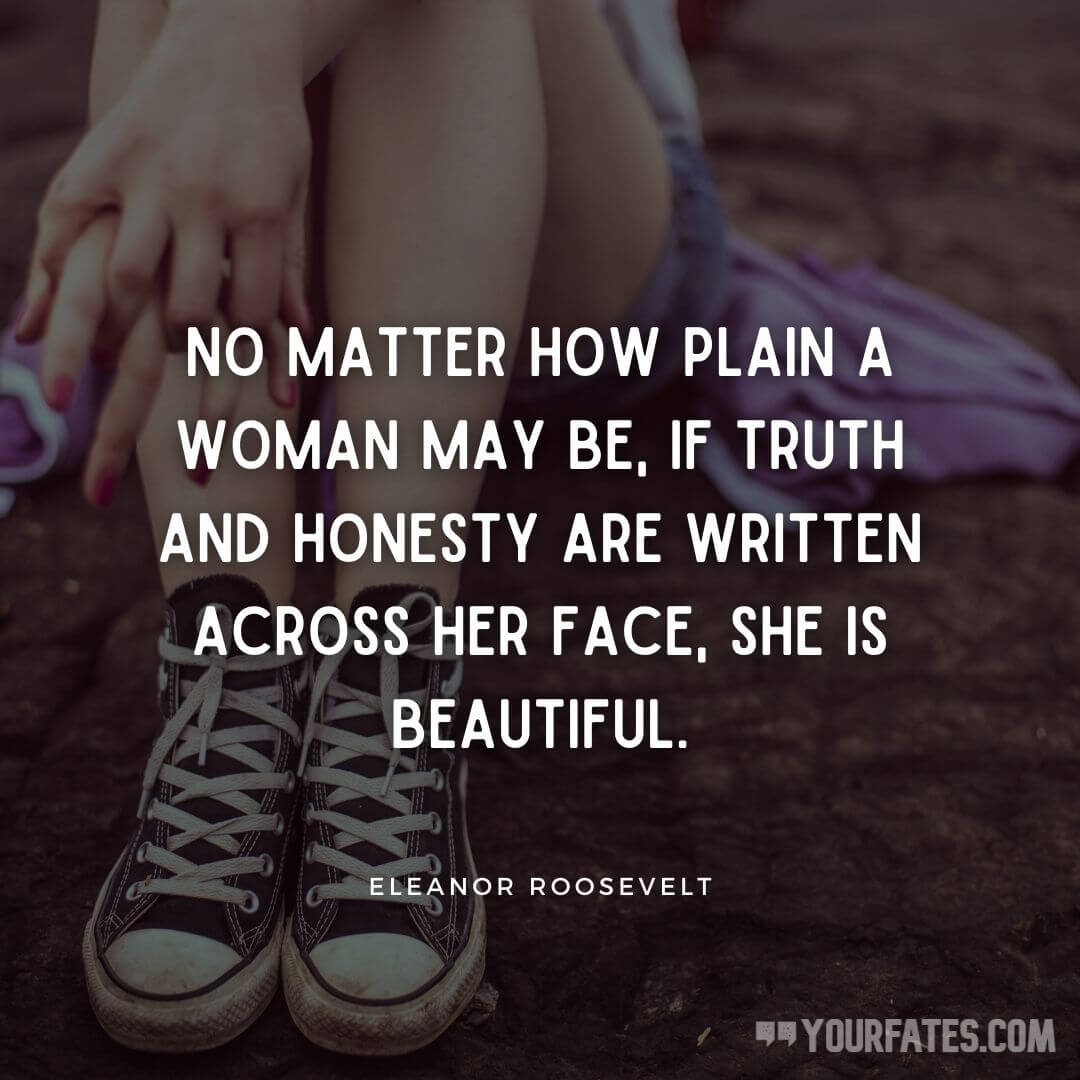 73. “It took me quite a long time to develop a voice, and now that I have it, I am not going to be silent.” – Madeleine Albright

74. “Happiness and confidence are the prettiest things you can wear.”– Taylor Swift

76. “Freeing yourself was one thing, claiming ownership of that freed self was another.” – Toni Morrison

77. “If you are always trying to be normal, you’ll never know how amazing you can be.” –Maya Angelou

78. “No one can make you feel inferior without your consent.” –Eleanor Roosevelt

79. “There is one rule, above all others, for being a man. Whatever comes, face it on your feet.”– Robert Jordan 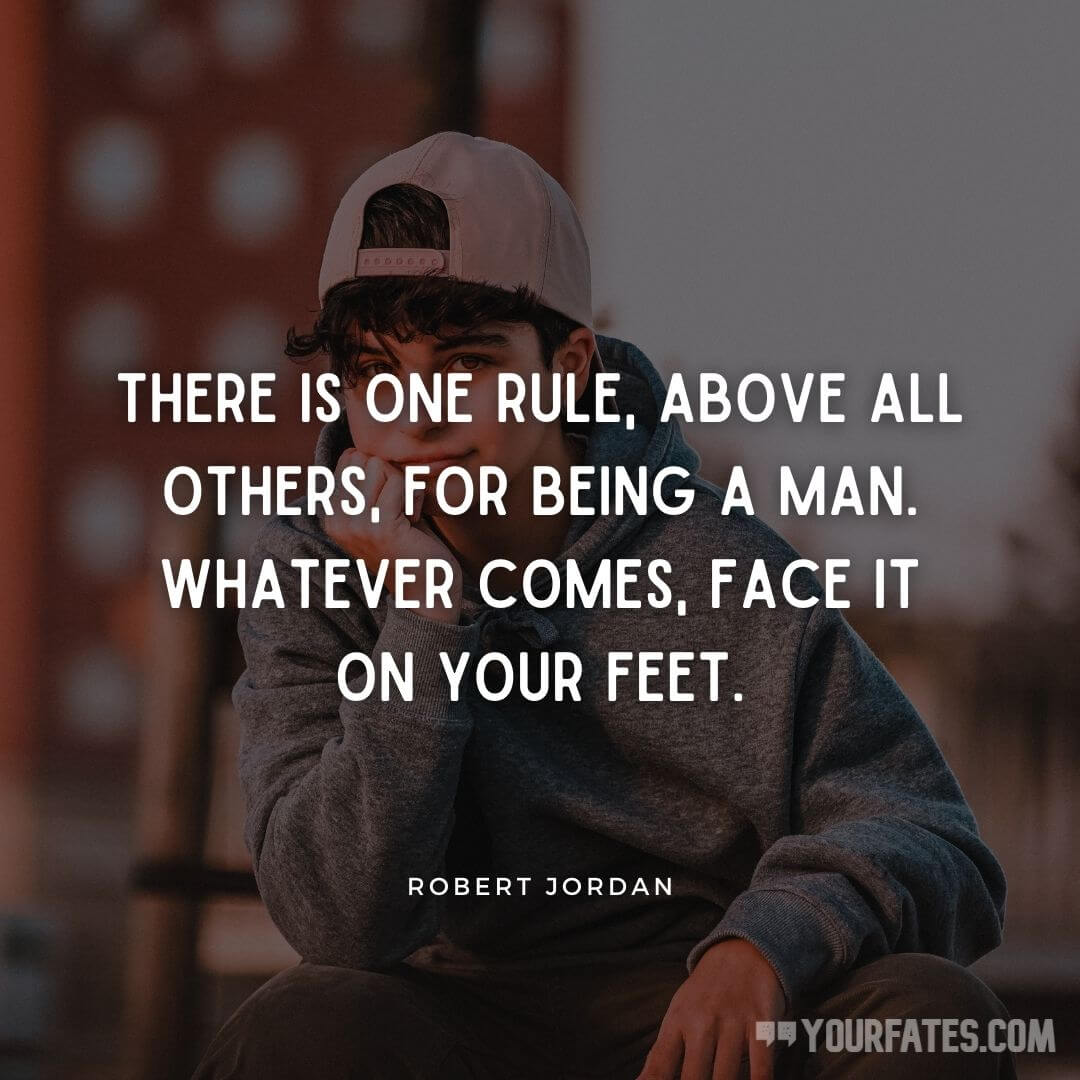 80. “It takes a real man to make a true confession – a chocolate soldier will excuse or cloak his sin.”– Charles Studd

81. “You will always pass failure on your way to success.”– Mickey Rooney

82. “Never let the odds keep you from doing what you know in your heart you were meant to do.”– H.Jackson Brown Jr.

83. “Never sacrifice three things: Your family, your heart, or your dignity.”

84. “Hard days are the best because that’s when champions are made. If you push through the hard days, then you can get through anything.”– Gabby Douglas

85. “The difference between winning and losing is most often not quitting.”– Walt Disney 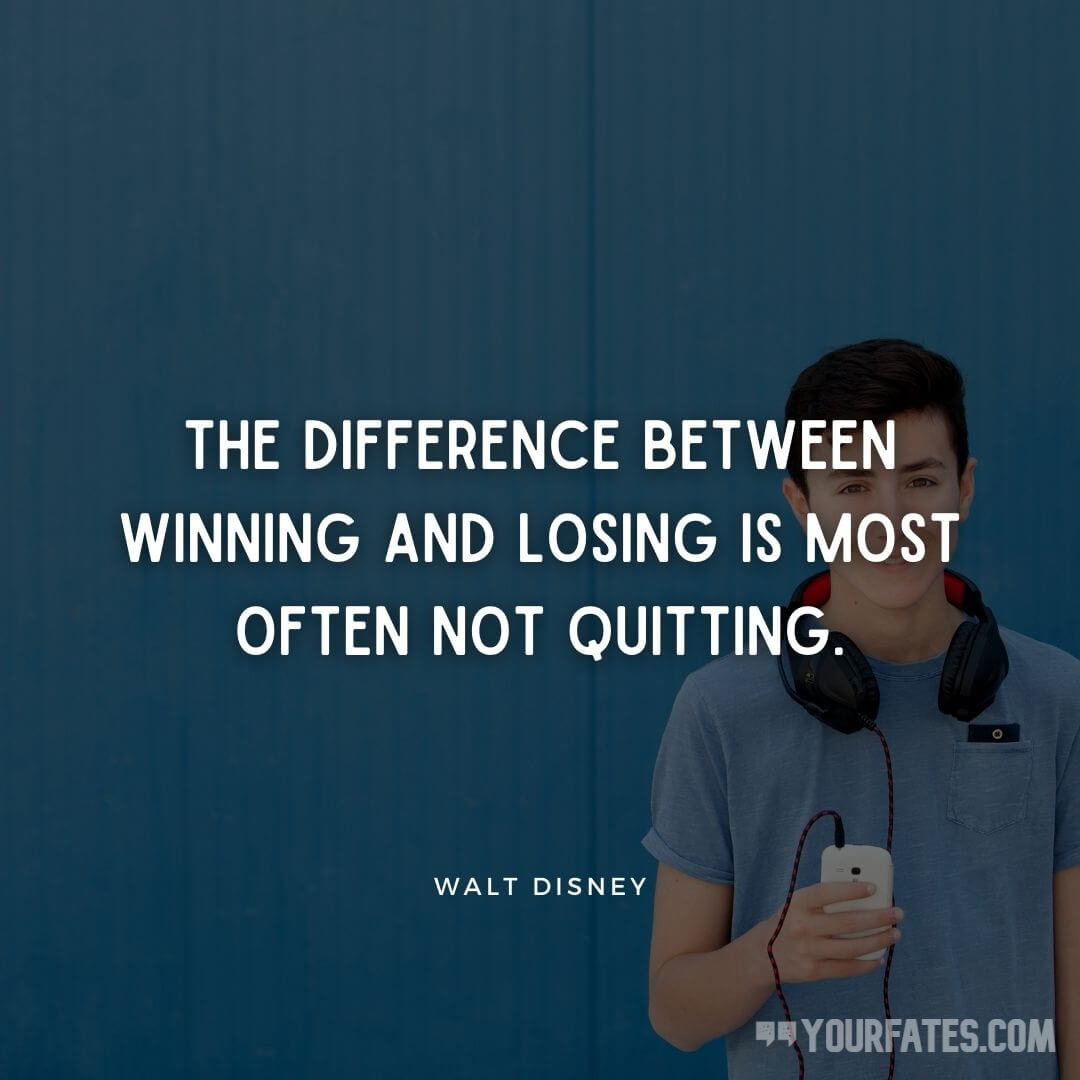 86. “You are free to choose, but you are not free from the consequence of your choice.”

89. “An old dog can learn new tricks. If your enthusiasm has lost its vitality, do everything possible to revive it.”– Don McArt

90. “Imagination is something that sits up with dad and mom the first time their teenager stays out late.” 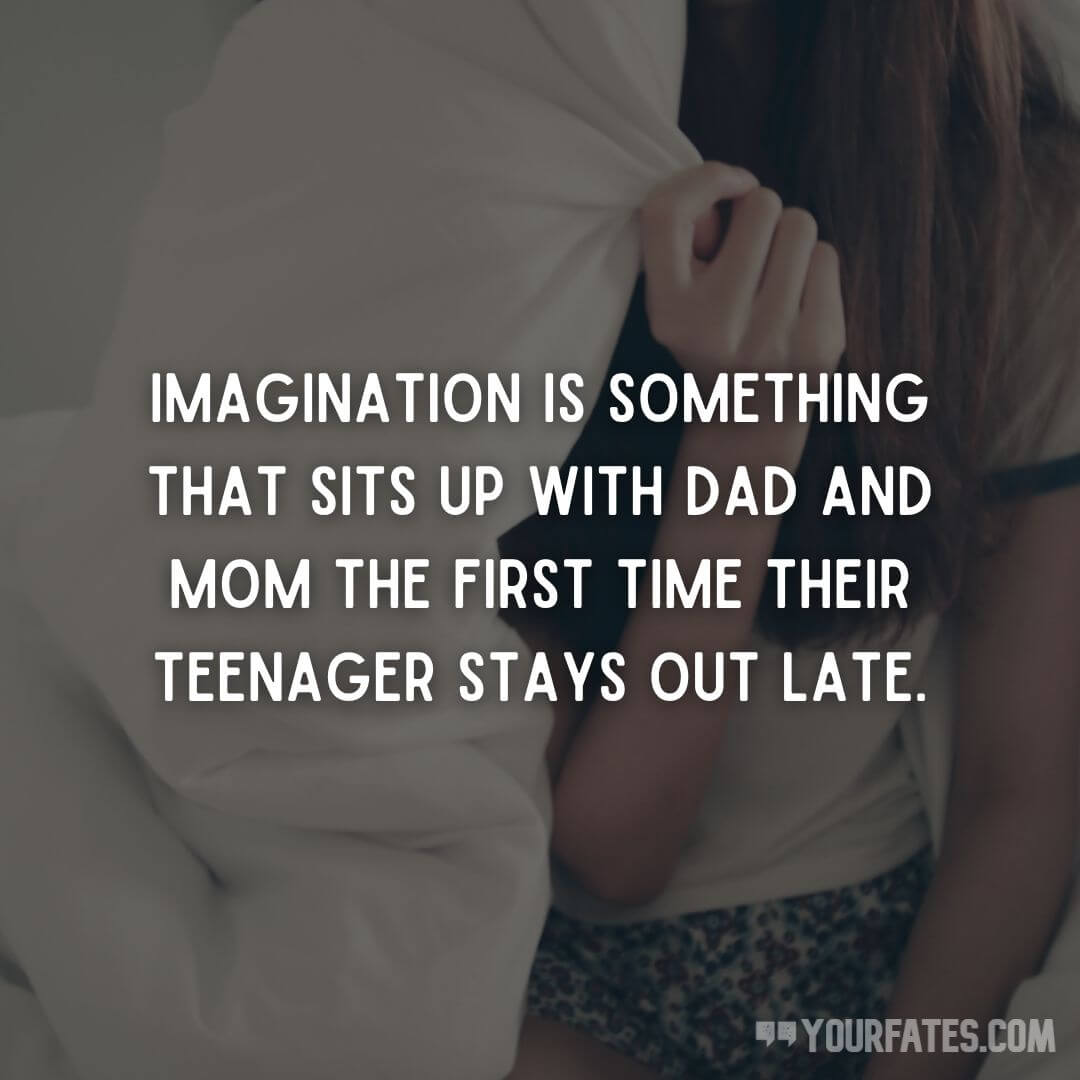 91. “When life gives you lemons, squirt someone in the eye.”– Cathy Guisewite

93. “A lie gets halfway around the world before the truth has a chance to get its pants on.” – Winston S Churchill

94. “When you are seventeen you aren’t really serious.” – Arthur Rimbaud 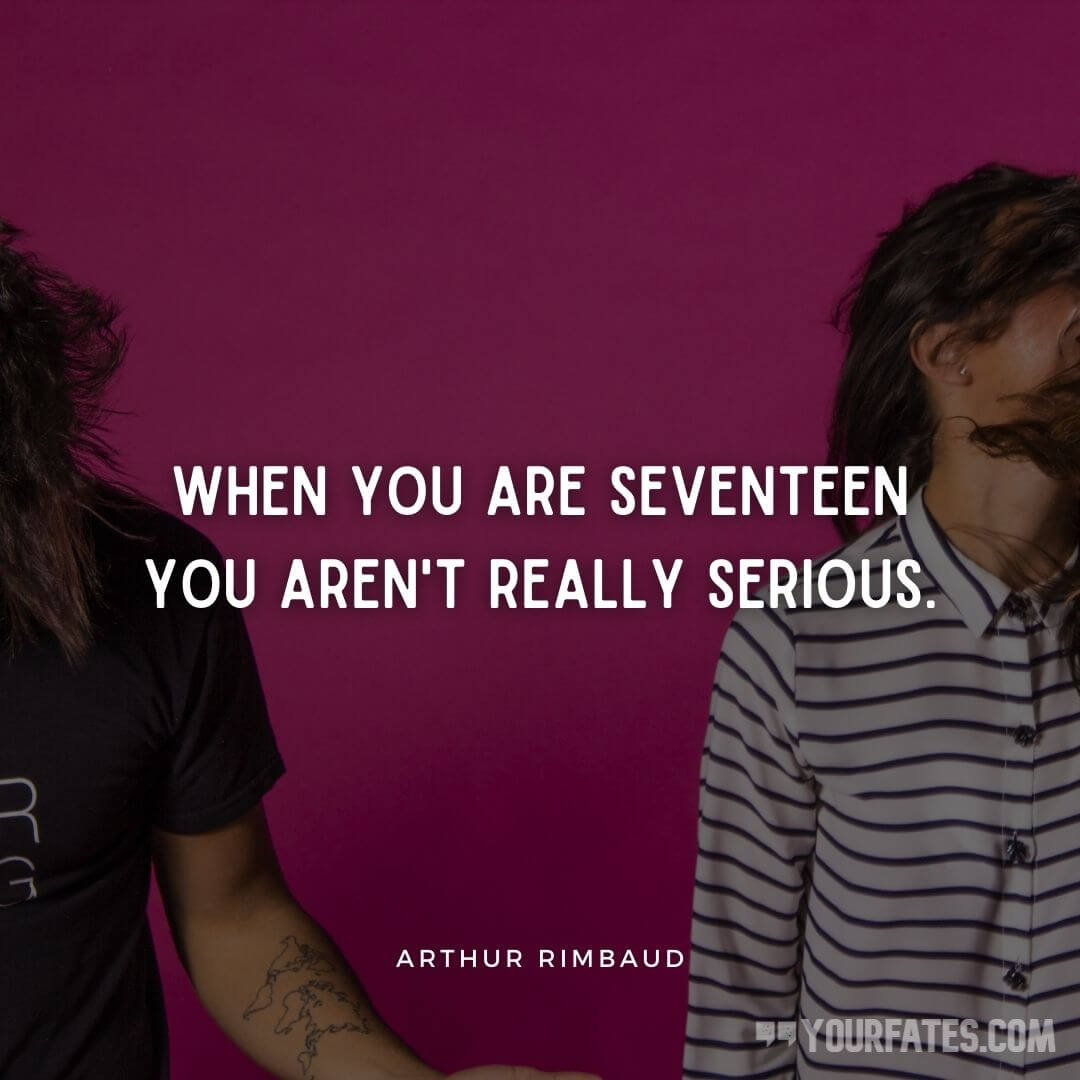 96. “To an adolescent, there is nothing in the world more embarrassing than a parent.” – Dave Barry

97. “Never lend your car to anyone to whom you have given birth.” – Erma Bombeck

98. “Teenagers complain there’s nothing to do, then stay out all night doing it.” – Bob Philips

99. “As I’ve said many times, the single most oppressed class in America right now is the teenager.” – Joe Bob Briggs

100. “I’ve learned that you can tell a lot about a person by the way (s)he handles these three things: a rainy day, lost luggage, and tangled Christmas tree lights.” – Maya Angelou

What are some teenage quotes?

1. "Don’t compromise even if it hurts to be yourself." – Toby Keith
2. "Never dull your shine for somebody else." – Tyra Banks
3. "Adolescence isn’t just about prom or wearing sparkly dresses." – Jena Malone
4. "Youth comes but once in a lifetime." – Henry Wadsworth Longfellow
5. "I was a quiet teenager, introverted, full of angst." - Nigella Lawson

Always remember, the teenager is the deciding factor in your life – You can make yourself or break yourself. As you know “Youth comes but once a lifetime” Make the best use of it and live to the fullest.

We hope you relate to these Teenage Quotes and get the best out of them. Also, If you’ve found us useful, please do consider telling your friends about it. All you have to do is send these quotes on WhatsApp and ask them to subscribe to us.