65 Save Money Quotes for a Happy Pocket 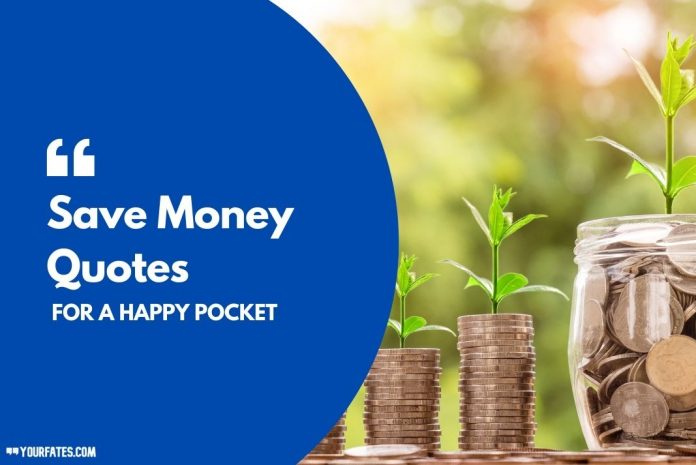 Generations come and go and take with them their habits and routines and then the new one finds out a different way to tackle the same old problems, or say they opt for a different habit or routine. But one habit that remained same is of making sure to live in a way so that we have money available for emergencies and our old age, so human has been saving money from ages. And today we have brought the best Save Money Quotes and Sayings that will tell you the importance of saving some of that cash.

Everyone in this world can earn money from one way or the other so why are some people wealthy and some poor? The answer lies in how they manage their money between expenses, savings and investments. Saving money is as important as earning it and nowadays people are crazy about investments too. Saved cash will not only create a cushion for your future emergencies but also remove some load from your mind regarding family functions, presents for your people, your wedding, your kid’s education and so on.

So let us save money so that we all can spend happily while also keeping in mind our future with these Save Money Quotes and Sayings:

4. “It’s how you deal with failure that determines how you achieve success.” – David Feherty

5. “There is a gigantic difference between earning a great deal of money and being rich.” –  Marlene Dietrich

6. “Save money and money will save you.” – Unknown 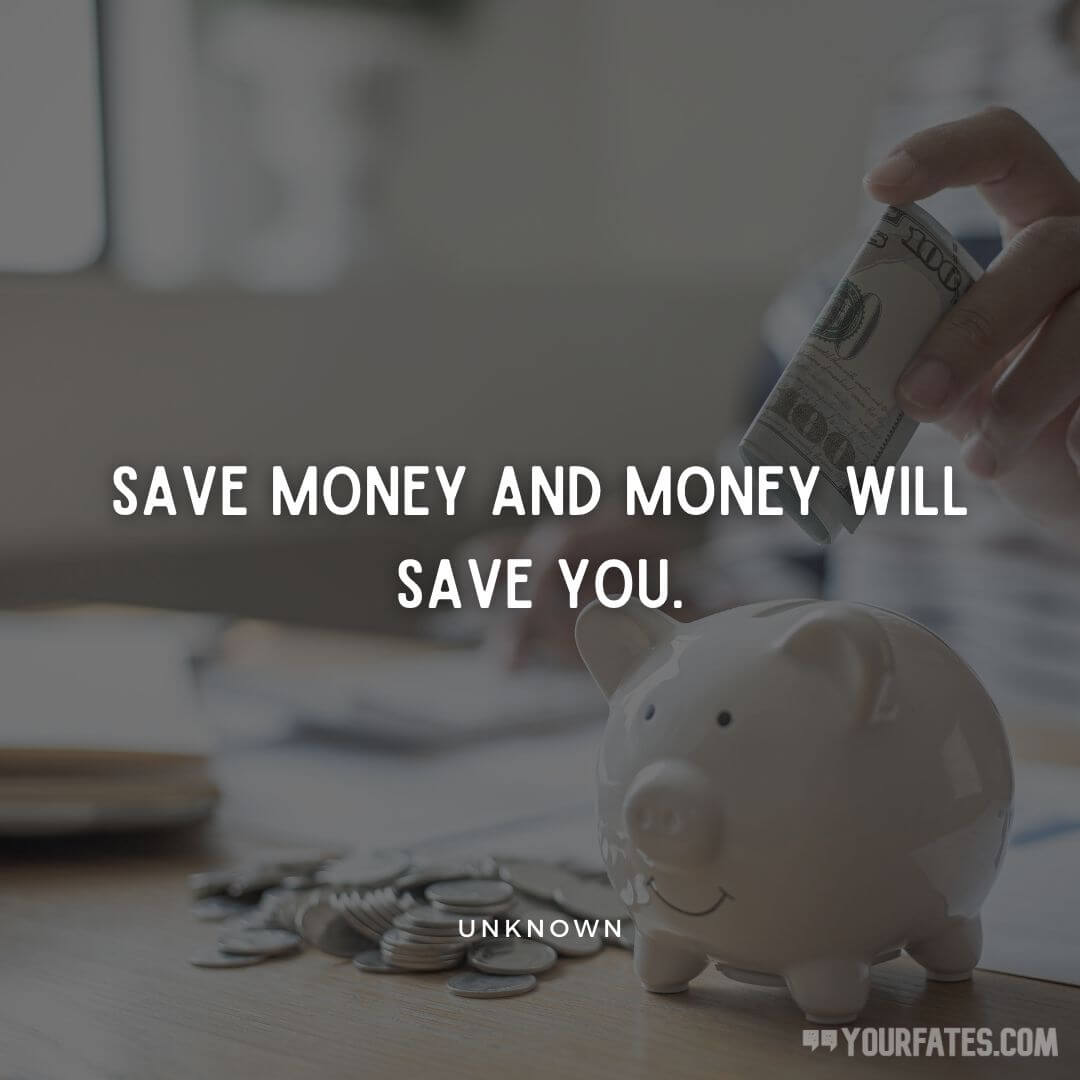 7. “Saving comes too late when you get to the bottom.”- Seneca

8. “You must learn to save first and spend afterwards.”- John Poole

9. “Wealth is not his that has it, but his that enjoys it.” – Benjamin Franklin

12. “Money is only a tool. It will take you wherever you wish, but it will not replace you as the driver.” – Ayn Randu

13. “If you would be wealthy, think of saving as well as getting.” -Benjamin Franklin 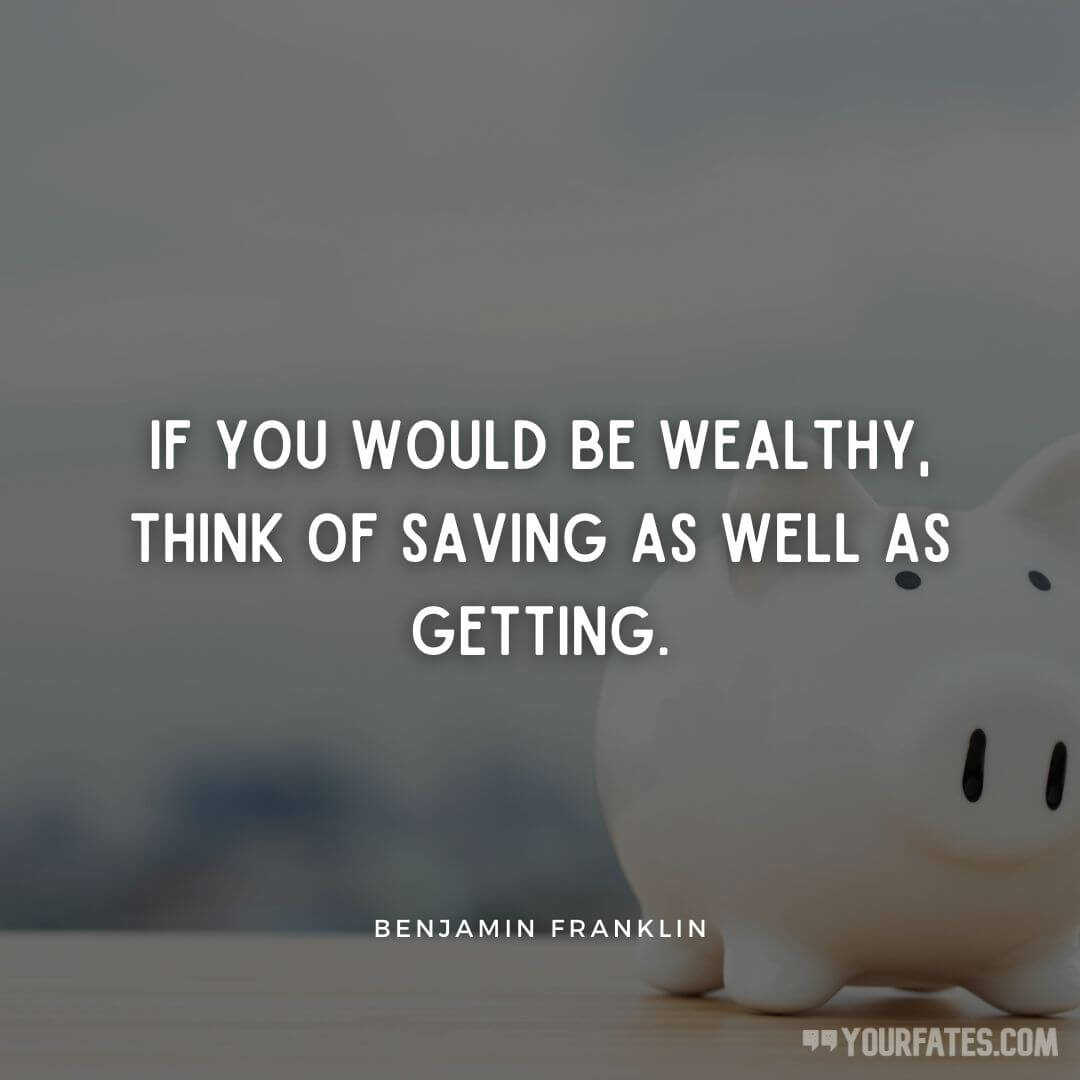 14. “If we command our wealth, we shall be rich and free. If our wealth commands us, we are poor indeed.” -Edmund Burke

15. “The stock market is filled with individuals who know the price of everything, but the value of nothing.” – Phillip Fisher

16. “A simple fact that is hard to learn is that the time to save money is when you have some.” -Joe Moore

17. “Money looks better in the bank than on your feet.”- Sophia Amoruso

18. “Don’t tell me where your priorities are. Show me where you spend your money and I’ll tell you what they are.” -James W. Frick 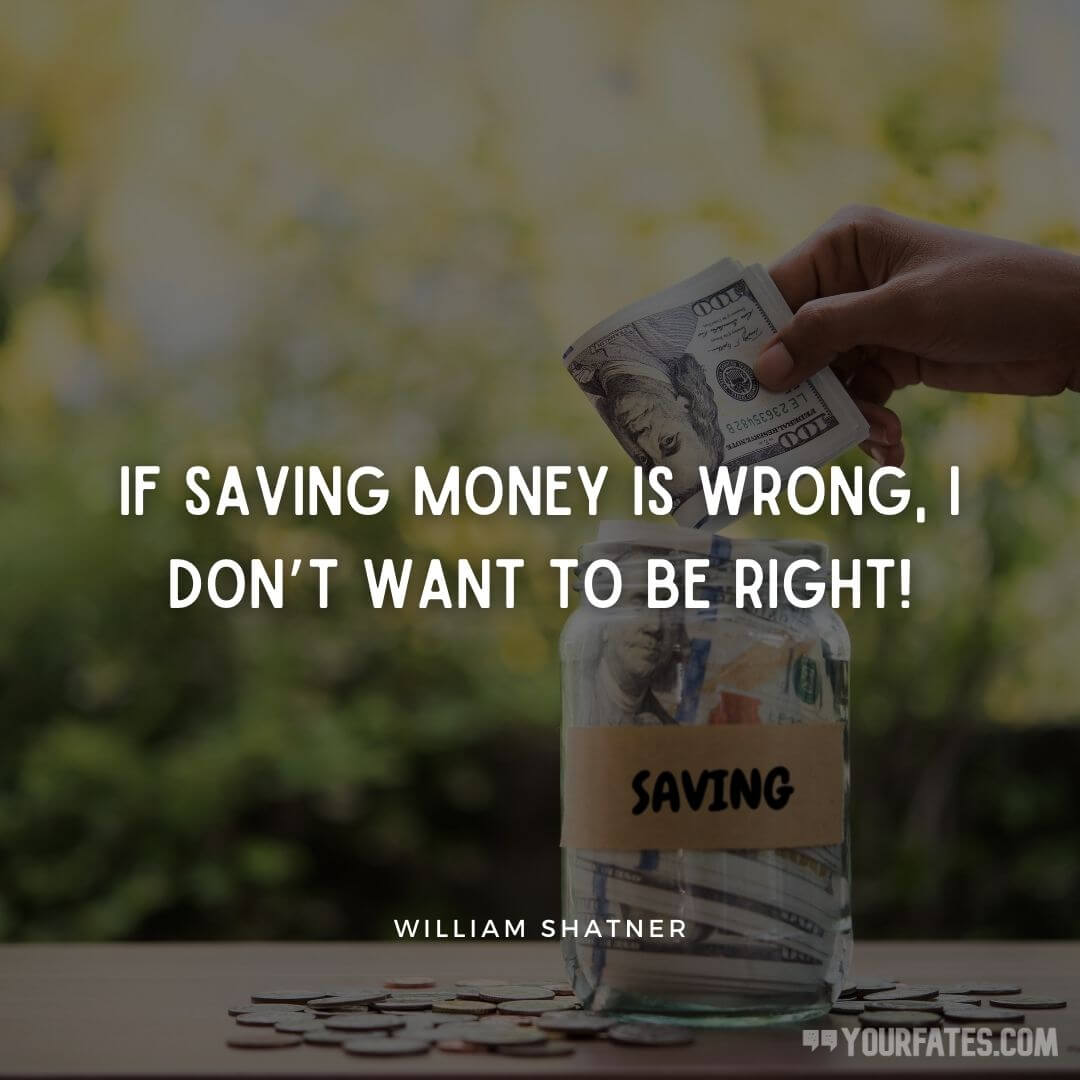 20. “Every time you borrow money, you’re robbing your future self.” – Nathan W. Morris

21. “Never spend your money before you have it.” – Thomas Jefferson

23. “The goal isn’t more money. The goal is living life on your terms.” – Chris Brogan

24. “Money speaks only one language “If you save me today, I will save you tomorrow.”

25. “It’s not your salary that makes you rich. It’s your spending habits.”- Charles A Jaffe

26. “Saving must become a priority, not just a thought. Pay yourself first.”- Dave Ramsey

27. “Waste neither time nor money, but make the best use of both.” – Benjamin Franklin

28. “Stop buying things you don’t need to impress people you don’t even like.”- Suze Orman 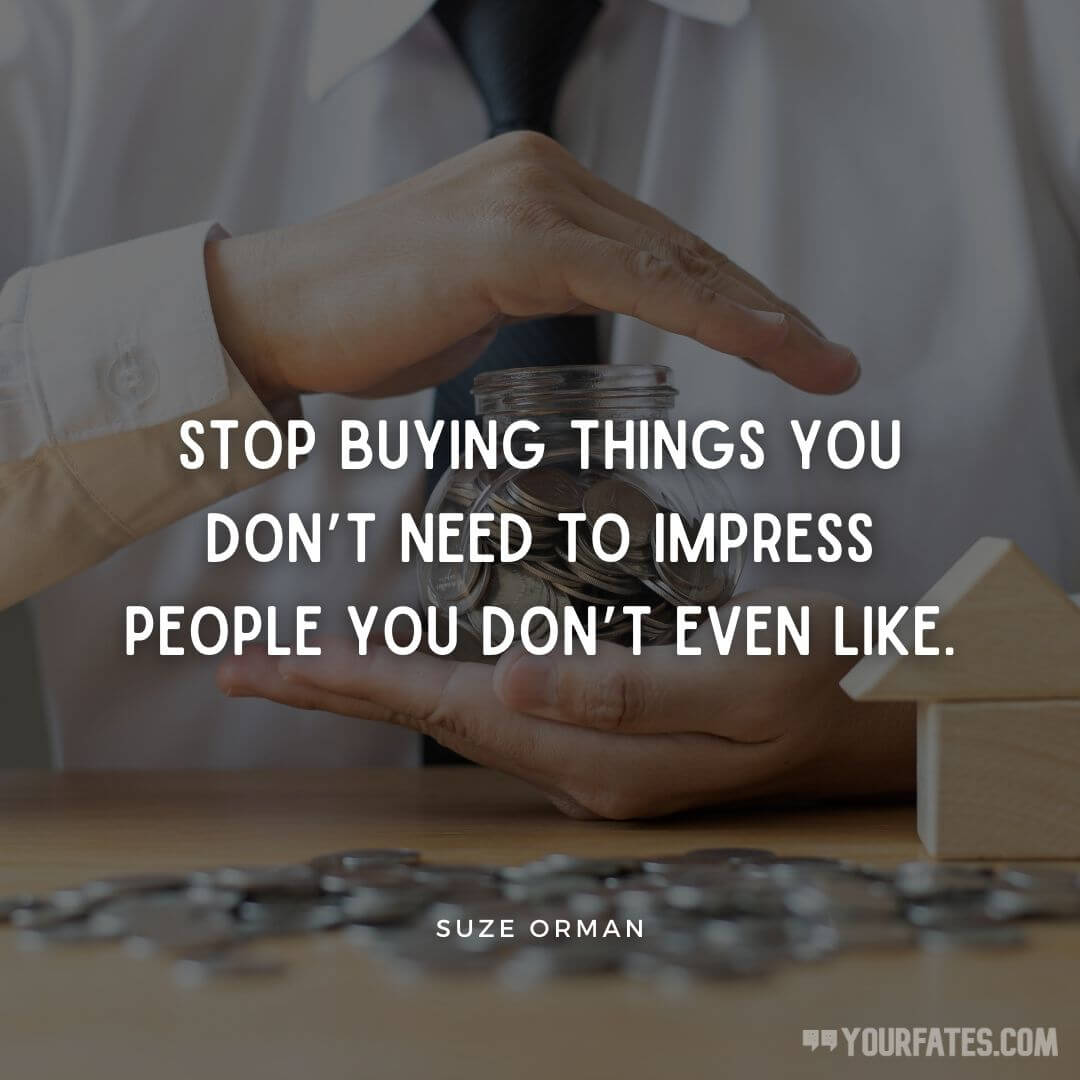 29. “The price of anything is the amount of life you exchange for it.” – Henry David Thoreau

30. “Saving money won’t get us rich. You have to spend it to get it.” – Jonathan Anthony Burkett

31. “Many folks think they aren’t good at earning money when what they don’t know is how to use it.”- Frank A. Clark

32. “Save your money. You’re going to need twice as much money in your old age as you think.”- Michael Caine

33. “When a man has learned to live without money, he thought, a few rubles can go a long way.”- Dan Millman

34. “The bitterness of poor quality remains long after the sweetness of low price is forgotten.” – Benjamin Franklin

35. “Look everywhere you can to cut a little bit from your expenses. It will all add up to a meaningful sum.” – Suze Orman

36. “The habit of saving is itself an education; it fosters every virtue, teaches self-denial, cultivates the sense of order, trains to forethought, and so broadens the mind.” – T.T. Munger

37. “You must gain control over your money or the lack of it will forever control you.” -Dave Ramsey

38. “A budget is telling your money where to go instead of wondering where it went.” – John C. Maxwell

39. “You must gain control over your money or the lack of it will forever control you.” – Dave Ramsey

41. “Empty pockets never held anyone back. Only empty heads and empty hearts can do that.” – Norman Vincent Peale

42. “Many people take no care of their money till they come nearly to the end of it, and others do just the same with their time.” – Johann Wolfgang von Goethe 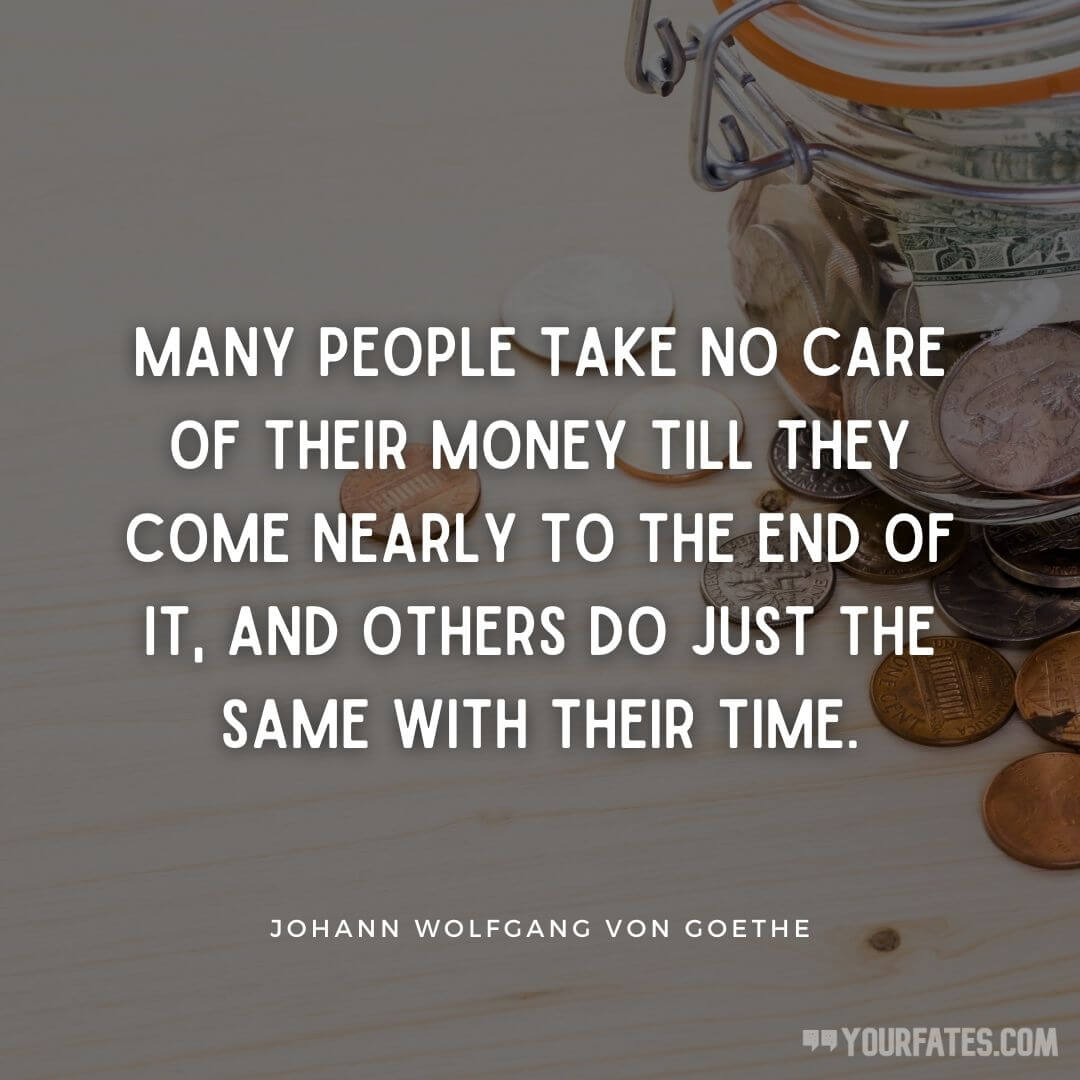 43. “It is great wealth to a soul to live frugally with a contented mind.” – Lucretius

45. “Don’t blame your income for the fact that you’re not saving money.”

46. “Money is a terrible master but an excellent servant.” -P.T. Barnum

47. “A wise person should have money in their head, but not in their heart.” -Jonathan Swift

49. “Empty pockets never held anyone back. Only empty heads and empty hearts can do that.” – Norman Vincent Peale

50. “It is thrifty to prepare today for the wants of tomorrow.” – Aesop

51. “The quickest way to double your money is to fold it in half and put it in your back pocket.” -Will Rogers

54. “An investment in knowledge pays the best interest.” – Benjamin Franklin

56. “A man who both spends and saves money is the happiest man because he has both enjoyments.” – Samuel Johnson

57. “Being a smart shopper is the first step to getting rich.” – Mark Cuban

58. “Deprive yourself on nothing necessary for your comfort, but live in an honorable simplicity and frugality.” – John McDonough

59. “By sowing frugality we reap liberty, a golden harvest.” – Agesilaus

60. “Save money on the big, boring stuff so that you have something left over for life’s little pleasures.” – Elisabeth Leamy

61. “Happiness is not in the mere possession of money; it lies in the joy of achievement, in the thrill of creative effort.” – Franklin D. Roosevelt

63. “Money amassed either serves us or rules us.” – Horace

64. “I believe that thrift is essential to well-ordered living.”  – John D. Rockefeller

Our parents and grandparents used to earn tirelessly and then buy some gold or land for saving’s purpose. But today, we believe in less work and more outcomes. People now hustle to get earnings from more than one source, they invest in risky markets for greater returns and so on. But at the end, make sure to save a bit every month. Have a great day ahead.

We hope you like these collections of Save Money Quotes. Also, If you’ve found us useful, please do consider telling your friends about it. All you have to do is send these quotes on WhatsApp and ask them to subscribe to us.