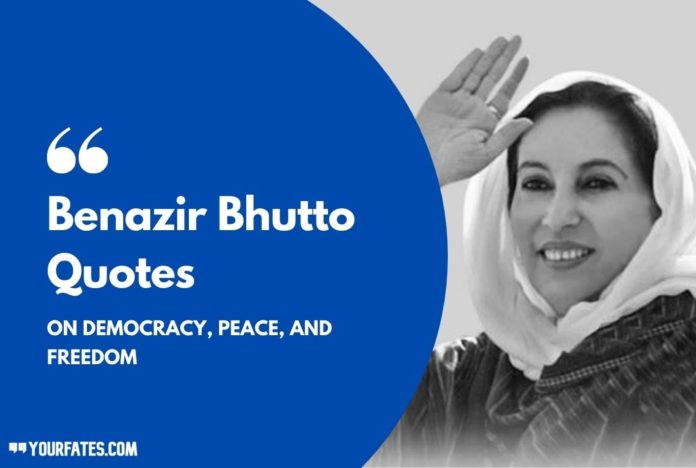 The fight for the truth is important. There will come a day when you will see the result of your struggles. – Benazir Bhutto

What do you think about the strongest lady who led Pakistan twice – Benazir Bhutto? People love her for her courage, wisdom and generosity. We have brought you this amazing collection of Benazir Bhutto Quotes and Sayings that will give you the remark of her character and thoughts.

Benazir Bhutto was the first female Prime Minister of Pakistan.

She was the eldest child of Zulfikar Ali Bhutto who was the founder of Pakistan People’s Party (PPP). After completing her schooling from Pakistan, Benazir went to the United States for higher studies. She graduated from Harvard University and completed a course in International Law and Diplomacy from Oxford University.

After her father’s execution, Bhutto became the head of the Pakistan People’s Party. In 1988, President Zia died in a plane crash that left the seat vacant and Bhutto became the first female Prime Minister of Pakistan. In 1990, she was dismissed because of the charges of Corruption on her. In the elections of 1993, PPP fought against Nawaz Sharif and won the seat.

Benazir then governed the country from 1993 to 1996. She made many social programs and attracted foreign investments during her leadership.

She was convicted and went to jail for three years in charge of corruption while she was in self-imposed exile.

In 2007, Bhutto returned after being free from all charges. Her return from exile after 8 years was celebrated in the form of rallies.

On 27 December 2007, this courageous lady of Pakistan was killed in Rawalpindi. But her death is still a mystery.

Benazir Bhutto was loved by the people of her nation. Her courage was her uniqueness. She was generous and worked to remove poverty from the nation.

Bhutto has also written many books. “Daughter of the East” is the most famous one which is her autobiography. So, here’s the one for an empowered lady of Pakistan

“Democracy is necessary to peace and to undermining the forces of terrorism.”  – Benazir Bhutto

“Whatever my aims and agendas were, I never asked for power.” – Benazir Bhutto

“Right now, they feel they have lost their voice, and their miseries have increased since my departure.” – Benazir Bhutto

“I dream of a world where we can commit our social resources to the development of human life and not to its destruction.” – Benazir Bhutto

“Democracy needs support, and the best support for democracy comes from other democracies.” – Benazir Bhutto 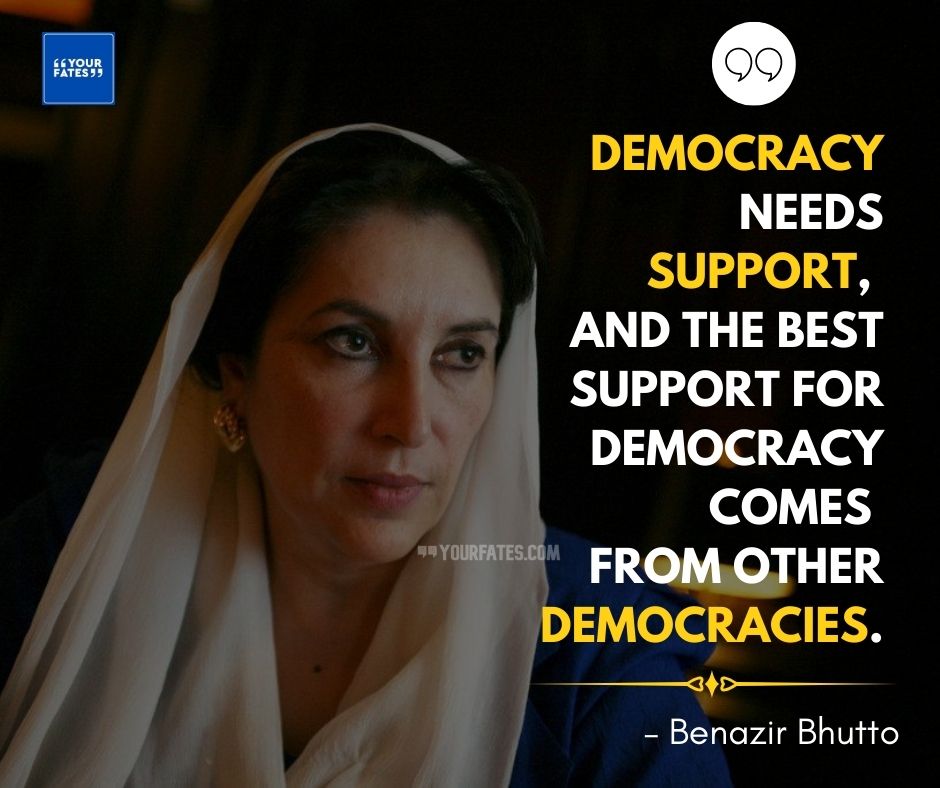 “Given the right to a free ballot, the people would support my return.” – Benazir Bhutto

“Right now, they feel they have lost their voice, and their miseries have increased since my departure. – Benazir Bhutto

“The best hijab is in the eyes of the beholder.” – Benazir Bhutto

“As a woman leader, I thought I brought a different kind of leadership. I was interested in women’s issues, in bringing down the population growth rate… as a woman, I entered politics with an additional dimension – that of a mother.” – Benazir Bhutto

“It’s quite difficult for me not to be able to return to my country, but in my country justice has been murdered.” – Benazir Bhutto

“We learned at an early age that it was men’s interpretation of our religion that restricted women’s opportunities, not our religion itself. Islam in fact had been quite progressive toward women from its inception.” – Benazir Bhutto

“Freedom is not an end. Freedom is the beginning.” – Benazir Bhutto

“A people inspired by democracy, human rights, and economic opportunity will turn their back decisively against extremism.” – Benazir Bhutto

“All our problems, all our disputes, all our disagreements can be resolved quickly to mutual satisfaction if we address the question. – Benazir Bhutto

“What is not recorded is not remembered.” – Benazir Bhutto

“The military wants a system that protects its policies and privileges.” – Benazir Bhutto

“I believe that democracies do not go to war, that’s the lesson of history.” – Benazir Bhutto 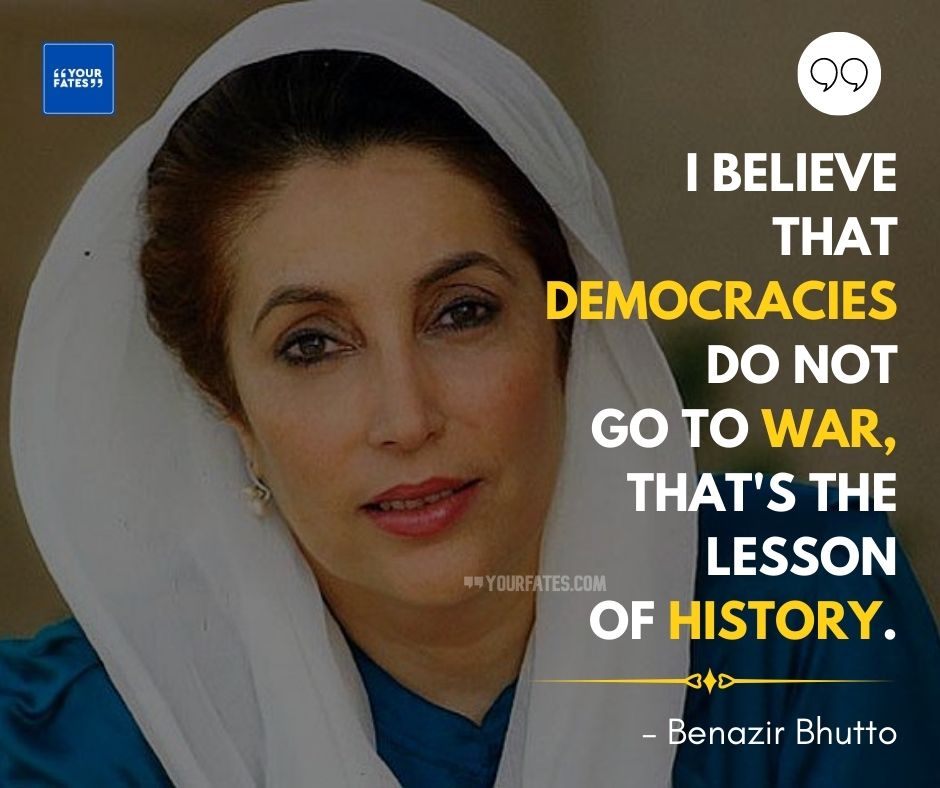 “Democracy needs support and the best support for democracy comes from other democracies. Democratic nations should come together in an association designed to help each other and promote what is a universal value – democracy.” – Benazir Bhutto

“Clearly it’s not easy for woman in modern society, no matter where we live. We still have to go extra mile to prove that we are equal to men. We have to work longer hours and make more sacrifices. And we must emotionally protect ourselves from unfair, often vicious attacks made on us.” – Benazir Bhutto

“Ultimately, leadership is about the strength of one’s convictions, the ability to endure the punches, and the energy to promote an idea. And I have found that those who do achieve peace never acquiesce to obstacles, especially those constructed of bigotry, intolerance, and inflexible tradition.” – Benazir Bhutto

“Every dictator uses religion as a prop to keep himself in power.” – Benazir Bhutto

Even after facing a lot of contradictions, Benazir remained determined. Her courage and generosity is an inspiration for all of us.

We hope you have enjoyed these famous Benazir Bhutto Quotes and Sayings and get inspired. Also, If you’ve found us useful, please do consider telling your friends about it. All you have to do is send these quotes on WhatsApp and ask them to subscribe to us.