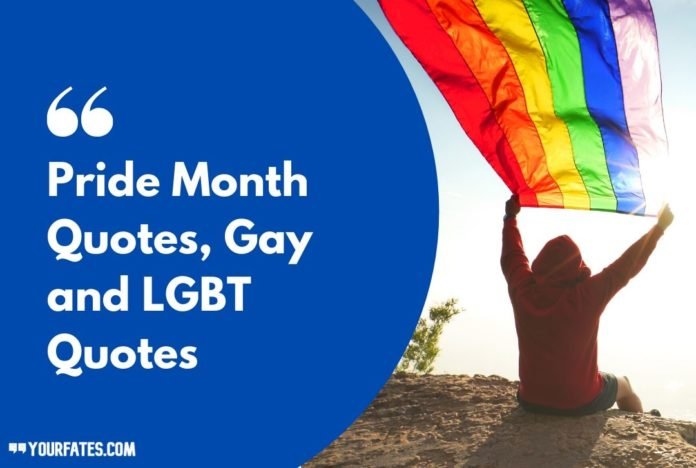 This post is the collection of Best Inspirational Pride Month Quotes and LGBT Quotes, Gay Quotes from various sources. 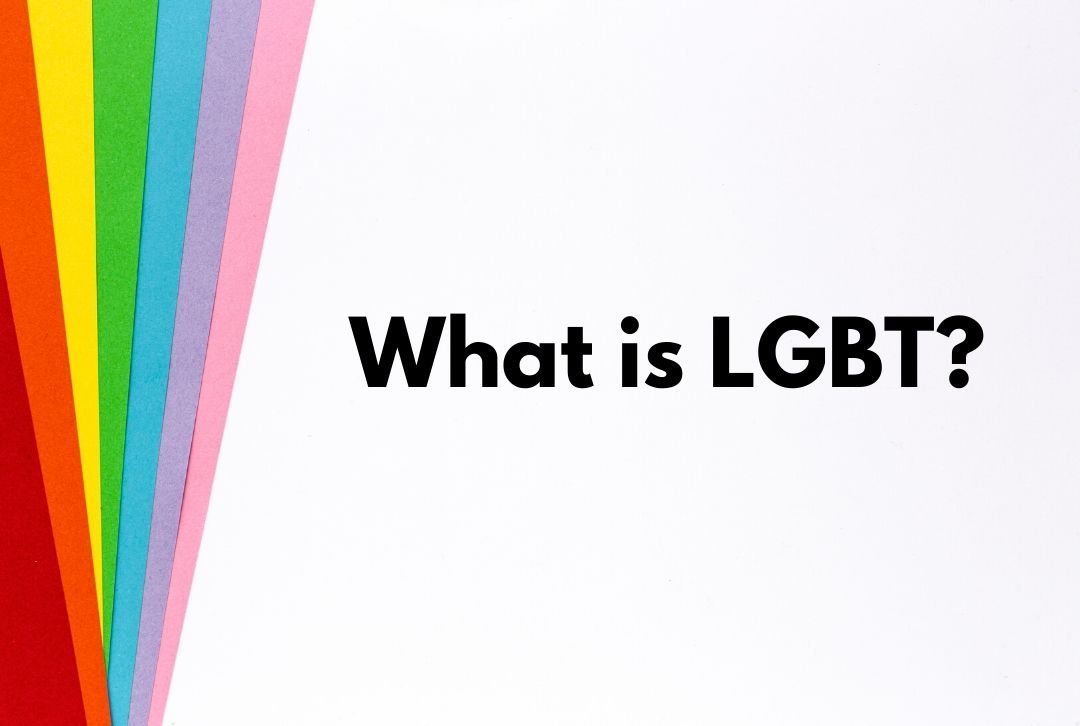 Talk about whether homosexuality is a crime or not later, but the first question that will be in many people’s minds is what is LGBT? We have heard many names of homosexual, bisexual, and transgender.

So what is the difference between all these? Actually, LGBT is a joint name that is made up of Lesbian, Gay, Bisexual, and Transgender. The existence of homosexuality has been found in all cultures and countries, although the governments of some countries refute this.

In this, the attraction of a woman to the woman is in the lesbian category, while the attraction of the man towards the male comes in the gay category. At the same time, people who are attracted to both men and women are called bisexual.

In this post, we have collected LGBT quotes, Gay Quotes, pride month quotes, quotes about LGBT discrimination, and also some powerful quotes from changemakers who are have contributed to the movement for LGBT equality.

1. “Love him and let him love you. Do you think anything else under heaven really matters?” – James Baldwin

2. “When all Americans are treated as equal, no matter who they are or whom they love, we are all more free.” –Barack Obama

3. “If I wait for someone else to validate my existence, it will mean that I’m shortchanging myself.” – Zanele Muholi

4. “I am proud, that I found the courage to deal the initial blow to the hydra of public contempt.” – Karl Heinrich Ulrichs

6. “Every LGBTQ+ refugee has a unique situation—but the fear and pain they endured before coming to Canada is universal.” – Arsham Parsi

7. “Nature made a mistake, which I have corrected.” – Christine Jorgensen

8. “I’m not missing a minute of this. It’s the revolution!” – Sylvia Rivera

9. “When you are doing something that is right, you just do it and take care … Someone has to do this.” – Alice Nkom

10. “It is against this God who kills that we are fighting and resisting.” – Alexya Salvador

11. “My silences had not protected me. Your silence will not protect you.” – Audre Lorde

12. “I was not ladylike, nor was I manly. I was something else altogether. There were so many different ways to be beautiful.” -Michael Cunningham

13. “The beauty of standing up for your rights is others see you standing and stand up as well.”  -Cassandra Duffy

14. “So let me be clear: I’m proud to be gay, and I consider being gay among the greatest gifts God has given me.”-Tim Cook

15. “I’ve been embraced by a new community. That’s what happens when you’re finally honest about who you are; you find others like you.” -Chaz Bono 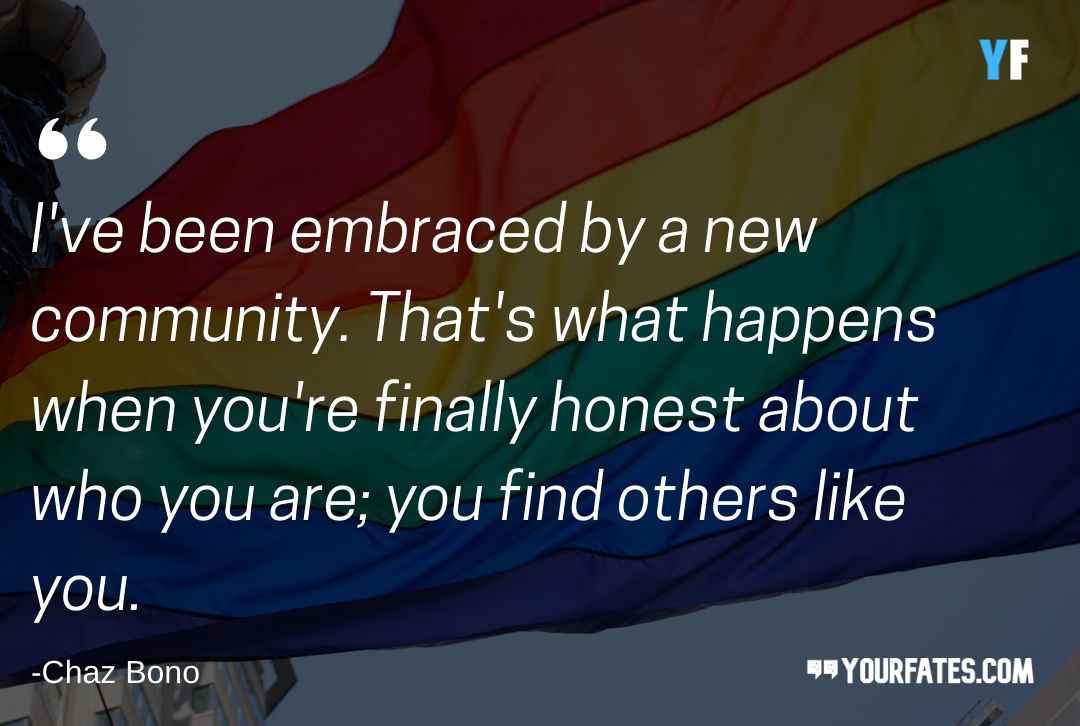 16. “What is straight? A line can be straight, or a street, but the human heart, oh, no, it’s curved like a road through mountains.”  -Tennessee Williams

17. “If homosexuality is a disease, let’s all call in queer to work: ‘Hello. Can’t work today, still queer.’-Robin Tyler

19. “The richness, beauty, and depths of love can only be fully experienced in a climate of complete openness, honesty and vulnerability.” – Anthony Venn Brown

20. “The beauty of standing up for your rights is others will see you standing and stand up as well.” -Columnist Cassandra Duffy

21. “Gender preference does not define you. Your spirit defines you.”-Author P.C. Cast

22. “This world would be a whole lot better if we just made an effort to be less horrible to one another.”-Ellen Page

23. “It takes some intelligence and insight to figure out you’re gay and then a tremendous amount of balls to live it and live it proudly.”-Jason Bateman

24. “I’m living by example by continuing on with my career and having a full, rich life, and I am incidentally gay.”-Portia DeRossi

25. “We should indeed keep calm in the face of difference, and live our lives in a state of inclusion and wonder at the diversity of humanity.”-George Takei

29. “We are not actually equal – humanity – if we are not allowed to freely love one another.” – Lady Gaga 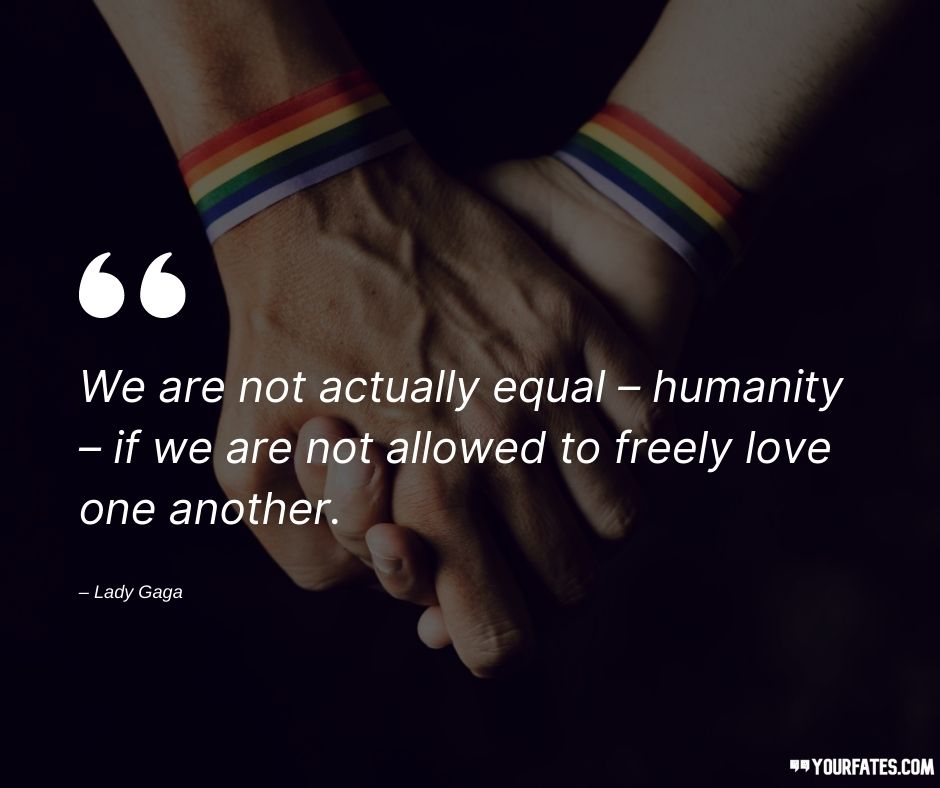 32. “We must declare ourselves, become known; allow the world to discover this subterranean life of ours which connects kings and farm boys, artists and clerks. Let them see that the important thing is not the object of love, but the emotion itself.” – Gore Vidal

Below you will find our collection of inspirational, wise, and humorous gay quotes, gay pride quotes, and gay rights quotes, collected over the years from a variety of sources. 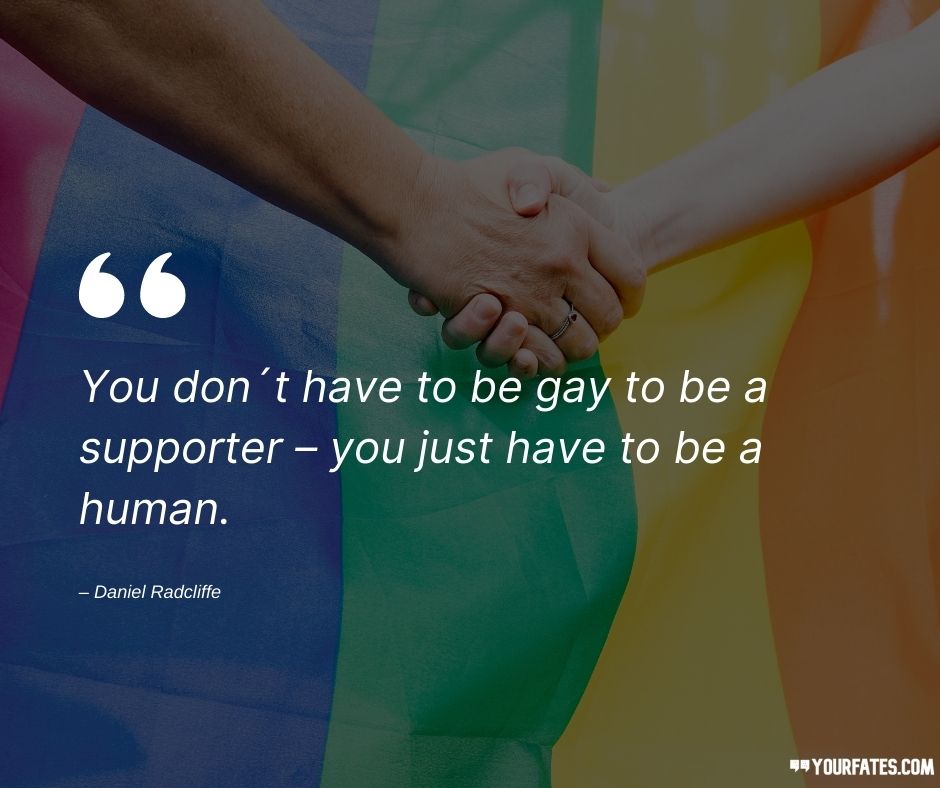 34. “Being gay and being a woman has one big thing in common, which is that we both become invisible after the age of 42. Who wants a gay 50-year-old? No one, let me tell you.”  -Rupert Everet

35. “I support gay marriage. I believe they have a right to be as miserable as the rest of us.” -Kinky Friedman

36. “When a gay person turns his back on you, it is anything but an insult; it’s an invitation.”   -Rush Limbaugh

37. “I believe the scripture says that being gay is a sin.” -Joel Osteen 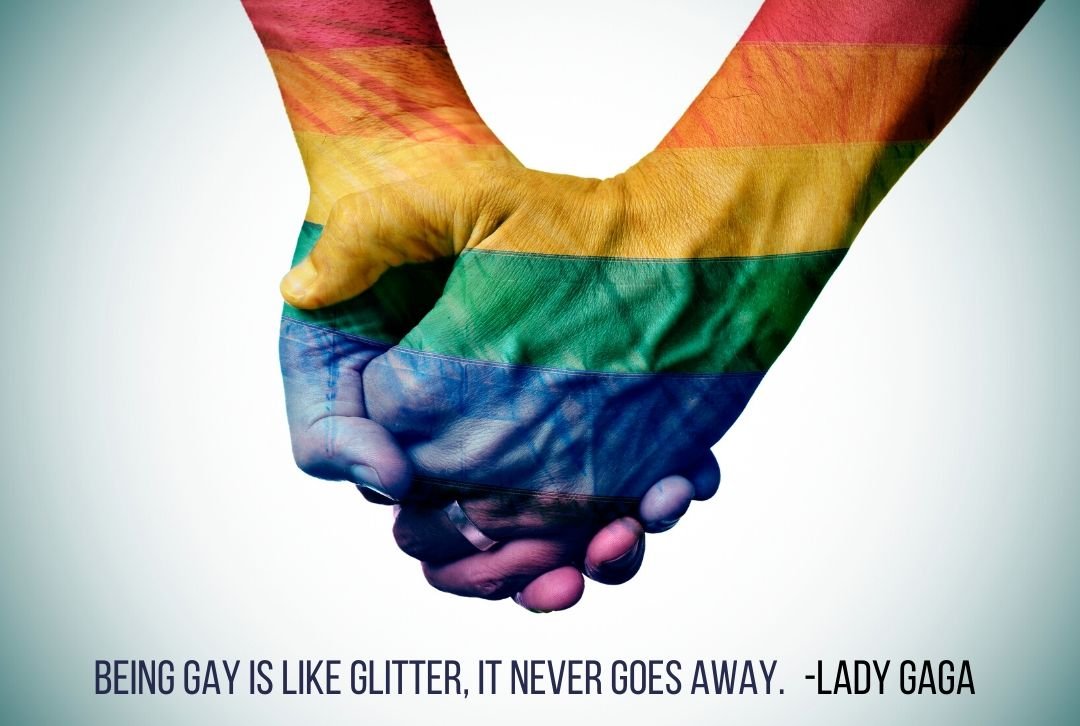 Pride Month39. “The way I approach the character isn’t about being gay or straight. It’s just about who you love. Gender has very little to do with it.” -Mia Kirshner

40. “A gay male never gets over the idea he is a thing of beauty, and a boy forever!” -unknown

41. “Being gay is natural. Hating gay is a lifestyle choice.”  -John Fugelsang

42. “I would advise any gay person that being out in the real sense can never happen too soon.” -George Michael

43. “I’m not ashamed of being gay, never have been and never will be. For that, I have no apologies.” -Tommy Kirk

44. “My mother thought me being gay was a death sentence.”  -Jai Rodriguez

45. “All parents should be aware that when they mock or curse gay people, they may be mocking or cursing their own child.”

46. “If you don’t like gay marriage, blame straight people. They’re the ones who keep having gay babies.”

47. “Stand up for what you believe in, even if it means standing alone.”

48. “If being gay is a choice, then when did you decide to become straight?”

49. “Be careful who you hate. It could be someone you love.“

50. “Being gay is like being left-handed. Some people are, most people aren’t and nobody really knows why. It’s not right or wrong, it’s just the way things are!”

51. “The only guy you need in your life is the one that proves he needs you in his.”

52. “If you have to make laws to hurt a group of people just to prove your morals and faith, then you have no true morals or faith to prove.” 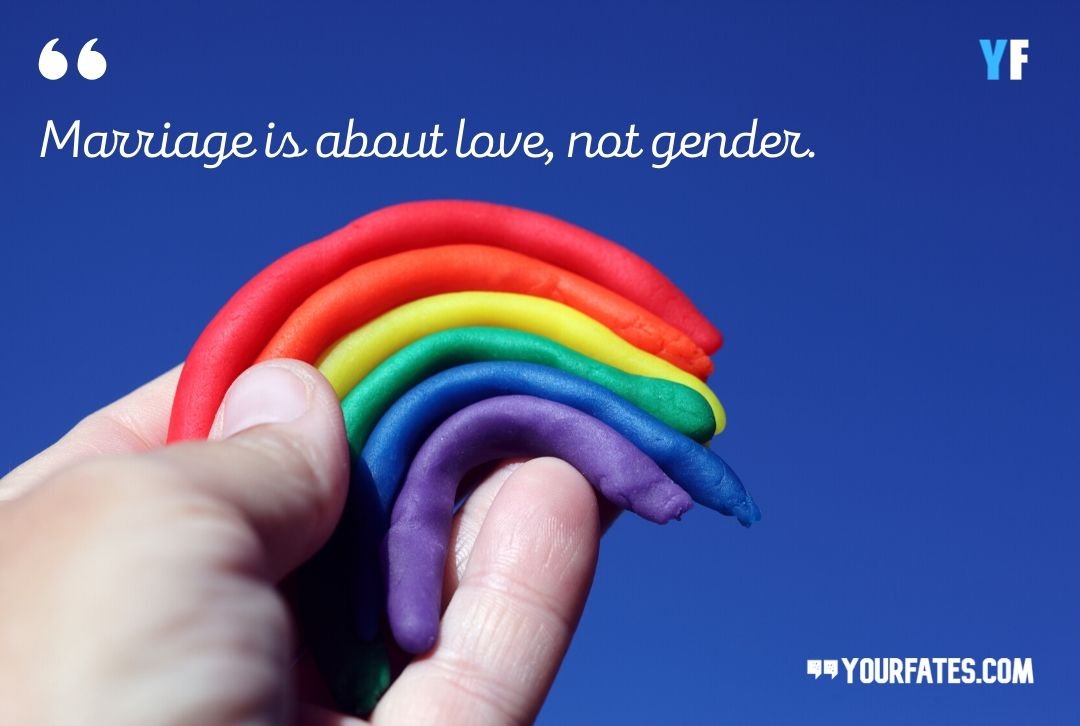 54. “Of course, gay men dress well. They didn’t spend all that time in the closet doing nothing.”

55. “I am a strong, black, lesbian woman. Every single time I say it, I feel so much better.” – Brittney Griner

56. “I will never change who I am just because you do not approve.”

57. “Homosexuality is found in over 450 species. Homophobia is only found in one.”

58. “Claiming that someone else’s marriage is against your religion is like being angry with someone for eating a donut when you’re on a diet.”

59. “Marriage is a human right, not a heterosexual privilege.”

60. “Never be bullied into silence. Never allow yourself to be made a victim. Accept no one’s definition of your life; define yourself.” – Harvey Fierstein

Homosexuals are in every religion, caste, and community and are like normal people, they also have the same needs as a normal male or female but in our society, they are still neglected, mocked, and despised.

They also have the right to live, to read and write, when nature has made them like that, why do they not get respect in society, this is a big question is, which is probably not available to anyone. The only answer is we have to change our mentality.

We hope you like these collections of Pride Month Quotes and LGBT Quotes. Also, If you’ve found us useful, please do consider telling your friends about it. All you have to do is send these quotes and wishes on WhatsApp and ask them to subscribe to us.