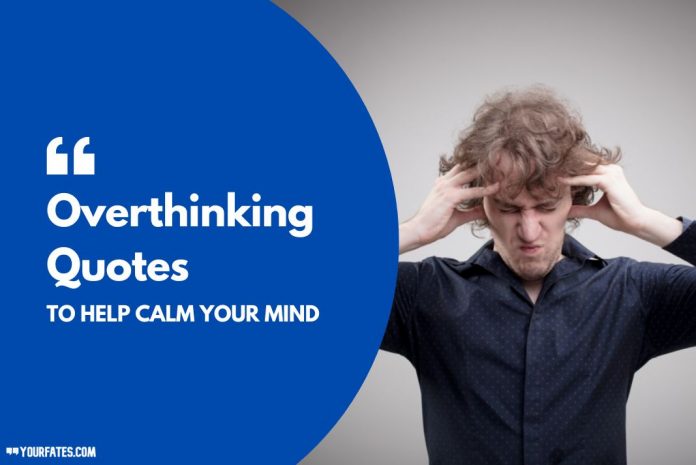 So, you are also suffering from this most common and most dangerous disease ‘Overthinking’. Let’s get into the cure of this disease before it ruins you. We have brought you this amazing collection of Overthinking Quotes by famous authors, philosophers, and other personalities that will help you not to overthink.

You don’t need to know everything from the beginning. You are going to figure it out eventually during the process. Don’t let your actions delay because of overthinking. Take the first step and everything is going to fall in the right place at the right time.

Below are some overthinking quotes that will help you to clean all the mess going in your head. Save these quotes for future reference so that you can read them for mental peace whenever you find yourself overthinking.

Also, share these quotes with your overthinker friends to get them some peace in life. Presenting you Overthinking Quotes and Sayings:

Don’t forget to also read out the handpicked collection of Know Your Worth Quotes to value yourself.

“If you keep thinking about what you want to do or what you hope will happen, you don’t do it, and it won’t happen.” – Desiderius Erasmus

“The more you rationalize, the more you move farther away from your authentic self.” – Shannon L. Alder

“Overthinking will not empower you over things that are beyond your control. So, let it be if it is meant to be and cherish the moment.” – Mahsati A

“If you can’t sleep, then get up and do something instead of lying there and worrying. It’s the worry that gets you, not the loss of sleep.” – Dale Carnegie

“Stop worrying about what tomorrow may bring. Focus on what you can control. Stay positive. Enjoy today. Expect good things to come.” – Karen Salmansohn

“Put your thoughts to sleep. Do not let them cast a shadow over the moon of your heart. Let go of thinking.”.- Rumi

“Be careful not to appear obsessively intellectual. When intelligence fills up, it overflows a parody.” – Criss Jami

“The more you overthink the less you will understand.” – Habeeb Akande

“Overthinking evaporates when you feel connected with your body, mind, breath and the soul.” – Amit Ray

“Overthinking, also, best known as creating problems that are never there” – David Sikhosana

“Sometimes, you overthink things so much that you ruin something before it even begins, then you beat yourself up, replaying everything to your friends and in your mind.”- Kirsten Corley

“Don’t overanalyze what you see. I have a feeling that you’re over-thinking things. Give it some time, and the pieces of this puzzle might come together.” – Jessica Park

“Don’t think. It complicates things. Just feel, and if it feels like home, then follow its path.”- R.M. Drake

“Stop overthinking, put more energy on what you really want to do.” – Amit Ray

“Don’t keep things bottled up. It’s not good for you.” – Kody Keplinger

“Worrying is like sitting in a rocking chair. It gives you something to do but it doesn’t get you anywhere” – Emma Bombeck

“Your addiction to thinking will come back to haunt you.” – Natsume Sōseki

“Don’t overthink yourself out of something good!” – Akosua Dardaine Edwards

“Take time to deliberate, but when the time for action comes, stop thinking and go in’ – Napoléon Bonaparte

“You can’t be that kid standing at the top of the waterslide, overthinking it. You have to go down the chute”  – Tina Fey

“You know, it is a little known fact that thinking is entirely overrated. The world would be a much better place if we all did a lot less of it.” – Laurie Viera Rigler 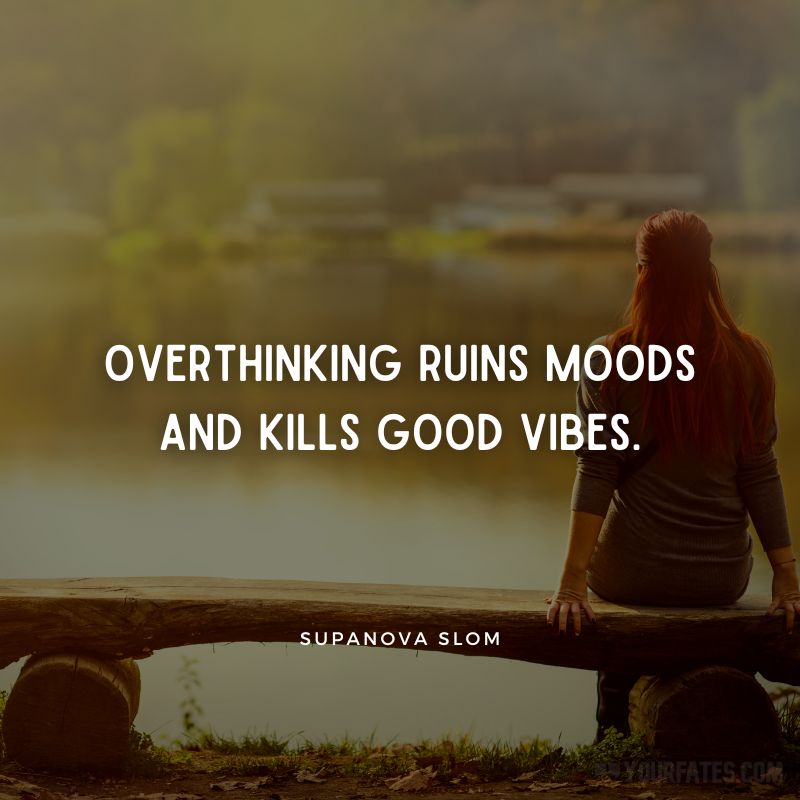 “I’m too open-minded that I don’t know what to mind anymore.” – Ahmed Mostafa

“The primary cause of unhappiness is never the situation, but your thoughts about it. Be aware of the thoughts you are thinking.” – Eckhart Tolle

“Don’t overthink things. Sometimes you can convince your head not to listen to your heart. Those are the decisions you regret for the rest of your life.” – Leah Braemel

“If you spend too much time thinking about a thing, you’ll never get it done.” –Bruce Lee

“Most misunderstandings in the world could be avoided if people would simply take the time to ask, “What else could this mean?” – Shannon L. Alder

“The sharpest minds often ruin their lives by overthinking the next step, while the dull win the race with eyes closed.” – Bethany Brookbank

“Too much thinking leads to paralysis by analysis.” – Robert Herjavec

“Don’t get too deep, it leads to overthinking, and overthinking leads to problems that don’t even exist in the first place.” – Jayson Engay

“Don”t gaze too hard at your belly button Or you will unexpectedly hit rock bottom!” – Ana Claudia Antunes

“Stop overthinking. You can do it.” – Avina Celeste

“Overthinking is often a product of underdoing.” – Yehuda Berg 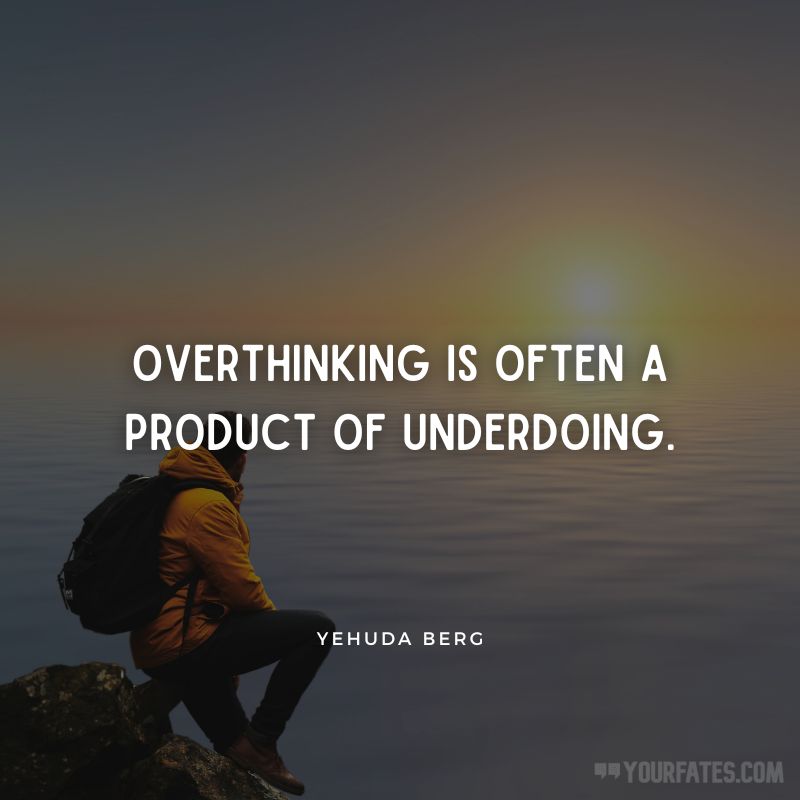 “I admire the linear and decisive way a certain kind of man thinks, to my curlicue boundless overthinking.” – J. Courtney Sullivan

“Overthinking can lead to worrying which leads to anxiety. Anxiety can at times be crippling, leaving people frozen and unable to act”.- Brien Blatt

“Most of us never stop to consider our blessings; rather, we spend the day only thinking about our problems.” – Bernie Siegel 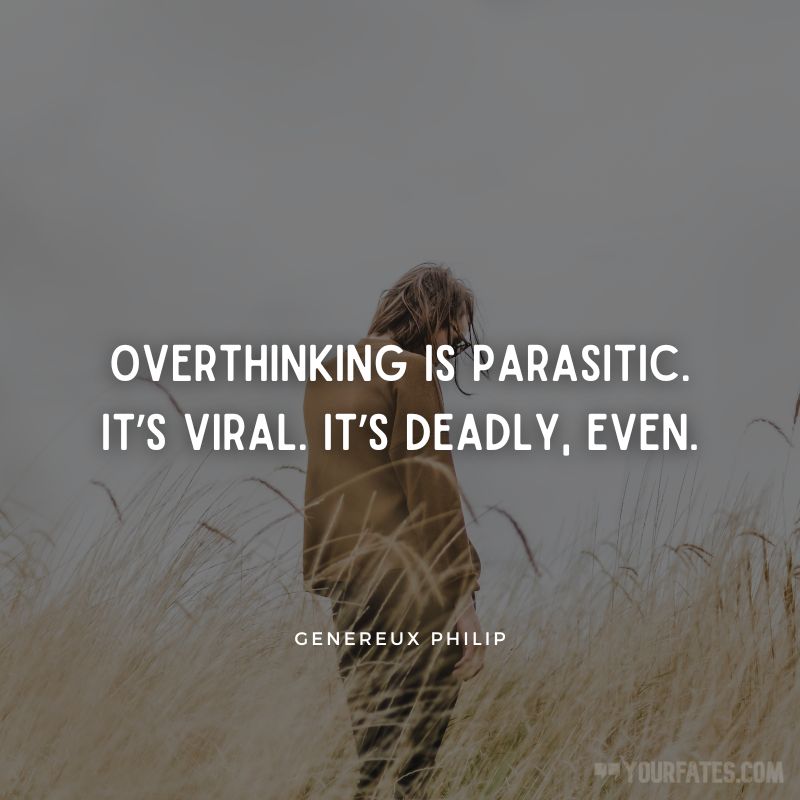 “While you were overthinking, you missed everything worth feeling.” – Nitya Prakash

“The main things to rebel against – overproduction, too much technology, overthinking.” – Jack White

“I have found that sometimes I do better working on a crazy schedule. It gives me less time to overthink things and forces me to be present.” – Torrey DeVitto

“The trouble with most people is that they think with their hopes or fears or wishes rather than with their minds.” – Will Durant

“Once you start overthinking it, it’s like it ain’t a feeling no more.” – Dreezy

“We were made to be distracted by life, by story.” – Donald Miller

“Thinking will not overcome fear, but action will.” – W. Clement Stone 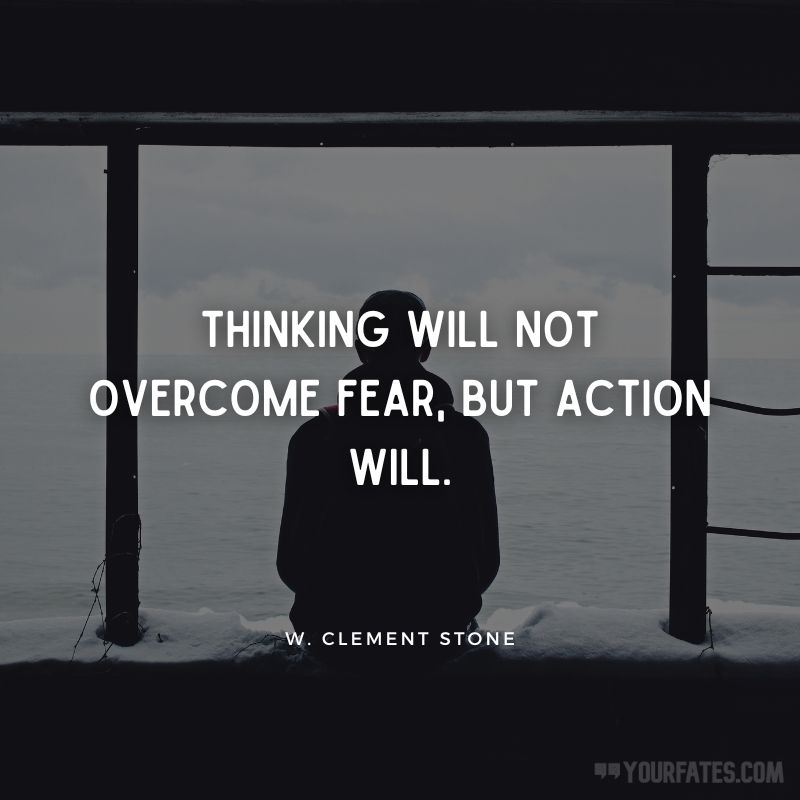 “A crowded mind, leaves no space or a peaceful heart.” – Christine Evangelou

“My father taught me not to overthink things, that nothing will ever be perfect, so just keep moving and do your best.” – Scott Eastwood

“Nothing can harm you as much as your own thoughts unguarded.” – Buddha

“It’s a good idea always to do something relaxing prior to making an important decision in your life.” – Paulo Coelho

“You don’t have to control your thoughts. You just have to stop letting them control you.” – Dan Millman 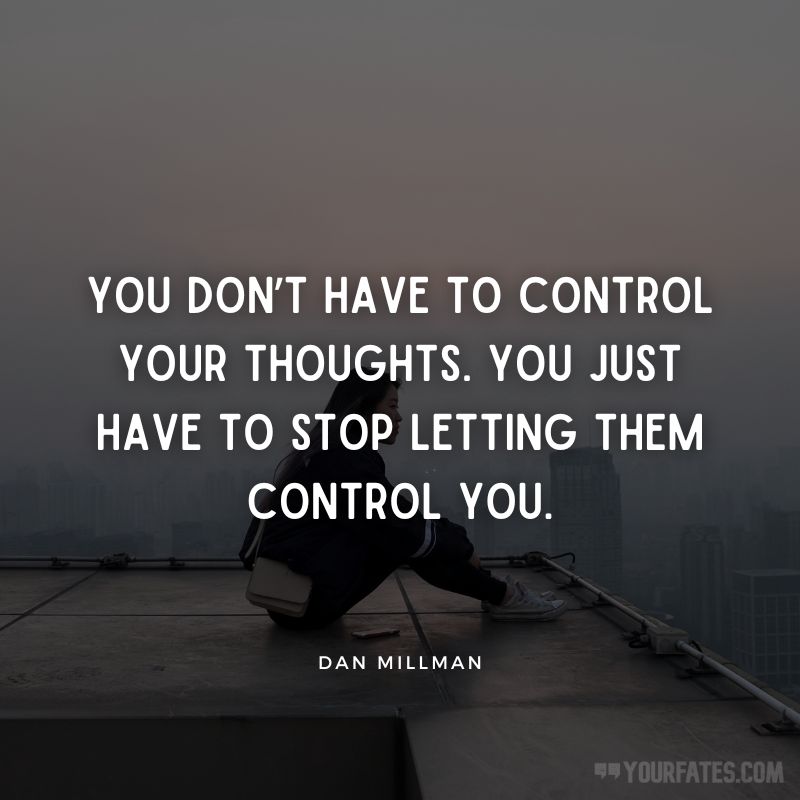 “The best things happen when you’re not overthinking it.” – Ben Zobrist

“When you overthink you originate obstacles that never existed.” – Amit Kalantri

“Thoughts are like an open ocean, they can either move you forward within its waves, or sink you under deep into its abyss.” – Anthony Liccione

“Don’t think. Thinking is the enemy of creativity. It’s self-conscious, and anything self-conscious is lousy. You can’t try to do things. You simply must do things.” – Ray Bradbury

“To end hunger of overthinking, you need to eat positive attitude and happiness.” – Genereux Philip

“Overthinking uses energy and leads to activity with no action. That is one particular problem many will face. Questology is the answer to cure this cancer.” – Thomas Vato

“To think too much is a disease.” – Fyodor Dostoyevsky

“Thinking too much leads to paralysis by analysis. It’s important to think things through, but many use thinking as a means of avoiding action.” – Robert Herjavec 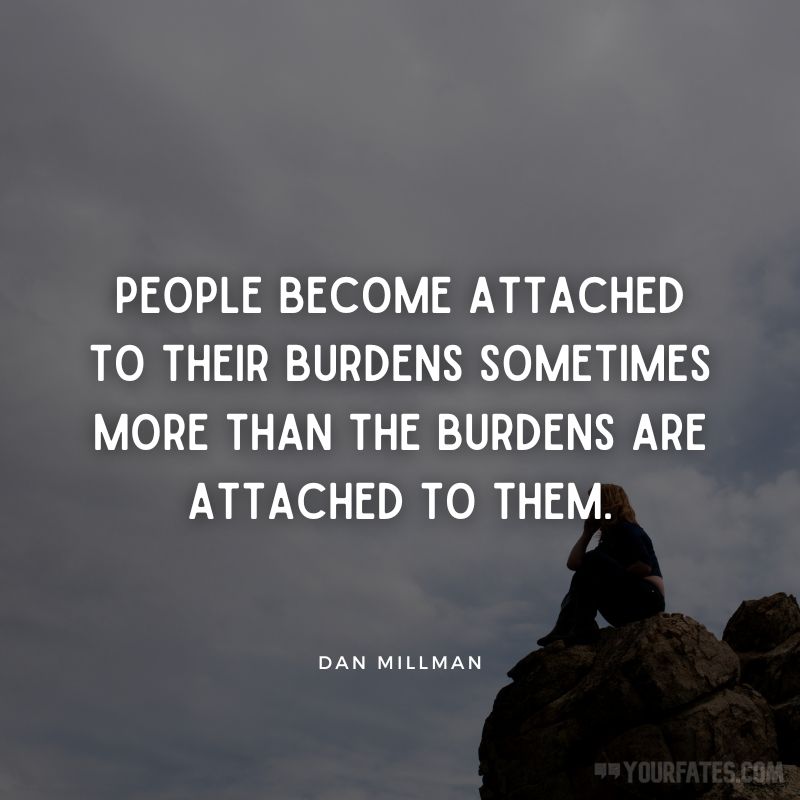 “You only have control over three things in your life, the thoughts you think, the images you visualize, and the actions you take.” – Jack Canfield

“Nothing in life is more remarkable than the unnecessary anxiety which we endure, and generally create ourselves.” – Benjamin Disraeli

Overthinking has never helped anyone. It is another way to procrastinate actions. We hope you have enjoyed these Overthinking Quotes by famous authors, philosophers, and other personalities and get good reasons to work instead of overthink.

We hope you like these collections of Overthinking Quotes. Also, If you’ve found us useful, please do consider telling your friends about it. All you have to do is send these quotes on WhatsApp and ask them to subscribe to us.

81 Grace Quotes That Will Motivate You

71 Soccer Quotes That Will Inspire You To Hit The Goal

70 Fire Quotes To Ignite Your Soul

135 Discipline Quotes To Give You Direction

95 Feminism Quotes That Will Uplift You

80 Journey Quotes That Will Inspire You