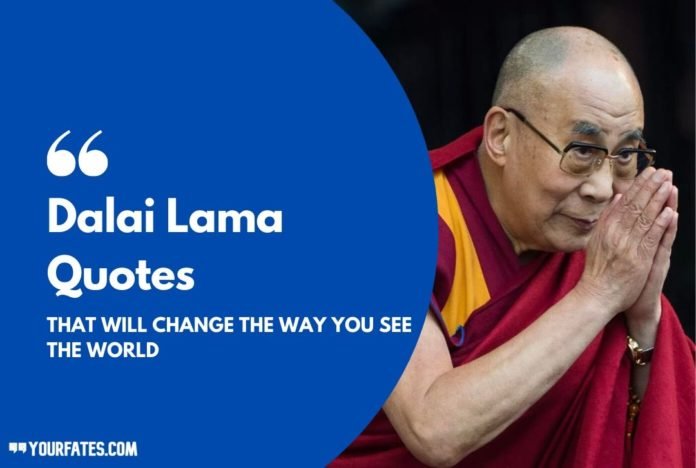 Our prime purpose in this life is to help others, and if you can’t help them, at least don’t hurt them. – Dalai Lama

Dalai means ‘Ocean’ and Lama means ‘Teacher’. Eventually, the Dalai Lama means a teacher who has knowledge as deep as the ocean. Dalai Lama is not a name but the highest post in Buddhism religion. Let’s look into the famous quotes by the Dalai Lama to gain some wisdom. We have brought you this amazing collection of Dalai Lama Quotes and Sayings that will feed your mind with peace and wisdom.

The Dalai Lama is a person with great knowledge who is chosen as god-king by Buddhists. Gyalwa Rinpoche is the 14th and current Dalai Lama. He was born in Tibet to a farming family. His father used to be ill before his birth but his health conditions became better after the Dalai Lama came to the world. People believed then only that the child is extraordinary. His Holiness began with an education at the age of six which was divided into five major and five minor subjects. At the age of 23, his holiness had a final examination which he passed with honors. The Dalai Lama began exile in India when China invaded the peaceful country, Tibet. He was followed by tens of thousands of Tibetans and he resided in a Dharmshala in Himachal Pradesh.

He is recognised by the whole world because of his teachings of peace. He has been awarded the Nobel Peace Prize for the recognition of non-violence. His teachings are about peace, non-violence, humanity, kindness, forgiveness, and helping others. He believed that humanity is the biggest religion.

Here’s the one for the most famous Buddhist teacher in the world. Presenting you famous Dalai Lama Quotes and Sayings:

Don’t forget to also read out the handpicked collection of Buddha Quotes that can change your life.

“Share your knowledge. It is a way to achieve immortality.” – Dalai Lama

“If you think you are too small to make a difference, try sleeping with a mosquito.” – Dalai Lama 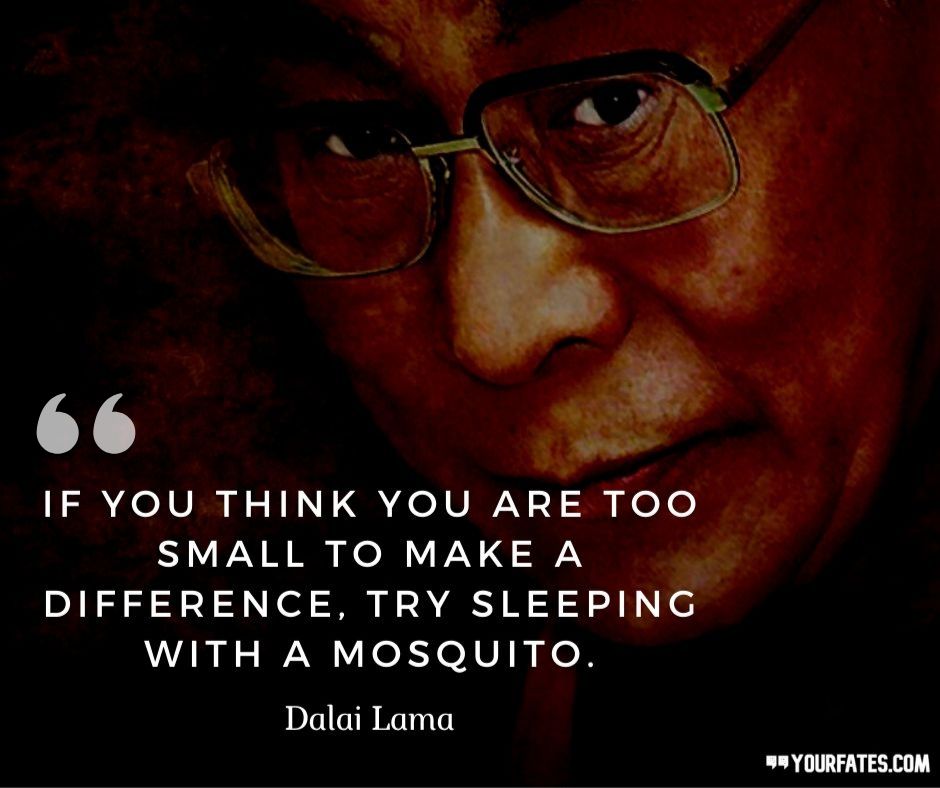 “We can live without religion and meditation, but we cannot survive without human affection.” – Dalai Lama

“Open your arms to change, but don’t let go of your values.” – Dalai Lama 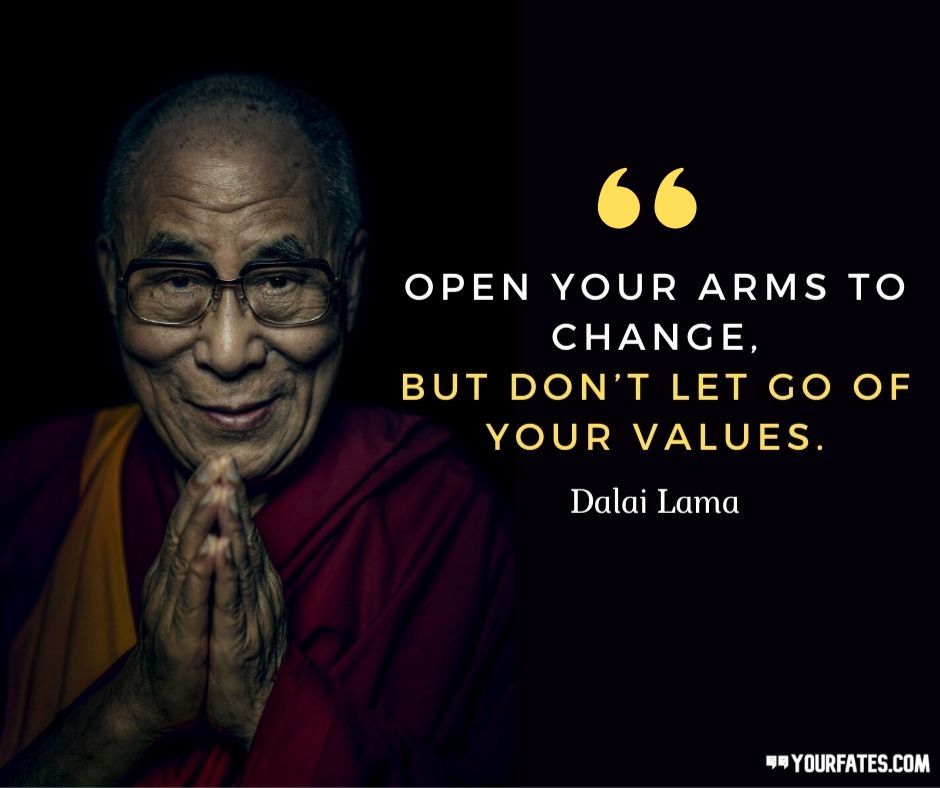 “We are all here on this planet as tourists. None of us can live here forever.” – Dalai Lama

“We are the controller of technology. If we become slaves to technology, then that’s not good.” ― Dalai Lama

“A truly compassionate attitude toward others does not change even if they behave negatively or hurt you.” ― Dalai Lama 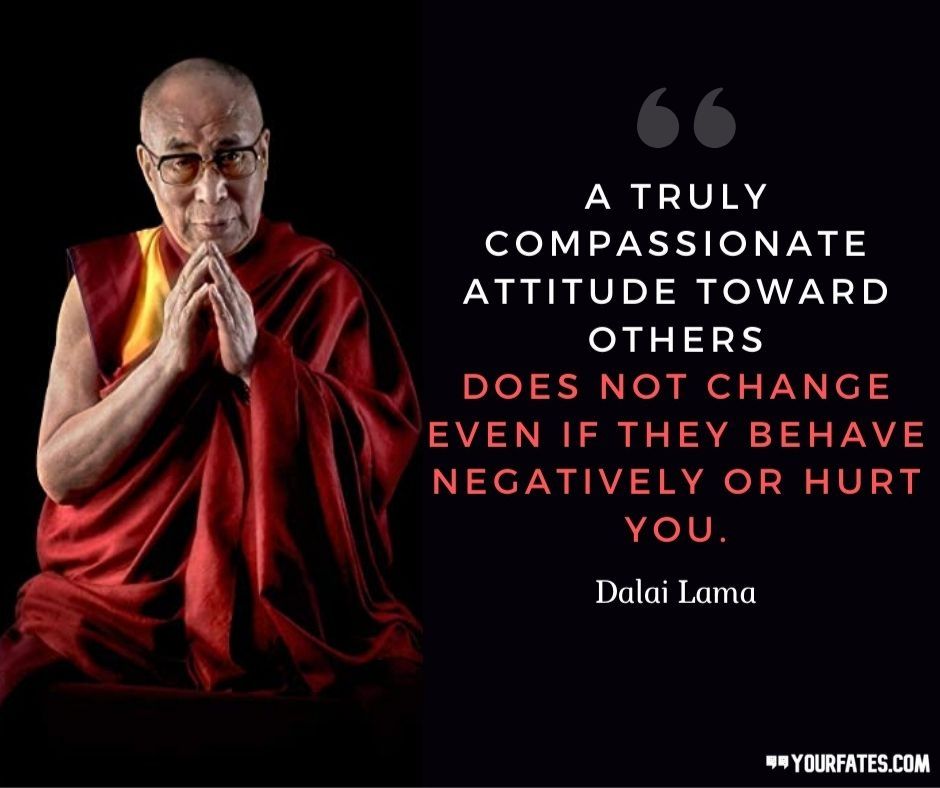 “Human potential is the same for all. Your feeling, “I am of no value”, is wrong. Absolutely wrong. You are deceiving yourself. We all have the power of thought – so what are you lacking? If you have willpower, then you can change anything. It is usually said that you are your own master.” ― Dalai Lama

“Neither a space station nor an enlightened mind can be realized in a day.” – Dalai Lama

“The more you are motivated by Love, The more Fearless & Free your action will be.”― Dalai Lama

“Give the ones you love wings to fly, roots to come back, and reasons to stay.” ― Dalai Lama

“Happiness is not something ready-made it comes from your own actions.” – Dalai Lama

“In order to carry a positive action, we must develop here a positive vision.” – Dalai Lama

“Love is the absence of judgment.” ― Dalai Lama

“We can never obtain peace in the outer world until we make peace with ourselves.” – Dalai Lama

“Remember that not getting what you want is sometimes a wonderful stroke of luck.” – Dalai Lama

“With the realization of one’s own potential and self-confidence in one’s ability, one can build a better world.” – Dalai Lama

“The planet does not need more successful people. The planet desperately needs more peacemakers, healers, and lovers of all kinds.” – Dalai Lama

“When we feel love and kindness towards others, it not only makes others feel loved and cared for, but it also helps us to develop inner happiness and peace.”  – Dalai Lama

“Choose to be optimistic, it feels better.” – Dalai Lama

“When you talk, you are repeating what you already know. But if you listen, you may learn something new.” – Dalai Lama

“Live a good, honorable life. Then when you get older and think back, you’ll be able to enjoy it a second time.” – Dalai Lama

“Old friends pass away, new friends appear. It is just like the days. An old day passes, a new day arrives. The important thing is to make it meaningful: a meaningful friend – or a meaningful day.” ― Dalai Lama

“Love and compassion are necessities, not luxuries. Without them, humanity cannot survive.” — Dalai Lama

“A good friend who points out mistakes and imperfections and rebukes evil is to be respected as if he reveals the secret of some hidden treasure.” ― Dalai Lama

“The way to change other’s minds is with affection and not anger.” ― Dalai Lama

“Judge your success by what you had to give up in order to get it.” – Dalai Lama

“Peace only last where human rights are respected, where the people are fed, and where individuals and nations are free.” – Dalai Lama

“The goal is not to be better than the other man, but your previous self.” – Dalai Lama

“Instead of wanting more, give thanks for the blessings you already have.” – Dalai Lama

Also, check out these insightful Meditation Quotes to energize your inner soul

“In the practice of tolerance, one’s enemy is the best teacher.” ― Dalai Lama

“Because we all share this planet earth, we have to learn to live in harmony and peace with each other and with nature. This is not just a dream, but a necessity.” ― Dalai Lama

“Be kind whenever possible. It is always possible.” – Dalai Lama

“Remember that sometimes not getting what you want is a wonderful stroke of luck.” – Dalai Lama

“There are only two days in the year that nothing can be done. One is called yesterday and the other is called tomorrow, so today is the right day to love, believe, do, and mostly live.” – Dalai Lama

“Don’t let the behavior of others destroy your inner peace.” – Dalai Lama

“We can let the circumstances of our lives harden us so that we become increasingly resentful and afraid, or we can let them soften us, and make us kinder. You always have the choice.” – Dalai Lama

“The roots of all goodness lie in the soil of appreciation for goodness.” – Dalai Lama

“The challenge today is to convince people of the value of truth, honesty, compassion, and concern for others.” – Dalai Lama

“In the practice of tolerance, one’s enemy is the best teacher.” – Dalai Lama 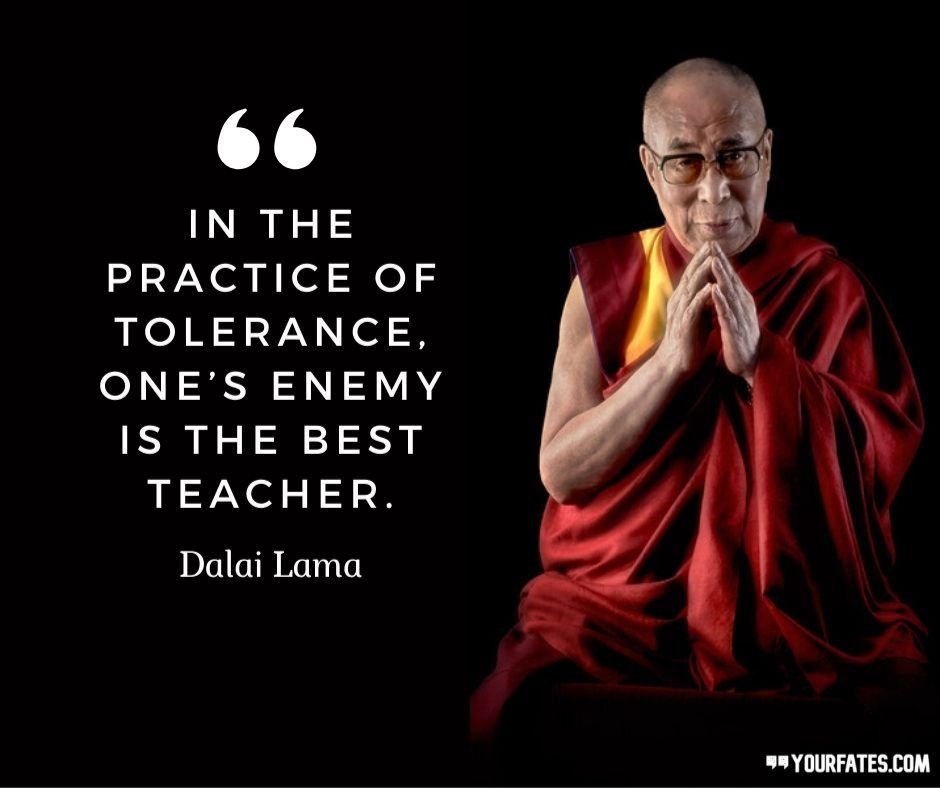 “Anger or hatred is like a fisherman’s hook. It is very important for us to ensure that we are not caught by it.” – Dalai Lama

“Irrespective of whether we are believers or agnostics, whether we believe in God or karma, moral ethics is a code which everyone is able to pursue.” ― Dalai Lama

“Happiness doesn’t always come from a pursuit. Sometimes it comes when we least expect it.” – Dalai Lama

“When we are motivated by compassion and wisdom, the results of our actions benefit everyone, not just our individual selves or some immediate convenience. When we are able to recognize and forgive the ignorant actions of the past, we gain strength to constructively solve the problems of the present.” ― Dalai Lama

“Compassion is the radicalism of our time.” ― Dalai Lama

“If someone has a gun and is trying to kill you, it would be reasonable to shoot back with your own gun.” ― Dalai Lama

“Peace does not mean an absence of conflicts; differences will always be there. Peace means solving these differences through peaceful means; through dialogue, education, knowledge; and through humane ways.” ― Dalai Lama

“Through violence, you may ‘solve’ one problem, but you sow the seeds for another.” – Dalai Lama

“Where ignorance is our master, there is no possibility of real peace.” – Dalai Lama

“Anger is the ultimate destroyer of your own peace of mind.” – Dalai Lama

“There is only one important point you must keep in your mind and let it be your guide. No matter what people call you, you are just who you are. Keep to this truth. You must ask yourself how is it you want to live your life. We live and we die, this is the truth that we can only face alone. No one can help us, not even the Buddha. So consider carefully, what prevents you from living the way you want to live your life?” ― Dalai Lama

“Compassion naturally creates a positive atmosphere, and as a result you feel peaceful and content.” – Dalai Lama

“Remember that sometimes not getting what you want is a wonderful stroke of luck.” ― Dalai Lama

“I defeat my enemies when I make them my friends.”― Dalai Lama 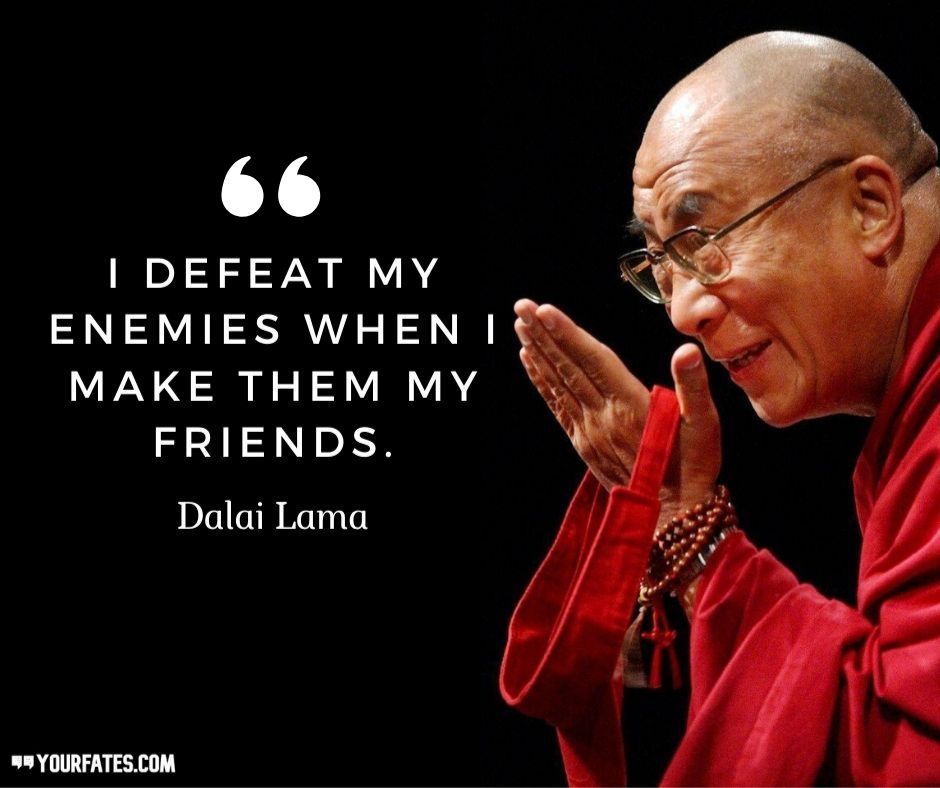 “It is under the greatest adversity that there exists the greatest potential for doing good, both for oneself and others.” ― Dalai Lama

“Time passes unhindered. When we make mistakes, we cannot turn the clock back and try again. All we can do is use the present well.” ― Dalai Lama

What are some famous quotes from the Dalai Lama?

Reflection of compassion and ocean of knowledge- Dalai Lama is the personality to get inspired from. We hope you learn values like forgiveness, truth, and wisdom from these famous Dalai Lama Quotes and Sayings.

We hope you like these collections of Dalai Lama Quotes. Also, If you’ve found us useful, please do consider telling your friends about it. All you have to do is send these quotes on WhatsApp and ask them to subscribe to us.