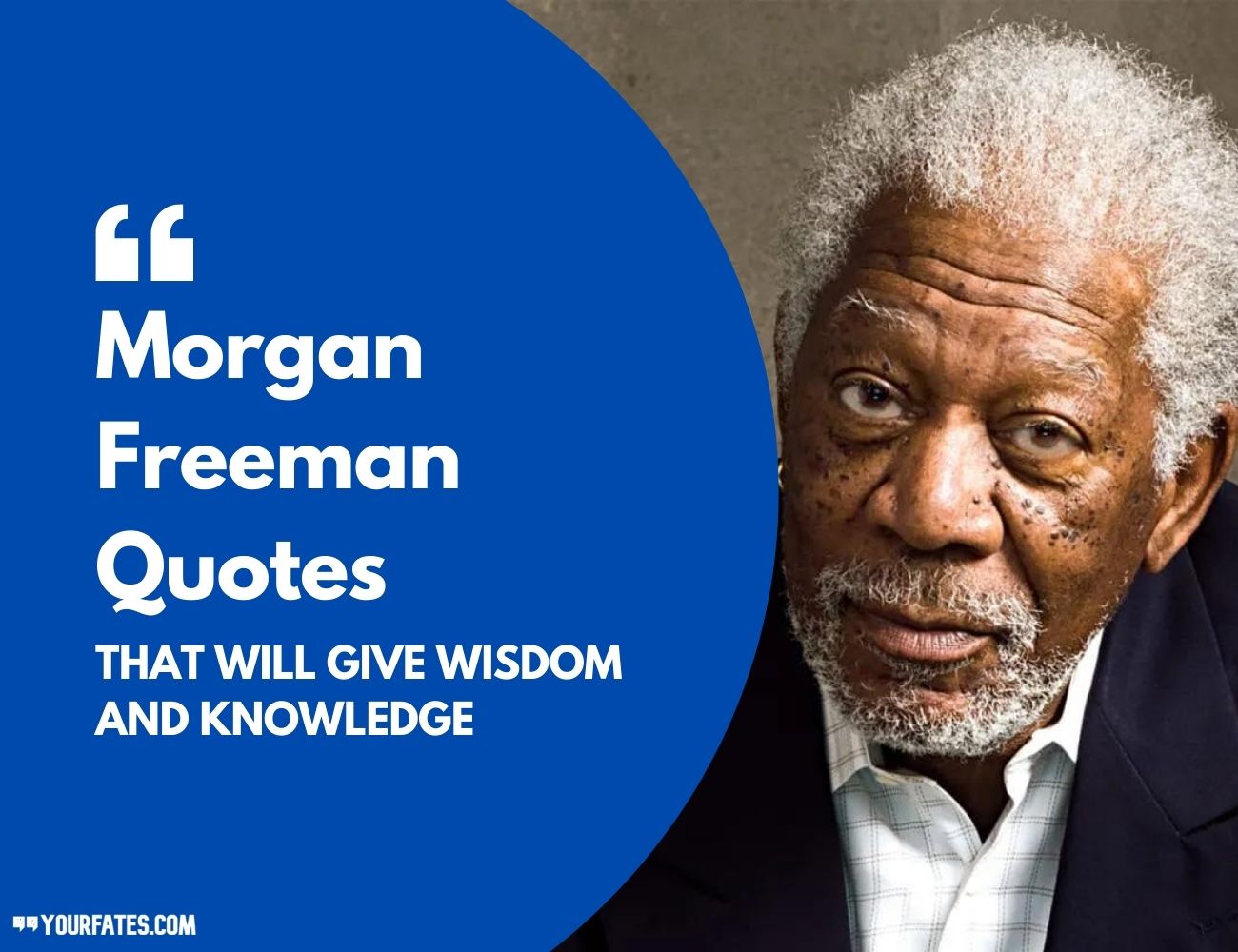 “This is one of the truths of the universe, and you heard it first from here, whatever we decide we want to do is what we do.”

Sometimes in life, we all need positive and some energizing words to take us forward in a confident way. At some point, we might lose hope, curse fate for gambling our lives and ruining it. It takes us time to realize that we need to overcome the trouble and handle the problems in a positive approach to be strong for the future. Morgan Freeman Quotes and Sayings will inspire and motivate you to move forward and be strong.

Morgan Freeman is a prominent actor, producer, and director. In his career journey, he has played various impressive characters and dynamic roles.
He gained popularity through his hard work and dedication in his late 50’s, until then, he didn’t receive the recognition which he deserved. But he never gave up and this shows the willpower and attitude.

He has appeared in more than 100 movies and gave many hits. Some of his most popular movies are ‘The Shawshank Redemption, ‘Robin Hood: Prince Of Thieves’, ‘Driving Miss Daisy’, and ‘Million Dollar Baby’. He has received several prestigious awards and accolades, including one Oscar award for his performance in ‘Million Dollar Baby’.

1. “As you grow in this business, you learn how to do more with less.” – Morgan Freeman

2. “Attacking people with disabilities is the lowest display of power I can think of.” – Morgan Freeman

3. “Very often, you know, you stop walking because you say, ‘Well, I’m tired of climbing this hill. I’m never going to get to the top.’ And you’re only two steps from the top.” – Morgan Freeman

4. “The best way to guarantee a loss is to quit.” – Morgan Freeman

5. “Don’t be afraid of what you want. This is your time. The barriers are down.” – Morgan Freeman 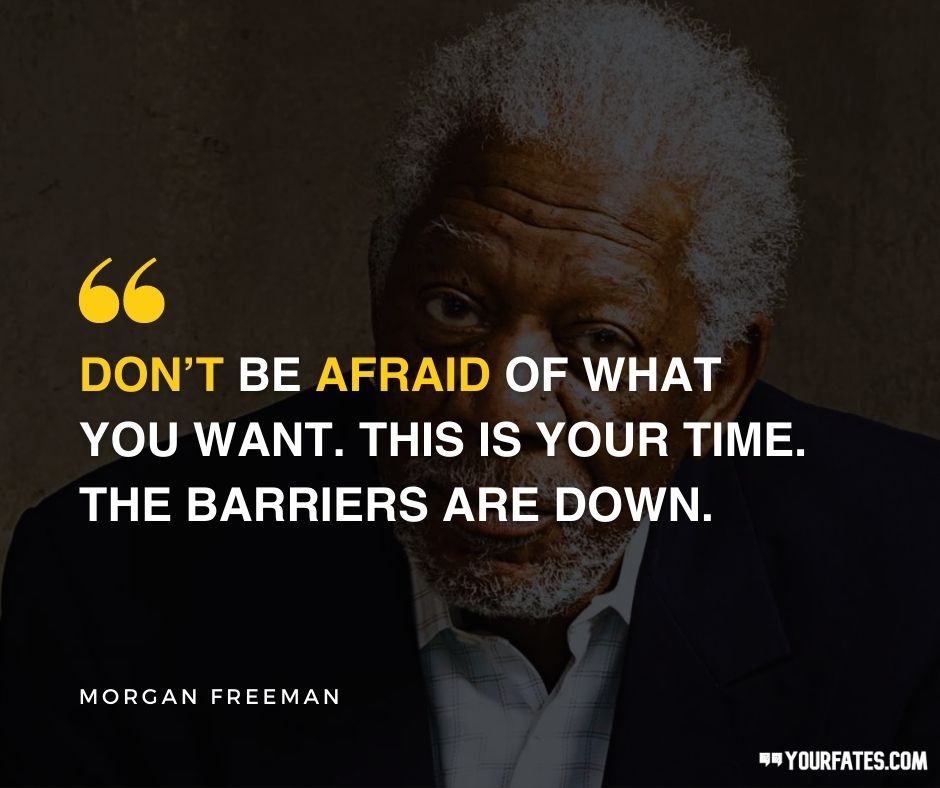 6. “Don’t be different just for different’s sake. If you see it differently, function that way. Follow your own muse, always.” – Morgan Freeman

7. “We humans are more concerned with having than with being.” – Morgan Freeman

8. “Martin Luther King Jr. is remembered as our prince of peace, of civil rights. We owe him something major that will keep his memory alive.” – Morgan Freeman

9. “One of the things you can always depend on – this is one of the truths of the universe, and you heard it first from here – whatever we decide we want to do is what we do.” – Morgan Freeman

10. “How do we change the world? One Random Act of Kindness at a time.” – Morgan Freeman

11. “Never let pride be your guiding principle. Let your accomplishments speak for you.” – Morgan Freeman

12. “If you dream you’ve got to dream that it’s going to happen. Remember that. If you dream, you have to imagine that it will actually happen.” – Morgan Freeman

13. “Challenge yourself; it’s the only path which leads to growth.” – Morgan Freeman

14. “I’m not intimidated by lead roles. I’m better in them. I don’t feel pressure. I feel released at times like that. That’s what I’m born to do.” – Morgan Freeman

15. “Let me tell you what justice is. Justice is the law. And that man’s feeble attempt to lay down the principles of decency.” – Morgan Freeman 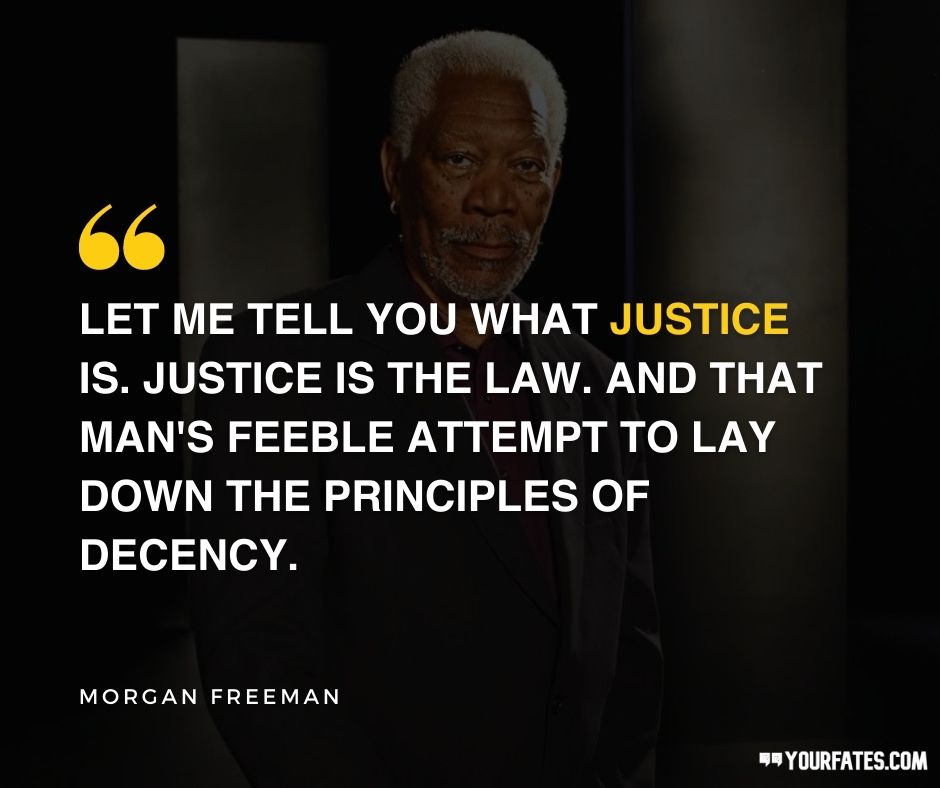 18. “Literacy could be the ladder out of poverty.” – Morgan Freeman

20. “I once heard a wise man say there are no perfect men. Only perfect intentions.” – Morgan Freeman

21. “The highest power is the human mind. That’s where God came from and my belief in God is my belief in myself.” – Morgan Freeman

23. “I don’t have to work. I could stop and never have to worry about paying the rent. I’m working for the joy of doing it.” – Morgan Freeman

24. “I think you have to be left-brained, to a certain extent, to understand science. I can talk about it, but I can’t do it.” – Morgan Freeman

25. “It’s sort of well-known that anytime any catastrophe happens anywhere in the world, they can count on the United States for help.” – Morgan Freeman

26. “I don’t know; every man has his breaking point.” – Morgan Freeman

28. “Marketing only really works with word of mouth.” – Morgan Freeman

29. “Hope is a dangerous thing. Hope can drive a man insane.” – Morgan Freeman 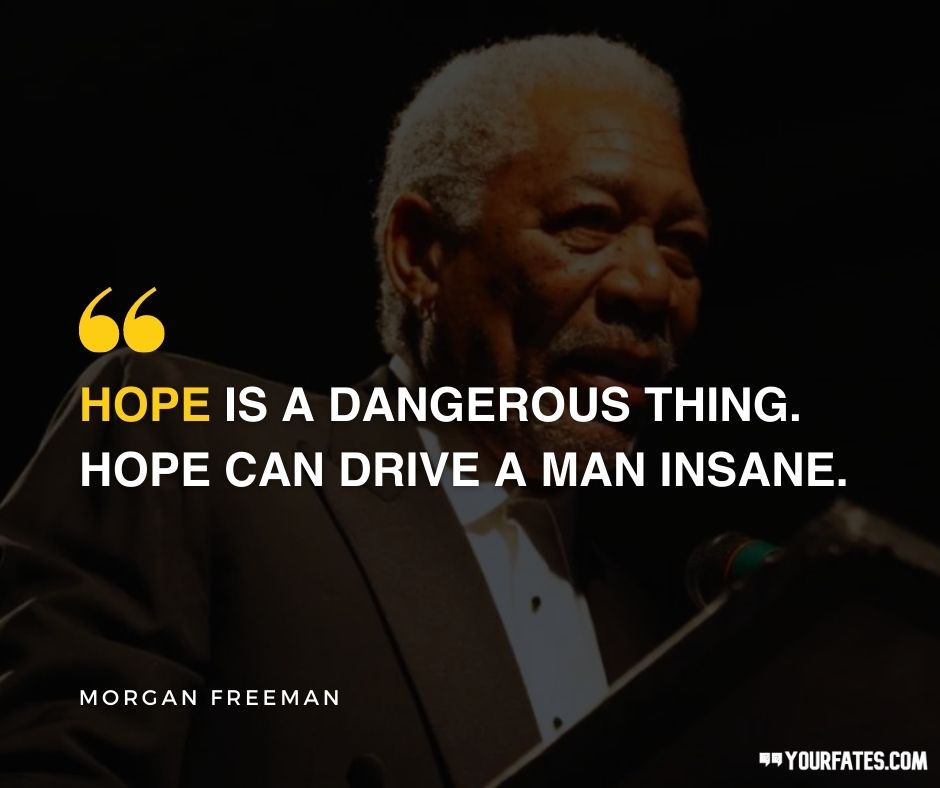 30. “There’s not a day goes by I don’t feel regret. Not because I’m in here, because you think I should. I look back on the way I was then: a young, stupid kid who committed that terrible crime. I want to talk to him. I want to try to talk some sense to him, tell him the way things are. But I can’t.” – Morgan Freeman

31. “I find I’m so excited, I can barely sit still or hold a thought in my head. I think it’s the excitement only a free man can feel, a free man at the start of a long journey whose conclusion is uncertain.” – Morgan Freeman

32. “I have to remind myself that some birds aren’t meant to be caged. Their feathers are just too bright. And when they fly away, the part of you that knows it was a sin to lock them up does rejoice. But still, the place you live in is that much more drab and empty that they’re gone.” – Morgan Freeman

34. “Believe what you want. These walls are funny. First, you hate ‘em, then you get used to ‘em. After long enough, you get so you depend on ‘em. That’s ‘institutionalized.’” – Morgan Freeman

35. “They send you here for life, and that’s exactly what they take. The part that counts, anyway.” – Morgan Freeman

36. “There’s a con like me in every prison in America, I guess. I’m the guy who can get it for you. Cigarettes, a bag of reefer if you’re partial, a bottle of brandy to celebrate your kid’s high school graduation. Damn near anything, within reason. Yes, sir, I’m a regular Sears & Roebuck.” – Morgan Freeman

37. “In prison, a man’ll do most anything to keep his mind occupied.” – Morgan Freeman

38. “You want to retire from a job you’re not that all enamoured with. I love what I do. I want to keep doing it till I can’t get out of bed doing it.” – Morgan Freeman

40. “Life doesn’t offer you promises whatsoever so it’s very easy to become, ‘Whatever happened to…?’ It’s great to be wanted. I spent a few years not being wanted and this is better.” – Morgan Freeman

41. “If you live a life of make-believe, your life isn’t worth anything until you do something that does challenge your reality.” – Morgan Freeman 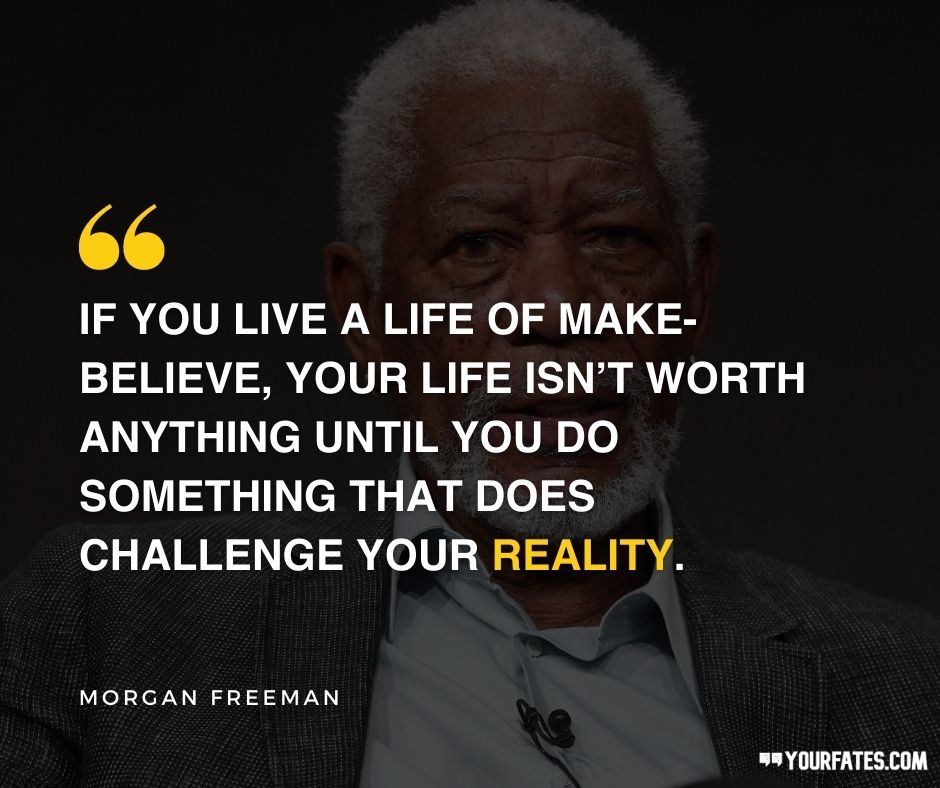 42. “Insanity is coasting through life in a miserable existence when you have a caged lion locked inside and the key to release it.” – Morgan Freeman

44. “If your life turns out to be good and you have a tremendous amount of luck in your life, it’s a good thing to turn around and make it work for others.” – Morgan Freeman

45. “Learning how to be still, to really be still and let life happen – that stillness becomes a radiance.” – Morgan Freeman

46. “If you look back on your life and where you started from it’s like looking back down a mountain back to the desert floor. It’s like now I can’t believe I had whatever it takes or perceived whatever it took to get here.” – Morgan Freeman

48. “Is listening important? I can’t think of a single walk of life where it wouldn’t be.” – Morgan Freeman 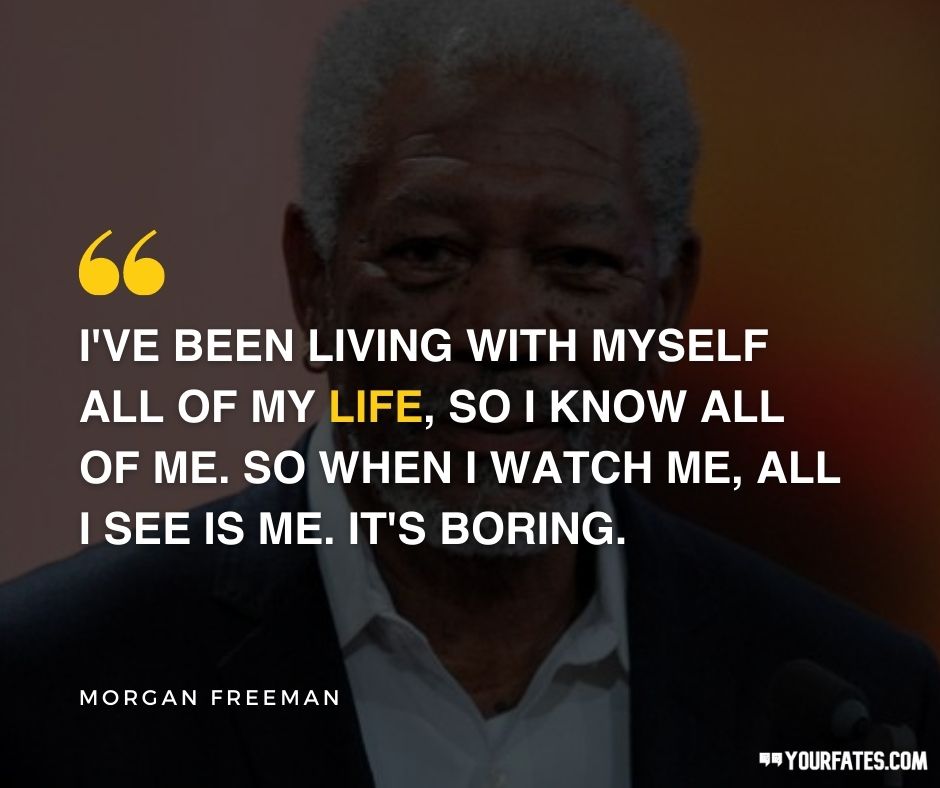 50. “I’ve always been a fan of or desired to or responded to variety. I like variety in life, so variety in work is a must.” – Morgan Freeman

51. “All my life, all my life that I can, as far back as I can remember, I saw my first movie when I was six years old. And since then I wanted to do that. I wanted to be a part of that.” – Morgan Freeman

52. “If you think about the very nature of life, I mean, on the very beginning, the development of the first cell divided into two cells. The sole purpose of life has been to pass on what was learned.” – Morgan Freeman

Hope you have enjoyed the legendary Morgan Freeman quotes and sayings. If you haven’t watched any of his movies, then try ‘The Shawshank Redemption’ which is a feel-good movie that teaches you a few life lessons and soothes your mind at the end of the movie.

We hope you like these collections of Best Morgan Freeman Quotes. Also, If you’ve found us useful, please do consider telling your friends about it. All you have to do is send these quotes on WhatsApp and ask them to subscribe to us.