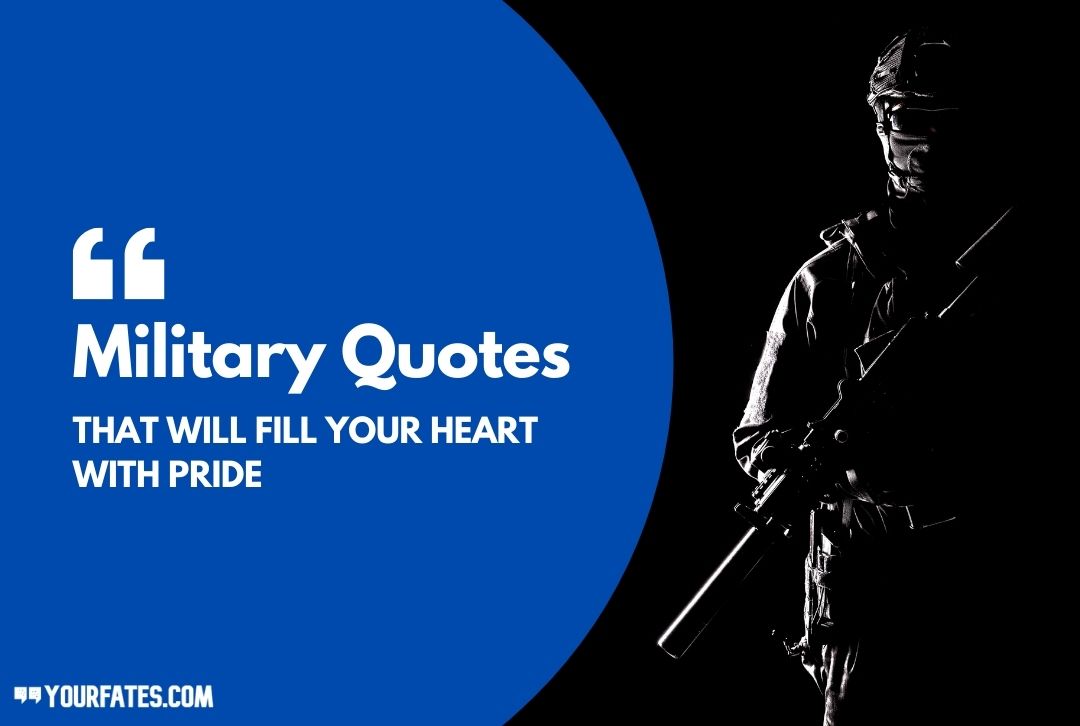 Who are the ones who are the saviors of our lands and the ones who guard the sky and the ones who protect our waters– the answer is our military. They are the people who are keeping their own life and family at stake to keep safe our life and our families, so this one is for our military and the men in them. This is the collection of the most amazing and coolest Military Quotes and Sayings. The collection also contains specific Air Force Quotes, Army Quotes, and Navy Quotes.

In this world full of different types of problems ranging from inter-nation wars, battles, or attacks to natural disasters, militaries of the nation stand in the front line to tackle it. Not only protecting countrymen from bullets and bombs but also protecting them from floods and earthquakes. From airdropping gun supplies to soldiers to airdropping food and medical supplies to commoners, our military men save any day that we face. And hence we are never alone as long as our soldiers got our back.

Their valor is unmatchable and their dedication so worthy that it can move mountains. The best we can do to return something for their duty is that we can hold a genuine place of respect for them in our hearts. They are protecting the country, let us be worthy countrymen that they will feel worthy of protecting. Let us make our country great by fulfilling our duties as the citizen.

So here are these inspiring Military Quotes and Saying that will fill your heart with pride:

1. “The true soldier fights not because he hates what is in front of him, but because he loves what is behind him.” – G.K. Chesterton

2. “To command is to serve, nothing more and nothing less.” – Andre Malraux

3. “We sleep peaceably in our beds at night only because rough men stand ready to do violence on our behalf.” – George Orwell

4. “Whoever said the pen is mightier than the sword obviously never encountered automatic weapons.” – Douglas MacArthur

5. “The object of war is not to die for your country but to make the other bastard die for his.” – Gen. George S. Patton

6. “Military spouses find their strength along the way. Everyone began frightened of distance, deployment, and the unknown.” – The Seasoned Spouse

7. “No man is entitled to the blessings of freedom unless he be vigilant in its preservation.” – Gen. Douglas MacArthur

9. “War is the greatest evil Satan has invented to corrupt our hearts and souls. We should honor our soldiers, but we should never honor war.” – Dean Hughes

10. “Only our individual faith in freedom can keep us free.” – Dwight D. Eisenhower

11. “A hero is someone who has given his or her life to something bigger than oneself.” – Joseph Campbell

12. “There are no secrets to success. It is the result of preparation, hard work, and learning from failure.” – Colin Powell

14. “When I lost my rifle, the Army charged me 85 dollars. That is why in the Navy the Captain goes down with the ship.” – Dick Gregory

15. “If you find yourself in a fair fight, you didn’t plan your mission properly.” – David Hackworth

16. “The patriot’s blood is the seed of freedom’s tree.” – Thomas Campbell

17. “Out of every one hundred men, ten shouldn’t even be there, eighty are just targets, nine are the real fighters, and we are lucky to have them, for they make the battle. Ah, but the one, one is a warrior, and he will bring the others back.”–  Heraclitus

18. “You can have peace. Or you can have freedom. Don’t ever count on having both at  once.” – Robert A. Heinlein

19. “This will remain the land of the free so long as it is the home of the brave.” – Elmer Davis

20. “The brave die never, though they sleep in dust: Their courage nerves a thousand living men.” – Minot J. Savage

22. “We sleep safely at night because rough men stand ready to visit violence on those who would harm us.” – Winston S. Churchill

23. “Never in the field of human conflict was so much owed by so many to so few.” – Winston Churchill

24. “The Navy can lose us the war, but only the Air Force can win it. The fighters are our salvation, but the bombers alone provide the means of victory.” – Winston Churchill

25. “If our Air Forces are never used, they have achieved their finest goal.” – General Nathan Farragut Twining

26. “War is not only a matter of equipment, artillery, group troops or air force; it is largely a matter of spirit or morale.” – Chiang Kai–Shek

27. “Not to have an adequate air force in the present state of the world is to compromise the foundations of national freedom and independence.” – Winston Churchill

28. “When everything seems to be against you, remember that an airplane takes off against the wind, not with it.” – Henry Ford

29. “And then, when I thought about joining the Air Force, flying seemed like a natural extension of the motorcycling experience.” – Duane G Carey

30. “A modern, autonomous, and thoroughly trained Air Force in being at all times will not alone be sufficient, but without it, there can be no national security.” – General Henry H. Arnold

31. “On the battlefield, the military pledges to leave no soldier behind. As a nation, let it be our pledge that when they return home, we leave no veteran behind.” – Dan Lipinski

32. “The army is always the same. The sun and the moon change. The army knows no seasons.” – Frank Nugent

33. “Discipline is the soul of an Army. It makes small numbers formidable; procures success to all of the weak, and esteem to all.” – George Washington

34. “The soldier is the Army. No Army is better than its soldiers. The soldier is also a citizen. In fact, the highest obligation and privilege of citizenship is that of bearing arms for one’s country.” – George S Patton

35. “In war, the army is not merely a pure consumer, but a negative producer.” – Lewis Mumford

36. “It is fatal to enter a war without the will to win it.” – Douglas MacArthur

37. “I am not afraid of an army of lions lead by a sheep; I am afraid of sheep lead by a lion.” – Alexander the Great

39. “The Army is the true nobility of our country.” – Napoleon Bonaparte

40. “Ten soldiers lead wisely will beat a hundred without a head.” – Euripides

41. “The supreme quality for leadership is unquestionably integrity. Without it, no real success is possible, no matter whether it is on a section gang, a football field, in an army, or in an office.” – Dwight D Eisenhower

42. “It doesn’t take a hero to order men into battle. It takes a hero to be one of those men who goes into battle.” – Norman Schwarzkopf

43. “It’s almost worth having been in the army for the joy your freedom gives you.” – John Dos Passos

44. “The army is the true nobility of our country.” – Napoleon Bonaparte

45. “The US Navy has several people on every ship that can navigate by the stars. They don’t fool with that.” – Bill Nye

46. “I will never quit. I persevere and thrive on adversity. … If knocked down, I will get back up, every time. ” – The US Navy Seals

47. “The Coast Guard has long been known as the armed service that gets more done for less.” – Howard Coble

48. “Navy Seals says when you are under pressure you don’t rise to the occasion. You sink to the level of your training. Train well.” – Jon Gordon

49. “The Navy speaks in symbols and you may suit what meaning you choose to the words.” – Patrick O’Brian

50. “A good Navy is not a provocation to war. It is the surest guaranty of peace.” – Theodore Roosevelt

51. “As a Navy SEAL, and sniper, one of the things I learned was that excellence matters.” – Brandon Webb

52. “The wonder is always new that any sane man can be a sailor.” – Ralph Waldo Emerson

53. “Navy Seals, and you thought the sharks were the deadliest predator in the ocean.” –Unknown

We hope you feel as much pride and motivation while reading these as we felt while collecting these. Be proud of your soldiers. Be motivated.

We hope you like these collections of Military Quotes. Also, If you’ve found us useful, please do consider telling your friends about it. All you have to do is send these quotes on WhatsApp and ask them to subscribe to us.