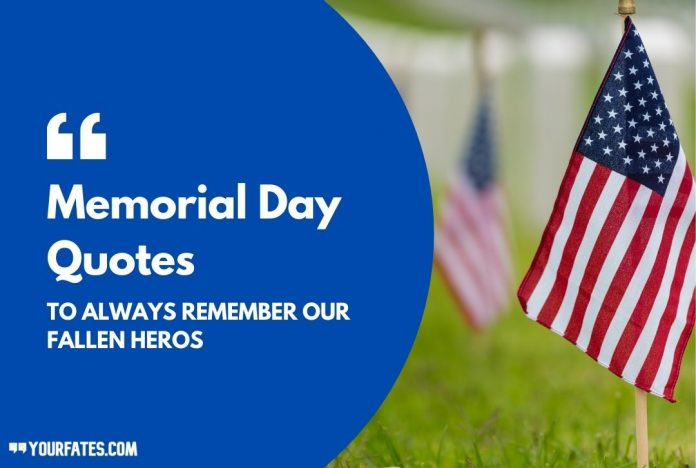 Memorial Day is a federal holiday observed in the United States to remember, honor, and mourn the military personnel who have died in the line of duty while serving in the US Armed Forces. It is observed on the last Monday of May month every year. The origin of this day dates back to the 1860s. So to make your Memorial Day blessed and filled with pride for your soldiers, we have brought these Memorial Day Quotes, Slogans, and Sayings.

Our country is our home and identity in this world. Wherever we go, we carry our nation with us in our patriotism. And the people who guard our nation and who guard the people of our nation are our soldiers and armed forces personnel. And not every soldier who martyred lost his life on the battlefield; some sacrificed their lives while they were working during peace. And that too is an equally important sacrifice on their part.

So to remember all our fallen soldier brothers and sisters, we have brought these respectful Memorial Day Quotes, Slogans, and Sayings. read on and be inspired from the best:

1. “Patriotism is not short, frenzied outbursts of emotion, but the tranquil and steady dedication of a lifetime.” – Adlai Stevenson

2. Patriotism is when love of your own people comes first; nationalism, when hate for people other than your own comes first.” – Charles de Gaulle

3. “America without her soldiers would be like God without His angels.” – Claudia Pemberton

4. “And they who for their country die shall fill an honored grave, for glory lights the soldier’s tomb, and beauty weeps the brave.”- Joseph Rodman Drake

5. “I believe our flag is more than just cloth and ink. It is a universally recognized symbol that stands for liberty, and freedom. It is the history of our nation, and it’s marked by the blood of those who died defending it.” – John Thune

6. “Overall our happy country – over all our Nation spread, is a band of noble heroes– is our Army of the Dead.”- Will Carleton

7. “The willingness of America’s veterans to sacrifice for our country has earned them our lasting gratitude.” – Jeff Miller

8. “I have long believed that sacrifice is the pinnacle of patriotism.” – Bob Riley

9. “There is nothing nobler than risking your life for your country.” – Nick Lampson

10. “Overall our happy country – over all our Nation spread, is a band of noble heroes– is our Army of the Dead.” – Will Carleton

11. “What I can do for my country, I am willing to do.” – Christopher Gadsden

12. “A hero is someone who has given his or her life to something bigger than oneself.” – Joseph Campbell

13. “Veterans are a symbol of what makes our nation great, and we must never forget all they have done to ensure our freedom.”- Rodney Frelinghuysen

14. “For love of country they accepted death, and thus resolved all doubts, and made immortal their patriotism and their virtue.”- James A. Garfield

15. “The legacy of heroes is the memory of a great name and the inheritance of a great example.” – Benjamin Disraeli

16. “Who kept the faith and fought the fight; The glory theirs, the duty ours.”- Wallace Bruce

17. “Our flag does not fly because the wind moves it. It flies with the last breath of each soldier who died protecting it.”- Unknown

19. “This nation will remain the land of the free only so long as it is the home of the brave.”- Elmer Davis

20. “It is foolish and wrong to mourn the men who died. Rather we should thank God such men lived.” – George S. Patton

21. “In the end, we will remember not the words of our enemies, but the silence of our friends.” – Martin Luther King, Jr.

22. “I only regret that I have but one life to lose for my country.” – Nathan Hale

23. “I love America more than any other country in the world, and exactly for this reason, I insist on the right to criticize her perpetually.” – James A. Baldwin

24. “There is nothing wrong with America that cannot be cured with what is right in America.” – William J. Clinton

25. “Patriotism is supporting your country all the time, and your government when it deserves it.” – Mark Twain

27. “If you want to thank a soldier, be the kind of American worth fighting for.” – Unknown

28.  “A man is a patriot if his heart beats true to his country.” – Charles E. Jefferson

29. “You will never do anything in this world without courage.” – Aristotle

30. “Freedom is never more than one generation away from extinction. We did not pass it to our children in the bloodstream. It must be fought for, protected, and handed on for them to do the same, or one day we will spend our sunset years telling our children and our children’s children what it was once like in the United States where men were free.”- Ronald Reagan

31. “Let their remembrance be as lasting as the land they honored.” – Daniel Webster

32. “Our obligations to our country never cease but with our lives.”- John Adams

33. “Never was so much owed by so many few.” – Winston Churchill

34. “To those in uniform serving today and to those who have served in the past, we honor you today and every day.”- Unknown

36. “Heroism is not only in the man but in the occasion. – Calvin Coolidge

37. “It doesn’t take a hero to order men into battle. It takes a hero to be one of those men who goes into battle.”- Norman Schwarzkopf

38. “The brave die never, though they sleep in the dust, their courage nerves a thousand living men.” – Minot J. Savage

40. “The patriot’s blood is the seed of freedom’s tree.” -Thomas Campbell

41. “They are guarding the land when we sleep, they are guarding the waters when we are just walking around; they are guarding our skies every second of the day. And while doing so sometimes they are sacrificing themselves for their country and the countrymen. And the most and the best that we could do for them is to respect them and always remember their sacrifices. So be respectful and get inspired. “A hero is someone who understands the responsibility that comes with his freedom.” – Bob Dylan

42. “Freedom makes a huge requirement of every human being. With freedom comes responsibility.” – Eleanor Roosevelt

43. “Honor to the soldier and sailor everywhere, who bravely bears his country’s cause. Honor, also, to the citizen who cares for his brother in the field and serves, as he best can, the same cause.” –Abraham Lincoln

44. “We cherish too, the Poppy red that grows on fields where valor led, it seems to signal to the skies that blood of heroes never dies.” -Moina Michael

45. “Those who have long enjoyed such privileges as we enjoy forget in time that men have died to win them.” – Franklin D. Roosevelt

46. “Our nation owes a debt to its fallen heroes that we can never fully repay.” – Barack Obama

47. “The highest obligation and privilege of citizenship is that of bearing arms for one’s country” -George S. Patton Jr.

48. “Finally, I wish to remember the millions of Allied servicemen and prisoners of war who lived the story of the Second World War. Many of these men never came home; many others returned bearing emotional and physical scars that would stay with them for the rest of their lives. I come away from this book with the deepest appreciation for what these men endured, and what they sacrificed, for the good of humanity.” -Laura Hillenbrand

49. “Never throughout history has a man who lived a life of ease left a name worth remembering.” – Theodore Roosevelt

50. “No duty is more urgent than that of returning thanks.”- James Allen

51. “No man is entitled to the blessings of freedom unless he be vigilant in its preservation.”- General Douglas MacArthur

52. “Liberty is never unalienable; it must be redeemed regularly with the blood of patriots or it always vanishes. Of all the so-called natural human rights that have ever been invented, liberty is least likely to be cheap and is never free of cost.” -Robert A. Heinlein

54. “Never in the field of human conflict was so much owed by so many to so few.” -Winston S. Churchill

55. “We sleep safely at night because rough men stand ready to visit violence on those who would harm us.” -Winston S. Churchill

56. “Heroes may not be braver than anyone else. They’re just braver 5 minutes longer.” -Ronald Reagan

57. “In the face of impossible odds, people who love this country can change it.” –Barack Obama

58. “Do not forget that the armed forces are the servants of the people. You do not make national policy; it is we, the civilians, who decide these issues and it is your duty to carry out these tasks with which you are entrusted.” -M. A. Jinnah

59. “In the aftermath, we are because they were.” -RJ Heller

60. “So long as the memory of certain beloved friends lives in my heart, I shall say that life is good.” – Helen Keller

61. “As we express our gratitude, we must never forget that the highest appreciation is not to utter the words, but to live by them.” – John F. Kennedy

62. “Regard your soldiers as your children, and they will follow you into the deepest valleys; look on them as your own beloved sons, and they will stand by you even unto death.”- Sun Tzu

64. “That’s what any committed patriot would do: Fight to the last. Defeat your enemy at any cost; then hope you have enough left to rebuild.” -Randolph D. Calverhall

65. “Courage is almost a contradiction in terms. It means a strong desire to live taking the form of readiness to die.”- G.K. Chesterson

We hope you like these collections of Memorial Day Quotes. Also, If you’ve found us useful, please do consider telling your friends about it. All you have to do is send these quotes on WhatsApp and ask them to subscribe to us.