40 Medusa Quotes on Being a Symbol of Strength 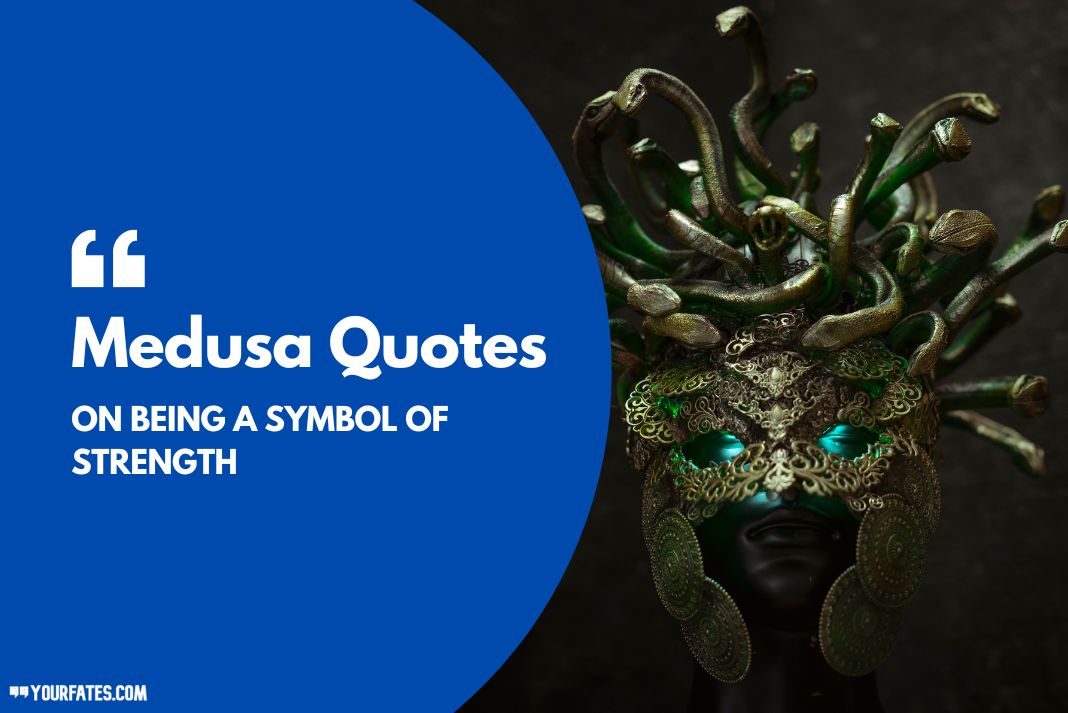 Have you ever wondered what Medusa would look like if she had not been cursed? Amazingly beautiful as before. We have brought you this amazing collection of Medusa Quotes and Sayings that will help you dig into the story of Medusa and get to know the perspective of both sides of the story.

In Greek Mythology, Medusa was one of the three Gorgon sisters who was mortal. Other two sisters were immortal. Medusa was shockingly beautiful. She had long, silky hair and a beautiful body. She was a devotee of Goddess Athena. Medusa was loyal to Athena and vowed to follow her path. There was another God, Poseidon – God of Sea who fell in love with Medusa.

When he expressed his feelings to Medusa, she refused as she was loyal to Athena and could not betray her. But Poseidon seduced Medusa in the temple of Athena. As a punishment, Athena cursed Medusa by turning her hair into snakes. After that, whoever looked into the eyes of Medusa got converted into a stone. There was a reward declared for a person who will cut the head of Medusa.

Many people dared to do so but were converted into stone. But Perseus – Hero of Greek Mythology was successful in killing Medusa.

Story of Medusa is a famous story of Greek. People look at the story with different perspectives.
Some thought about Medusa as an innocent girl while some perceive her as disloyal and deceiver.

Here’s the list of Medusa Quotes and Sayings you will enjoy reading:

Don’t forget to also read our collection of Maya Angelou Quotes about women, love, and life

“If a woman shows too often the Medusa’s head, she must not be astonished if her lover is turned into stone.” – Henry Wadsworth Longfellow

“The terror of the Medusa is thus a terror of castration that is linked to the sight of something.” – Sigmund Freud

“The Medusa of Turritopsis nutricula is biologically immortal and this little creature is a big inspiration for us! He who thinks positively reaches his target!” – Mehmet Murat İldan

“If the delicate flower liked to play Medusa, maybe Karina could take on the role of Perseus.” – Lexi Blake 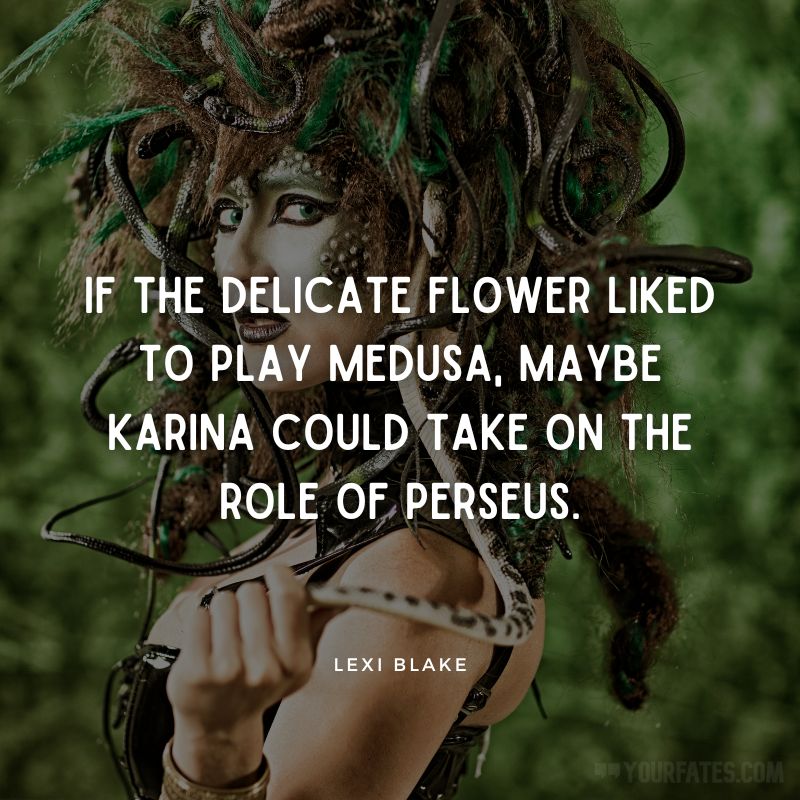 “You’re glad your dad is alive. You feel good that he’s claimed you, and part of you wants to make him proud. That’s why you mailed Medusa’s head to Olympus.” – Rick Riordan

“Fascinated by the glitter of gain, man gazes at the Medusa-like face of greed and stands petrified.” – Manly P. Hall

“Turn around, and keep your eyes closed shut. For if the Gorgon, Medusa, does appear, and you see her, you would never be able to return upward.” – Dante Alighieri

“Well, I’m sorry to disappoint you, boy! That was Medusa’s curse alone. She was the most hideous one in the family.” – Rick Riordan

“I thought Medusa had looked at you, and that you were turning to stone. Perhaps, now you will ask how much you are worth?” – Charlotte Bronte

“The hair upon the Medusa’s head is frequently represented in works of art in the form of snakes, and these once again are derived from the castration complex.” – Sigmund Freud

“Every part of her was still except her hair, which blew round her face in the damp night like Medusa’s serpentine locks rearing to strike.” – Katherine Pine 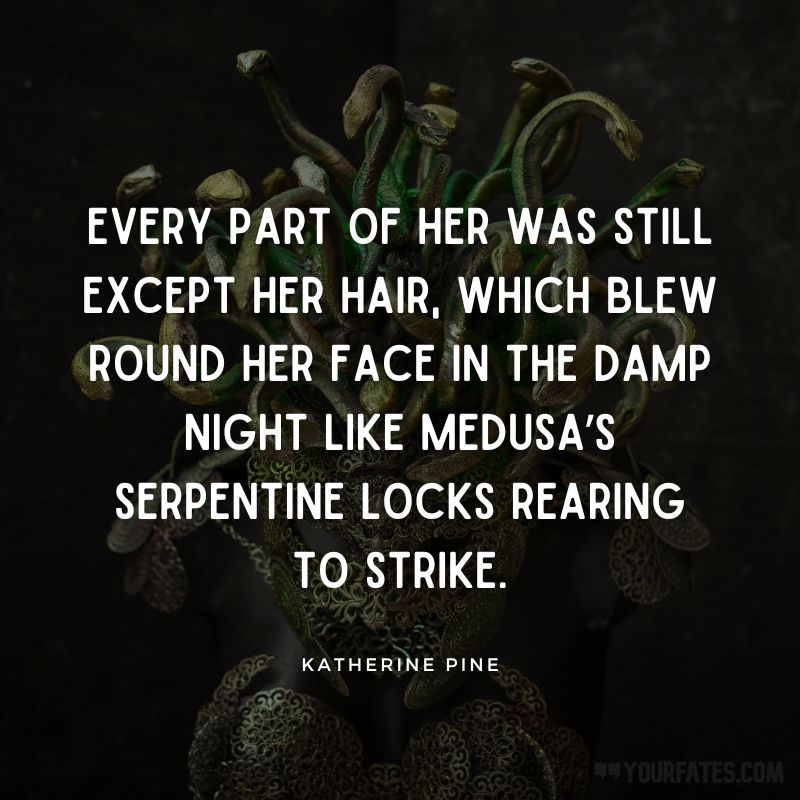 “Beauty is that Medusa’s head which men go armed to seek and sever, and dead will starve and sting forever.” – Archibald MacLeish

“Turn bad thoughts into concrete so you can build a strong foundation.” – Antonia Perdu

“When Medusa looks in the mirror, she sees the Lady of Sorrows.” – Mason Cooley

“The look she gave him in reply would have petrified Medusa.” – Karsten Knight

“I’ve been prepping for my role as Medusa.” – Joaquin Phoenix

“You only have to look at the Medusa straight on to see her. And she’s not deadly. She’s beautiful and she’s laughing.” – Hélène Cixous

“The literary scene is a kind of Medusa’s raft, small and sinking, and one’s instinct when a newcomer tries to clamber aboard is to step on his fingers.” – John Updike

“You cursed my soul, my mind is dead. Eyes like a weapon, snakes on my head. A priestess I was, the pride of Athena. Now I’m banned to live the life of a beast.” – Grave Digger 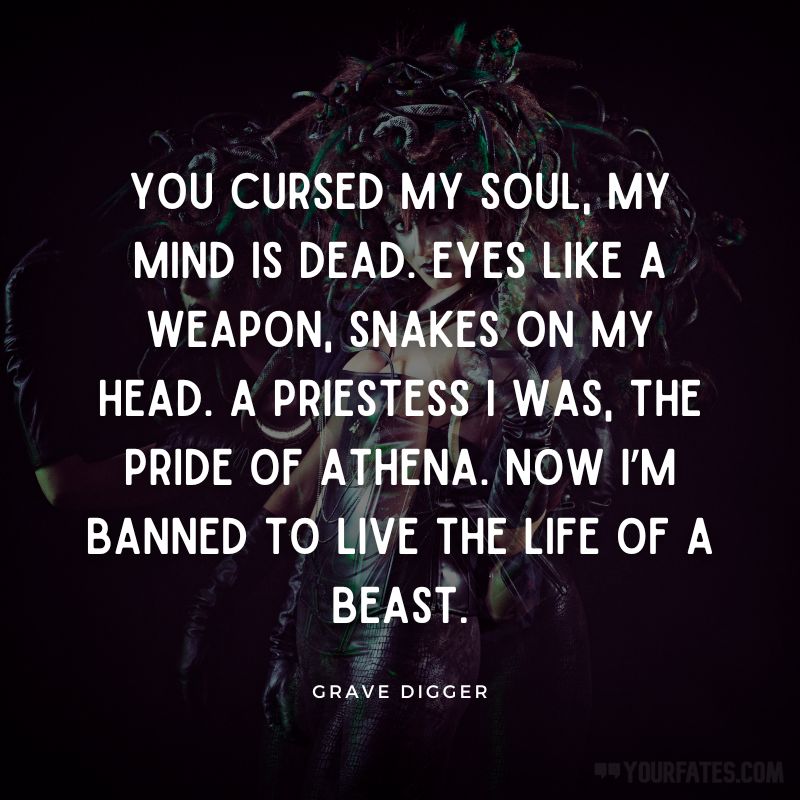 “If a woman shows too often the Medusa’s head, she must not be astonished if her lover is turned into stone.” – Henry Wadsworth Longfellow

“The television, that insidious beast, that Medusa which freezes a billion people to stone every night, staring fixedly, that Siren which called and sang and promised so much and gave, after all, so little.” – Ray Bradbury

“We must kill the false woman who is preventing the live one from breathing.” – Helene Cixous

“I don’t even remember killing Medusa. I don’t remember anything.” – Rick Riordan

“My dirty-blonde hair doesn’t slither and hiss, but the men around me are as cold and hard as stone.” – Skye Warren

“You may gaze at her reflection in still waters of the lake, but don’t look at her directly or death will be your fate.” – Angel Witch

“The sinister, the terrible never deceive: the state in which they leave us is always one of enlightenment.” – Thomas Ligotti

“Tom just stood there, sword in hand, a huge grin on his lips. He stared at Medusa and Medusa stared at him, and in this moment that made his dreams come true, Tom could only think of one thing to say.” – S.J. Kincaid

“Freud was a hero. He descended to the Underworld and met there stark terrors. He carried with him his theory as a Medusa’s head which turned these terrors to stone.” – R. D. Laing

“In mythology, the Medusa can petrify people with a look – which is a good thing, I think. But the Medusa is a unique symbol – something strong. It’s about going all the way.” – Donatella Versace 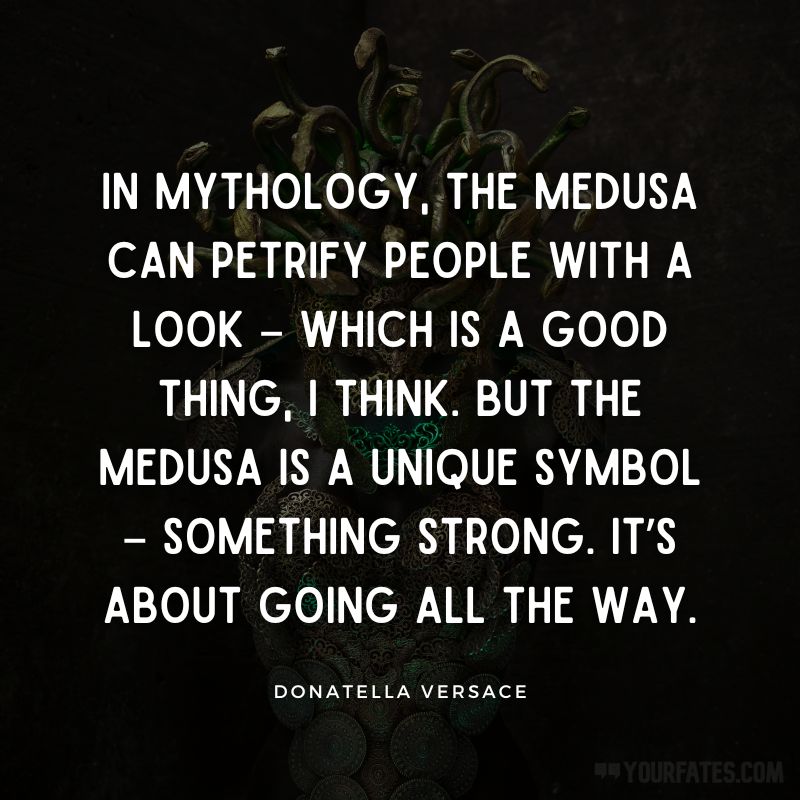 “Pegasus’s dad was poseidon, the god of the sea, and his mom was Medusa and evil Gorgon who had fangs and lizard skin and living snakes for hair. And you thought your family was weird.” – Evan Kuhlman

“Athena’s jealousy made a monster of fair Medusa. I often wonder what beauty my own demons have destroyed.” – Nichole McElhaney

“The luminous winged stallion of the Greeks, Pegasus, emerged from the life force of womanly wisdom in its darkest, most disturbing aspect.” – Linda Kohanov

“She was usually represented as a winged female creature having a head of hair consisting of snakes; unlike the Gorgons, she was sometimes represented as very beautiful.” – Britannica

“A beautiful mortal, Medusa was the exception in the family, until she incurred the wrath of Athena, either due to her boastfulness or because of an ill-fated love affair with Poseidon.”

“Medusa was fascinating to work with because I gave her a snake’s body so that she could pull herself with her hands which gave her a very creepy aura. I didn’t want to animate cosmic gowns.” – Ray Harryhausen

“Most people know who Pegasus is, for instance, but few realize that he was born from the blood of snake-headed Medusa immediately after she was slain by Perseus.” – Linda Kohanov

“You’re going native! Now, put down that ridiculous tray and help me kill this demigod. Or have you forgotten that he’s the one who vaporized Medusa?” – Rick Riordan

“Hey, Dad, can I borrow the severed head of Medusa tonight? I’m going out with my friends. Okay, honey, just bring it back by midnight, and don’t petrify anyone.” – Rick Riordan

“Most Medusas you see in the classics have flowing robes which would be mad to even try to animate.” – Ray Harryhausen

“Applied Science is a conjuror, whose bottomless hat yields impartially the softest of Angora rabbits and the most petrifying of Medusas.” – Aldous Huxley

“Algol is the name of the winking demon star, Medusa of the skies; fair but deadly to look on, even for one who is already dying.” – Elizabeth Redfern

“My eyes felt like they’d been splashed with acid. I looked for Thalia and instead found myself staring at the bronze face of Medusa.” – Rick Riordan

“A little voice in the back of my head said, Don’t trust him! You’re not special! You’re weird and awkward and a bigheaded Neanderthal freak with Medusa hair! He’s confused you with someone else! Almost immediately, I told that voice to eat shit and die.” – Penny Reid

You can not come to a conclusion unless you know both sides of the story. Story of Medusa and Athena is a mystery which is not solved yet. People give their opinion about the story as per their perception.

We hope you have enjoyed reading these Medusa Quotes and Sayings. Also, If you’ve found us useful, please do consider telling your friends about it. All you have to do is send these quotes on WhatsApp and ask them to subscribe to us.