58 March Quotes For The Spring Lovers 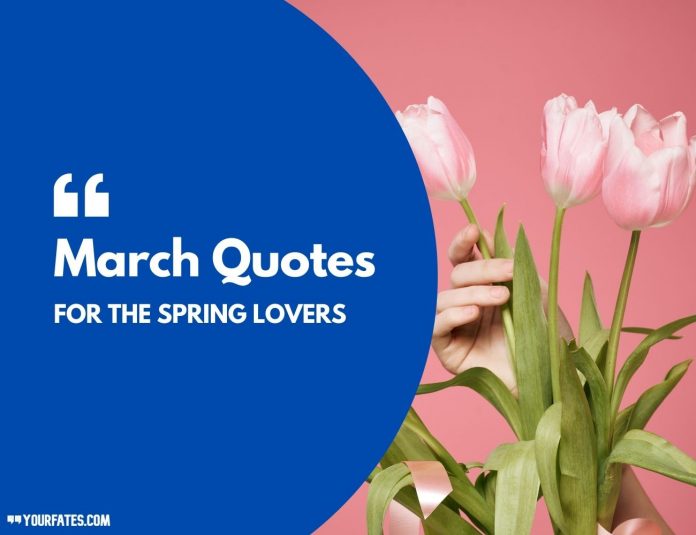 March is the third month of this New Year and are you wondering that what went wrong with your new year’s resolutions and why are you not sticking to them from almost the last one and a half month? Well cheer up, we have still got more than half of the year to stick to the resolutions, or maybe make new easier ones. Anyways, for your monthly dose of motivation and inspiration, we have brought these March Quotes and Sayings so that you can march into March with positivity.

Weather-wise, March can easily be the most favorite month of easily all the people out there. You like harsh sun, here it is, you like cool breeze, here it is, you like new leaves and delicate flowers, here they are. March is the peak of Spring season and it has to be the most pleasant time of the year, the season transitioning from cold winters to warm summers, with flowers blooming all around you.

So here are the best March Quotes and Sayings, if this month matters to you because of any birthdays or anniversaries or special memories, read ahead about what else is amazing about this month:

1. “It was one of those March days when the sun shines hot and the wind blows cold: when it is summer in the light, and winter in the shade.” – Charles Dickens

2. “March, when days are getting long, Let thy growing hours be strong to set right some wintry wrong.” –  Caroline May

3. “In March the soft rains continued, and each storm waited courteously until its predecessor sunk beneath the ground.” – John Steinbeck

4. “The stormy March has come at last, With winds and clouds and changing skies; I hear the rushing of the blast That through the snowy valley flies.” –  William C. Bryant

5. “Winds of March, we welcome you, there is work for you to do. Work and play and blow all day, blow the winter wind away.” – Unknown

6. “A cloud comes over the sunlit arch, a wind comes off a frozen peak, and you’re two months back in the middle of March.” –  Robert Frost

7. “It was March. The days of March creeping gustily on like something that man couldn’t hinder and God wouldn’t hurry.” -Enid Bagnold

8. “March’s birth flower is the daffodil. It’s all too appropriate that cheerful yellow flowers represent the first month of spring.” ­-FTD 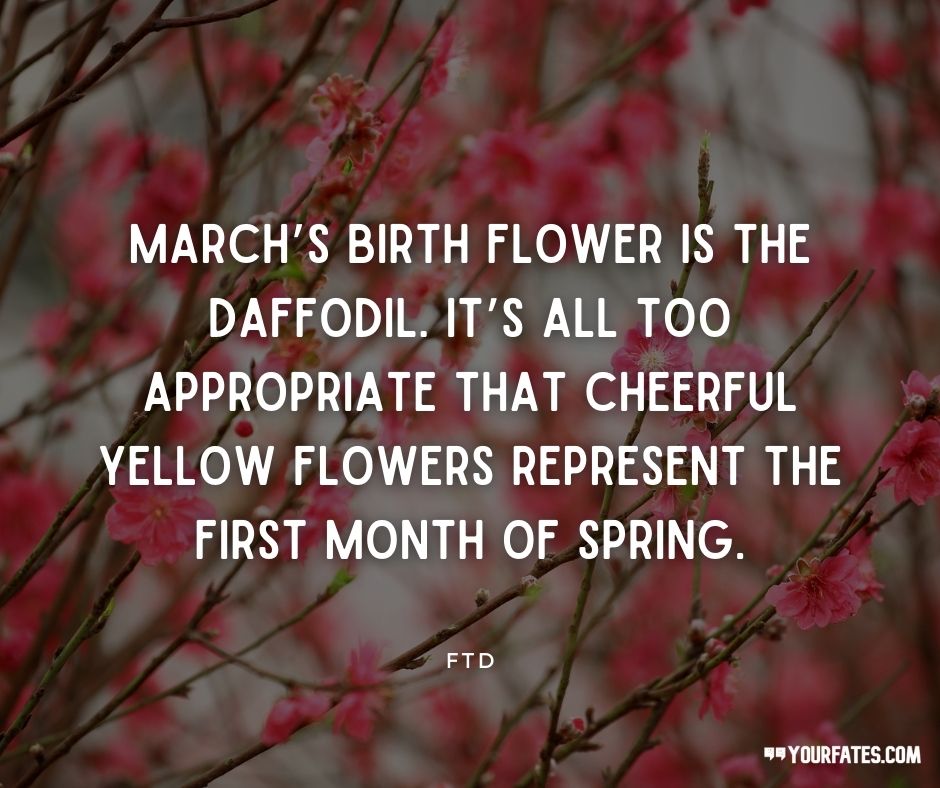 9. “A light exists in Spring, not present in the year at any other period when March is scarcely here.” – Emily Dickinson

10. “Only those with tenacity can march forward in March.” –  Ernest Agyemang Yeboah

11. “In March winter is holding back and spring is pulling forward. Something holds and something pulls inside of us too.” –  Jean Hersey

12. “Smiling, I watch the shaken elm boughs, knowing. It is the wind of March.” -John Greenleaf Whittier 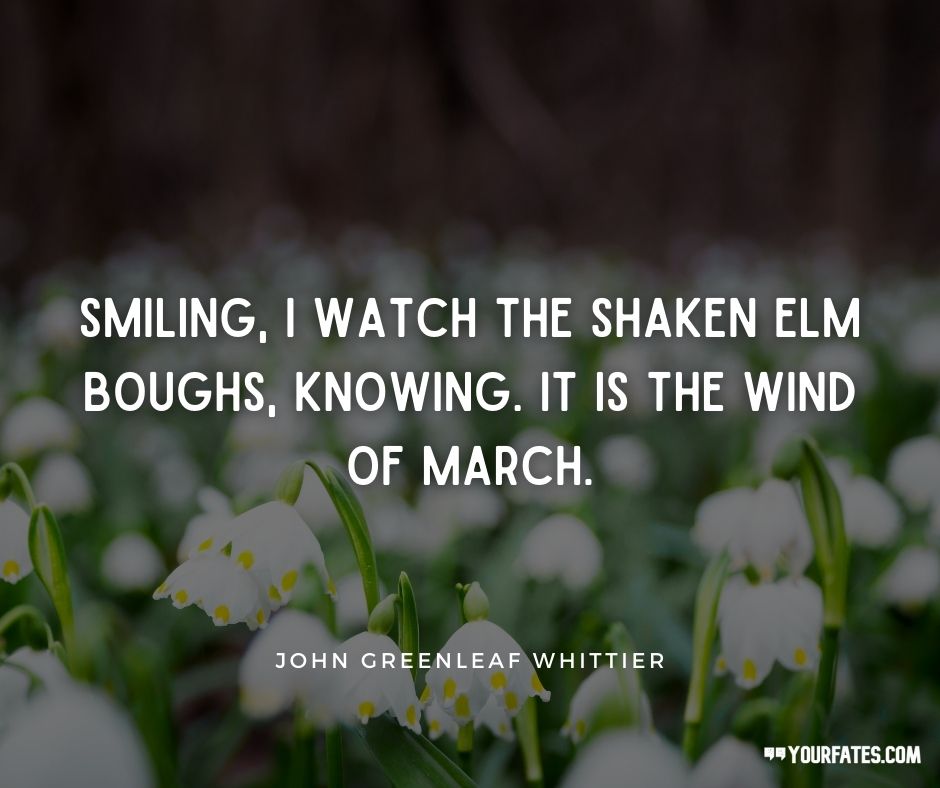 13. “I have said that there was great pleasure in watching the ways in which different plants come through the ground, and February and March are the months in which that can best be seen.” -Henry N. Ellacombe

14. “Flowers and colours everywhere, I am so glad that March is here.” – Anamika Mishra

15. “March is an example of how beautiful new beginnings can be.” – Anamika Mishra

17. “I was devastated by the loss of my job in March, although I can understand why it occurred.” – Steven Hatfill

19. “One swallow does not make a summer, but one skein of geese, cleaving the murk of March thaw, is the spring.” – Aldo Leopold

20. “Don’t ever become a pessimist… a pessimist is correct oftener than an optimist, but an optimist has more fun, and neither can stop the march of events.” – Robert A. Heinlein

21. “March is the month of expectation, the things we do not know, The persons of prognostication are coming now. We try to sham becoming firmness, But pompous joy betrays us, as his first betrothal betrays a boy.” – Emily Dickinson

22. “Springtime is the land awakening. The March winds are the morning yawn.” – Lewis Grizzard

23. “To welcome her the Spring breath’s forth Elysian sweets; March strews the Earth With violets and posies.” –  Edmund Waller

24. “Lo, the flowery month is come! March winds and April showers have done their work, and the earth is all bedecked with beauty.” -Charles H. Spurgeon

25. “It was March. The days of March creeping gustily on like something that man couldn’t hinder and God wouldn’t hurry.” -Enid Bagnold

26. “March, master of winds, bright minstrel and marshal of storms that enkindle the season they smite.” – Algernon C Swinburne 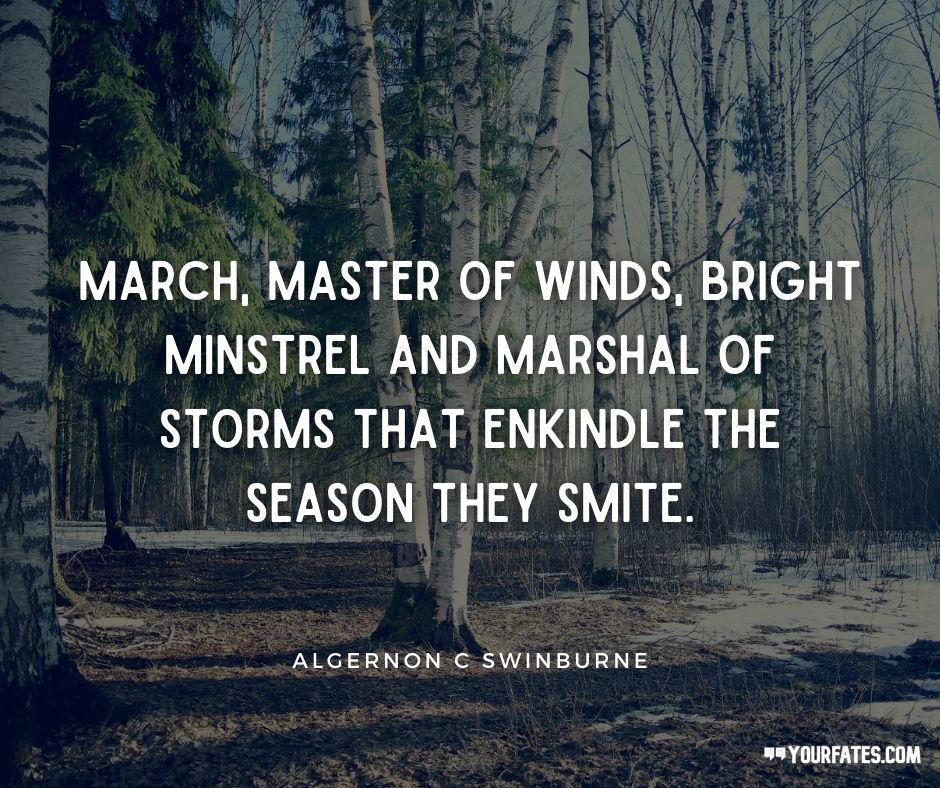 27. “A dry March and a wet May? Fill barns and bays with corn and hay.” -Farmer’s Almanac

29. “The stormy March has come at last, With winds and clouds and changing skies; I hear the rushing of the blast That through the snowy valley flies.” – William Cullen Bryant

30. “February is merely as long as is needed to pass the time until March. ” -J.R. Stockton

31. “March came in that winter like the meekest and mildest of lambs, bringing days that were crisp and golden and tingling, each followed by a frosty pink twilight which gradually lost itself in an elfland of moonshine.” -L.M. Montgomery

33. “They captured in their ramble all the mysteries and magics of a March evening.” – L.M. Montgomery

34. “Spring shows what God can do with a drab and dirty world. – Virgil A. Kraft

35. “Spring work is going on with joyful enthusiasm.” – John Muir 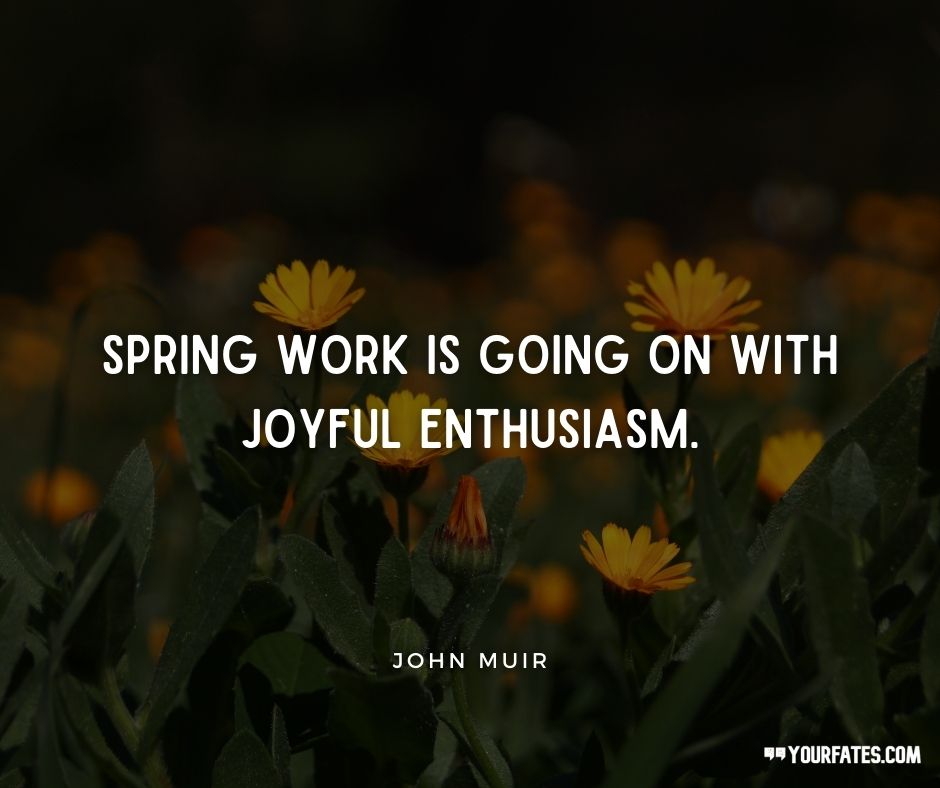 41. “This is the perfume of March: rain, loam, feathers, mint.” -Lisa Kleypas

42. “You can cut all the flowers but you cannot keep Spring from coming.” – Pablo Neruda 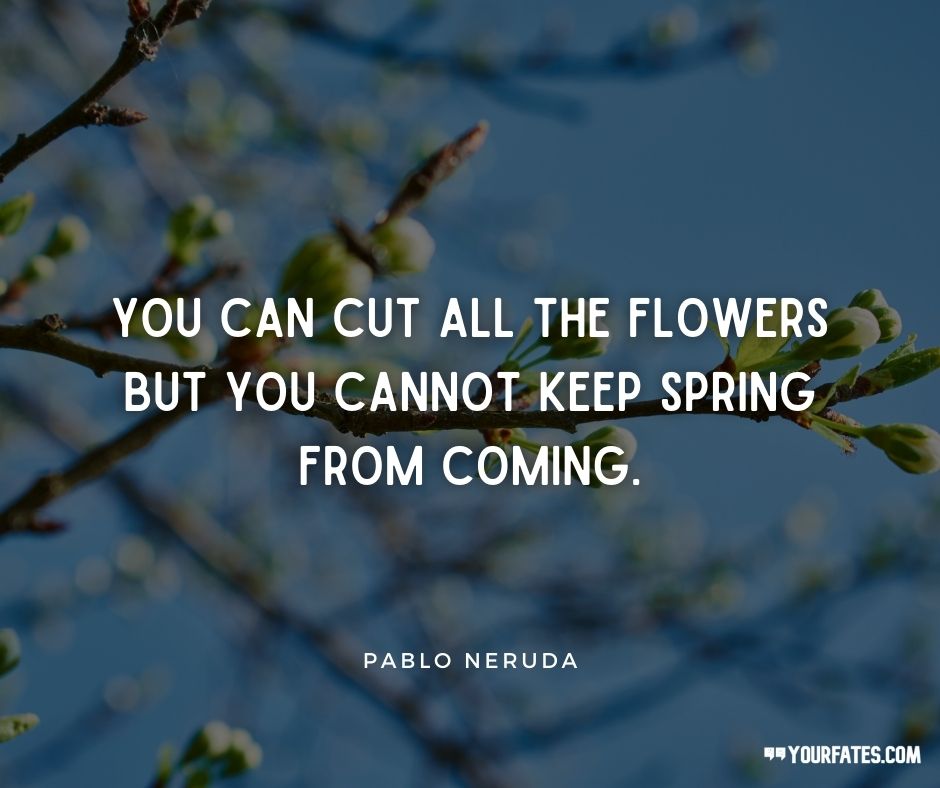 43. “A perfect spring day! Enjoy it while it lasts because you don’t know what’s coming.” – Marty Rubin

44. “You are reborn with the roses, in every spring.” – Juan Ramon Jimenez

48. “March is a tomboy with tousled hair, a mischievous smile, mud on her shoes and a laugh in her voice.” – Hal Borland

49. “March bustles in on windy feet, and sweeps my doorstep and my street.” – Susan Reiner

50. “Indoors or out, no one relaxes in March, that month of wind and taxes, the wind will presently disappear, the taxes last us all the year.” -Ogden Nash

51. “One Christmas my father kept our tree up till March. He hated to see it go. I loved that.” – Mo Rocca

52. “March is the month God created to show people who don’t drink what a hangover is like.” – Garrison Keillor

54. “March is a month without mercy for rabid basketball fans. There are no Rules when the deal goes down in the final weeks of March. Even your good friends will turn into monsters.” -Hunter S. Thompson

55. “My worst job ever, this was when I was a kid, was picking potatoes on the back of a trailer in March. It was freezing, absolutely freezing. . . ” -Ben Miles

56. “Our life is March weather, savage and serene in one hour.” -Ralph Waldo Emerson 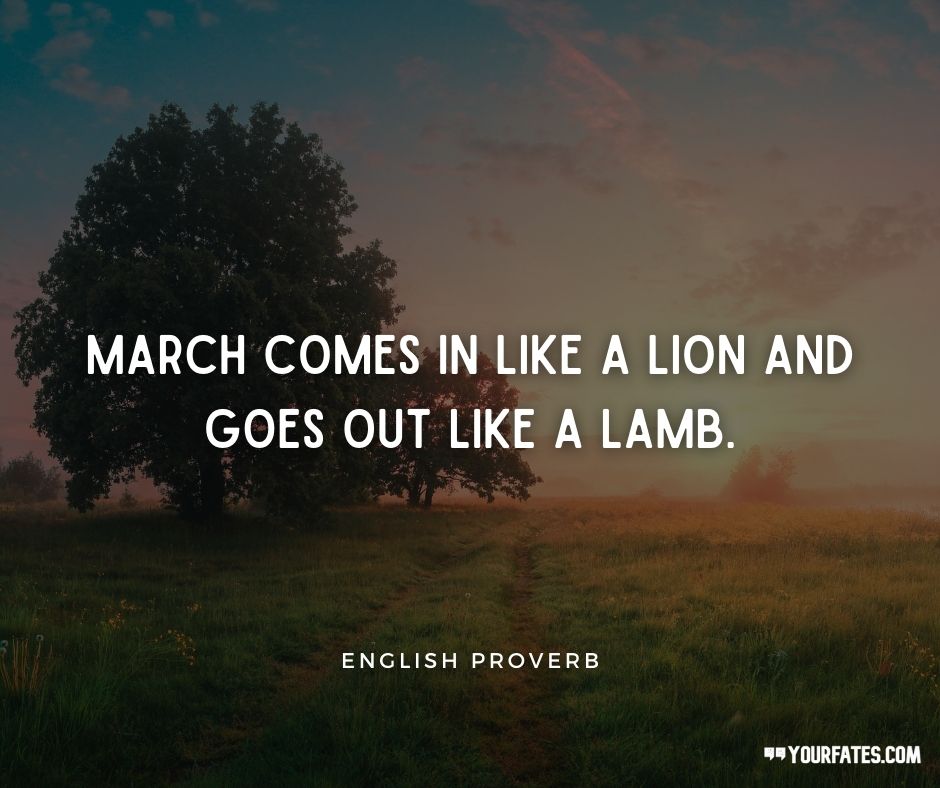 58. “POOR MARCH. It is the HOMELIEST month of the year.” – Vivian Swift

Named after the Roman God of war, Mars, this month actually is peaceful making the days bigger and cozier. Spring is lovable to all people expect for the ones who have devils living inside them and I am sure that even devils love Spring. So enjoy your month and make it productive and happy.

We hope you like these collections of March Quotes. Also, If you’ve found us useful, please do consider telling your friends about it. All you have to do is send these quotes on WhatsApp and ask them to subscribe to us.

Next article
70 April Quotes as Beautiful as Spring Flowers