70 Lighthouse Quotes So You Guide Through Your Shine 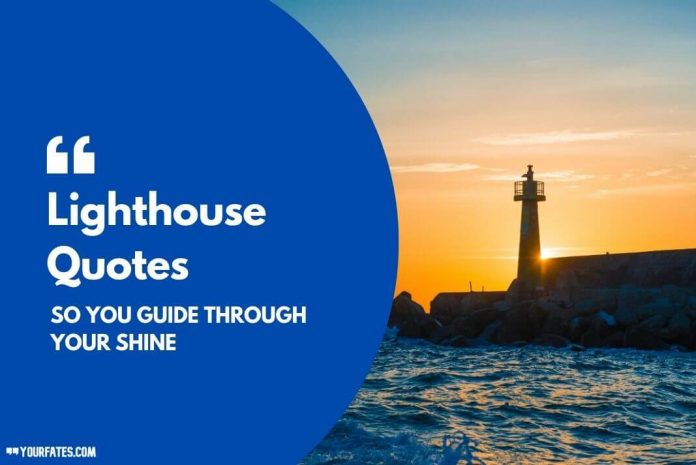 If we think about it, a lighthouse is a much more rare sight than a tiger, windmill, identical twins or a person with an extra thumb but there is so much that we can learn from this lifeless structure. So today we have brought the most beautiful Lighthouse Quotes and Sayings that will inspire you to shine bright like a lighthouse, guiding and inspiring everyone around you through your deeds and will.

We might not have seen a lighthouse, but thanks to some movies and cartoons and anime shows, whenever we hear its name, an aesthetically pleasing picture hits our mind, a tall tower, standing on rocks beside the ocean, surrounded by lush greenery and towered by blue and beautiful ocean-sky, guiding ships and people and even marine life. And other times, the image is of an abandoned tower, standing tall with gray hues and with even grayish surroundings, giving chills, mostly haunted but still standing tall and holding its ground, amidst all the negativity.

So be like a lighthouse, strong, guiding and standing there like a mountain. And to help you learn something from this lifeless structure that has more personality then many, we have brought these Lighthouse Quotes and Sayings that will inspire and motivate you, so take a look:

1. “Some people in our life are like a lighthouse. They guide us to safety as we navigate the coast.” – Mohammed Sekouty

3. “You were my lighthouse when I was lost at sea without you, I would never have found me.” – Gemma Troy

4. “He’s the One I always run to…The lighthouse that I turn to.” – Mario William Vitale

5. “Don’t forget that maybe you are the lighthouse in someone’s storm.” – Unknown

6. “I feel that we’re all lighthouses, and my job is to shine my light as brightly as I can to the darkness.” – Jim Carrey 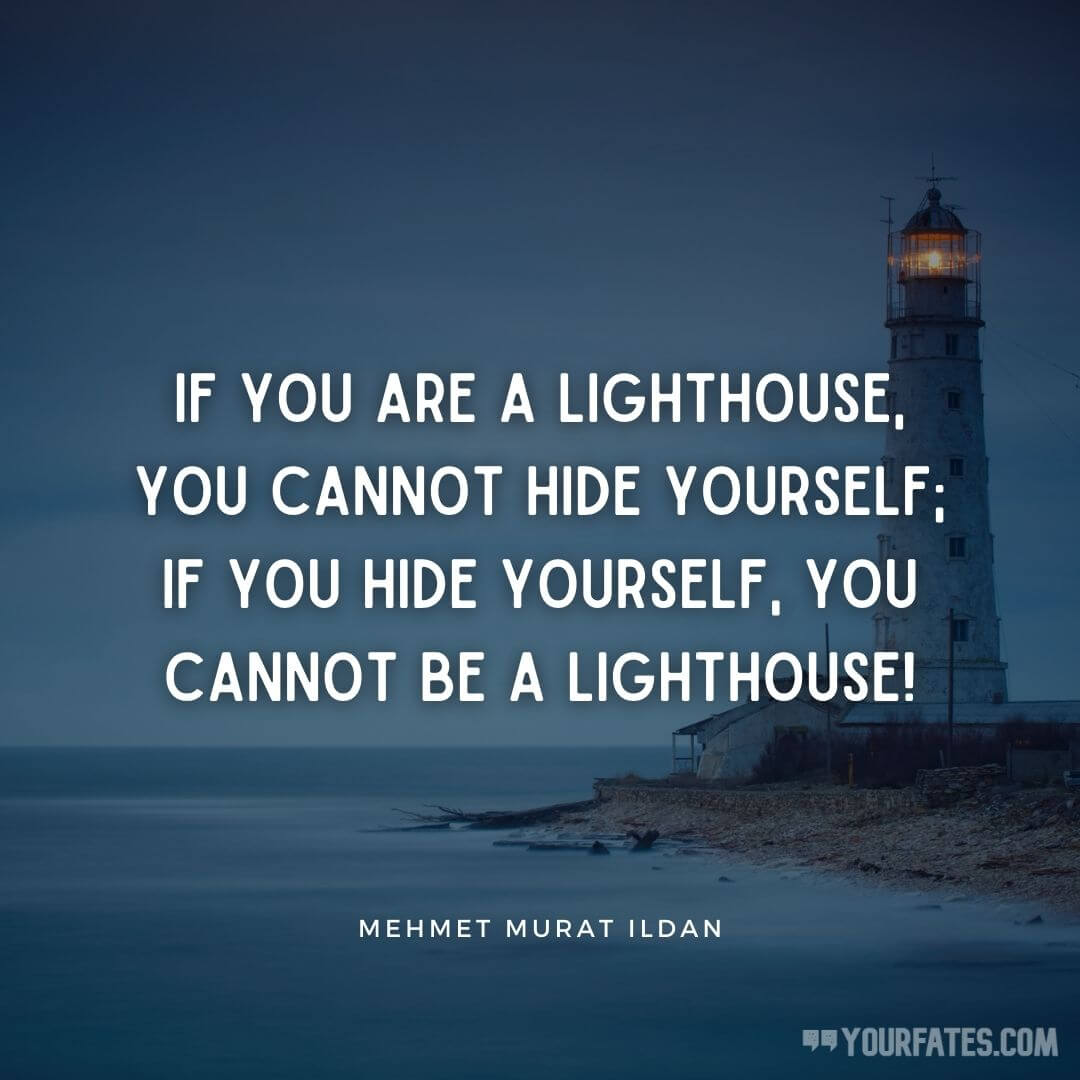 8. “Look to the lighthouse of the Lord. There is no fog so dense, no night so dark, no gale so strong, no mariner so lost but what its beacon light can rescue.”

9. “Like a simple little lighthouse, my true ideal is to just be… having no trace of seeking, desiring, imitating, or striving, only light and peace.” – Bodhi Smith

10. “A True Friend who leaves heartfelt messages, can be a lighthouse to others, sharing light and truth, which comes from their heart.” – Tom Baker

11. “I am lighthouse rather than lifeboat. I do not rescue, but instead help others to find their own way to shore, guiding them by my example.” – Unknown

12. “Some people are destined to be a lighthouse for a lost comrade.” – Erin Forbes

13. “Friends are like lighthouses, with the sources of light coming from their hearts.” – Tom Baker

14. “The scars you share become lighthouses for other people who are headed to the same rocks you hit.” – Unknown

15. “Lighthouses are endlessly suggestive signifiers of both human isolation and our ultimate connectedness to each other.” – Virginia Woolf

16. “The trouble with drowning in the mess of your own life is that you’re not in any shape to save anyone else. You can’t be a lighthouse when you’re underwater yourself.” – Unknown

17. “Lighthouses are endlessly suggestive signifies of both human isolation and our ultimate connectedness to each other.”

18. “If you can’t survive in this world, you had better make a world of your own.” – Jeanette Winterson

19. “By spreading knowledge you can live forever. You can be the lighthouse that guides people to safety; a light in the darkest of times.” – Zachariah Renfro

20. “Stop turning every other battle into yours. Sometimes amidst of all the wars, all you need to become is the lighthouse, not the sword.” – Akshay Vasu

21. “The lighthouse of the Lord beckons to all as we sail the seas of life.” – Thomas S Monson

22. “Be the lighthouse that bears the torment of the storm, but never forget to show the saving lights of life.” – Debasish Mridha

23. “Inside my empty bottle I was constructing a lighthouse while all others were making ships.” – Charles Simic

24. “A lighthouse is kind of like an angel. Most of the people the light helps take it for granted. Until it’s not there.” – Jeffrey Perren

25. “The Lighthouse was then a silvery, misty-looking tower with a yellow eye, that opened suddenly, and softly in the evening.”

26. “Lighthouses don’t go running all over an island looking for boats to save; they just stand there shining.” – Anne Lamott

27. “I can think of no other edifice constructed by man as altruistic as a lighthouse. They were built only to serve.”

28. “An awake heart is like a lighthouse helping others to find a safe way home.” ― Rolf van der Wind

29. “The lighthouse does great service to humanity, yet it is the slave of those who trim the lamps. – Alice Wellington Rollins

30. “He slept that night thinking of loves and lighthouses. That one love might shine to bring all loves home.” – Jamie O’Neill

31. “Let these eyes be a lighthouse. Let these arms be a safe harbor. Let this heart be a long-awaited shore.” – Tiffany Aurora

32. “Some people in our life are like a lighthouse. They guide us to safety as we navigate the coast.” – Mohammed Sekouty

33. “Every Lighthouse knows that when the giant waves come, no one will help! And when you know that no one will help you, you fight more seriously!” – Mehmet Murat Ildan

34. “Man must behave like a lighthouse; he must shine day and night for the goodness of everyman.” – Mehmet Murat Ildan

35. “To be a lighthouse, you must be strong enough to resist every kind of storm, to every kind of loneliness and you must have a powerful light inside you!” – Mehmet Murat Ildan

36. “Lighthouses don’t get all wobbly when the weather gets rough; they just stand there shining.” – Unknown

37. “Like a simple little lighthouse, my true ideal is to just be…having no trace of seeking, desiring, imitating, or striving, only light and peace.” – Bodhi Smith

38. “A lighthouse is not interested in who gets its light! It just gives it without thinking! Giving light is its nature!” – Mehmet Murat Ildan

39. “God built lighthouses to see people through storms. Then he built storms to remind people to find lighthouses.” – Shannon Alder

40. “Anything’ for a quiet life, as the man said when he took the situation at the Lighthouse.” – Charles Dickens

41. “Lighthouses are not just stone, brick, metal, and glass. There’s a human story at every lighthouse; that’s the story I want to tell.” ― Elinor DeWire

42. “A lighthouse doesn’t save the ships; it doesn’t go out and rescue them, it’s just this pillar that helps to guide people home.” – Lea Michele

43. “We are told to let our light shine, and if it does, we won’t need to tell anybody it does. Lighthouses don’t fire cannons to call attention to their shining – they just shine.” – Dwight L. Moody

44. “Don’t ever let anyone put out your light because they are blinded by it.” ― Shannon L. Alder

46. “Love is like a lighthouse, a beacon in the dark. When you lose the path that lights your way, you feel that you have died, but I assure you, you have not.”

47. “You were my lighthouse when I was lost at sea without you, I would never have found me.” -Gemma Troy

48. “She is like a revolving lighthouse; pitch darkness alternating with a dazzling brilliance!” – Henry James

50. “The lighthouse stands unintentionally stoic and tall and lights the way for those out at sea.”

51. “If you close your eyes, no lighthouse can help you!” ― Mehmet Murat Ildan

52. “Anything for the quick life, as the man said when he took the situation at the lighthouse.” – Charles Dickens

53. “Books are lighthouses erected in the great sea of time.” – E.P. Whipple

54. “Some people are destined to be a lighthouse for a lost comrade.” – Erin Forbes

55. “You think you’re so high and mighty just because you’re a damned lighthouse keeper?” – ‘The Lighthouse’

59. “Skepticism is a barren coast, without a harbor or lighthouse.” – Henry Ward Beecher

60. “Metaphysics is a dark ocean without shores or lighthouse, strewn with many a philosophic wreck.” – Immanuel Kant

63. “Darkness reigns at the foot of the lighthouse.” – Japanese Proverb

64. “The lighthouse that stands unintentionally stoic and tall and lights the way for those out at sea”. – Buffy Sammons

65. “Once the lighthouse is seen, the rest of the sea is ignored.” – Terri Guillemets

66. “Be a lighthouse. Shine for others when they are in darkness.” – Unknown

69. “Seek not a lighthouse greater than the human mind!” – Mehmet Murat Ildan

70. “A fallen lighthouse is more dangerous than a reef.” – Navjot Singh Sidhu

Most of us do not live near a shore, most of us do not have the view of a lighthouse from our window and most of us might not have even looked at a lighthouse in real life. But it still makes us feel something unusual, maybe because of the eerie silence amidst the loud shore or the lively and cheerful aura. Anyways, it is a guide and it fulfills its destiny beautifully.

We hope you like these collections of Lighthouse Quotes. Also, If you’ve found us useful, please do consider telling your friends about it. All you have to do is send these quotes on WhatsApp and ask them to subscribe to us.