If you admire the art of Kevin Gates, you have a wonderful taste in music. Along with having incredible art of music, Gates has great thoughts towards life. Let’s have a look at some of his wonderful Kelvin Quotes and Sayings.

But before that let us know his journey in brief to understand his quotes better.

Kevin Jerome Gilyard, famously known as Kevin Gates is an American rapper, singer and entrepreneur. He started his career in music at a very young age. The release of his song ‘Islah’ in 2016 became the beginning of his journey of being successful. And after that he kept on stunning.

Superhit songs and albums one after another shaped his music career. Kevin Gates never failed to impress anyone through his thoughts. His beliefs revolve around being humble, disciplined, and honest.

He has seen many ups and downs in life- from losing his father in childhood to getting into jail in the middle of his rising music career. But he never chooses to give up.

All the experiences of his life get absorbed into his personality and come out in the form of his sayings and philosophies.

So, this is for the one who has always won our hearts through his music. We have brought this amazing collection of Kevin Gates Quotes and Sayings. Read on to get inspired by them:

2. “When you come up in the slums, having nothin’ make you humble” – Kevin Gates

3. “Being logical gave me a reason to doubt.” – Kevin Gates

5. “The only frustrating thing about jail is that I can’t make music.” – Kevin Gates

6. “I never go into a situation with any type of expectations.” – Kevin Gates

7. “Don’t let nobody know that you a monster. Keep it on the tuck and then surprise ’em.” – Kevin Gates

9. “I believe that life is a journey and for me to tell you my plans; things never go according to plan.” – Kevin Gates

10. “I have trust issues with allowing other individuals to know my innermost secrets for fear of how I may be viewed. Everyone has this.” – Kevin Gates

11. “I’m an introvert somewhat. There could be a room full of people, I’ll go stand in the corner.” – Kevin Gates

17. “When you stand for something, you’ve got to stand for it all the way, not halfway.” – Kevin Gates

18. “I adapt and I adjust to whatever environment I’m in.” – Kevin Gates

20. “True wealth is not of the pocket, but of the heart and of the mind.” – Kevin Gates

21. “Anything lost, can be found again, except for time wasted.” – Kevin Gates

22. “The ones that hate you most tend to be the people you know.” – Kevin Gates

23. “I don’t really like talking. I like to execute. I’m not a talking person. I’m an action person.” – Kevin Gates

24. “I put my flaws on front street. So the world accepted my flaws, so I don’t have any flaws.” – Kevin Gates

25. “When you’re in prison, you want to know that you were thought about.” – Kevin Gates

26. “If it matters to you, pursue it aggressively.” – Kevin Gates

27. “I have respect for every man that demand your respect.” – Kevin Gates

28. “All things are obtained by Wisdom and Knowledge.” – Kevin Gates 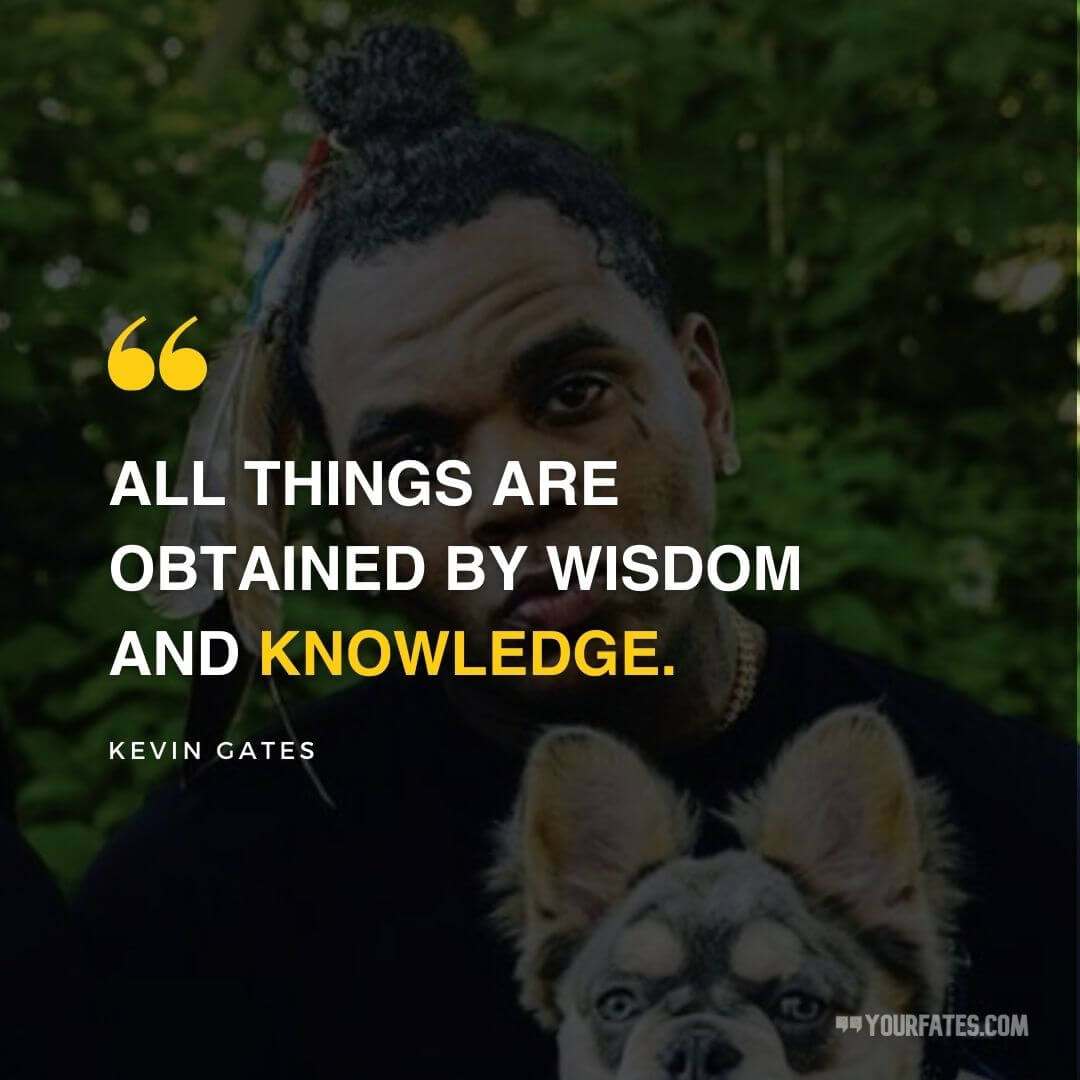 29. “Prison was the best thing that ever happened to me.” – Kevin Gates

31. “Having love for your enemy is a hard thing to do, real talk.” – Kevin Gates

32. “Knowledge is provided but only to those who need to know.” – Kevin Gates

33. “Without an understanding of bad…how can one truly have an appreciation of good.” – Kevin Gates

34. “Inspiration comes from many things, and in the life of KG his music is just one of them.” – Kevin Gates

36. “I love God, I love everybody else around me as myself, and I love my enemy.” – Kevin Gates

40. “Fall in love fast, make sure I handle it delicate” – Kevin Gates

41. “You have to be intimate with a person to know that person.” – Kevin Gates

42. “Loves a battlefield it’s not a one night stand.” – Kevin Gates

43. “Some may consider this a problem, I easily fall in love.” – Kevin Gates

45. “To be honest I am not looking to be romantic, already got someone at home.” – Kevin Gates

46. “Marriage is the most wonderful thing ever.” – Kevin Gates

48. “You can’t make everybody else happy and still stay on top.” – Kevin Gates

49. “Why accept failure when success is free?” – Kevin Gates

50. “If you go back on your word…I won’t say anything but in my mind you punk for life.” – Kevin Gates

52. “Life is about conduct and how we conduct ourselves. But two wrongs never make a right.” – Kevin Gates

53. “Life is about conduct and how we conduct ourselves. But two wrongs never make a right.” – Kevin Gates

54. “Every time the leaves are changing it’s the loneliest time of the year.” – Kevin Gates

56. “If you associate yourself with peer pressure or complacency, you’re destined for failure.” – Kevin Gates

57. “I’m inspired by everything that goes on around me. I’m a sponge. I’m very analytical. I notice the things that most people don’t notice.” – Kevin Gates

58. “Out my window… I see everything I dream about and wished I had”– Kevin Gates

59. “I’ve had mixtapes that have been better than albums I’ve heard from other artists. I take my time; I put my heart into it.” – Kevin Gates

65. “I know I write a lot of my best music in the car, like late night. Three, four in the morning.” – Kevin Gates

66. “Music’s the most therapeutic thing for me. Because I suffer with depression, and it’s my only form of releasing it.” – Kevin Gates

68. “I suffer from deep depression, so my only release is music.” – Kevin Gates

69. “I don’t pay attention to sales because it’s not about that for me. It’s about the music. Music is all I have.” – Kevin Gates

70. “I love to make music, I love to get tattoos…That’s just what I love. If I wasn’t getting paid I’d still do it.”– Kevin Gates

71. “I could care less about the particular. I like to make music.” – Kevin Gates

73. “A hot producer might not make a hot beat for me. I just love music.” – Kevin Gates

74. “Having a musical outlet is a pure blessing to the ears of thousands of fans.” – Kevin Gates

76. “The struggle is real, but it doesn’t last forever.” – Kevin Gates

77. “Some’ll say life is a gamble, which means love is a casino. Everybody just playin’ to win.” – Kevin Gates

78. “Sometimes you have to let people bump their heads to realize that they are not making sense. Don’t try to figure them out or it will drive you crazy.” – Kevin Gates

80. “Everybody around you pretending that they are your partner, let you have a problem they won’t even help you out.” – Kevin Gates

81. “Watch people daily and you will see their true colors.” – Kevin Gates

84. “Use the things that make you angry — as fuel to make you better.” – Kevin Gates

85. “Jail and the streets go hand in hand. You can’t have one without the other. They coincide.” – Kevin Gates

89. “Entertainment and the streets don’t go together.” – Kevin Gates

90. “My daily conversation, it consists of hustle. Grinding from the bottom sick and tired of struggle.” – Kevin Gates

Kevin Gates is a reflection of wisdom and hardwork. Being humble has been his greatest principle. His sayings and quotes holds beautiful knowledge of life that we can give our life a beautiful spark.

Have a great day ahead!

We hope you get to learn a lot about love, life, and success by reading Kevin Gates Quotes and Sayings and get a different perspective to look at things. Also, If you’ve found us useful, please do consider telling your friends about it. All you have to do is send these quotes on WhatsApp and ask them to subscribe to us.