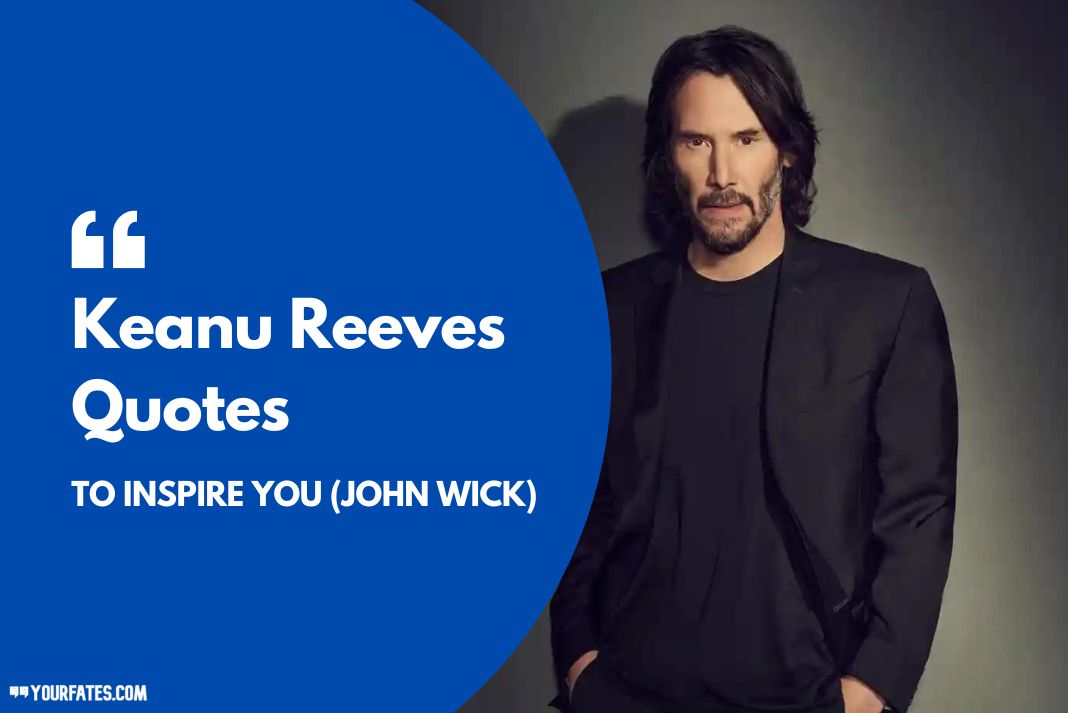 “I don’t want to be part of a world where being kind is a weakness.” – Keanu Reeves

Whether Neo in Matrix or John Wick or Theodore in Bill and Ted’s Excellent Adventure or any other role, you can’t resist admiring the acting of Keanu Reeves. Apart from delivering dialogues in movies, he is also appreciated for his amazing delivery of thoughts. How about looking into the famous quotes by Keanu Reeves? Presenting you famous Keanu Reeves Quotes and Sayings:

Keanu Reeves is an actor and musician. He was originally from Lebanon but moved to New York with his mother and sister after the dissolution of his parent’s marriage. He left his schooling in between to pursue the career of acting. After doing some roles in TV shows and supporting roles in movies in Toronto, Reeves moved to Hollywood. His first popular role was of ‘Theodore’ in Bill and Ted’s Excellent Adventure and then the release of the movie Speed made him a star. After that he went on appearing in small and big films. His looks and talent made him a box-office star. Keanu has gone through a great tragedy.

He had a stillborn daughter and after that his girlfriend died in an accident. He had also lost his Best Friend- River who was like a brother to him. After being single for a long time, he is now dating Los Angeles star, Alexandra Grant. Keanu Reeves is known for his generosity and kindness. He uses his million-dollar wealth to serve others. He is liked by his fans and co-actors because of his positivity. Keanu uses his power and position in a nicest way and is always humble.

So, here’s the one for the nicest guy in Bollywood. Enjoy famous Keanu Reeves Quotes and Sayings:

Don’t forget to also read out the handpicked collection of Rumi Quotes to change your outlook towards life.

“Sometimes simple things are the most difficult things to achieve.” – Keanu Reeves

“I don’t understand why people get mad when they get rejected by somebody or something. They have done you a favor by not wasting your time and playing with you.” – Keanu Reeves

“I think that a picture can tell a thousand words, and none of them can be right. Or true.” – Keanu Reeves

“I am not handsome or sexy. Of course, it’s not like I am hopeless.” – Keanu Reeves

“Grief and loss, those are things that don’t ever go away. They stay with you.” – Keanu Reeves

“Tattoos are interesting, but at the same time they are also a mask – you are exhibiting your past life on your body.” – Keanu Reeves

“Multi-culture is the real culture of the world – the pure race doesn’t exist.” – Keanu Reeves

“It’s the journey of self, I guess. You start with this kind of loner, outside guy, which a lot of people can relate to, and he goes out into the world.” – Keanu Reeves

“It’s easy to stay grounded. The ground is very close. And we walk on it every day.” – Keanu Reeves 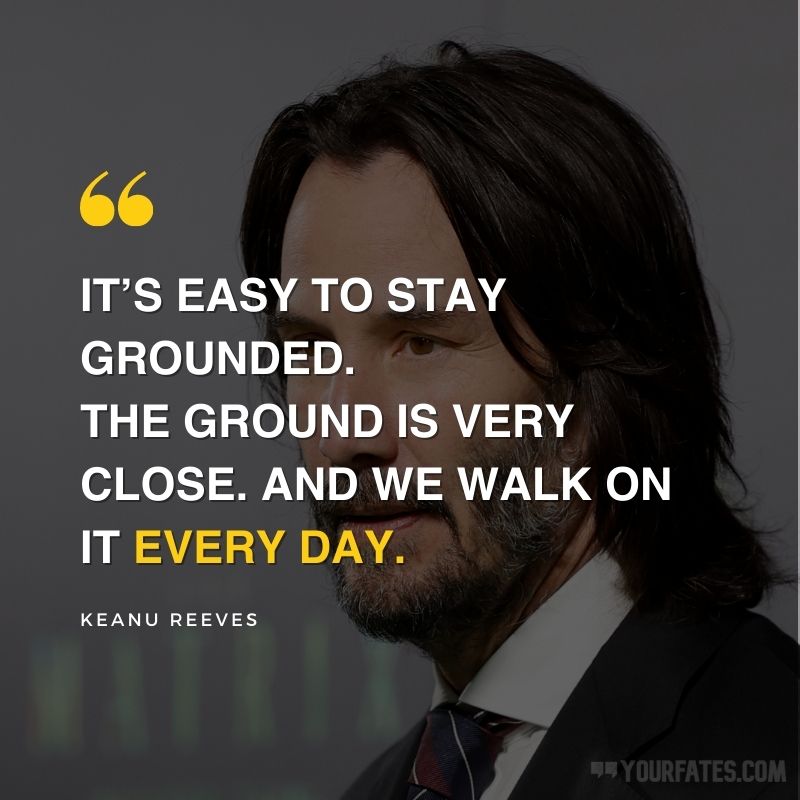 “People keep asking if I’m back and I haven’t really had an answer. But now, yeah, I’m thinking I’m back!” – Keanu Reeves

“I dream of a day where I walk down the street & hear people talk about morality, sustainability & philosophy instead of the Kardashians.” – Keanu Reeves

“It is incredibly empowering to know that your future is in your hands.” – Keanu Reeves

“Multi-culture is the real culture of the world – a pure race doesn’t exist.” – Keanu Reeves

“Nothing ever truly dies. The universe wastes nothing, everything is simply transformed.” – Keanu Reeves

“I was raised to treat people exactly how I would like to be treated by others. It’s called respect.” – Keanu Reeves

“The simple act of paying attention can take you a long way.” – Keanu Reeves

If you’re enjoying these quotes, you’ll love our collection of Naruto Quotes that will never let you lose hope.

“Honestly, I try not to do anything I don’t want to do.” – Keanu Reeves

“I’m at the stage in my life where I keep myself out of arguments. Even if you tell me 1+1=5. You’re absolutely correct, enjoy.” – Keanu Reeves

“Life is good when you have a good sandwich.” – Keanu Reeves

“Fame is drag. The paparazzi culture is more pervasive than it used to be. On the positive side, it’s nice not to have to worry about bills.” – Keanu Reeves

“Luxury is the opportunity to experience quality, be it a place, a person or an object.” – Keanu Reeves

“You ever have that feeling where you’re not sure if you’re awake or still dreaming?” – Keanu Reeves

“Artists are losing the choice to use film. People have a love for it – the grain, how it feels, the texture.” – Keanu Reeves

“I do think there must be some kind of interaction between your living life and the life that goes on from here.” – Keanu Reeves

“Sometimes we get so caught up in our daily lives that we forget to take the time out to enjoy the beauty in life.” – Keanu Reeves

“When I don’t feel free and can’t do what I want, I just react. I go against it.” – Keanu Reeves 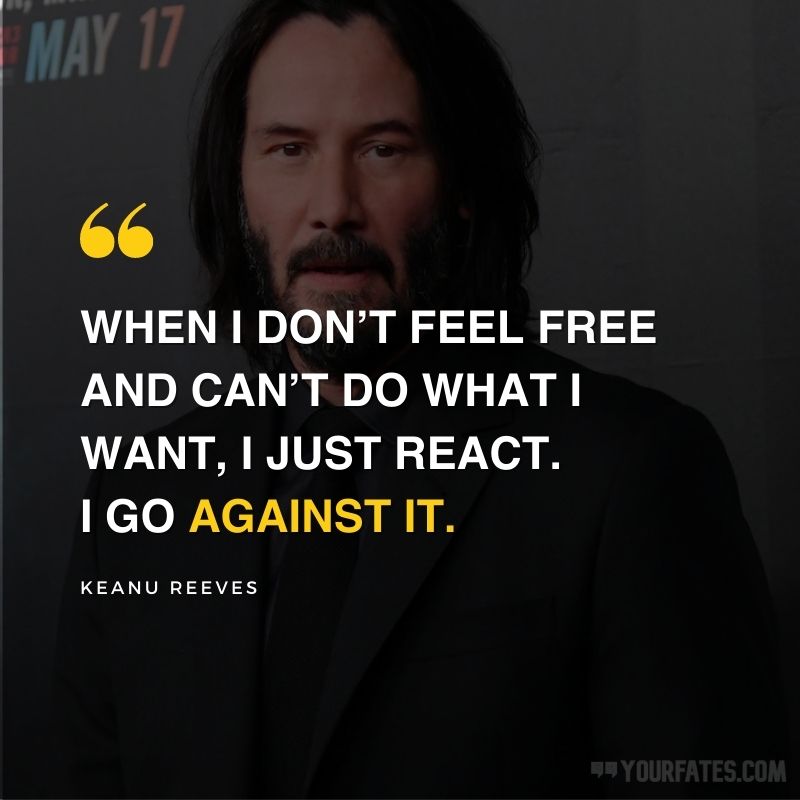 “Money doesn’t mean anything to me. I’ve made a lot of money, but I want to enjoy life and not stress myself building my bank account. I give lots away and live simply, mostly out of a suitcase in hotels. We all know that good health is much more important.” – Keanu Reeves

“The acting experience and the collaborating and creating the world, working on the piece, they’re the same joys.” – Keanu Reeves

If you’re enjoying this article, be sure to also check out these Johnny Depp Quotes to learn from this honest gentleman.

“It’s always wonderful to get to know women, with the mystery, the joy and the depth. If you can make a woman laugh, you’re seeing the most beautiful thing on God’s Earth.” – Keanu Reeves

“I will always be in love with love.” – Keanu Reeves 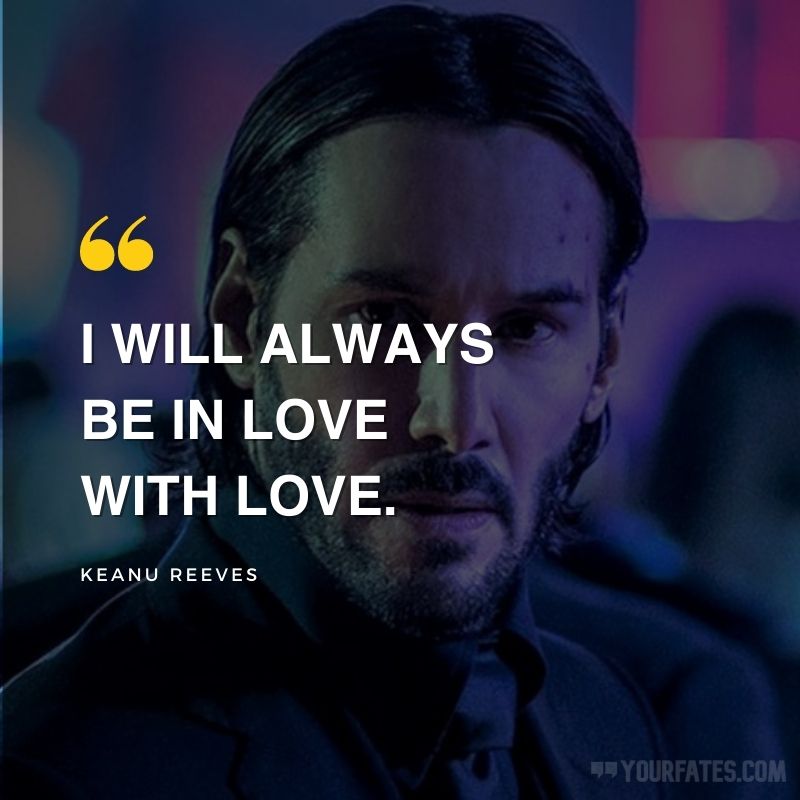 “The impact of falling in love for the first time has a special place in our architecture.” – Keanu Reeves

“When the people you love are gone, you’re alone.” – Keanu Reeves

“So many people have that relationship. The companionship. The connection. To our – to other beings, our pets. I hate to call them pets. But you know, to other creatures that we share our lives with.” – Keanu Reeves

“I believe in love at first sight. You want that connection, and then you want some problems.” – Keanu Reeves

“If you have been brutally broken but still have the courage to be gentle to other living beings, then you’re a badass with a heart of an angel.” – Keanu Reeves

“Falling in love and having a relationship are two different things.” – Keanu Reeves 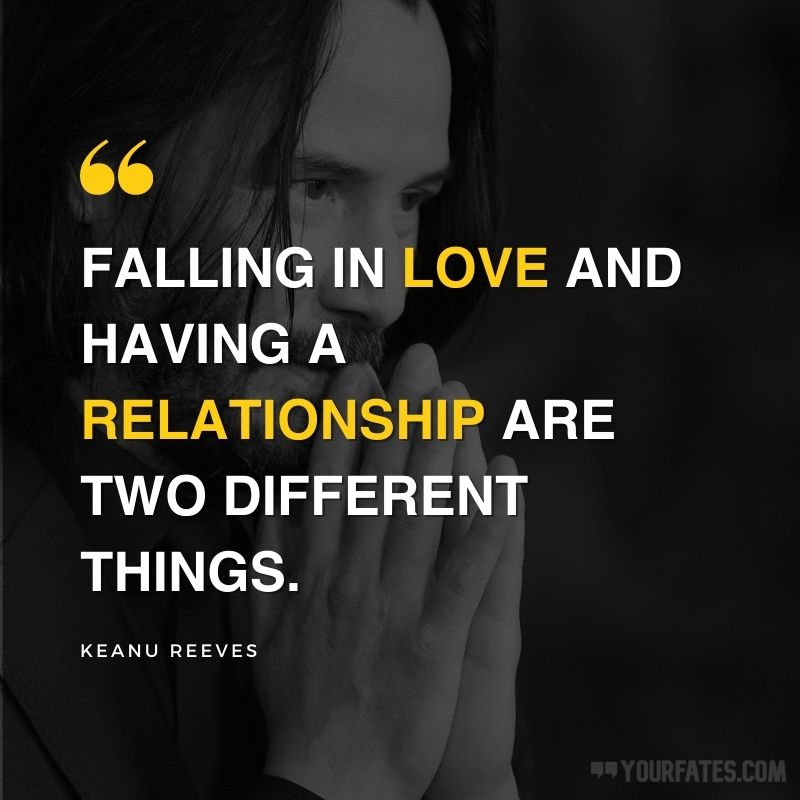 “When the people you love are gone, you’re alone.” – Keanu Reeves

“I know that the ones who love us will miss us.” – Keanu Reeves

“Letters are something from you. It’s a different kind of intention than writing an e-mail.” – Keanu Reeves

“A good date is when you are intoxicated with each other’s company and everything becomes good in the world.” – Keanu Reeves

“I guess living without love, without experiencing it or being able to give it is pretty strong punishment.” – Keanu Reeves

“Kissing someone is pretty intimate, actually very intimate, and your heart always kind of skips a beat before you do that.” – Keanu Reeves

“Art is about trying to find the good in people and making the world a more compassionate place.” – Keanu Reeves

Also, check out these insightful Brad Pitt Quotes that will win your heart.

“You have to change your life if you’re not happy and wake up if things aren’t going the way you want.” – Keanu Reeves

“The person who was holding me back from my happiness was me.” – Keanu Reeves 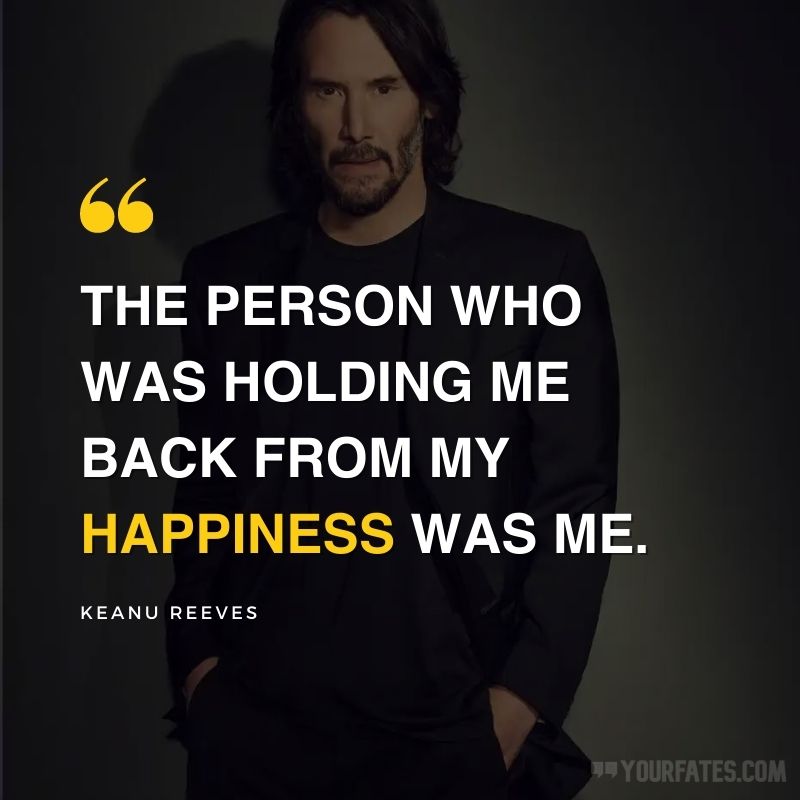 “So, in the end, I think we can all pretty well agree that even in the face of tragedy, a stellar person can thrive. No matter what’s going on in your life, you can overcome it! Life is worth living.” – Keanu Reeves

“I cried over beauty, I cried over pain, and the other time I cried because I felt nothing. I can’t help it. I’m just a cliché of myself.” – Keanu Reeves

“Every struggle in your life has shaped you into the person you are today. Be thankful for the hard times, they can only make you stronger.” – Keanu Reeves 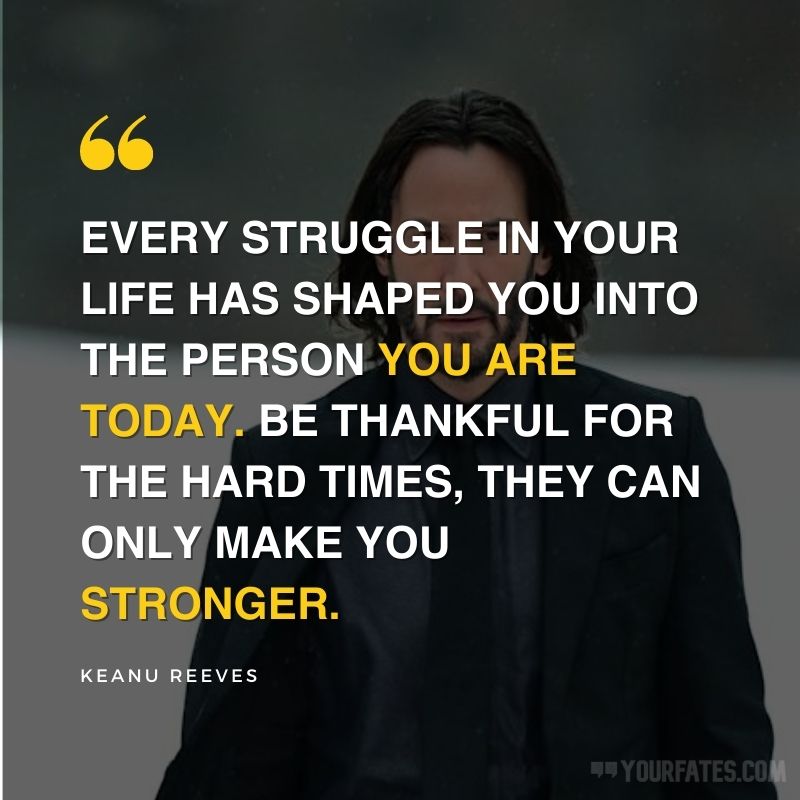 “In my quiet, I was working something out.” – Keanu Reeves

“Even in the face of tragedy, a stellar person can thrive. No matter what’s going on in your life, you can overcome it! Life is worth living.” – Keanu Reeves

Hiding his pain from the world and living with a smile, Reeves is an inspiration for all of us to never let tragedies break us. Instead, we should handle them well to make us strong. We hope you have enjoyed these famous Keanu Reeves Quotes and Sayings and get inspired to be generous and kind.

We hope you like these collections of Keanu Reeves Quotes. Also, If you’ve found us useful, please do consider telling your friends about it. All you have to do is send these quotes on WhatsApp and ask them to subscribe to us.