75 Kanye West Quotes To Motivate You 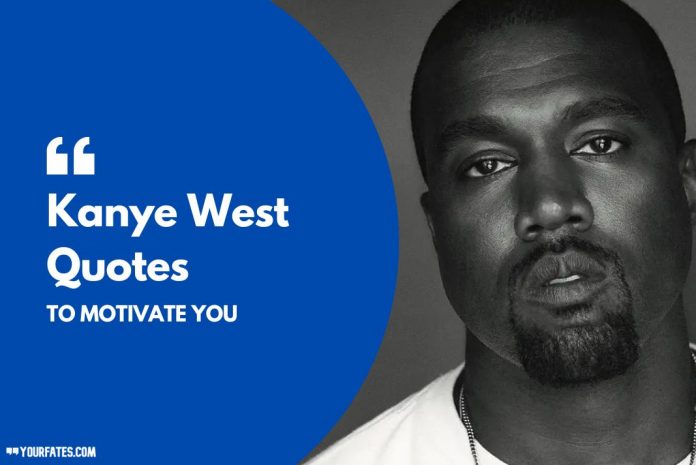 “I refuse to follow the rules where society tries to control people with low self-esteem.” – Kanye West

Have you ever wondered what hip-hop music would be like without Kanye West? He has a great contribution in hip-hop music. Well! If you are done with his songs, how about looking into the famous quotes by this amazing rapper and producer? Presenting you famous Kanye West Quotes and Sayings.

Kanye West is an American rapper and producer. His father was a photographer and his mother was a college professor. He went to Chicago State University for one year but then dropped out to pursue his career in music. After a few albums like Life and Blueprint, he made his name as a successful producer. In 2004, he released his debut solo album ‘The College Dropout‘ which was massively successful. He won a Grammy Award in 2005 for Jesus Walks. Also, he won awards for best rap album and best rhythm in the same year.

His second album ‘Late Registration’ was another success and had many hit singles after that. He won another three Grammy Awards. In 2009 during MTV Video Music Awards, West interrupted Taylor Swift by saying that Beyonce deserved the award as she had one of the best videos of all time.

The incident went viral which brought him in trouble. Kanye soon apologized to Taylor. He came up with the song My Beautiful Dark Twisted Fantasy the following year. Bound 2 was his most successful single, featuring him and his girlfriend. Eventually, they got married in 2014 and divorced in 2021.

Kanye also announced his presidency elections on Twitter in 2020 but he got only a few votes which made no difference. Kanye West changed his name to ‘Ye’ which means You as it is the most used word in the Bible. West also owns a footwear brand ‘Yeezy’ partnering with Adidas.

So, here’s one of the most influential hip-hop musicians of all time. Enjoy Kanye West Quotes and Sayings

“I’ll say things that are serious and put them in a joke form so people can enjoy them. We laugh to keep from crying.” – Kanye West 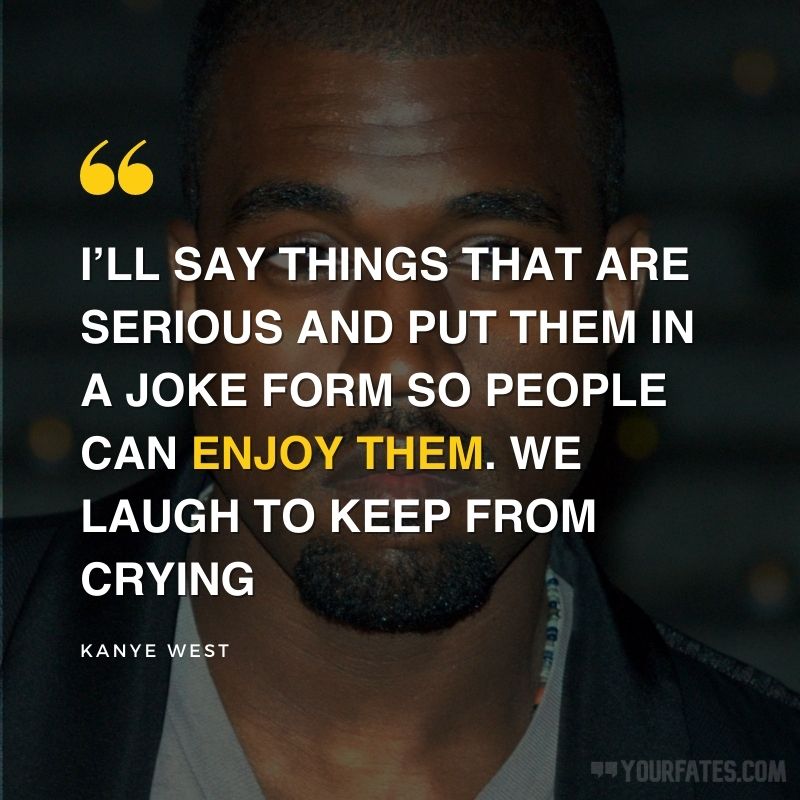 “You can’t look at a glass half full or empty if it’s overflowing.” – Kanye West

“I refuse to accept other people’s ideas of happiness for me. As if there’s a ‘one size fits all’ standard for happiness.” – Kanye West

“Nothing in life is promised except death.” – Kanye West

“Recognize and embrace your flaws so you can learn from them. Sometimes it takes a little polishing to truly shine.” – Kanye West

“I always feel like I can do anything. That’s the main thing people are controlled by: thoughts and perceptions of yourself… If you’re taught you can’t do anything, you won’t do anything” – Kanye West

“Memories have to be our most painful blessing.” – Kanye West

“Life is a b*tch depending how you dress her.” – Kanye West

“The plan was to drink until the pain is over, But what’s worse, the pain or the hangover?” – Kanye West

“For me giving up is way harder than trying.” – Kanye West

“Criticism can bother you, but you should be more bothered if there’s no criticism. That means you’re too safe” – Kanye West

“You’re not perfect, but you’re not your mistakes.” – Kanye West 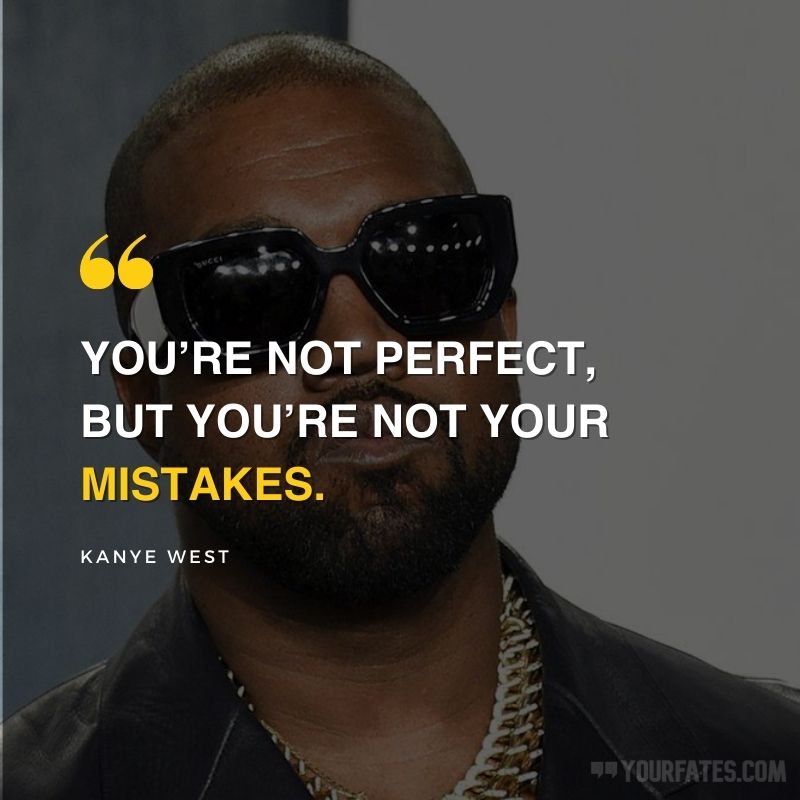 “Shoot for the stars, so if you fall you land on a cloud.” – Kanye West

“The prettiest people do the ugliest things.” – Kanye West

“I’m not comfortable with comfort. I’m only comfortable when I’m in a place where I’m constantly learning and growing.” – Kanye West

“You may be talented but you’re not Kanye West.” – Kanye West

“If y’all fresh to death, then I’m deceased.” – Kanye West

“If you have the opportunity to play this game of life you need to appreciate every moment. a lot of people don’t appreciate the moment until it’s passed.” – Kanye West

“They say your attitude determines your latitude.” – Kanye West

“They say people in your life are seasons and anything that happens is for a reason.” – Kanye West

“They say ya additude determines ya laditude.” – Kanye West

“I don’t particularly like photos of myself, though.” – Kanye West

“I would say my determination is way higher than my smartness.” – Kanye West Quotes

“It’s a tough world out there. You’re going to prepare yourself for politics, bad bosses, hating employees – and usually when you’re the absolute best, you get hated on the most.” – Kanye West

“When we die, the money we can’t keep, But we probably spend it all ’cause the pain ain’t cheap…” – Kanye West

“Being fresh is more important than having money.” – Kanye West 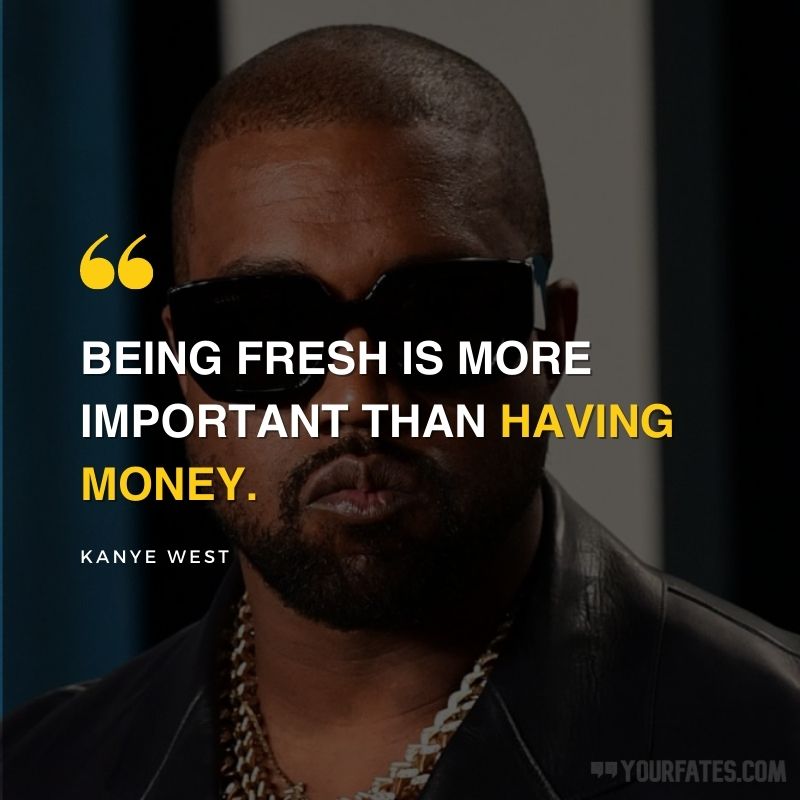 “I just think that when my confidence meets other people’s insecurity, that equals Kanye’s arrogant.” – Kanye West

“So I hope that there are people out there laughing. Laugh loud, please. Laugh until your lungs give out because I will have the last laugh.” – Kanye West

“The dinosaurs aren’t remembered for much more than their bones. When humanity’s gone, what do we give to this little planet that we’re on, and what could we do collectively, removing the pride?” – Kanye West

“Visiting my mind is like visiting the Hermès factory. Sh*t is real.” – Kanye West

“Let the music defuse all the tension.” – Kanye West

“I know I got angels watchin me from the other side.” – Kanye West

“There’s nothing I really wanted to do in life that I wasn’t able to get good at. That’s my skill. I’m not really specifically talented at anything except for the ability to learn. That’s what I do. That’s what I’m here for.” – Kanye West

“I’ve been saying how I feel at the wrong time.” – Kanye West 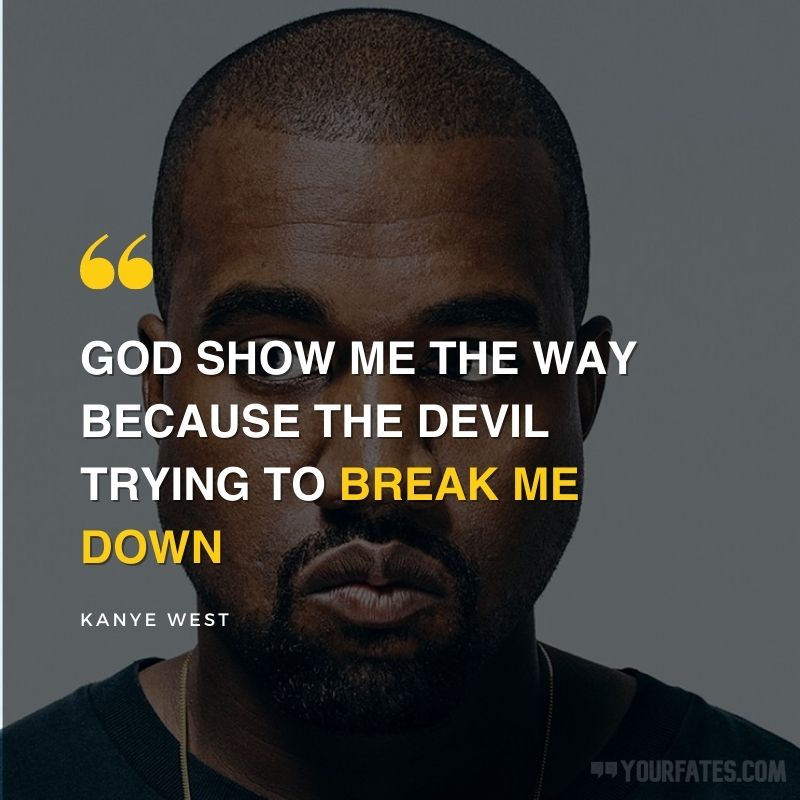 “It’s about whatever I want to make it about. It’s my world.” – Kanye West

“If you know you’re the best it only makes sense for you to surround yourself with the best.” – Kanye West

“I believe in myself like a five-year-old believes in himself. They say look at me, look at me! Then they do a flip in the backyard. It won’t even be that amazing, but everyone will be clapping for them.” – Kanye West

“This is my life homie, you decide yours” – Kanye West

“I’ve known my mom since I was zero years old. She is quite dope.” – Kanye West

“Everything I’m not makes me everything I am” – Kanye West

“I refuse to follow the rules where society tries to control people with low self-esteem.” – Kanye West

“I don’t expect to be understood at all.” – Kanye West

“I’m on the pursuit of awesomeness, excellence is the bare minimum.” – Kanye West

“Beauty has been stolen from the people and is being sold back to them as luxury.” – Kanye West

“Okay, for me, first of all, dopeness is what I like the most.” – Kanye West

“You basically can say anything to someone on an email or text as long as you put LOL at the end.” – Kanye West

“Believe in your flyness…conquer your shyness” – Kanye West

“Everyone’s always telling you to be humble. When was the last time someone told you to be great?” – Kanye West

“Sometimes people write novels and they just be so wordy and so self-absorbed. I am not a fan of books. I would never want a book’s autograph. I am a proud non-reader of books.” – Kanye West

“Go open up a book and read yourself to death.” – Kanye West

“If anyone’s reading this waiting for some type of full-on, flat apology for anything, they should just stop reading right now.” – Kanye West

“I always tell people ‘I dropped out of school in order to learn.” – Kanye West 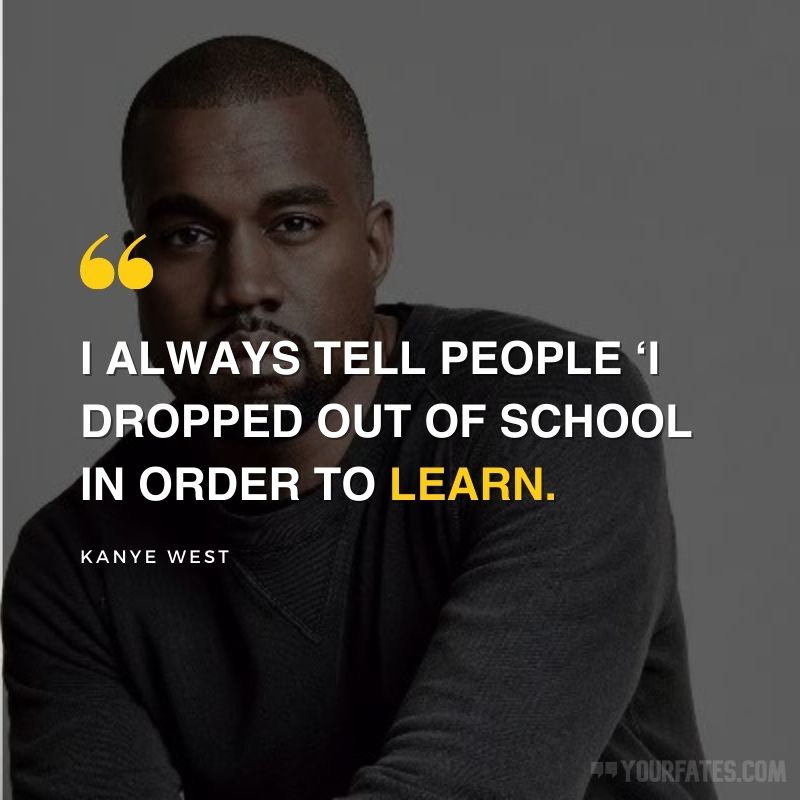 “I think people think that I pander to fashion…But I believe that the world can only be saved through design…Art is to be free. Design is to fix.” – Kanye West

“I’ve been connected to the most culturally important albums of the past four years, the most influential artists of the past ten years.” – Kanye West

“Sometimes I push the door close button on people running towards the elevator. I just need my own elevator sometimes, my 7-floor sanctuary.” – Kanye West

“Now, the greatest artist that God has ever created is working for him.” – Kanye West

“My beats was wack at one point, dog…I learned how to make hot beats. I’m focusing on rhyming now and I’m going to be the f**king best.” – Kanye West

“Creative output, you know, is just pain. I’m going to be cliché for a minute and say that great art comes from pain.” – Kanye West

“A lot of people were wondering what I was going to do if I didn’t win anything. I guess we’ll never know.” – Kanye West

“I refuse to negotiate. I do not negotiate. I can collaborate. But I’m an artist, so as soon as you negotiate, you’re being compromised.” – Kanye West

“Even a broke clock is right twice a day” – Kanye West

From being a rapper and producer to an entrepreneur and fashion designer, West has made his name in whatever field he entered. He is a true example of a versatile mindset. We hope you have enjoyed these famous Kanye West Quotes and Sayings and get inspired to work hard for your dreams.

We hope you like these collections of Kanye West Quotes. Also, If you’ve found us useful, please do consider telling your friends about it. All you have to do is send these quotes on WhatsApp and ask them to subscribe to us.

60 Bob Ross Quotes That Will Brighten Your Day