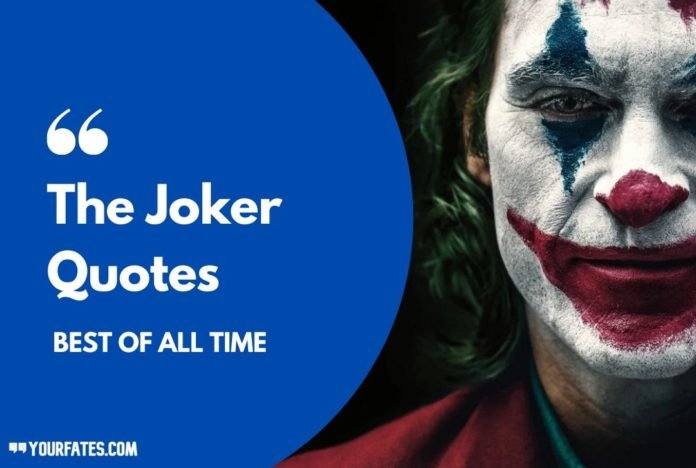 Whether you’re a fan of the comics or the movies, there isn’t anyone who isn’t familiar with the Joker. We have collected some of the best Joker Quotes on Humanity that really make you think. Keep Calm and Start Reading.

The Joker, ie Heath Ledger, died on 22 January 2008. His film Dark Knight was released after the death of the Ledger. Christopher Nolan’s third film of Batman trilogy immortalized Heath Ledger.

Joker is not a villain. There is a different kind of philosophy hidden in his characters and things. Nolan wrote the story of ‘The Dark Knight’, combining the 1988 graphic novel ‘The Joke’ and 1996’s ‘The Long Halloween’. Heath Ledger set a new benchmark through the character of Joker in it.

Check out these Joker quotes that will trigger your brain and make you see why some people go down a dark path in life.

2. “When the chips are down, these civilized people, they’ll eat each other.” – The Joker 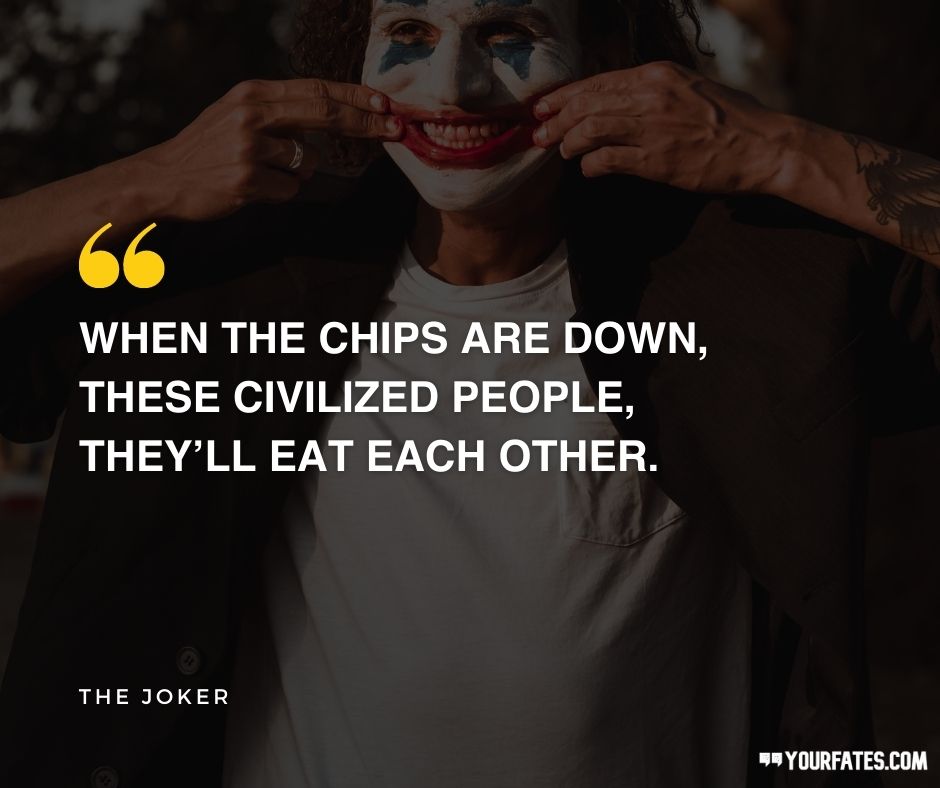 4. “I believe whatever doesn’t kill you, simply makes you stranger.” – The Joker

5. “Until their spirit breaks completely. Until they get a good look at the real Harvey Dent, and all the heroic things he’s done.” – The Joker

6. “I hope my death makes more sense cents than my life.” – The Joker

7. “Sometimes you have to play the role of a fool to fool the fool who thinks they are fooling you.” – The Joker

10. “The worst part of having a mental illness is people expect you to behave as if you don’t.” – The Joker 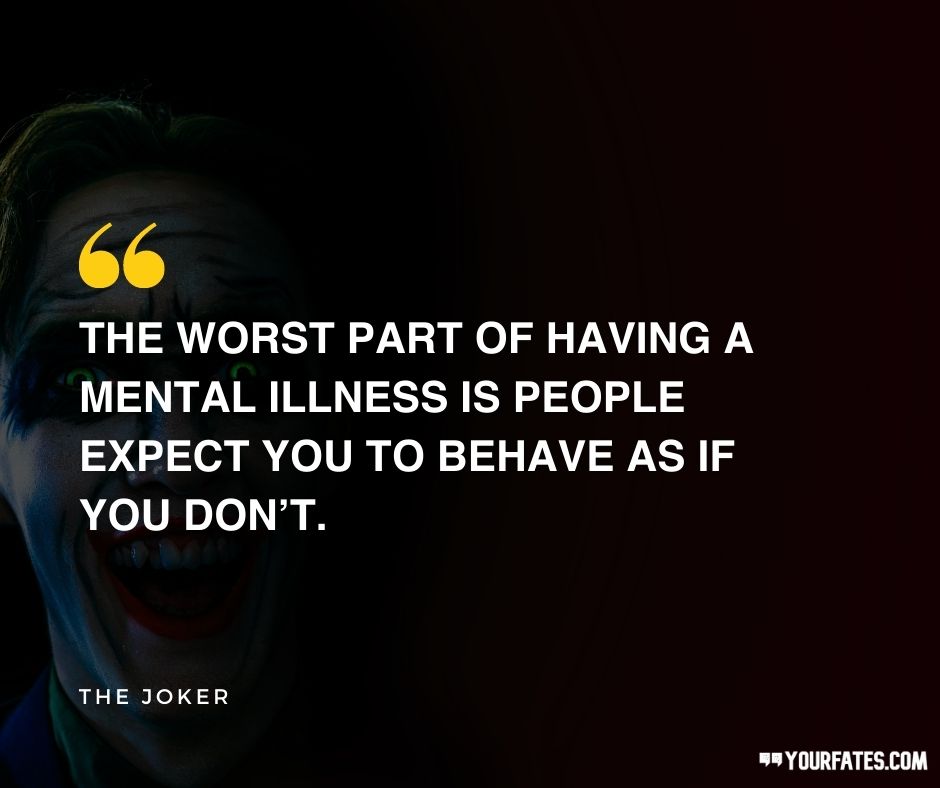 11. “You cant sell dreams to someone who has walked through nightmares.” – The Joker

12. “For my whole life, I didn’t know if I even really existed. But I do, and people are starting to notice.” – The Joker

17. “They laugh at me because I’m different. I laugh at then because they’re all the same.” – The Joker

18. “This city deserves a better class of criminal. And I’m gonna give it to them!” – The Joker

19. “You have nothing, nothing to threaten me with. Nothing to do with all your strength.” – The Joker

20. “Someday someone will break you so badly that you’ll become unbreakable.” – The Joker 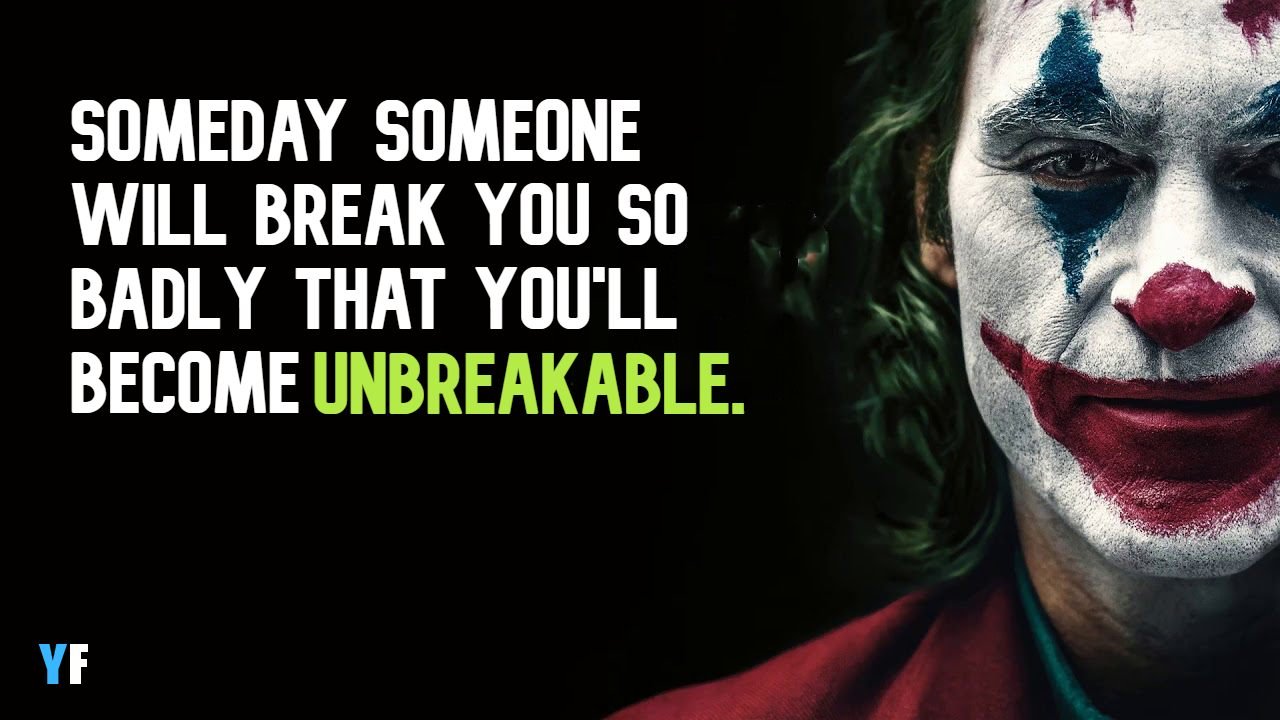 22. “One by One, they’ll hear my call. Then this wicked town will follow my fall.” – The Joker

23. “Madness is the emergency exit. You can just step outside, and close the door on all those dreadful things that happened. You can lock them away… forever.” – The Joker

25. “You didn’t think I’d risk losing the battle for Gotham’s soul in a fist fight with you? No. You need an ace in the hole. Mine’s Harvey.” – The Joker

27. “‎Introduce a little anarchy. Upset the established order, and everything becomes chaos. I’m an agent of chaos…” – The Joker

28. “They could put me in a helicopter and fly me up into the air and line up the bodies head to toe on the ground in delightful geometric patterns like an endless June Taylor dance routine — and it would never be enough. No, I don’t keep count. But you do. And I love you for it.” – The Joker

30. “I’m only laughing on the outside. My smile is just skin deep. If you could see inside, I’m really crying. You might join me for a weep.” – The Joker

31. “Rumour has it, Christmas is a time to share with family.” – The Joker

36. “The real joke is your stubborn, bone-deep conviction that somehow, somewhere, all of this makes sense! That’s what cracks me up each time.” – The Joker

38. “You see, in their last moment’s people show you who they really are.” – The Joker

40. “The only sensible way to live in this world is without rules. And tonight, you’re gonna break your one rule.” – The Joker

41. “Now comes the part where I relieve you, the little people, of the burden of your failed and useless lives. But, as my plastic surgeon always said: if you gotta go, go with a smile.” – The Joker

43. “Haven’t you ever heard of the healing power of laughter?” – The Joker

47. “Some people want to see you fail. Disappoint them.” – The Joker

48. “You will never make it if you care about what others think.” – The Joker

49. “I believe, whatever doesn’t kill you, simply makes you a stranger.” – The Joker

52. “And I won’t kill you because you’re just too much fun. I think you and I are destined to do this forever.” – The Joker

55. “It’s not about the money, it’s about sending a message. Everything burns!” – The Joker

59. “If the police expect to play against the Joker, they’d better be prepared to be dealt from the bottom of the deck!” – The Joker

61. “Before you judge me make sure that you are perfect.” – The Joker

62. “I’m not exactly sure what happened. Sometimes I remember it one way, sometimes another. If I’m going to have a past, I prefer it to be multiple choice!” – The Joker

66. “I think I felt better when I was locked up in the hospital.” – The Joker

67. “Nobody panics when things go “according to plan”. Even if the plan is horrifying!” – The Joker 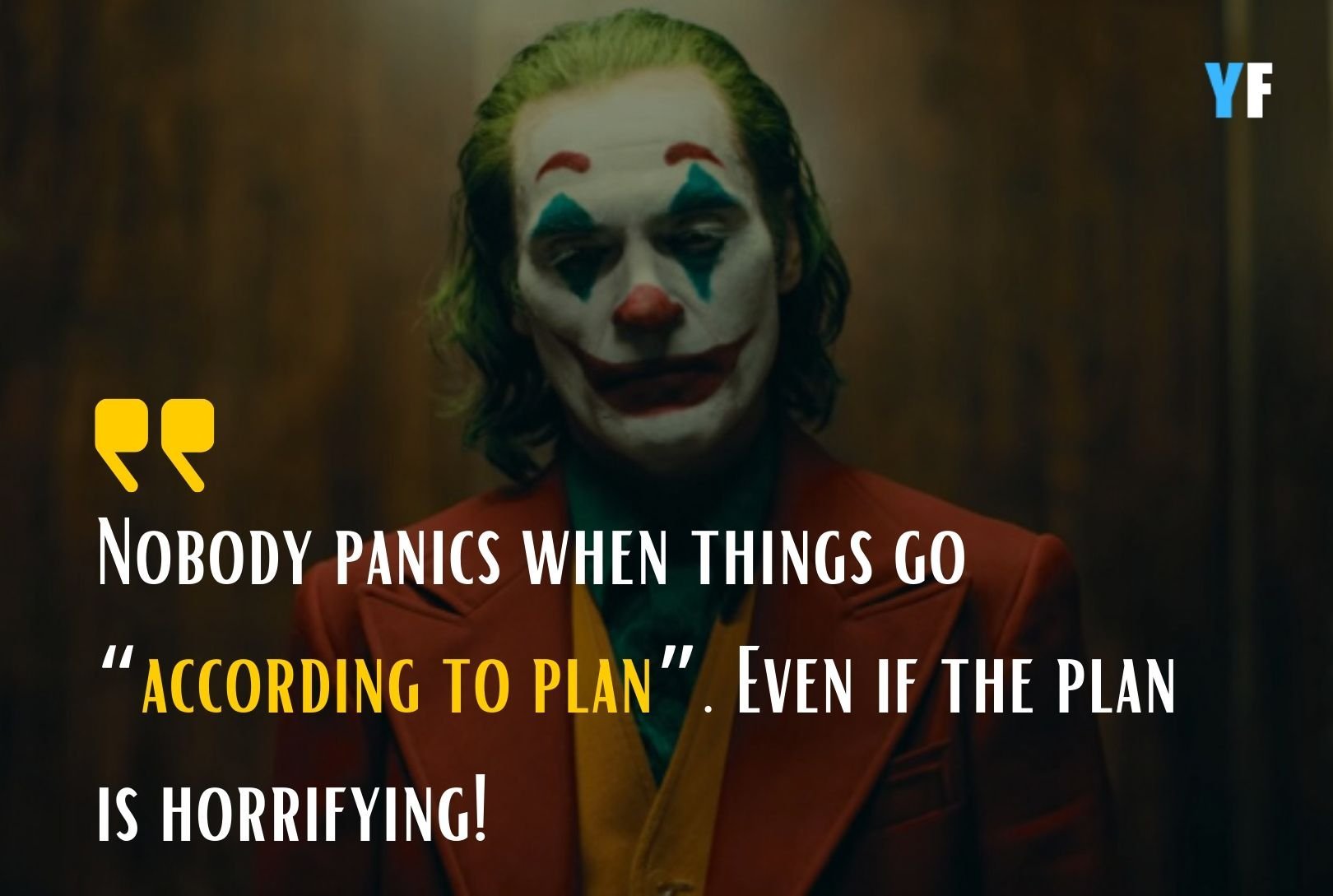 70. “The strongest hearts have the most scars!” – The Joker

72. “We stopped checking for monsters under our bed when we realized they were inside us.” – The Joker

73. “See I’m a man of simple taste. I like things such as gunpowder…dynamite and…gasoline!” – The Joker

74. “Maybe we can share one. You know, they’ll be doubling up, the rate this city’s inhabitants are losing their minds.” – The Joker 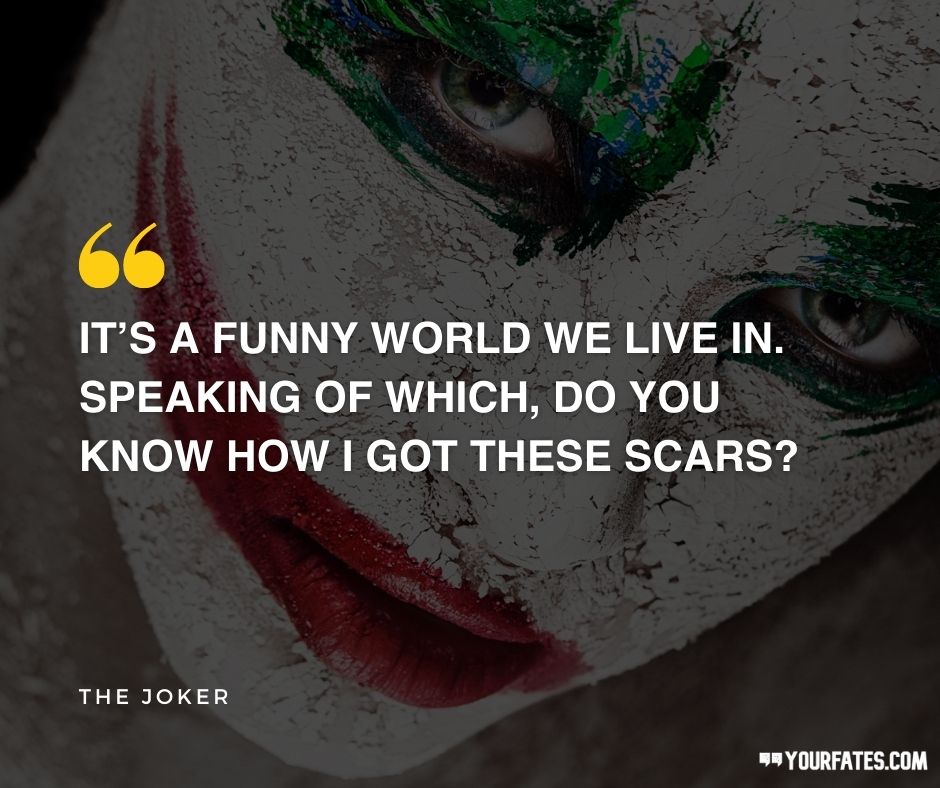 76. “‎Introduce a little anarchy upset the established order and everything becomes chaos I am an agent of chaos” – The Joker

77. “Madness, as you know is a lot like gravity all it takes is a little push.” – The Joker

79. “They need you right now but when they don’t they’ll cast you out like a leper!” – The Joker

80. “Ladies and murderers welcome to the big fight Batman you’re going down!” – The Joker 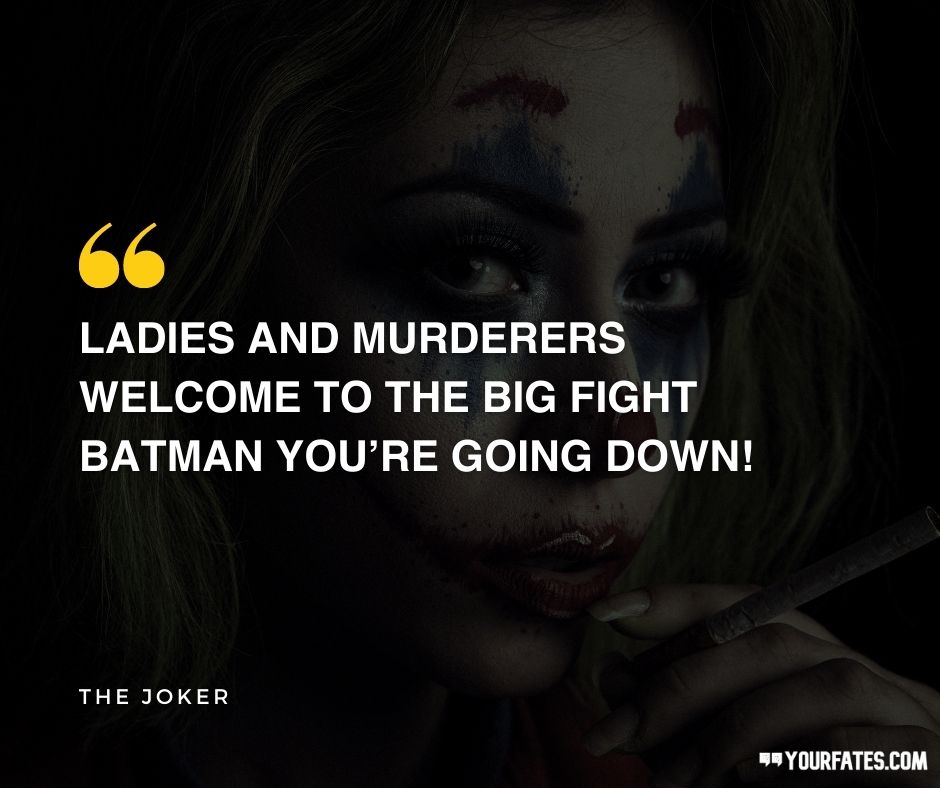 87. “I believe that whatever doesn’t kill you simply makes you stronger!” – The Joker

There is something about the Joker that fascinates fans. The Joker is one of the most iconic characters in popular culture, the Joker has been listed among the greatest comic book villains and fictional characters ever created.

Did you enjoy these Joker quotes? Which of the quotes was your favorite?

We hope you like these collections of Joker Quotes. Also, If you’ve found us useful, please do consider telling your friends about it. All you have to do is send these quotes on WhatsApp and ask them to subscribe to us.