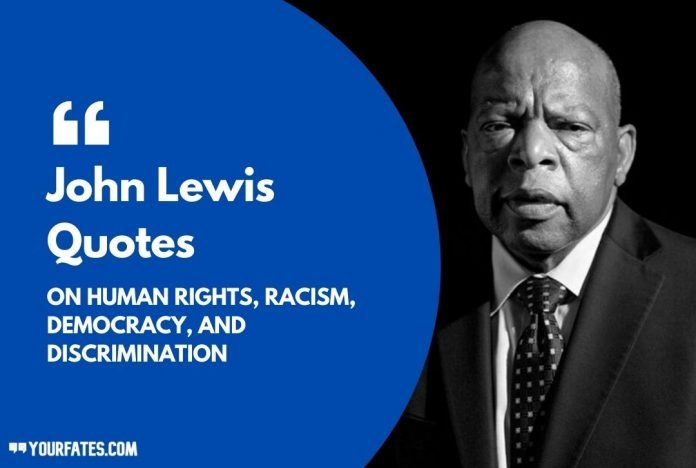 John Louis was one of the ‘Big Six’ leaders who fight for people’s rights since joining Congress in 1987. This agitating group was led by Martin Luth King Jr. In this article, we have collected the John Lewis Quotes which will show you his positive presence in history.

John Louis was an American politician, civil rights, and activist who was born outside of Troy, Alabama, on February 21, 1940. His parents were sharecroppers in rural Pike County, Alabama. He was born in the era of racial segregation when segregation was legal.

Dr. Martin Luther King, Jr., and other civil rights leaders, inspired him to speak out against the unfair treatment of black people. John Louis fight for human rights People says he was “one of the most courageous persons the Civil Rights Movement ever produced.” 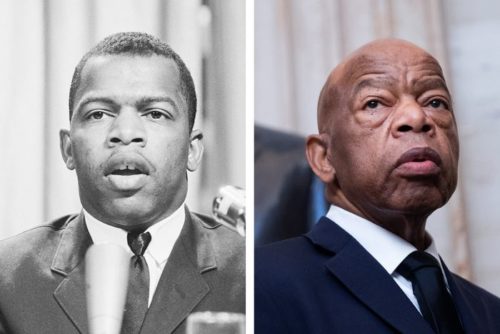 John Lewis accepted that activism was the duty of any individual who saw shamefulness, and he spent a lifetime devoted to the reason.

On July 17, 2020, Lewis died at the age of 80 after a six-month battle with the disease in Atlanta, Georgia. The House of Representatives, Nancy Pelosi, confirmed her death, describing her as one of the greatest heroes of American history. National flags on government buildings across America, including the White House, were bowed in his honor.

1. “There’s nothing wrong with a little agitation for what’s right or what’s fair.” – John Lewis

2. “We need some creative tension; people crying out for the things they want.” – John Lewis 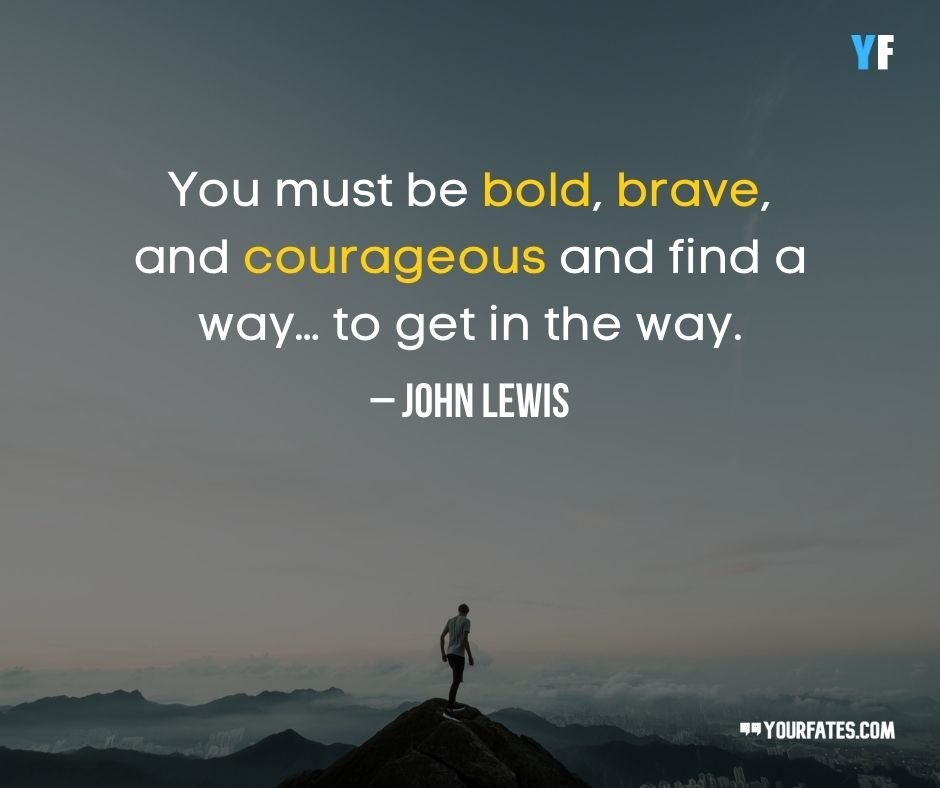 7. “Too many people struggled, suffered, and died to make it possible for every American to exercise their right to vote.” – John Lewis

8. “Never become bitter, and in the process, be happy and just go for it.” – John Lewis

9. “I really believe that all of us, as Americans… we all need to be treated like fellow human beings.” – John Lewis

10. “Too many of us still believe our differences define us.” – John Lewis

11. “Sometimes I hear people saying, ‘Nothing has changed.’ Come and walk in my shoes.” – John Lewis

12. “To make it hard, to make it difficult, almost impossible for people to cast a vote is not in keeping with the democratic process.” – John Lewis

13. “The vote is precious. It’s almost sacred, so go out and vote like you never voted before.” – John Lewis

14. “Some of us gave a little blood for the right to participate in the democratic process.” – John Lewis

15. “Some people have told me that I am a rare bird in the blue sky of dreamers.” – John Lewis

16. “It is only through examining history that you become aware of where you stand within the continuum of change.” – John Lewis

17. “I believe in freedom of speech, but I also believe that we have an obligation to condemn speech that is racist, bigoted, anti-Semitic, or hateful.” – John Lewis

18. “Every generation leaves behind a legacy. What that legacy will be is determined by the people of that generation. What legacy do you want to leave behind?” – John Lewis

19. “If you ask me whether the election of Barack Obama is the fulfillment of Dr. King’s dream, I say, ‘No, it’s just a down payment.” – John Lewis

20. “We’re one people, and we all live in the same house. Not the American house, but the world house.” – John Lewis 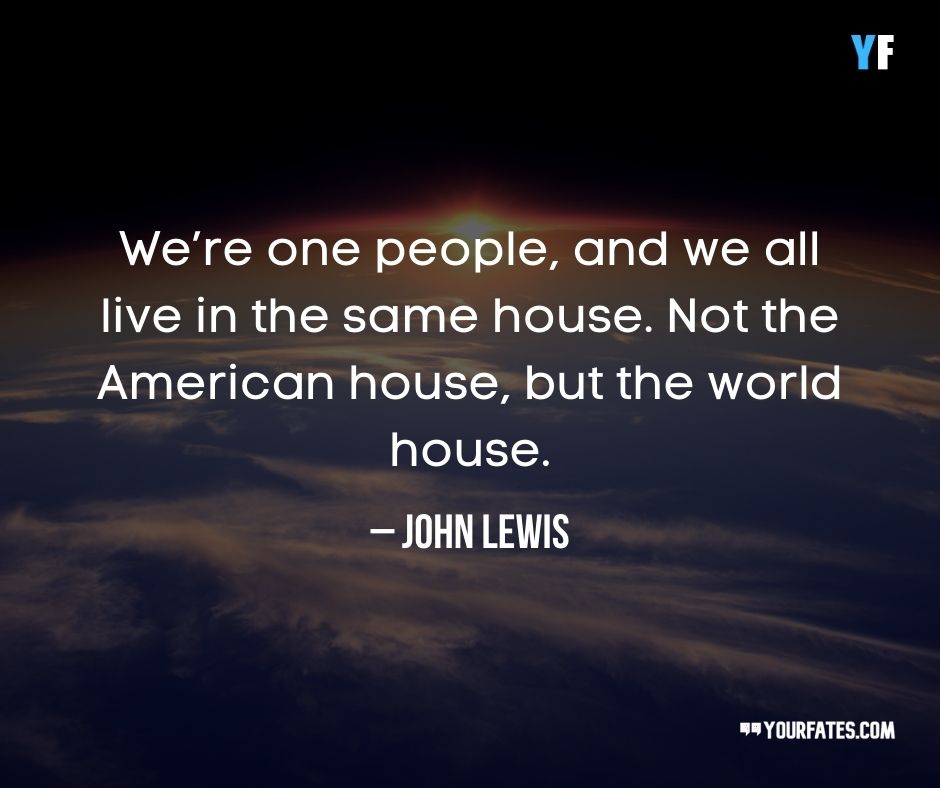 21. “Not one of us can rest, be happy, be at home, be at peace with ourselves until we end hatred and division.” – John Lewis

23. “Following the teaching of Gandhi and Thoreau, Dr. King, it set me on a path. And I never looked back.” – John Lewis

24. “What I try to tell young people is that if you come together with a mission, and it’s grounded with love and a sense of community, you can make the impossible possible.” – John Lewis

26. “It was not enough to come and listen to a great sermon or message every Sunday morning and be confined to those four walls and those four corners. You had to get out and do something.” – John Lewis

29. “Get in good trouble, necessary trouble, and help redeem the soul of America.”– John Lewis

30. “The assassination of Martin Luther King, Jr. made me very, very sad, and I mourned and I cried like many of our citizens did.” – John Lewis

31. “You have to tell the whole truth, the good and the bad, maybe some things that are uncomfortable for some people.” – John Lewis 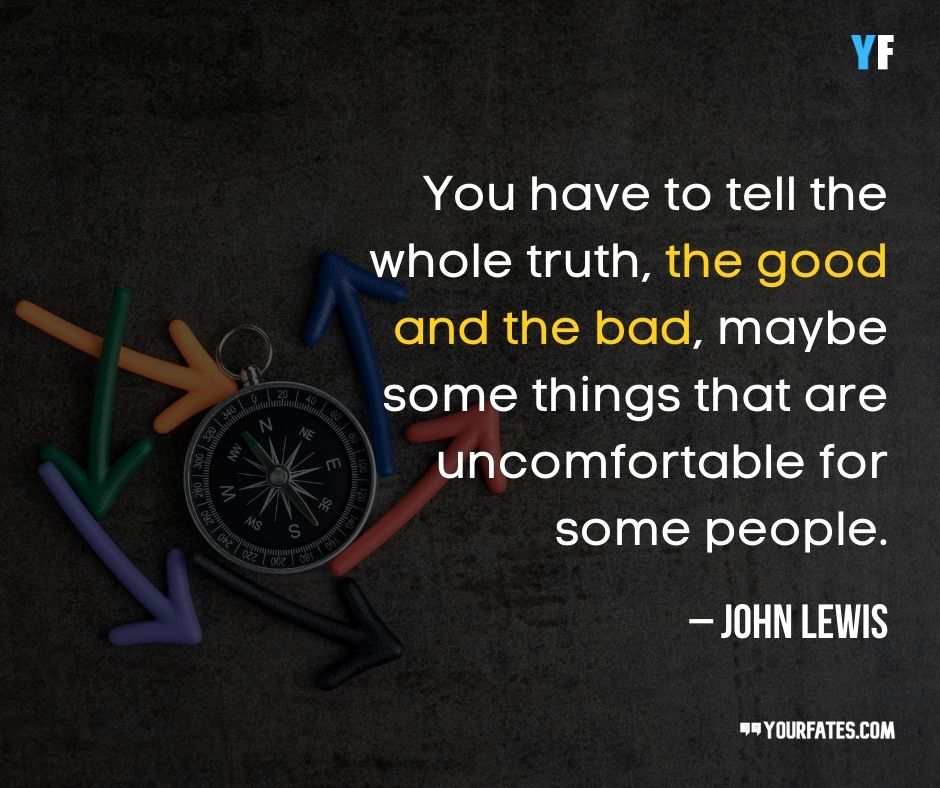 33. “I remember back in the 1960s – late ’50s, really – reading a comic book called ‘Martin Luther King Jr. and the Montgomery Story.’ Fourteen pages. It sold for 10 cents. And this little book inspired me to attend non-violence workshops, to study about Gandhi, about Thoreau, to study Martin Luther King, Jr., to study civil disobedience.” – John Lewis

34. “We are one people with one family. We all live in the same house… and through books, through information, we must find a way to say to people that we must lay down the burden of hate. For hate is too heavy a burden to bear.” – John Lewis

35. “I was so inspired by Dr. King that in 1956, with some of my brothers and sisters and first cousins – I was only 16 years old – we went down to the public library trying to check out some books, and we were told by the librarian that the library was for whites only and not for colors. It was a public library.” – John Lewis

36. “I believe race is too heavy a burden to carry into the 21st century. It’s time to lay it down. We all came here in different ships, but now we’re all in the same boat.” – John Lewis

37. “The scars and stains of racism are still deeply embedded in the American society.” – John Lewis

38. “When I was a student, I studied philosophy and religion. I talked about being patient. Some people say I was too hopeful, too optimistic, but you have to be optimistic just in keeping with the philosophy of non-violence.” – John Lewis

39. “The government, both state and federal, has a duty to be reasonable and accommodating.” – John Lewis

41. “The vote controls everything that you do.” – John Lewis

42. “The vote is the most powerful nonviolent tool we have.” – John Lewis

44. “I believed innocently and profoundly as a child that the world could be a better place.” – John Lewis

45. “Sometimes I feel like crying, tears of happiness, tears of joy, to see the distance we’ve come and the progress we’ve made.” – John Lewis 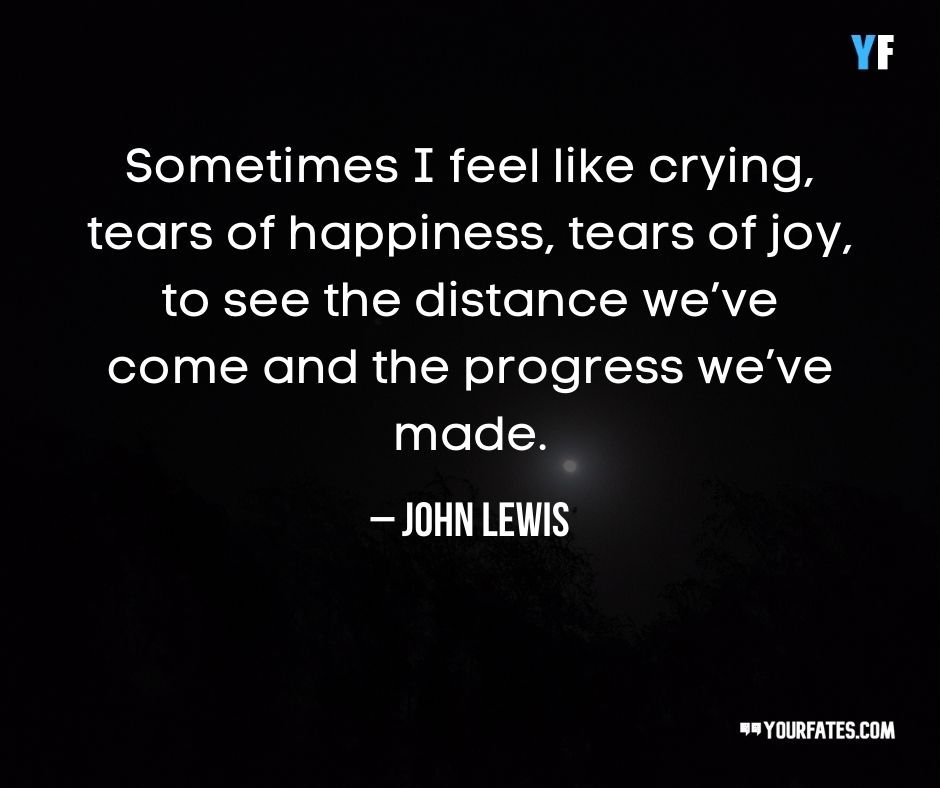 48. “The civil rights movement was based on faith. Many of us who were participants in this movement saw our involvement as an extension of our faith. We saw ourselves doing the work of the Almighty. Segregation and racial discrimination were not in keeping with our faith, so we had to do something.” – John Lewis

49. “Nothing can stop the power of a committed and determined people to make a difference in our society. Why? Because human beings are the most dynamic link to the divine on this planet.” – John Lewis

50. “Release the need to hate, to harbor division, and the enticement of revenge. Release all bitterness.” – John Lewis

51. “You are the light. Never let anyone — any person or any force — dampen, dim or diminish your light.” – John Lewis

52. “America, a nation destined for greatness but tarnished by a persistent, nagging untruth” – John Lewis

53. “Hold only love, only peace in your heart, knowing that the battle of good to overcome evil is already won.” – John Lewis

55. “If you’re not hopeful and optimistic, then you just give up. You have to take the long hard look and just believe that if you’re consistent, you will succeed.” – John Lewis

56. “It’s a shame and a disgrace that so few people take part in the political process.” – John Lewis

57. “We are tired of being beaten by policemen. We are tired of seeing our people locked up in jails over and over again. And then you holler, ‘Be patient.’ How long can we be patient?” – John Lewis

58. “You cannot be afraid to speak up and speak out for what you believe. You have to have courage, raw courage.” – John Lewis

60. “Rosa Parks inspired me to find a way to get in the way, to get in trouble… good trouble, necessary trouble.” – John Lewis

We hope you like these collections of John Lewis Quotes. Also, If you’ve found us useful, please do consider telling your friends about it. All you have to do is send these quotes on WhatsApp and ask them to subscribe to us.