65 Steve Jobs Quotes That Will Motivate You to Work Hard 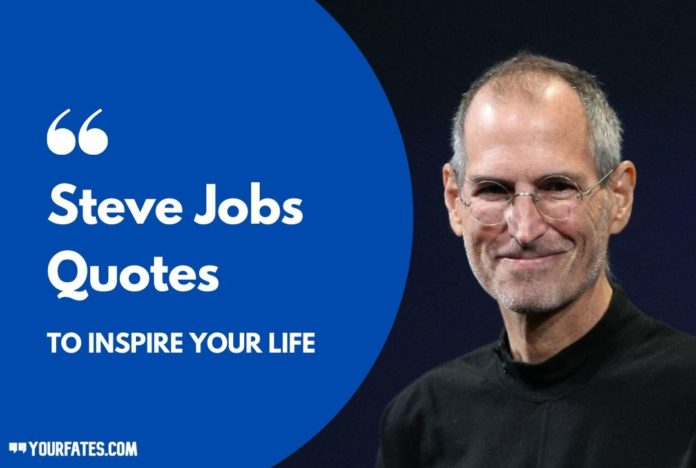 “Your time is limited, so don’t waste it living someone else’s life” – Steve Jobs

Who in the world does not know about ‘Apple’? But here let’s look into the personality of the founder of this wonderful brand. We have brought the amazing collection of Steve Jobs Quotes and Sayings that will motivate you to work hard for your dreams.

Steve Jobs was an American entrepreneur and investor.
He was raised by adoptive parents in California. He joined engineering college but dropped out of it in between. He, however, was interested in Calligraphy and took classes in Calligraphy in his college and later on used it in designing Mac.

After dropping out of his college, Steve, with his friend Steve Wozniak, started a company called”Apple”. Within 10 years they grew the company to the worth of $2 Billion and then he got fired from his own company. But, not giving up, he started it all over again and built another company named ‘Next’ which afterward got acquired by ‘Apple’ and he returned to ‘Apple’.

He always believed in providing the best quality products to his customers.
Jobs once when asked about his goals regarding Apple answered: “Our goal is to make the best personal computers in the world and the products that we are proud to sell.”
After living an ambitious 56 years of his life, Steve Jobs died in October 2011 after fighting pancreatic cancer for a decade.

He believed in loving the work he did. He has mentioned many times in his speeches about his love for technology and that his love for his work was what made him successful.
He believed that every decision and action we take today will make sense after years. He has always taught people to trust in themselves and the universe.

Let’s look into the famous quotes by an entrepreneur who has changed the lives of people through his innovations. Presenting you Steve Jobs Quotes and Sayings:

1. “Love yourself and what you do – the only key to success.” – Steve jobs

2. “If you define the problem correctly, you almost have the Solution.” – Steve Jobs

3. “A lot of times, people don’t know what they want until you show it to them.” – Steve Jobs

4. “Don’t let the noise of other people’s opinions drown out your own inner voice.” – Steve Jobs

5. “The people who are crazy enough to think they can change the world are the ones who do.” – Steve Jobs

6. “Pursue your dreams and see the opportunities in life’s setbacks.” – Steve Jobs

7. “Everything around you that you call life was made up by people that were no smarter than you…”  – Steve Jobs

9. “Be a yardstick of quality. Some people aren’t used to an environment where excellence is expected.” – Steve Jobs

10. “Things don’t have to change the world to be important.” – Steve Jobs

11. “The design is not just what it looks like, a design is how it works.” – Steve Jobs

12. “Get closer than ever to your customers. So close that you tell them what they need well before they realize it themselves.” – Steve Jobs

13. “My favorite things in life don’t cost any money. It’s really clear that the most precious resource we all have is time.” – Steve Jobs

14. “Innovation distinguishes between a leader and a follower.” – Steve Jobs

15. “The secret of my success is that we have gone to exceptional lengths to hire the best people in the world.”- Steve Jobs

16. “I am as proud of many of the thing we haven’t done the things we have done innovation is saying no to a thousand things.” – Steve Jobs

18. “Let’s go invent tomorrow instead of worrying about what happened yesterday.” – Steve Jobs

19. “You can’t just ask customers what they want and then try to give that to them. By the time you get it built, they’ll want something new.” – Steve Jobs

20. “I’m convinced that about half of what separates successful entrepreneurs from the non-successful ones is pure perseverance.” – Steve Jobs

21. “Our goal is to make the best devices in the world, not to be the biggest.” – Steve Jobs

22. “Mistakes teach you important lessons. Every time you encounter one, you’re a step closer to your goal.” – Steve Jobs

23. “If you leave your life like every day is the last, One day you are gonna be right.” – Steve Jobs

24. “Going to bed at night saying we’ve done something wonderful… that’s what matters to me.”  – Steve Jobs

26. “We do no market research. We don’t hire consultants. We just want to make great products.” – Steve Jobs

27. “If you are working on something exciting that you really care about, you don’t have to be pushed. The vision pulls you.” – Steve Jobs

28. “You’ve got to start with the customer experience and work back toward the technology, not the other way around. “- Steve Jobs

29. “You have to be burning with an idea, or a problem, or a wrong that you want to right. if you’re not passionate enough from the start. You’ll never stick it out.” – Steve Jobs

30. “Being the richest man in the cemetery doesn’t matter to me. Going to bed at night saying we’ve done something wonderful, that’s what matters to me.” – Steve Jobs

31. “Quality is more important than quantity. one home run is much better than two doubles.” – Steve Jobs

32. “Your worth does not revolve around what others think. Your worth is what you put in yourself and know in your heart.” – Steve Jobs

33. “Details matter, it’s worth waiting to get it right.” – Steve Jobs

34. “Everybody in this country should learn how to program a computer.. because it teaches you how to think.” – Steve Jobs

35. “You have to have a lot of passion for what you do… because if you don’t, any rational person would give up.” – Steve Jobs

36. “Greatness is more than Potential; It requires skillful execution of that Potential.” – Steve Jobs

38. “Have the courage to follow your heart and intuition. They somehow know what you truly want to become.” – Steve Jobs

39. “Sometimes when you innovate, you make mistakes. It is best to admit them quickly.” – Steve Jobs

42. “Your time is limited, so don’t waste it living someone else’s life.” – Steve Jobs

45. “When you’re in a startup, the first ten people will determine whether the company succeeds or not.” – Steve Jobs

46. “Average people allow time to impose its will on them; exceptional people impose their will on their time.” – Steve Jobs

47. “Sometimes life will hit you in the head with a brick, don’t lose faith.” – Steve Jobs

48. “Get closer than ever to your customer. So close that you tell them what they need well before they realize it themselves.” – Steve Jobs

49. “You gotta act. You gotta be willing to crash and burn. If you’re afraid of failing, you won’t get very far. ” – Steve Jobs

51. “Great things in business are never done by one person; they’re done by a team of people.” – Steve Jobs

52. “Be Yourself Quotes: Trusting in yourself, not what you accomplish, is the key to success.” – Steve Jobs

53. “Some people think design means how it looks. But of course, if you dig deeper, it’s really how it works.” – Steve Jobs

54. “I think if you do something and it turns out pretty good, then you should go do something else wonderful, not dwell on it for too long. Just figure out what’s next.” – Steve Jobs

55. “It’s impossible to fail if you learn from your mistakes. Don’t give up.”  – Steve Jobs

58. “If someone walks out of your life, it gives someone you need a chance to walk in.” – Steve Jobs

61. “Everything around you that you call life was made up by people, and you can change it.” – Steve Jobs

63. “You can’t connect the dots looking forward; you can only connect them looking backward. So you have to trust that the dots will somehow connect in your future.” – Steve Jobs

64. “Don’t let the noise of others’ opinions drown out your own inner voice.” – Steve Jobs

65. “I don’t care about being right. I care about success and doing the right thing.” – Steve Jobs

What is the famous line of Steve Jobs?

“We’re here to put a dent in the universe. Otherwise, why else even be here?”

Always loyal to his work, Steve Jobs is an inspiration for all of us to live life with an ambition to always add value to others’ lives. We hope these famous Steve Jobs Quotes and Sayings help in developing a love towards your work.

We hope you like these collections of Steve Jobs Quotes. Also, If you’ve found us useful, please do consider telling your friends about it. All you have to do is send these quotes on WhatsApp and ask them to subscribe to us.