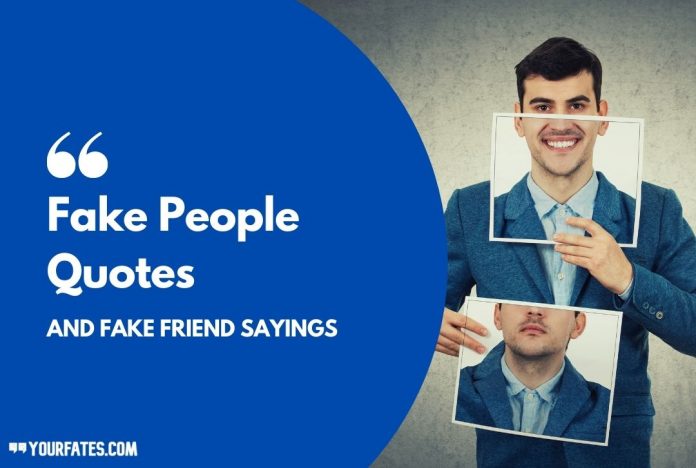 Fake People Quotes: Throw the fakeness away and you will instantly lose a hundred pounds of weight from your brain.

To hide one lie people have to lie a hundred more times, similarly just to maintain a fake layer of lifestyle and personality, people will get wrapped in tonnes of layers of fakeness, and before they realise, nothing anymore is real about them.

“I care”- that’s what they said, but in the end, they couldn’t care less. This is the one prominent sign of fake people in your circle of people. But who are fake people? Answer-people who love to pretend and create a false world for others and for their-selves both emotionally and materialistically. They will fake friendships, tell emotional pretentious stories about them, and buy a useless expensive mobile just to maintain their stature.

But at the end of the day, being genuine is a quality which successful and happy people swear by. No lying, no pretending, no show-offs, just a beautifully flowing life.

So to highlight the importance of genuinity in our lives, we bring to you the best collection of fake people quotes, read on and be real:

1. “Walk away from people who just care about themselves.”

2. “Don’t become so nice in this world where all are wearing a mask on their face to fool you.”

3. “When you can’t be real then don’t make fake promises.”

4. “Stay away from fake people because you don’t know when they will throw you.”

5. “Fake people will talk about you good in front of you and bad behind you.”

6. “When you have to find who are the real ones then look at their hearts not face.”

8. “It is good that you leave because there is no room for fake people in my life.”

9. “Trust someone when their action match their words.”

10. “Once I trusted you but you broke it and now I prefer to stay away from you.”

11. “If you came in my life to use me then I will throw you out of my life like a garbage.”

13. “It is better to stay alone rather being around with people who don’t value and respect you.”

14. “Be aware because you don’t know who are real ones in your life.” 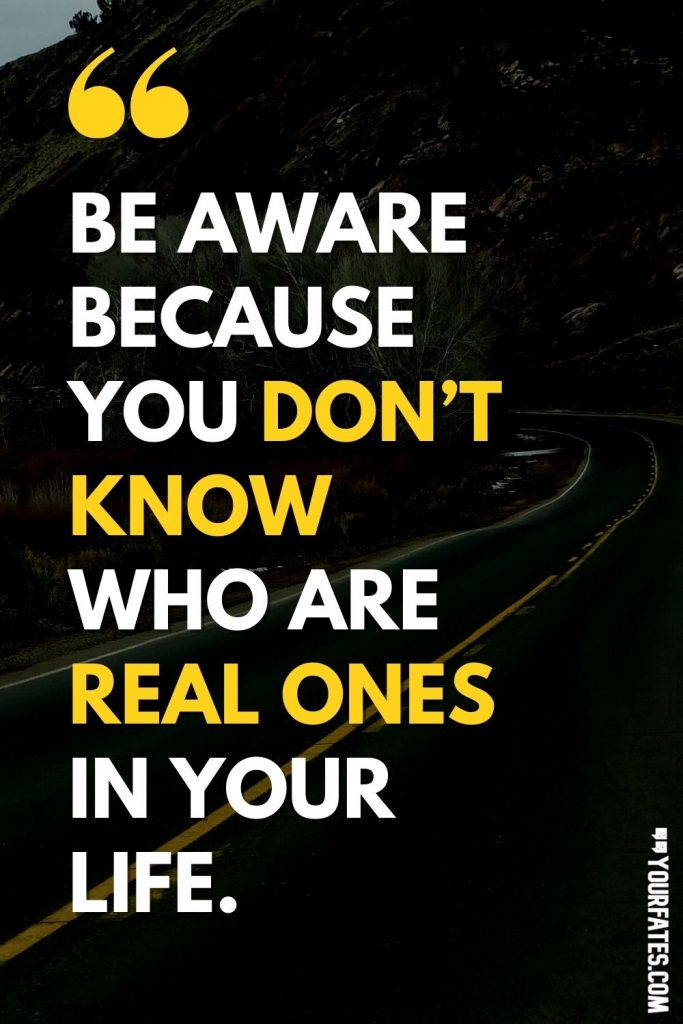 15. “Sometimes it is good to have fake peoples because then you will understand who are the real ones.”

16. “Never water yourself down just because someone can’t handle you at 100 proof.”

19. “Don’t trust everything you see. Even salt looks like sugar.”

21. “It’s not about who is real to your face, it’s about who stays real behind your back.”

24. “People don’t change, they reveal who they really are.”

28. “Not everyone deserves to know the real you. Let them criticize who they think you are.”

31. “Sometimes it’s not the people who change, it’s the mask that falls off.”

32. “Some people forget about you until they want something from you.”

33. “Fake is the new trend and everyone seems to be in style.”

34. “Fake friends: once they stop talking to you, they start talking about you.”

35. “Fake people are always jealous of your achievement.”

38. “When you fall fake people will smile but true ones will always help you to get up.”

39. “Fake people always stay with you in your good times and leave you in your bad times.”

40. “Don’t trust everything that you see because there are many things that you don’t know about them.”

41. “Fake people will always hate you because you are better from them so move forward and stay away.”

42. “You don’t know what are they hiding in their heart so don’t trust until you find.”

43. “There are many fake people but you will find true ones in your life.”

44. “It is better having an enemy rather having fake friends beside me.”

45. “Do not trust everyone easily because you don’t know who is your true friends and who is your enemy.”

47. “Don’t spend your precious time with fake people because you have important things to do in life.”

48. “Don’t fall for fake smile because you don’t know what are they planning in their mind.”

49. “Make a distance from the people who only come to you when they need something from you.”

50. “Real ones will always prove themselves.”

51. “Real ones will walk with you till the end but fake people will disappear.”

52. “Fake people don’t care what happens with you because they only care about themselves.”

53. “Fake people will fade away when you are in trouble only real ones will remain.”

54. “Some people come in your life to spread darkness so stay away from them.”

55. “Choose friends wisely because you don’t know who is your enemy.”

56. “Don’t pretend to be real because I know you are here for your own benefit.”

57. “I hate people when they pretend to be nice to you and later leave you because you have no use to them.” 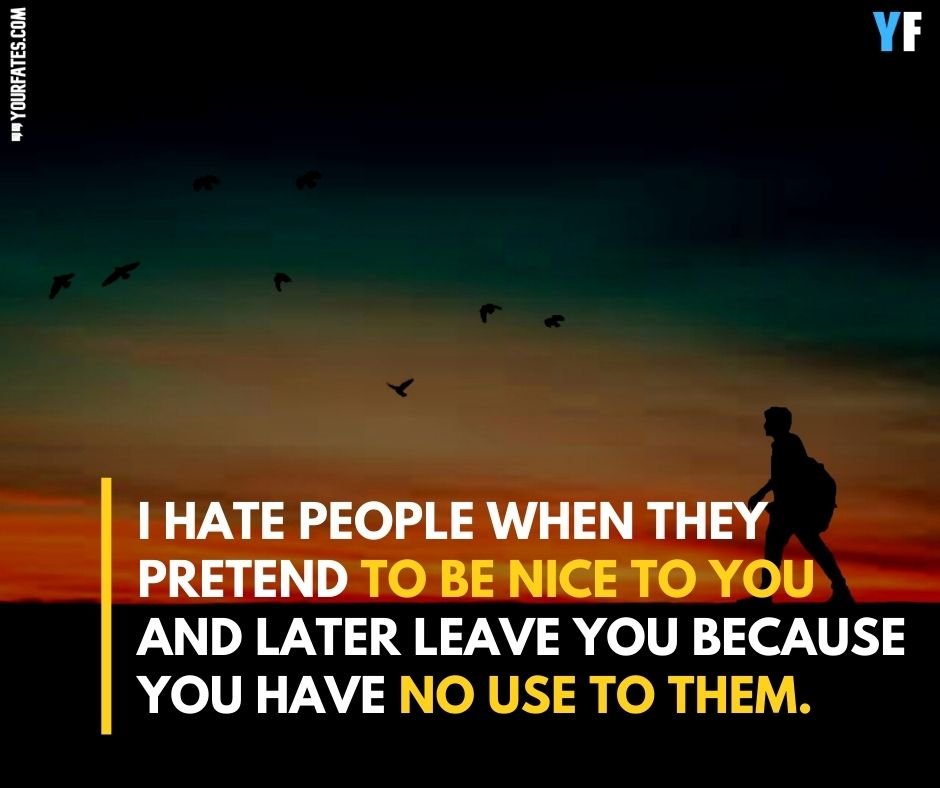 58. “Difficult situations in life always prove who are the real ones and who is the fake one.”

59. “Fake people show their colors when they have no use of you anymore.”

60. “Choose people carefully because there are a lot of fake ones in the world.”

Best Quotes About Fake Friends and moving on

61. “A friendship that can cease has never been real.” – St. Jerome

63. “Betrayal is common for men with no conscience.”- Toba Beta

64. “I don’t have time for fake friends anymore. Either be real or be gone.” – Unknown

65. “If I doubt your intentions I will never trust your actions.” – Carlos Wallace

66. “I hate those who play with feelings of others.” – Dominic Carey

67. “When people smile at a rich man, they are smiling at his wallet.”- Matshona Dhliwayo

68. “I love fake people provided they are mannequins.”- Pushpa Rana

69. “Betray a friend and you’ll often find you have ruined yourself.” — Aesop

70. “Betrayal is never easy to handle and there is no right way to accept it.” – Christine Feehan

71. “A true friend is one who overlooks your failures and tolerates your success!.” – Doug Larson

72. “He who is jealous, is never jealous of what you see, with what is imagined is enough.” – Jacinto Benavente

73. “Don’t fear the enemy that attacks you, but the fake friend that hugs you.” – Unknown

74. “Best friends have 11 letters, but so does Backstabber.” – Wiz Khalifa

75. “I hate fake people. You know what I’m talking about. Mannequins.” – Jarod Kintz

76. “Make sure the lions you roll with aren’t snakes in disguise.” – Genereux Philip

78. “An honest enemy is better than a best friend who lies.” – Vandi Tanko

79. “Some friends are like pennies, two-faced and worthless.” – Unknown

80. “Fake friends are with you today and against you tomorrow. Whatever they say defines them not you.” – Shizra

81. “We never lose friends, fake ones are exposed.” – Carlos Wallace

82. “No person is your friend who demands your silence, or denies your right to grow.” – Alice Walker

83. “At some point, you have to realize that some people can stay in your heart but not in your life.” – Sandi Lynn

84. “Lovers have a right to betray you, friends don’t.” – Judy Holliday

87. “Stay true to yourself. An original is worth more than a copy.” – Suzy Kassem

88. “Better an honest enemy than a false friend.” – German Proverb

89. “Time passes and you begin to see, people for who they really are and not who they pretend to be.” – Scarlet Koop

91. “We never lose friends. We simply learn who the real ones are.” – Unknown

92. “Knowledge planted in truth grows in truth. Strength born of peace loses nothing to hate.” – Aberjhani

93. “It makes no sense to try to extend a friendship that was only meant to be a season into a lifetime.” – Mandy Hale

94. “Learn to use the criticism as fuel and you will never run out of energy.” – Orrin Woodward

95. “A true friend never gets in your way unless you happen to be going down.” – Arnold H. Glasow

96. “You create more space in your life when you turn your excess baggage to garbage.” – Chinonye J. Chudolue

98. “Letting go of toxic people in your life is a big step in loving yourself.” – Hussein Nishah

99. “Most people want to see you do better, but not doing better than them.” – London Mond

100. “Fear of something is at the root of hate for others, and hate within will eventually destroy the hater.” – George Washington Carver

101. “The strong-minded rise to the challenge of their goals and dreams. The weak-minded become haters.” – Steve Maraboli

105. “Friendship is delicate as a glass, once broken it can be fixed but there will always be cracks.” – Waqar Ahmed

Whatever it is that is urging you to be fake, fear of non-acceptance, judgments, or the desire for popularity, throw them all in the river because, in the end, everyone is living their own lives, everyone has their own stories and there is not the slightest bit need of losing your genuineness. So let’s keep our stories real and raw. Keep reading and sharing.

We hope you like these collections of Fake People Quotes. Also, If you’ve found us useful, please do consider telling your friends about it. All you have to do is send these quotes on WhatsApp and ask them to subscribe to us.