100 Failure Quotes To Help You Bounce Back 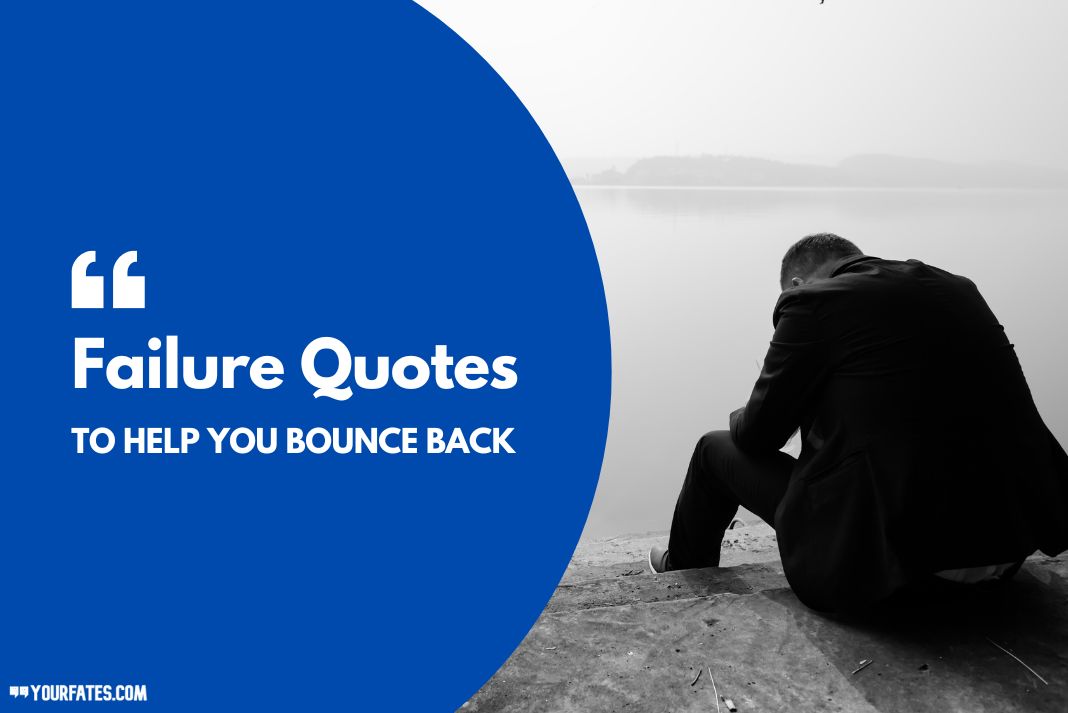 Have you failed at something you desperately wanted to achieve? I would like to remind you that failure is the first step of success. But facing failure is not an easy task. We have brought you this amazing collection of Failure Quotes by famous authors, philosophers and other personalities that will help you overcome failure and give another try to your goals.

Failure is actually a cost of success. No one has ever achieved success in life without failing.

Failure is an indelible part of success. The best way to tackle failures is to change your perspective towards it. See failure as a part of your process. You can never really fail until you are trying. Real failure is when you give up.

It is alright if you couldn’t achieve your goals this time. Give another try and if you still fail, give one more try.
Keep trying until you achieve it because once you will achieve your goals, the number of times you fail will not matter. Infact, it will become an example for others to never give up.

Here’s a list of Failure Quotes that will motivate you to get back to your goals. Also share these quotes with your friends who you think need to hear these quotes.

Don’t forget to also read our collection of Patience Quotes that will transform your life.

“Failures are finger posts on the road to achievement.” – C. S. Lewis 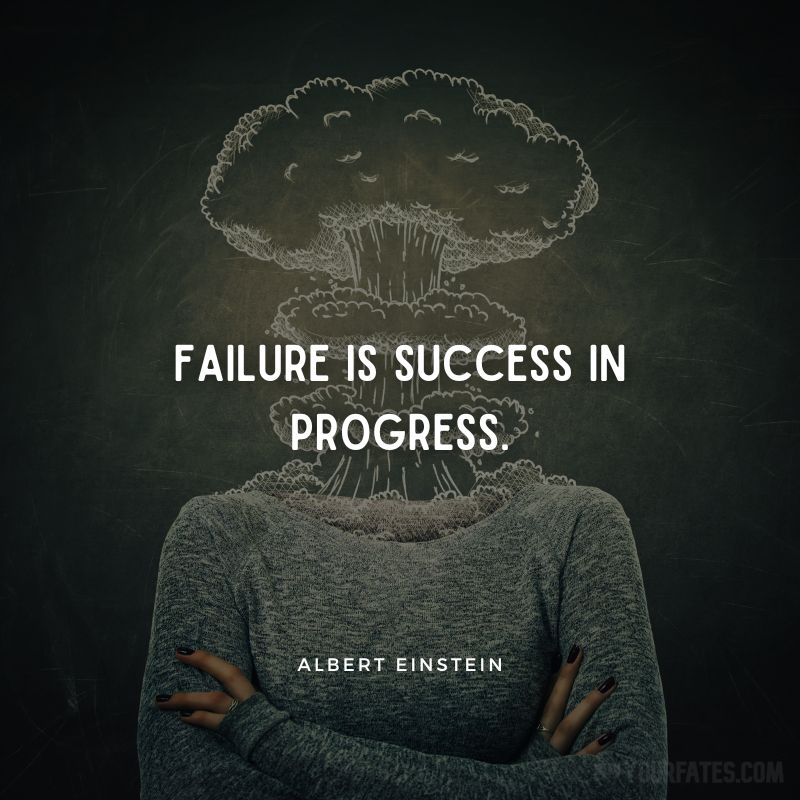 “Failure to prepare is preparing to fail.” – Mike Murdock

“If you set your goals ridiculously high and it’s a failure, you will fail above everyone else’s success.” – James Cameron

“Failure is another stepping stone to greatness.” – Oprah Winfrey

“Failure is good as long as it doesn’t become a habit.” – Michael Eisner

“Failure doesn’t mean you are a failure it just means you haven’t succeeded yet.” – Robert H. Schuller

“You may be disappointed if you fail, but you are doomed if you don’t try.” – Beverly Sills

“Success is most often achieved by those who don’t know that failure is inevitable.” – Coco Chanel

“It’s not how far you fall, but how high you bounce that counts.” – Zig Ziglar

“Failure is a part of the process. You just learn to pick yourself back up.” – Michelle Obama

“Everything you want is on the other side of fear.” – Jack Canfield

“There is no such thing as failure. Failure is just life trying to move us in another direction.” – Oprah

“You were not made for failure, you were made for victory. Go forward with a joyful confidence.” – George Eliot

“Failure will never overtake me if my determination to succeed is strong enough.” – Og Mandino

“Don’t bury your failures, let them inspire you.” – Robert Kiyosaki

“An essential aspect of creativity is not being afraid to fail.” – Edwin Land

“If you’re doing your best, you won’t have any time to worry about failure.” – H. Jackson Brown Jr. 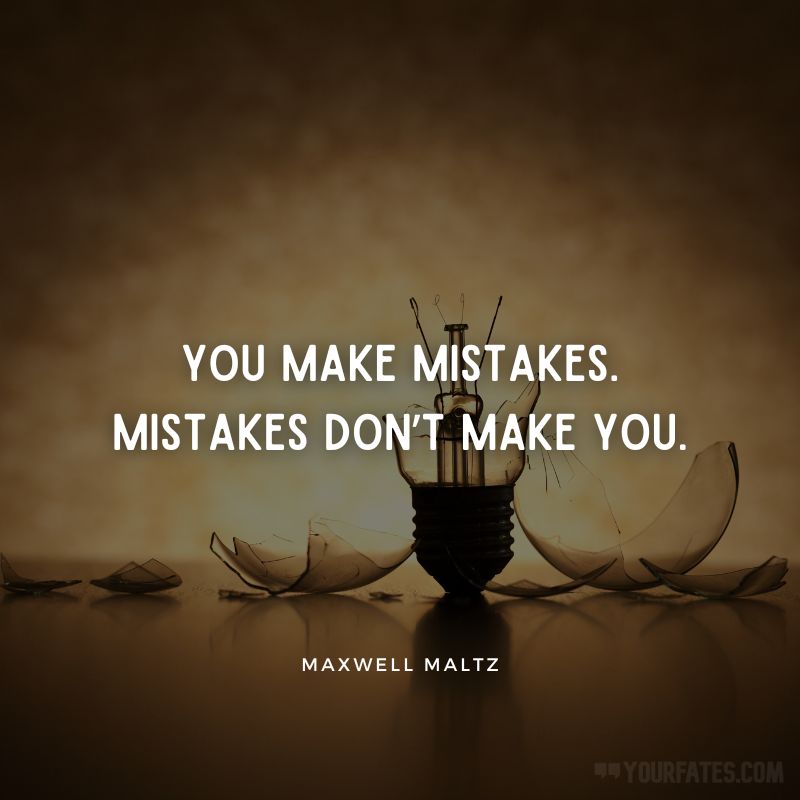 “Anyone who has never made a mistake has never tried anything new.” – Albert Einstein

“Sometimes by losing a battle you find a new way to win the war.” – Donald Trump

“There is only one thing that makes a dream impossible to achieve: the fear of failure.” – Paulo Coelho

“We’re born with success. It is only others who point out our failures, and what they attribute to us as failure.” – Whoopi Goldberg

“A man may fail many times but he isn’t a failure until he begins to blame somebody else.” – John Burroughs

“If you learn from defeat, you haven’t really lost.” -Zig Ziglar

“There is no thing as failure, only learning experiences.” – Anonymous

“It’s fine to celebrate success but it is more important to heed the lessons of failure.” – Bill Gates

“Our greatest glory is not in never failing, but in rising every time we fail.”– Confucius

“If you didn’t succeed, it’s just as important to keep in mind that there has never been a success story without failure and lessons along the way.” – Eric Christian

“Success consists of going from failure to failure without loss of enthusiasm.” – Winston Churchill

If you’re enjoying these quotes, you’ll love our collection of 100 Short Inspirational Quotes and Motivational Quotes

“Only those who dare to fail greatly can ever achieve greatly.” – Robert F. Kennedy

“An inventor fails 999 times, and if he succeeds once, he’s in. He treats his failures simply as practice shots.”– Charles F. Kettering

“Anyone who attempts is not a failure.” – Sarah Dessen

“The way most people fail is in not keeping up the heart.” – Lady Gregory

“I never fail. It’s just that the people around me succeed more than I.” – Carroll Bryant

“The difference between Success and failure is not giving up.” – Steven redhead

“Failure is when you talk yourself out of becoming something amazing.” – Rudy Francisco

“Don’t be afraid of missing opportunities. Behind every failure is an opportunity somebody wishes they had missed.” – Lily Tomlin

Sometimes the best gain is to lose.” – George Herbert

“Defeat is not the worst of failures. Not to have tried is the true failure.” – George Edward Woodberry

“Success is due to our stretching to the challenges of life. Failure comes when we shrink from them.” – John C. Maxwell

“Success is not final, failure is not fatal: it is the courage to continue that counts.” – Winston Churchill

“There is no innovation and creativity without failure. Period.” – Brene Brown

“Failure is nature’s plan to prepare you for great responsibilities.”– Napoleon Hill 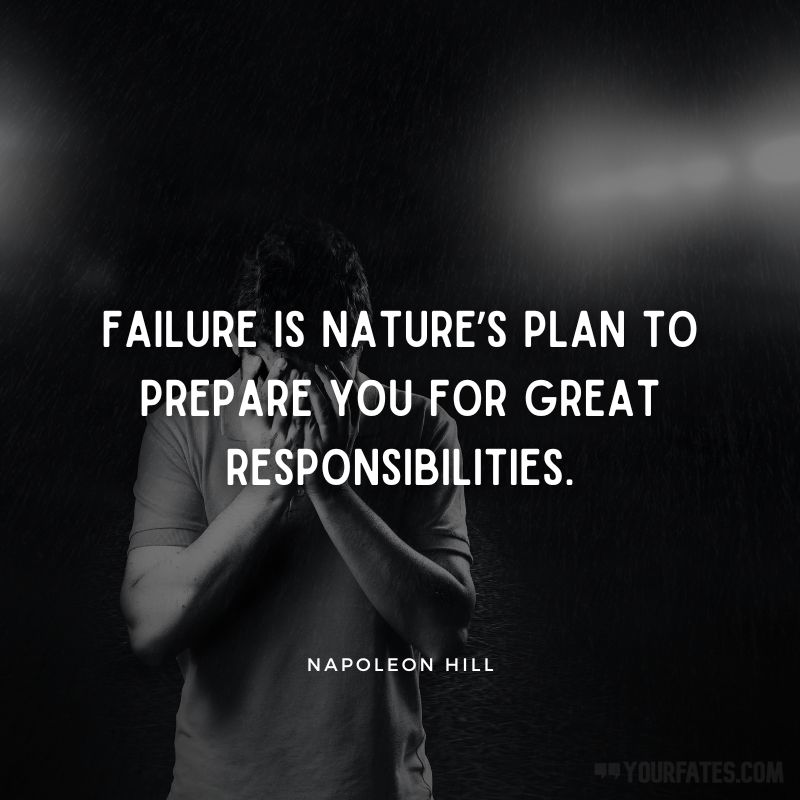 “Failures are finger posts on the road to achievement.”– C. S. Lewis

“Failure is the condiment that gives success its flavor.” – Truman Capote

“It’s failure that gives you the proper perspective on success.” – Ellen DeGeneres

“Do not judge me by my successes, judge me by how many times I fell down and got back up again.” – Nelson Mandela

“Every adversity, every failure, every heartache carries with it the seed of an equal or greater benefit.” – Napoleon Hill

“I can accept failure, everyone fails at something. But I can’t accept not trying.” -Michael Jordan

“Do not be embarrassed by your failures, learn from them and start again.”-  Richard Branson

“The greatest glory in living lies not in never falling, but in rising every time we fall.” -Ralph Waldo Emerson

“Many of life’s failures are people who did not realize how close they were to success when they gave up.” – Thomas A. Edison

“Success is measured by how high you bounce when you hit bottom” – George S. Patton 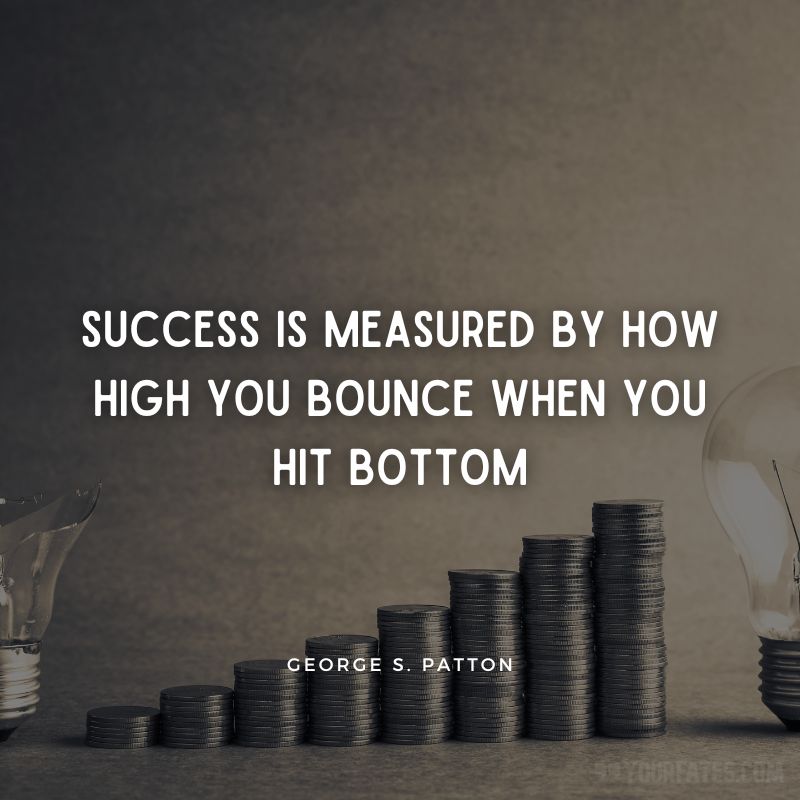 “When everything seems to be going against you remember that an airplane takes off against the wind, not with it.” – Henry Ford

“When setbacks arise – and they will from time to time – regroup, recharge, refocus and refine.” – Rasheed Ogunlaru

“It is hard to fail, but it is worse never to have tried to succeed.”- Theodore Roosevelt

“Honesty is the fastest way to prevent a mistake from turning into a failure.” – James Altucher

“Don’t fear failure. Not failure, but low aim, is the crime. In great attempts it is glorious even to fail.” – Bruce Lee

“Failure is an inescapable part of life and a critically important part of any successful life.” – Tal Ben-Shahar

“You always pass failure on your way to success.” – Mickey Rooney

“Ambition is the last refuge of the failure.” – Oscar Wilde

“Remember that failure is an event, not a person.” – Zig Ziglar

“When life knocks you down, try to land on your back. Because if you can look up, you can get up. Let your reason get you back up.” – Les Brown

“Everybody, at some point in their life, has fallen down and not felt like getting back up, but you have to, no matter how difficult it is.” – Charlie Hunnam

“When real people fall down in life, they get right back up and keep walking.” – Sarah Jessica Parker

“We need to accept that we won’t always make the right decisions, that we’ll screw up royally sometimes.” – Arianna Huffington

“The only real mistake is the one from which we learn nothing.” – Henry Ford

“Success is not a good teacher, failure makes you humble.” – Shah Rukh Khan

“I can’t give you a sure-fire formula for success, but I can give you a formula for failure: try to please everybody all the time.” – Herbert Bayard Swope

“I’ve failed over and over again in my life and that is why I succeed.” – Michael Jordan

“Failure is so important. We speak about success all the time. It is the ability to resist failure or use failure that often leads to greater success. I’ve met people who don’t want to try for fear of failing.” – J.K. Rowling

“Just because you fail once doesn’t mean you’re gonna fail at everything.” – Marilyn Monroe 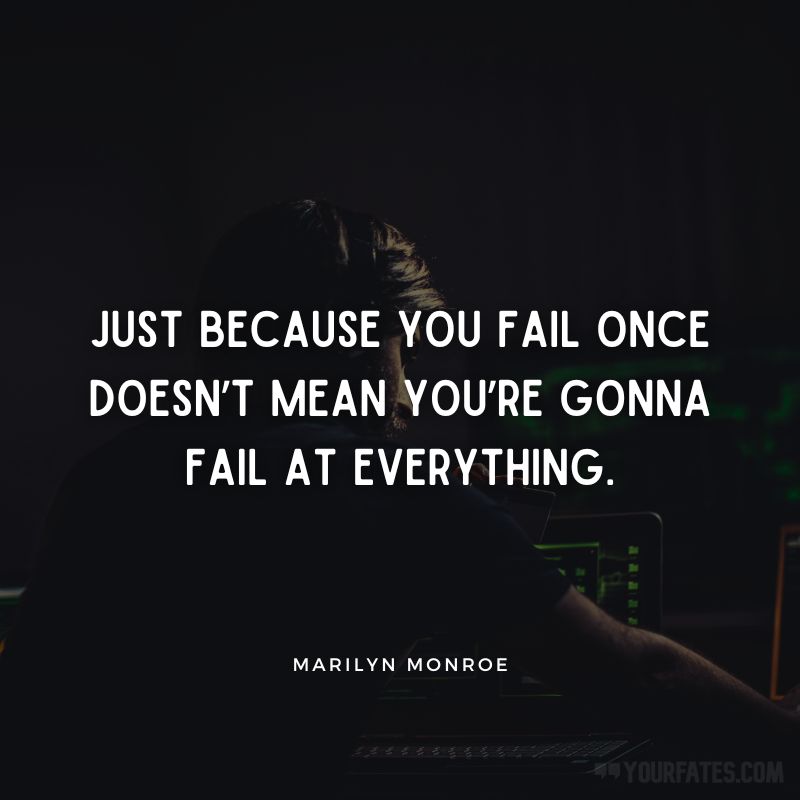 “Don’t live the same day over and over again and call that a life. Life is about evolving mentally, spiritually, and emotionally.” – Germany Kent

“You are right, I do fall down a lot. But that wouldn’t be true if I never stood back up.” – Richelle E. Goodrich

“Trust is the angels smiling when I’m crying because they see the other side of the world I haven’t come around to yet.” – Helen Edwards

Remember, diamond has to go through intense heating to shine. Similarly, if you overcome your failure, you will shine like a diamond.

We hope you have enjoyed these famous Failure Quotes by famous authors, philosophers and other personalities and get inspired. Also, If you’ve found us useful, please do consider telling your friends about it. All you have to do is send these quotes on WhatsApp and ask them to subscribe to us.