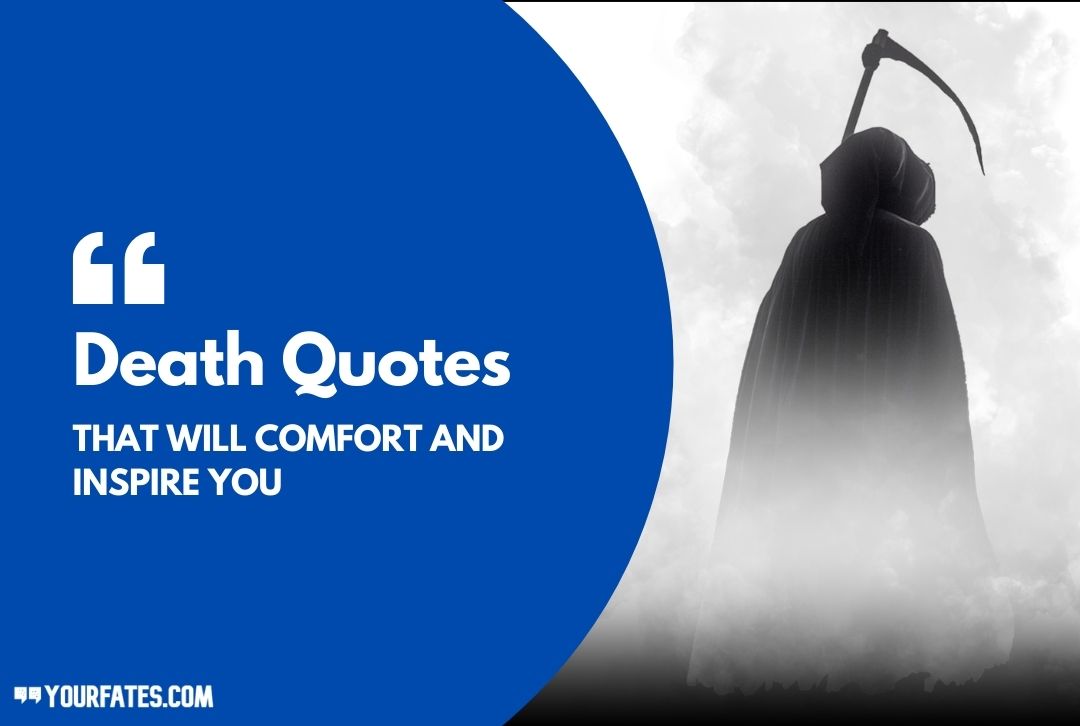 Like life is like a river, it is flowing, beautiful, and ongoing similarly death is like a mountain, huge, harsh, and true. It is just there in front of you, every moment of every day of your life, you just don’t know when you will have to deal with it. But no matter however hard it is to accept death, but the truth is that death is the only true destination of each and every one of us, and it signifies that no matter what or how we do in life, at the end, we are all destined for the same end and that is why, be humble. So here we have brought the best collection of Death Quotes and Sayings that will help you understand that you should never fear death as it is inevitable and at the end, everyone is going to meet at the other end of this world.

Great poets and writers have written about death. Reading them makes death seem poetic and beautiful where in reality it is just heartbreaking and tough. Maybe writers all around the world are doing us a favor by helping us in seeing death with a little bit of comfort.

So here are the best Death Quotes and Sayings that will help you see death from a different point. Maybe we just move from this world to some other when we die, who knows, enjoy life till you can: 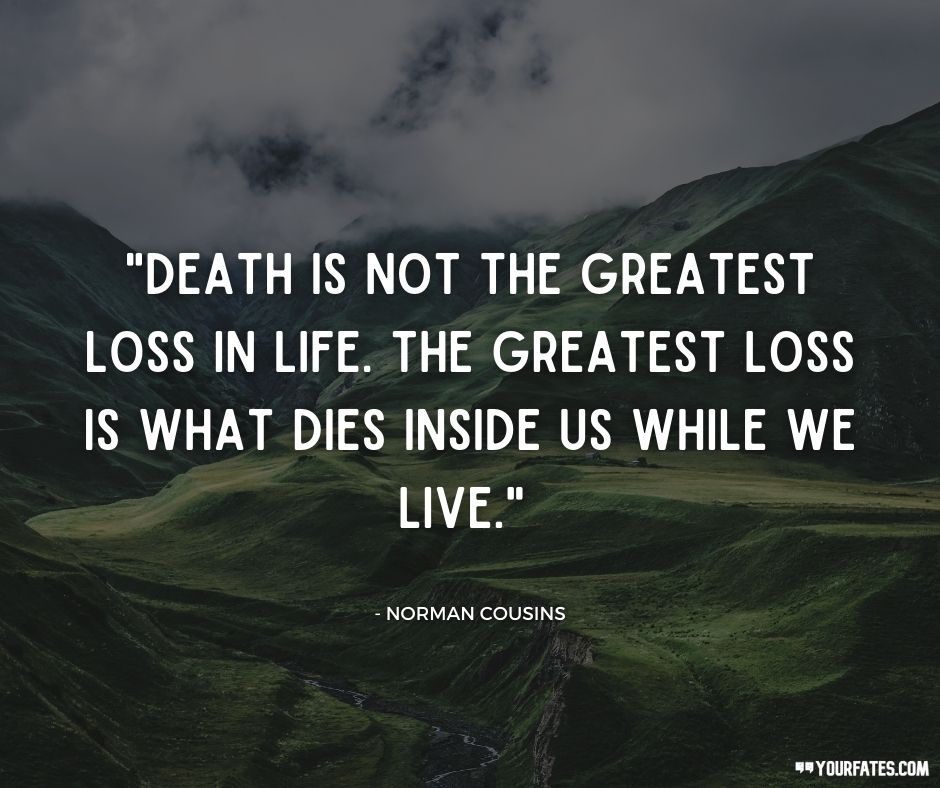 2. “Nothing is ever certain.” – Alice Sebold

5. “It is said that your life flashes before your eyes just before you die. That is true, it’s called life.” – Terry Pratchett

6. “To the well-organized mind, death is but the next great adventure.” – J.K. Rowling

7. “Every man’s life ends the same way. It is only the details of how he lived and how he died that distinguish one man from another.” – Ernest Hemingway

8. “I regret not death. I am going to meet my friends in another world.” – Ludovico Ariosto

9. “It is not death that a man should fear, but he should fear never beginning to live.” – Marcus Aurelius 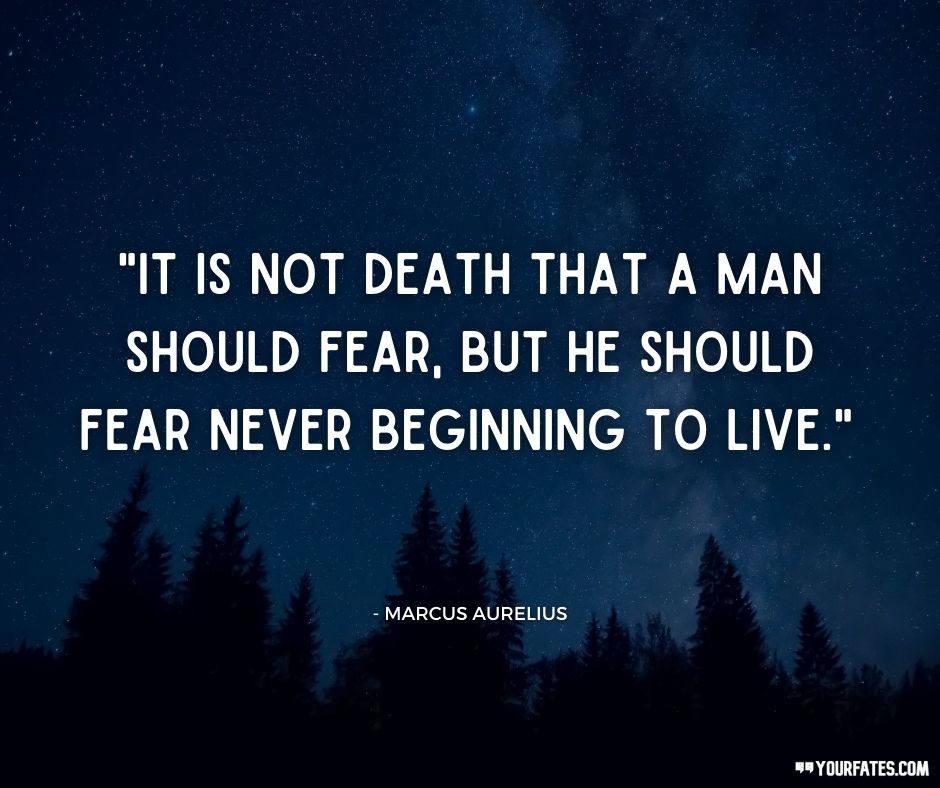 10. “Our dead are never dead to us, until we have forgotten them.” – George Eliot

11. “The funny thing about facing imminent death is that it really snaps everything else into perspective.” – James Patterson

13. “Live your life that the fear of death can never enter your heart.” – Tecumseh

14. “If you live each day as it was your last, someday you’ll most certainly be right.” – Steve Jobs

15. “They say you die twice. One time when you stop breathing and a second time, a bit later on, when somebody says your name for the last time.” – Banksy

16. “From my rotting body, flowers shall grow and I am in them, and that is eternity.” – Edvard Munch

17. “When it’s time to die, let us not discover that we have never lived.” – Henry David Thoreau 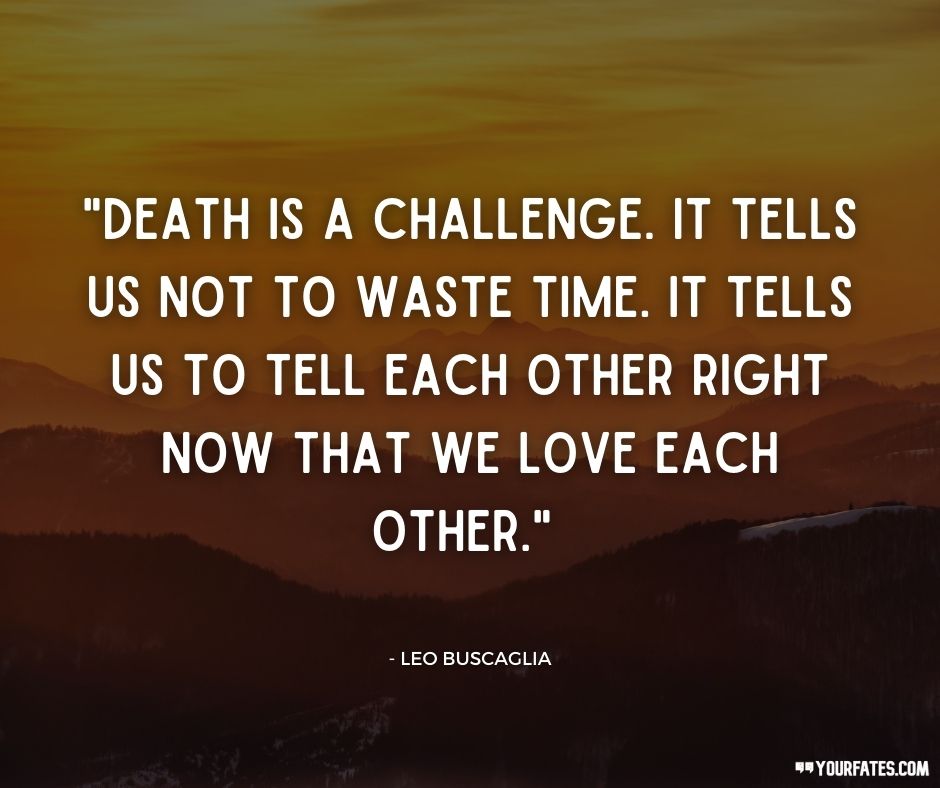 20. “You needn’t die happy when your time comes, but you must die satisfied, for you have lived your life from the beginning to the end.” – Stephen King

21. “To live in the hearts we leave behind is not to die.” – Thomas Campbell

23. “We all die. The goal isn’t to live forever, the goal is to create something that will.” – Chuck Palahniuk

24. “That it will never come again is what makes life so sweet.” – Emily Dickinson

26. “People living deeply have no fear of death.” – Anaïs Nin

27. “For life and death are one, even as the river and the sea are one.” – Kahlil Gibran

29. “No one is actually dead until the ripples they cause in the world die away.” – Terry Pratchett 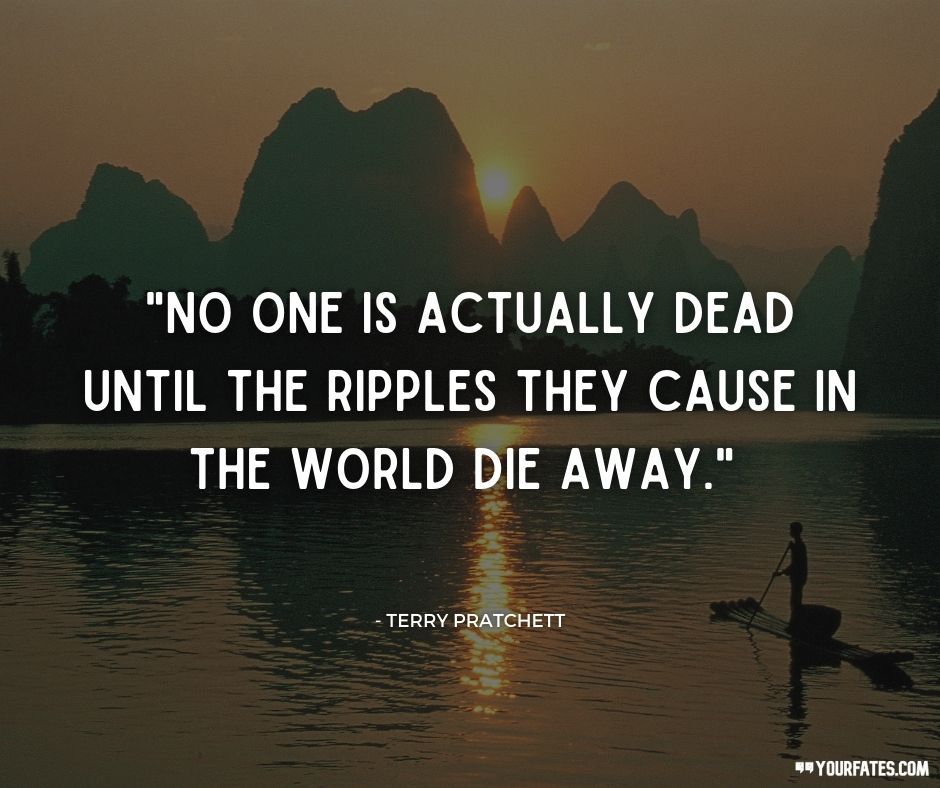 30. “Whatever you want to do, do it now. There are only so many tomorrows.” – Michael Landon

31. “Guilt is perhaps the most painful companion to death.” – Elisabeth Kubler-Ross

34. “What we have once enjoyed deeply we can never lose. All that we love deeply becomes a part of us.” – Helen Keller

36. “When he died, all things soft and beautiful and bright would be buried with him.” – Madeline Miller 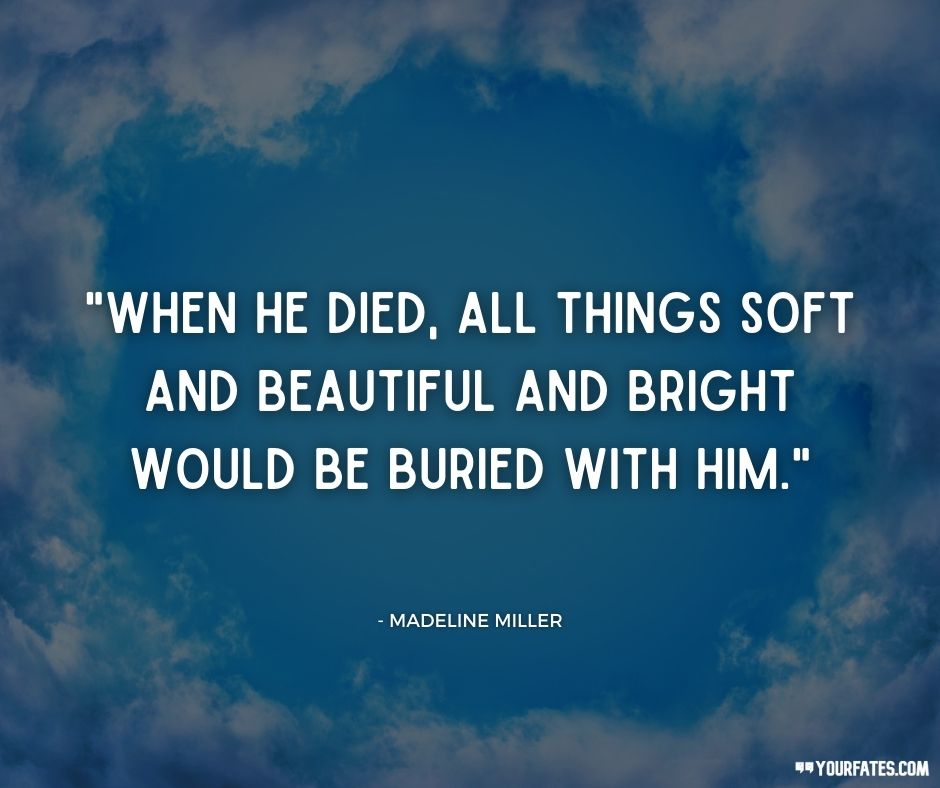 38. “Sadly enough, the most painful goodbyes are the ones that are left unsaid and never explained.” – Jonathan Harnisch

40. “For as long as the world spins and the earth is green with new wood, she will lie in this box and not in my arms. ” – Lurlene McDaniel

41. “If the people we love are stolen from us, the way to have them live on is to never stop loving them.” – James O’Barr

42. “When you are sorrowful look again in your heart, and you shall see that in truth you are weeping for that which has been your delight.” – Kahlil Gibran 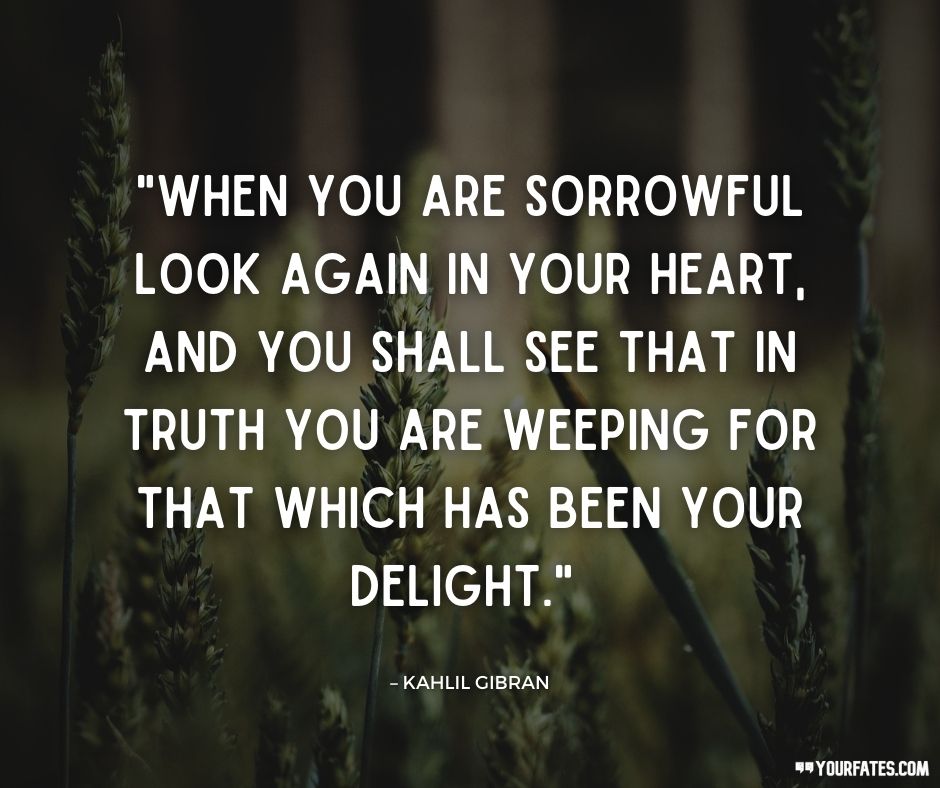 43. “Unable are the loved to die. For love is immortality.” – Emily Dickinson

44. “Perhaps they are not the stars, but rather openings in Heaven where the love of our lost ones pours through and shines down upon us to let us know they are happy.” –Unknown

45. “What is lovely never dies, but passes into other loveliness.” – Thomas Bailey

47. “One day your life will flash before your eyes. Make sure it’s worth watching.” – Unknown

48. “Some people are so afraid to die that they never begin to live.” – Henry van Dyke

50. “All men think that all men are mortal but themselves.” – Edward Young

51. “To fear death is to misunderstand life.” – Unknown

52. “If life must not be taken too seriously, then so neither must death” – Samuel Butler

53. “Death can come at any age, but the pride of life fools a person into thinking that day is far away.” – John Buttrick 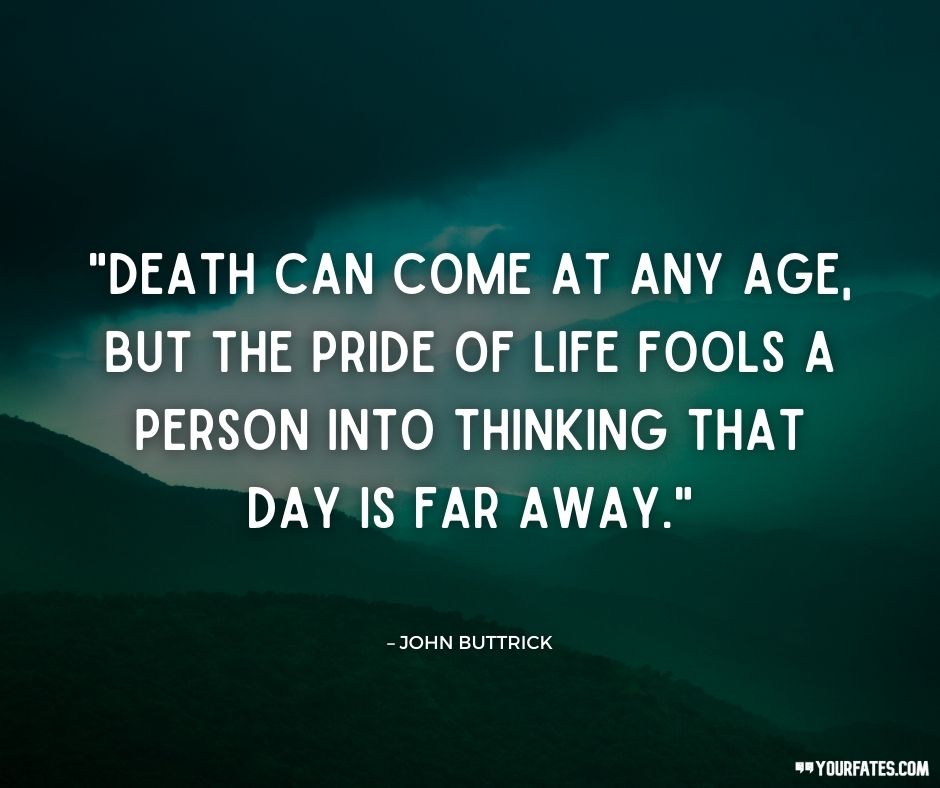 54. “None of us knows the day of our death. However, if we knew that death is actually our acquisition, we would remove the fear of death from our lives.” – Sunday Adelaja

55. “It is the secret of the world that all things subsist and do not die, but retire a little from sight and afterwards return again.” – Ralph Waldo Emerson

58. “If you ever lose someone dear to you, never say the words they’re gone. They’ll come back.” – Prince

59. “How can the dead be truly dead when they still live in the souls of those who are left behind?” – Carson McCullers

60. “We all die. The goal isn’t to live forever, the goal is to create something that will.” – Chuck Palahniuk

61. “I am prepared to meet my Maker. Whether my Maker is prepared for the great ordeal of meeting me is another matter.” – Winston Churchill

62. “Death is something inevitable. When a man has done what he considers to be his duty to his people and his country, he can rest in peace.” – Nelson Mandela

63. “Remembering that you are going to die is the best way I know to avoid the trap of thinking you have something to lose.” – Steve Jobs

65. “Death is not the end of life; it is the beginning of an eternal journey.” – Debasish Mridha

66. “Not only is death inevitable; death is necessary for us to inherit the new life we are to enjoy in Christ.” – Max Lucado

67. “Death is nothing else but going home to God, the bond of love will be unbroken for all eternity.” – Mother Teresa

69. “Death is only the end if you assume the story is about you” – Welcome to Night Vale

70. “The boundaries which divide Life from Death are at best shadowy and vague. Who shall say where the one ends, and the other begins?” – Edgar Allan Poe

71. “Death is nothing, but to live defeated and inglorious is to die daily.” – Napoleon Bonaparte 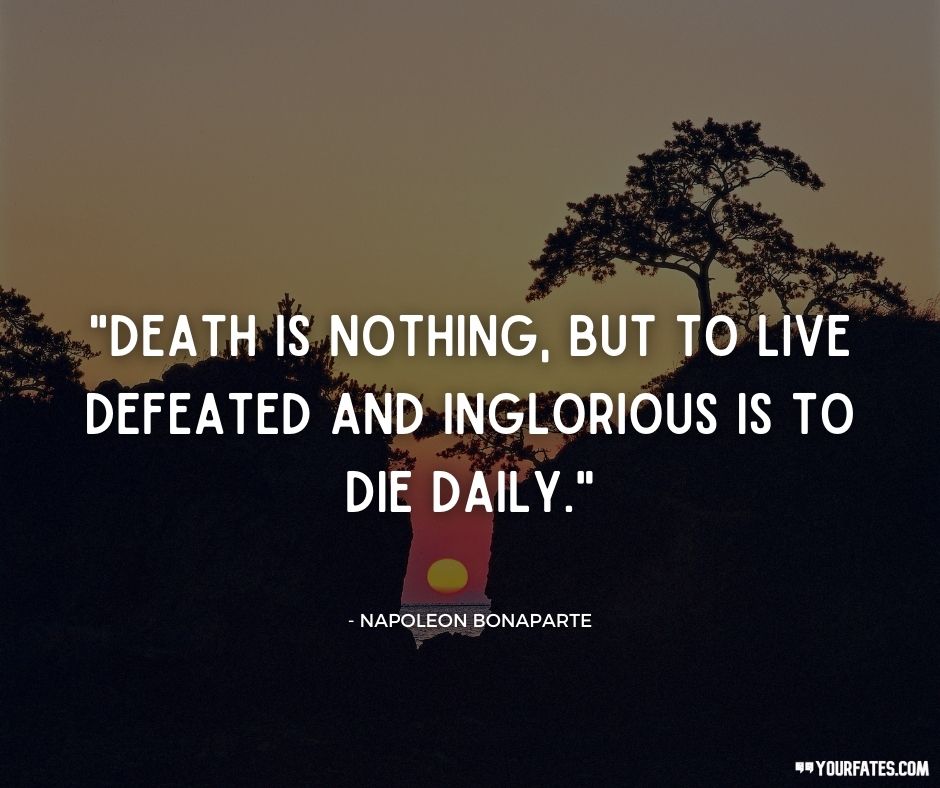 72. “Life is for the living. Death is for the dead. Let life be like music. And death a note unsaid.” – Langston Hughes

75. “The death of a friend is equivalent to the loss of a limb.” – German Proverb 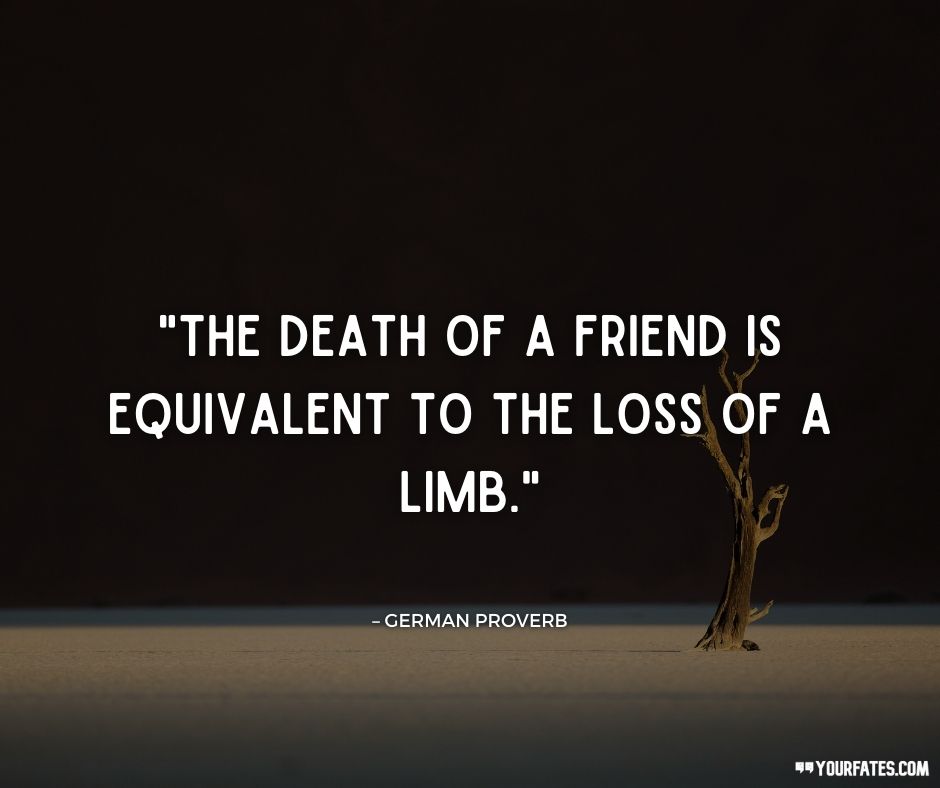 76. “Those we love never truly leave us, Harry. There are things that death cannot touch.” – Jack Thorne

77. “Even the best of friends cannot attend each other’s funeral.” – Kehlog Albran

78. “You cannot stop loving your friend because he’s dead, especially if he was better than anyone alive, you know?” – Jerome Salinger 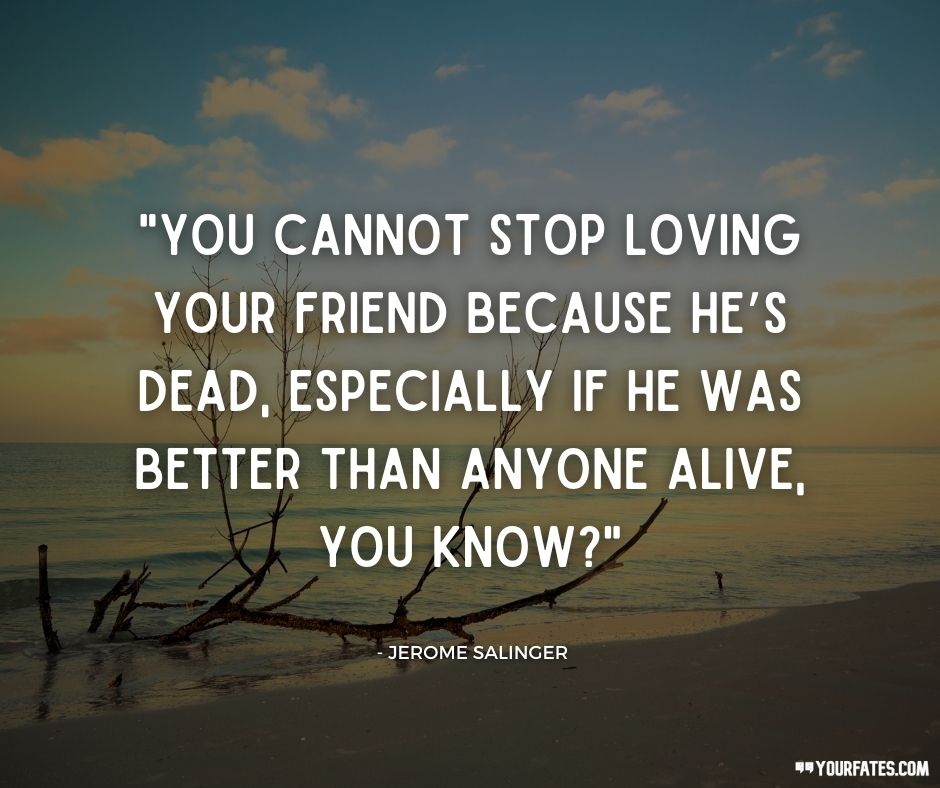 79. “When our friends are alive, we see the good qualities they lack; dead, we remember only those they possessed.” – Jean Antoine Petit-Senn

80. “But fate ordains that dearest friends must part.” – Edward Young

81. “This passion, and the death of a dear friend, would go near to make a man look sad.” – William Shakespeare

Life and death go hand in hand, death may seem tougher, but is life easy? Both have their share of secrets and we might just be the travelers who are supposed to unveil them. So keep living and keep unveiling.

We hope you like these collections of Death Quotes. Also, If you’ve found us useful, please do consider telling your friends about it. All you have to do is send these quotes on WhatsApp and ask them to subscribe to us.