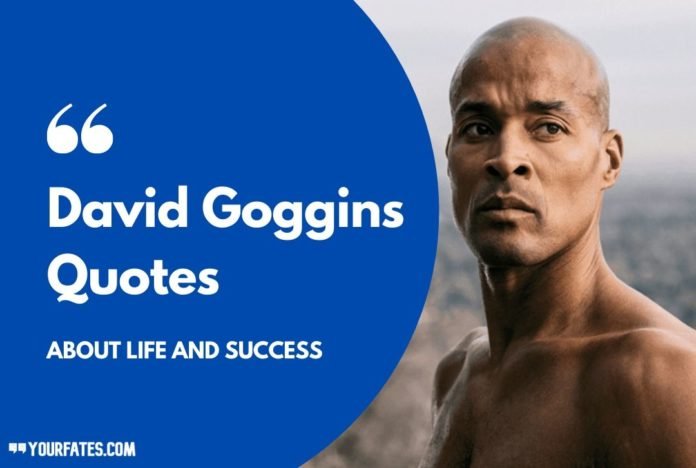 “When your mind is telling you that you’re done, that you’re exhausted, that you cannot possibly go any further, you’re only actually 40% done.” – David Goggins

Ultra marathon running, ultra-distance cycling and triathlon – David Goggins mastered everything. How about looking into the famous quotes by this famous marathon runner. We have brought you this amazing collection of David Goggins Quotes and Sayings that will shape your thoughts.

But before that let’s dive into the story of this man crossing the hardest hurdles in his life. David had a rough life. His parents got divorced when he was a child and his schoolmates used to bully him for his appearance. He wanted to join the AirForce but he was unable to join because of a disease he was suffering from. He went into depression after not getting selected in AirForce. He gained up to 135kg weight.

One random day, Goggins read about NAVY SEAL and he decided to join it. NAVY had a limit of 95kg weight. It is unbelievable but true that David Goggins lost 45kg in just 3 months. He went through intense gym training, cycling and running to lose weight. NAVY SEAL Training was another hard thing. Doctors advised David to not go through such intense training. But he never gave up. Even after all the illness, David passed the training with top rank.

David served in the United States NAVY SEAL team for five years. But the story doesn’t end here. David Goggins got into marathon running. He is an ultra-marathon runner, ultra-distance cyclist, and triathlete. He broke the Guinness World Record by doing 4030 pull-ups in just 17 hours. He is the author of the famous book ‘Can’t Hurt Me’. This book contains his own story that will inspire you to cross your limits.

Here’s the one for the hardest man alive in the world. Presenting you famous David Goggins Quotes and Sayings:

1. “My happiness is my reflection on the suffering during my journey and knowing that I never quit nor was I guided by anybody on this earth.” – David Goggins

2. “The only reason why I became successful was that I went towards the truth. As painful and as brutal as it is, it changed me. It allowed me, in my own right, to become the person who I am today.” – David Goggins

3. “No one is going to come to help you. No one’s coming to save you.” -David Goggins

5. “Everything in life is a mind game! Whenever we get swept under by life’s dramas, large and small, we are forgetting that no matter how bad the pain gets, no matter how harrowing the torture, all bad things end.” -David Goggins

6. “Greatness pulls mediocrity into the mud. Get out there and get after it.” -David Goggins

7. “It’s so easy to be great nowadays because everyone else is weak. If you have ANY mental toughness, if you have any fraction of self-discipline; The ability to not want to do it, but still do it; If you can get through to doing things that you hate to do: on the other side is GREATNESS ” – David Goggins

8. “We live in an external world. Everything, you have to see it, touch it. If you can for the rest of your life, live inside yourself – to find greatness, you have to go inside”. – David Goggins

9. “We all want to take this four-lane highway, but we always step over the shovel. All I did was pick up that shovel and made my own path.”

10. “The Buddha famously said that life is suffering. I’m not a Buddhist, but I know what he meant and so do you. To exist in this world, we must contend with humiliation, broken dreams, sadness, and loss.” -David Goggins

11. “Life is one big tug of war between mediocrity and trying to find your best self.” -David Goggins

13. “If you can get through doing things that you hate to do, on the other side is greatness.” – David Goggins

14. “It’s easier to accept the fact that you’re just not good enough. We all have a lot more than we think we have.” -David Goggins

15. “Life is a battle between trying to find more of yourself knowing that the real you is afraid, likes comfort, likes to be patted on the back, and doing what you need to do to get better.” -David Goggins

16. “Motivation is crap. Motivation comes and goes. When you’re driven, whatever is in front of you will get destroyed.” -David Goggins

17. “You will never learn from people if you always tap dance around the truth.” -David Goggins

18. “We like to live our lives on social media with lies about ourselves about how great we are. Get to the source! Fix the problem.” -David Goggins

19. “We are all great. No matter if you think you’re dumb, fat, been bullied, we all have greatness. You gotta find the courage. It’s going to be hard work, discipline, and non-cognitive skills – hard work, dedication, sacrifice – that will set you apart.” -David Goggins

20. “You will never learn from people if you always tap dance around the truth.” -David Goggins

22. “The most important conversation is the one you have with yourself.” -David Goggins

23. “You are stopping you, you are giving up instead of getting hard.” -David Goggins

24. “We’re either getting better or we’re getting worse.” -David Goggin

25. “Suffering is a test. That’s all it is. Suffering is the true test of life.” -David Goggins

26. “Most people who doubt you doubt you because they can never see themselves doing what you are trying to do.” – David Goggins

27. “Even if you are hurting, never let your competition see the look of defeat or even vulnerability on your face.” – David Goggins 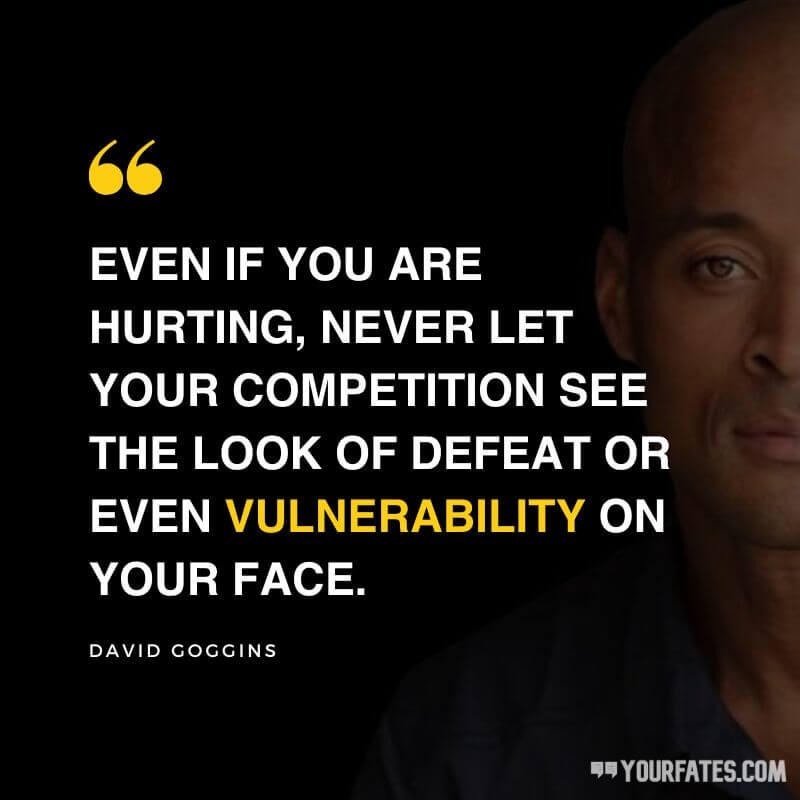 28. “If you’re not physically and mentally prepared for what life is going to throw at you, then you’re just going to crumble, And then, you’re no good to nobody.” -David Goggins

31. “When you fall down, focus on the solution, not the problem. You might quit or fail 100 times. Keep that clear picture of where you want to be.” – David Goggins

33. “I tried to do so many things to fit in. But when you look in the mirror, that’s the one person you can’t lie to.” – David Goggins

34. “You can will yourself to do almost anything you want.” – David Goggins 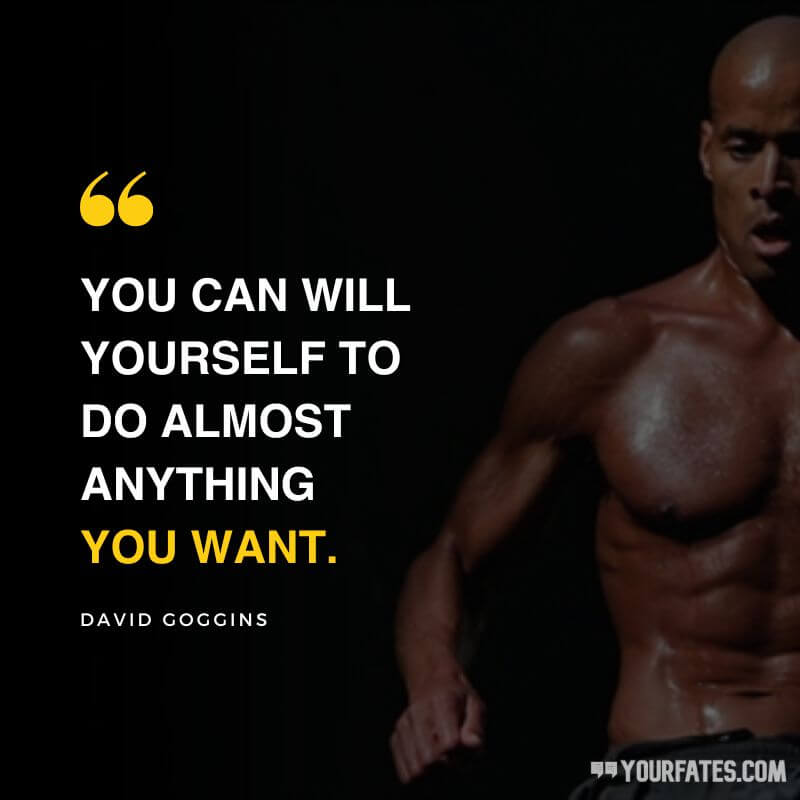 35. “The biggest thing is to stop thinking you deserve anything. You, me, or anyone else doesn’t deserve shit! So whenever you think you deserve a day off “just because”…rethink that shit! It’s that kind of attitude that makes you like most people.” – David Goggins

37. “The human body can withstand and accomplish a hell of a lot more than most of us think possible, and that it all begins and ends in the mind.” – David Goggins

39. “Having lived the life I’ve lived, and seeing the other side, not being afraid to attack what was in front of me has made me happy.” – David Goggins

40. “When you’re in hell, you forget how great you really are because you’re suffering and you forget the great things you’ve done.” – David Goggins

41. “Pain unlocks a secret doorway in the mind, one that leads to both peak performance, and beautiful silence.” – David Goggins 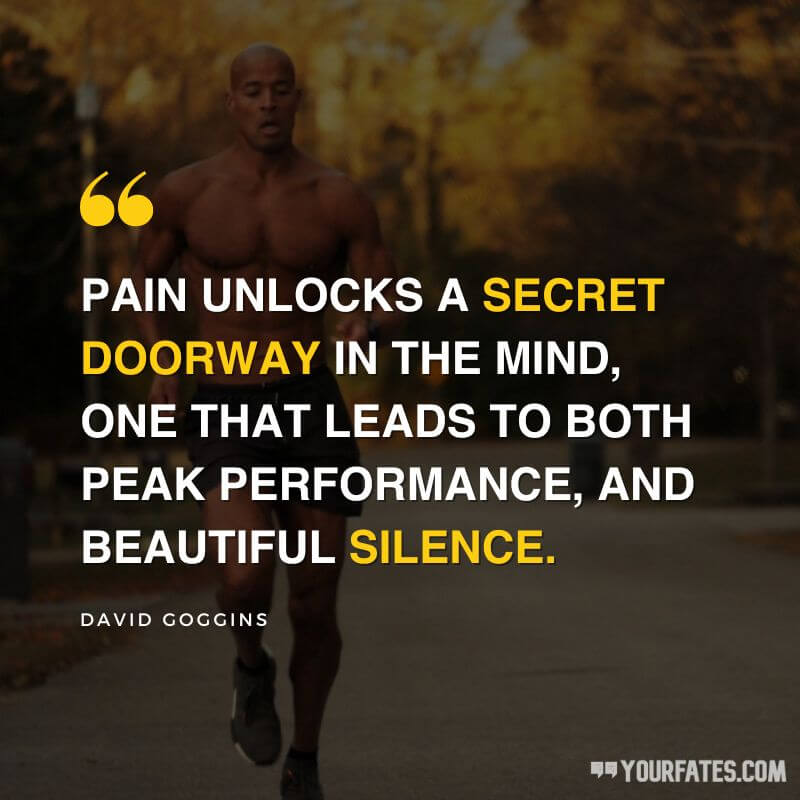 42. “Insanity is doing the same thing over and over again and expecting a different result.” – David Goggins

44. “There is no more time to waste. Hours and days evaporate like creeks in the desert. That’s why it’s okay to be cruel to yourself as long as you realize you’re doing it to become better.” – David Goggins

45. “Tell yourself the truth! That you’ve wasted enough time, and that you have other dreams that will take courage to realize…” – David Goggins

46. “You have to be willing to go to war with yourself and create a whole new identity.” – David Goggins

47. “Only you can master your mind, which is what it takes to live a bold life filled with accomplishments most people consider beyond their capability.” – David Goggins

48. “Everyone fails sometimes and life isn’t supposed to be fair, much less bend to your every whim.” – David Goggins

49. “Most people who are criticising and judging haven’t even tried what you failed at.” – David Goggins

50. “We habitually settle for less than our best; at work, in school, in our relationships, and on the playing field or racecourse.” – David Goggins

51. “In every failure a lot of good things will have happened, and we must acknowledge them.” – David Goggins

52. “It’s possible to transcend anything that doesn’t kill you.” – David Goggins

53. “Refused to compromise who I was to conform to their unwritten rules.” – David Goggins

54. “It’s a lot more than mind over matter. It takes relentless self discipline to schedule suffering into your day, every day.” – David Goggins

55. “The only way we can change is to be real with ourselves.” – David Goggins

Crossing the hardest hurdles of his illness, David Goggins has set an example that nothing is impossible if you are willing to do it. We hope you get inspired by these amazing David Goggins Quotes and Sayings.

We hope you like these collections of David Goggins Quotes. Also, If you’ve found us useful, please do consider telling your friends about it. All you have to do is send these quotes on WhatsApp and ask them to subscribe to us.