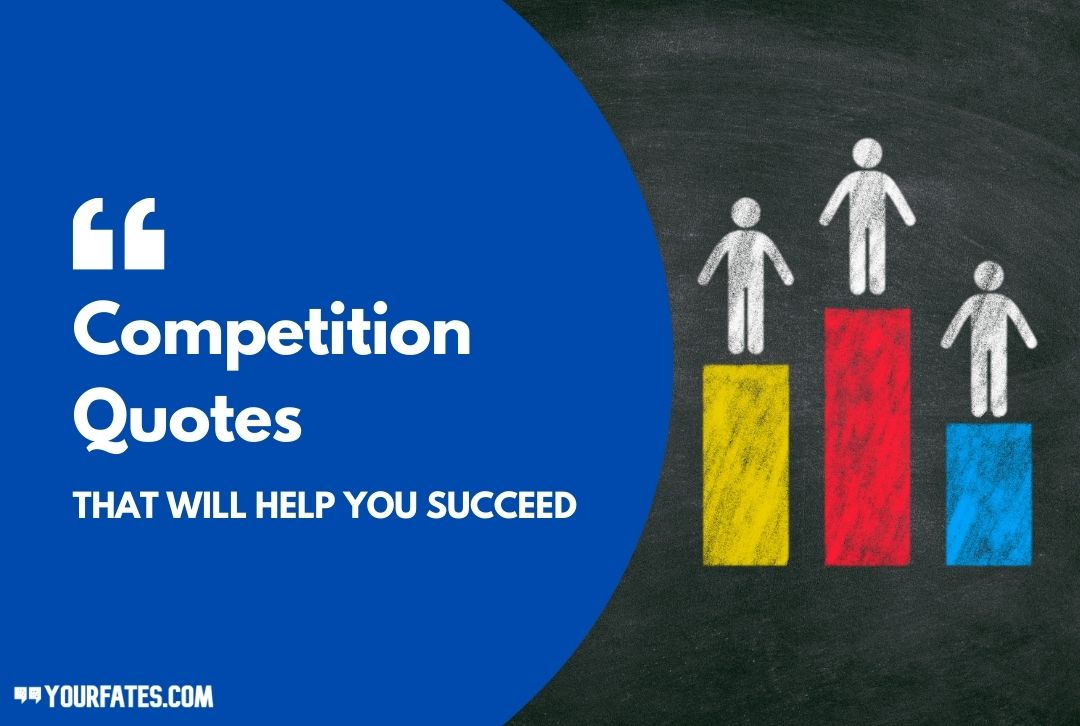 Hurdles in life can either push you to give up or inspire you to do better. The choice is yours, so always choose the latter one. Competitors are like such hurdles in life. When you are onto something, there is always someone better than you, there is always someone ahead of you. But that is what should become your strength, the will of doing greater than them. So today, to inspire you to outgrow everyone in life, specially yourself, we have brought these powerful Competition Quotes and Sayings for you that you can rely upon to take the competitors and the competition positively.

When life throws lemons at you, you will have to catch them first or else they will knock you off. And after catching them, it is upon you that what delicacy would you like to make with them, because let us be honest, lemons taste and smell great. So why waste them; make a great lemon tart and enjoy. Similarly, when a competitor appears in your life, who you think is better than you, face them with calmness, get some inspiration from them from the corner of the room, and slowly but steadily be as good as them or even better.

So here is this amazing collection of Competition Quotes and Sayings that will help the competition become the catalyst of your success:

1. “No competition, no progress.” – Bela Karolyi

2. “I am not in competition with anyone but myself. My goal is to improve myself continuously.” – Bill Gates

3. “The road to success and greatness is always paved with consistent hard work. Outwork your competitors, be authentic, and above all else, chase your greatness.” – Dwayne Johnson

4. “You have competition every day because you set such high standards for yourself that you have to go out every day and live up to that.” – Michael Jordan

5. “I have been up against tough competition all my life. I wouldn’t know how to get along without it.” – Walt Disney

6. “Competition exists to choose who gets the prize when the prize can’t be shared.” – Andrew Harvey

7. “In training, you listen to your body. In competition, you tell your body to shut up.” – Rich Froning Jr.

8. “Competition should not be for a share of the market-but to expand the market.” – W. Edwards Deming

9. “You might not be able to outthink, outmarket or outspend your competition, but you can outwork them.” – Lou Holtz

10. “Competition is always a fantastic thing, and the computer industry is intensely competitive.” – Bill Gates

11. “In a competition of love we’ll all share in the victory, no matter who comes first.” – Muhammad Ali

13. “It’s early in the morning and your competition is still sleeping.” – Greg Plitt

14. “Without the spur of competition we’d loaf out our life.” – Arnold Glasow

15. “A horse never runs so fast as when he has other horses to catch up and outpace.” – Ovid

16. “Live daringly, boldly, fearlessly. Taste the relish to be found in competition – in having put forth the best within you.” – Henry J. Kaiser

17. “The time your game is most vulnerable is when you’re ahead. Never let up.” – Rod Laver, Adidas

18. “If you’re not making mistakes, you’re not taking risks, and that means you’re not going anywhere. The key is to make mistakes faster than the competition, so you have more changes to learn and win.” – John W. Holt, Jr.

19. “The ability to learn faster than your competitors may be only sustainable competitive advantage.” – Arie de Geus, Shell Oil

21. “As soon as I hear the word ‘competition’ I get serious and start doing everything that I can do.” – Maureen McCormick

22. “The idea of competition, particularly in a creative atmosphere, is always there; if you don’t acknowledge that, you are doing yourself and the process a disservice.” – Jake Gyllenhaal

23. “Link to your competitors and say nice things about them. Remember, you’re part of an industry.” – Robert Scoble

24. “Without the spur of competition we’d loaf out our life.” – Arnold Glasow

25. “As humans, we have evolved to compete; it is in our genes, and we love to watch a competition.” – Peter Diamandis

27. “Taste the relish to be found in competition – in having put forth the best within you.” – Henry Kaiser

28. “Competition gives me energy. It keeps me focused.” – Conor McGregor

29. “You have competition every day because you set such high standards for yourself that you have to go out every day and live up to that.” – Michael Jordan

33. “I enjoy competition. I enjoy challenges. If a challenge is in front of me and it appeals to me, I will go ahead and conquer it.” – Conor McGregor

34. “Battle is the most magnificent competition in which a human being can indulge. It brings out all that is best; it removes all that is base.” – George Patton

37. “The most meaningful way to differentiate your company from your competition, is to do an outstanding job with information.” – Bill Gates

39. “Do not overestimate the competition and underestimate yourself. You are better than you think.” – Tim Ferriss

40. “Life is a kind of Chess, with struggle, competition, good and ill events.” – Benjamin Franklin

41. “So many times people are afraid of competition, when it should bring out the best in us. We all have talents and abilities, so why be intimidated by other people’s skills?” – Lou Holtz

43. “We achieve more when we chase the dream instead of the competition.” – Simon Sinek

45. “If you are insecure, guess what? The rest of the world is too. Do not overestimate the competition and underestimate yourself. You are better than you think.” – T. Harv Eker

46. “If you don’t have a competitive advantage, don’t compete.” – Jack Welch

47. “Competition can try to steal my plans and copy my style. But they can’t read my mind; so I’ll leave them a mile and a half behind.” – Ray Kroc

Top Quotes on Competition For Business

48. “In business, competition is never as healthy as total domination.” – Peter Lynch

49. “Move fast. Speed is one of your main advantages over large competitors.” – Sam Altman

50. “Whether it’s Google or Apple or free software, we’ve got some fantastic competitors and it keeps us on our toes.” – Bill Gates

51. “Get big quietly, so you don’t tip off potential competitors.” – Chris Dixon

52. “I looked at my competitors and I thought that, If they could do it, I could do it. And if they are popular and doing well, I could compete with them.” – Tommy Hilfiger

54. “My idea of a great business is one that has a shortage of competitors.” – Peter Lynch

56. “Competition whose motive is merely to compete, to drive some other fellow out, never carries very far. The competitor to be feared is one who never bothers about you at all, but goes on making his own business better all the time.” – Henry Ford

57. “World trade means competition from anywhere; advancing technology encourages cross-industry competition. Consequently, strategic planning must consider who our future competitors will be, not only who is here today.” – Eric Allison, Uber

58. “Competition is always a good thing. It forces us to do our best. A monopoly renders people complacent and satisfied with mediocrity.” – Nancy Pearcy, author

59. “There is a tendency among some businesses to criticize and belittle their competitors. This is a bad procedure. Praise them. Learn from them. There are times when you can co-operate with them to their advantage and to yours! Speak well of them and they will speak well of you. You can’t destroy good ideas. Take advantage of them.” – George Matthew Adams, columnist

60. “Make your product easier to buy than your competition, or you will find your customers buying from them, not you.” – Mark Cuban

What are some competitive Quotes?

1. "No competition, no progress." - Bela Karolyi
2. "Taste the relish to be found in competition -- in having put forth the best within you." - Henry Kaiser
3. "Competition is always a good thing. It forces us to do our best. A monopoly renders people complacent and satisfied with mediocrity." - Nancy Pearcy
4. "Without the spur of competition we'd loaf out our life." - Arnold Glasow
5. "The ability to learn faster than your competitors may be the only sustainable competitive advantage." - Arie de Geus
6. "Link to your competitors and say nice things about them. Remember, you're part of an industry." - Robert Scoble

The biggest competition in your life should be you yourself. Try to be better than the person you were yesterday, every day and you will be amazed at your growth. So keep growing and keep glowing.

We hope you like these collections of Competition Quotes. Also, If you’ve found us useful, please do consider telling your friends about it. All you have to do is send these quotes on WhatsApp and ask them to subscribe to us.