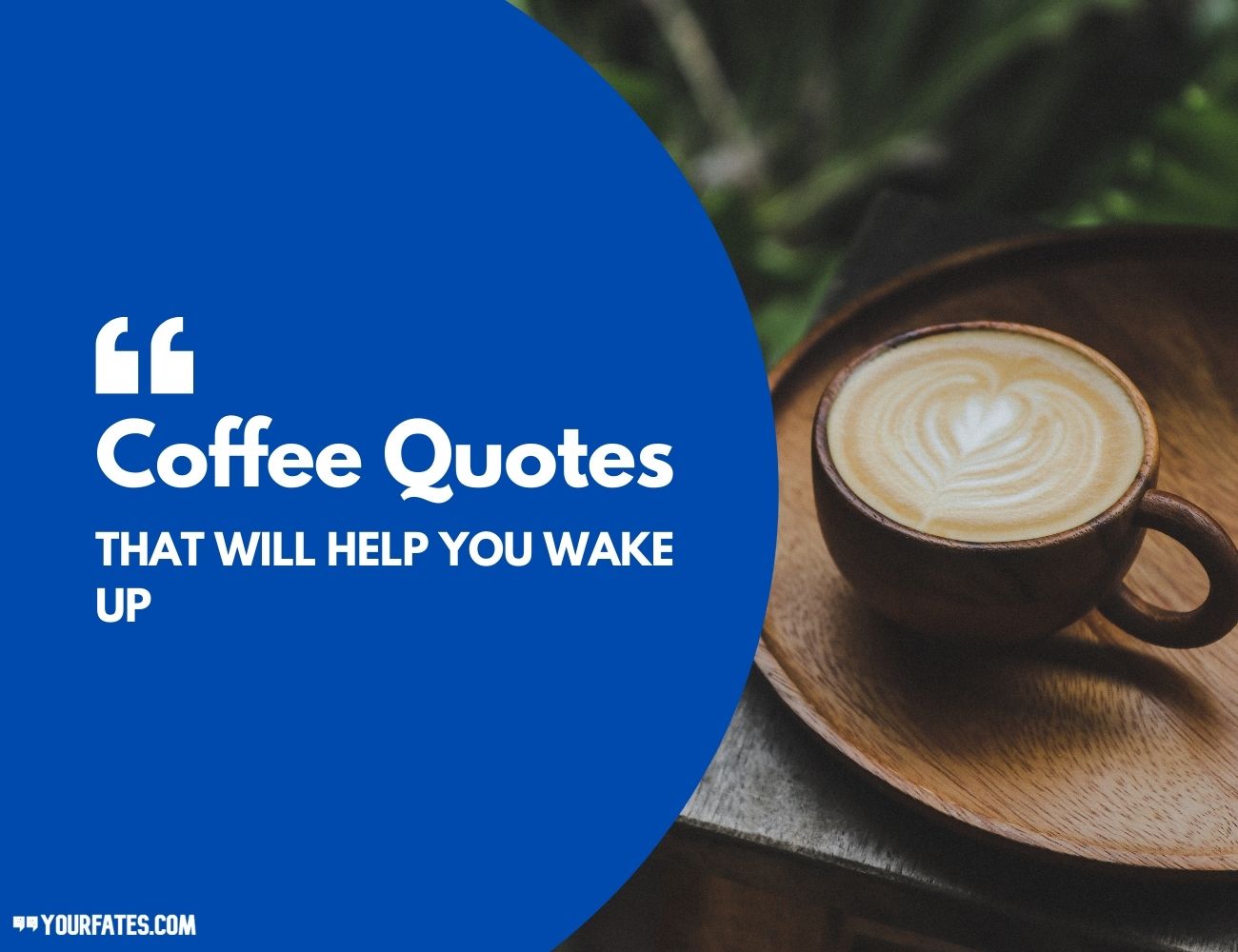 Just like everyone has their own cup of tea, people also have their cup of coffee. Some people like coffee, some people love coffee, and then there are people out there in this world that are literally surviving on espresso shots. It gives you the boost that makes you able to cut the crap supposedly and keeps your eyes open for a convenient period of time. So we have brought the best Coffee Quotes and Sayings that will open your eyes for the day.

Some of the classiest, booziest, and most expensive beverage and food places are the ones that serve coffee and some sort of carbs to accompany the coffee. And it is the most consumed beverage after water and tea. People, mostly the working group loves coffee on the go on the way to their office. So in short, coffee is not just keeping you awake so that you can make a living, it is also responsible for the direct employment of people working in the coffee chain from coffee fields to the coffee houses.

So here are the best Coffee Quotes and Sayings that will make you want to become a barista and serve coffee to yourself daily:

1. “The morning cup of coffee has an exhilaration about it which the cheering influence of the afternoon or evening cup of tea cannot be expected to reproduce.” – Oliver Wendell Holmes, Sr.

2. “I believe humans get a lot done, not because we’re smart, but because we have thumbs so we can make coffee.” -Flash Rosenberg

3. “It is inhumane, in my opinion, to force people who genuinely have a medical need for coffee to wait in line behind people who apparently view it as some kind of recreational activity.” -Dave Barry

4. “Coffee: the favorite drink of the civilized world.” -Thomas Jefferson

5. “As soon as coffee is in your stomach, there is a general commotion. Ideas begin to move…similes arise, the paper is covered. Coffee is your ally and writing ceases to be a struggle.” -Honore de Balzac

6. “Even bad coffee is better than no coffee at all.” -David Lynch 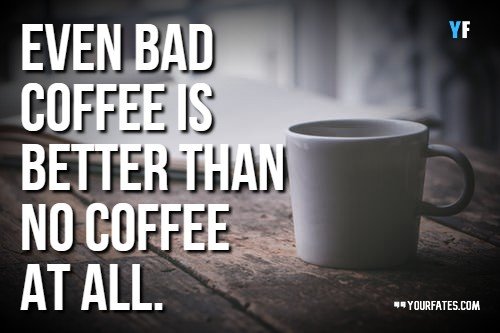 7. “The powers of a man’s mind are directly proportioned to the quantity of coffee he drinks.” – James Mackintosh 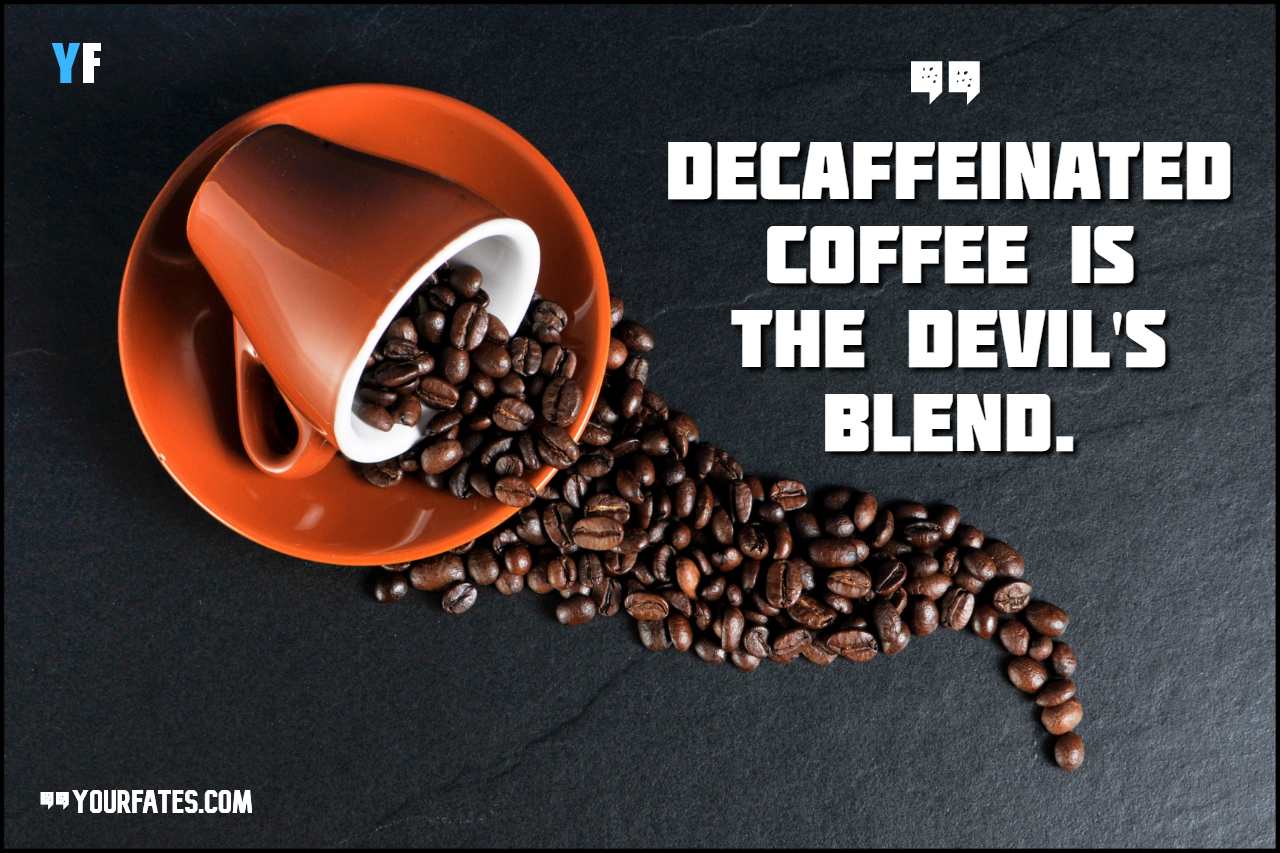 9. “We want to do a lot of stuff; we’re not in great shape. We didn’t get a good night’s sleep. We’re a little depressed. Coffee solves all these problems in one delightful little cup.” -Jerry Seinfeld

10. “Among the numerous luxuries of the table…coffee may be considered as one of the most valuable. It excites cheerfulness without intoxication; and the pleasing flow of spirits which it occasions…is never followed by sadness, languor or debility.” -Benjamin Franklin

11. “Coffee was only a way of stealing time that should by rights belong to your slightly older self.” -Terry Pratchett

12. “After all, coffee is bitter, a flavor from the forbidden and dangerous realm.”
-Diane Ackerman

15. “Once you wake up and smell the coffee, it’s hard to go back to sleep.” -Fran Drescher

16. “Coffee is the best thing to douse the sunrise with.” -Terri Guillemets

17. “There’s nothing sweeter than a cup of bitter coffee.” -Rian Aditia 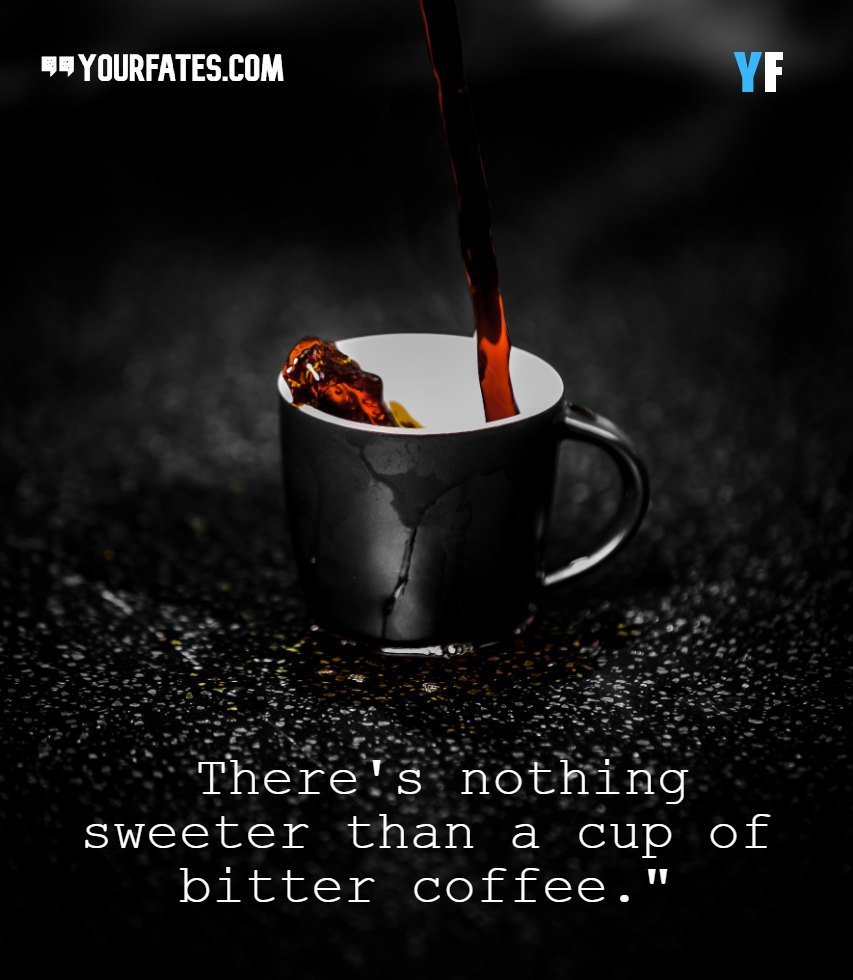 18. “As long as there was coffee in the world, how bad could things be?” -Cassandra Clare 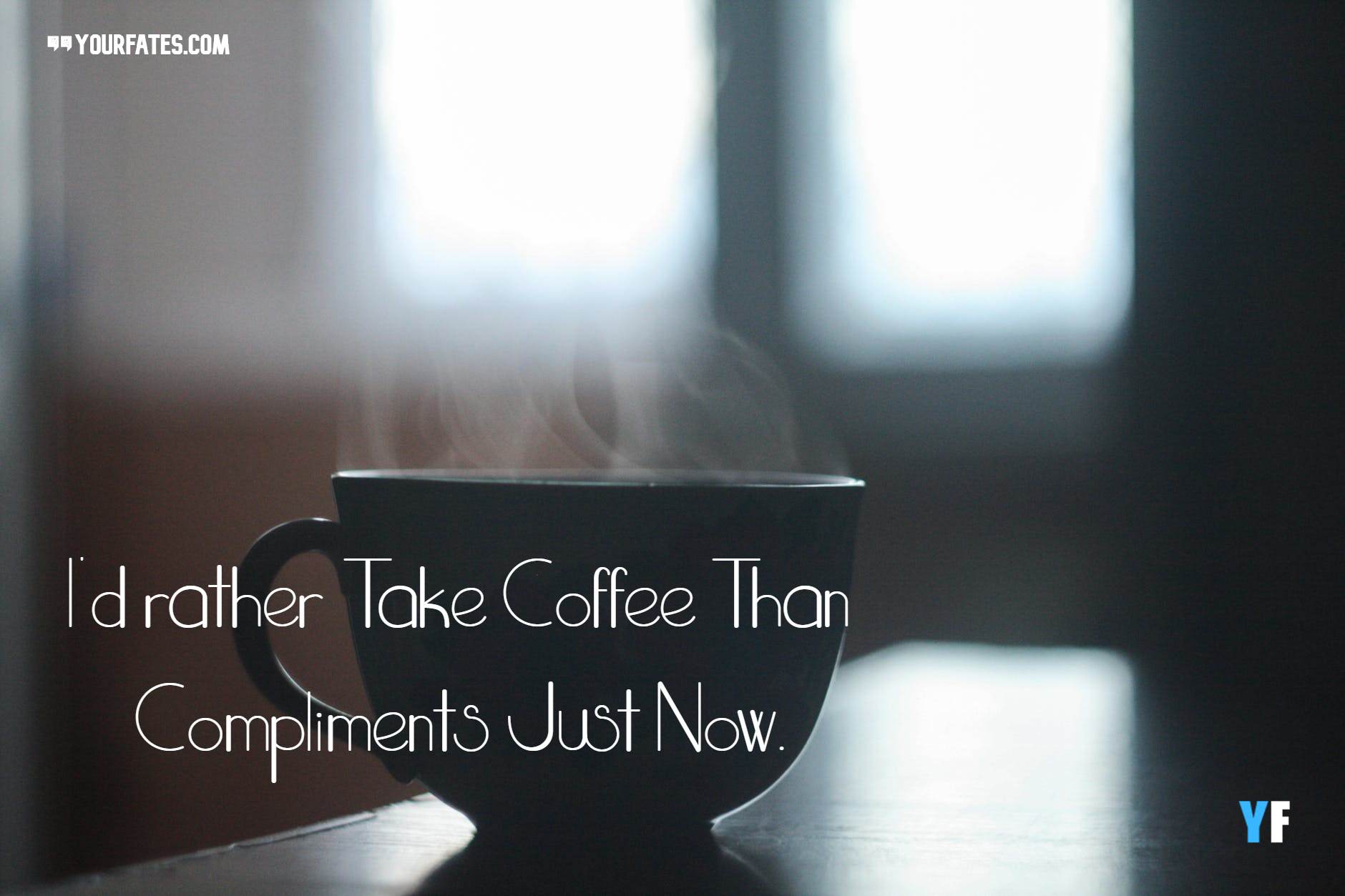 20. “To me, the smell of fresh-made coffee is one of the greatest inventions.” -Hugh Jackman

21. “Coffee and love are best when they are hot.” -German Proverb

22. “A cup of gourmet coffee shared with a friend is happiness tasted and time well spent.” -Unknown Author

23. This house runs on love, laughter and a whole lot of coffee.

26. Coffee is a beverage that puts one to sleep when not drank.

27. I have measured out my life with coffee spoons.

28. I never drink coffee at lunch. I find it keeps me awake for the afternoon.

29. A mathematician is a device for turning coffee into theorems. 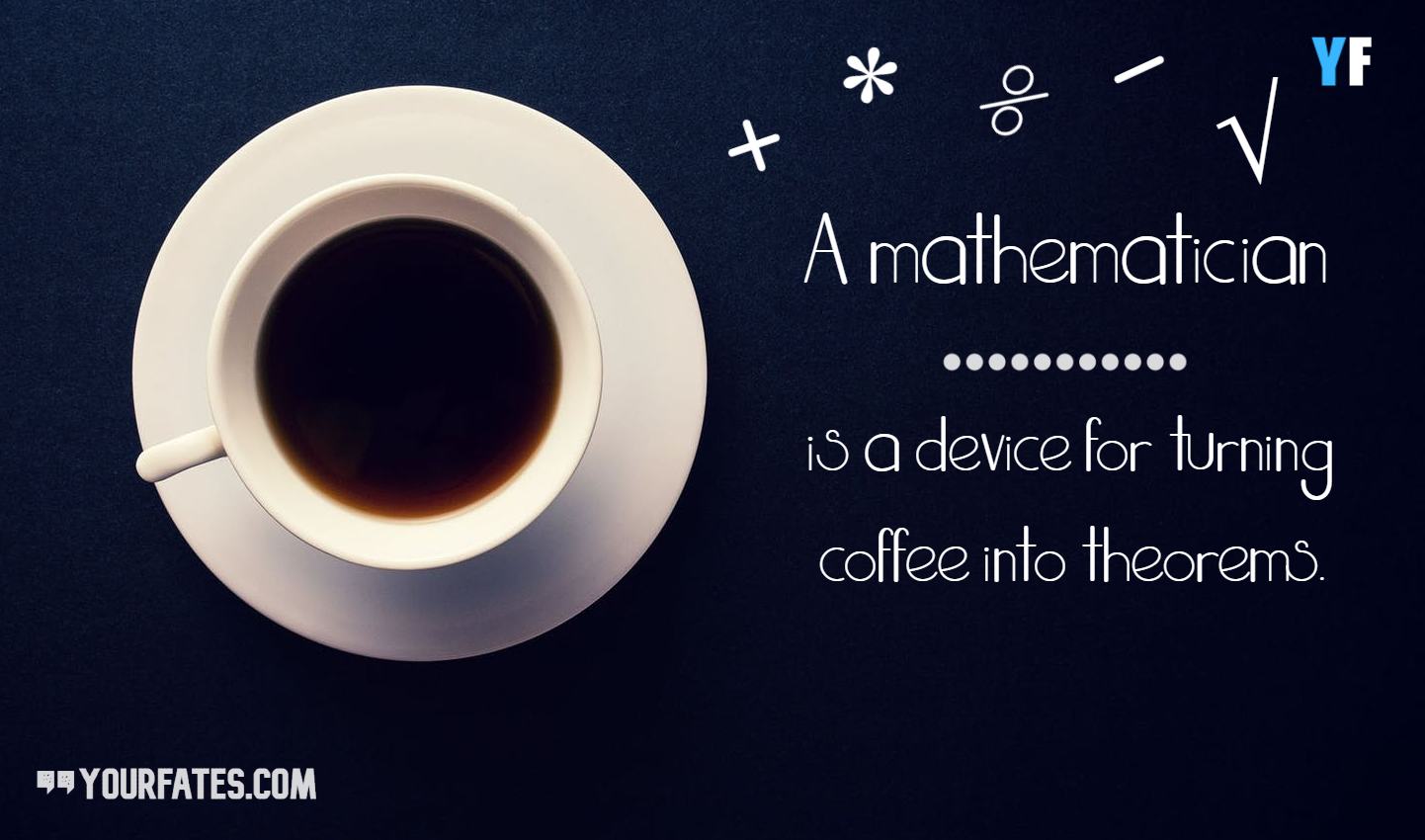 30. Coffee is a language in itself.

32. Good communication is as stimulating as black coffee, and just as hard.

35. I judge a restaurant by the bread and by the coffee.

37. When I wake up in the morning, I just can’t get started until I’ve had that first, piping hot pot of coffee. Oh, I’ve tried other enemas.

38. Townes van Zandt is the best songwriter in the whole world and I’ll stand on Bob Dylan’s coffee table in my cowboy boots and say that.

39. Kids are meeting in coffee shops and basements figuring out what’s unsustainable in their communities. That’s the future.

40. I put instant coffee in a microwave oven and almost went back in time.

41. May your coffee be stronger than your toddler.

42. It is the folly of too many to mistake the echo of a London coffee-house for the voice of the kingdom.

43. Coffee helps me maintain my “never killed anyone streak”

46. My birthstone is a coffee bean.

48. The most dangerous drinking game is seeing how long I can go without coffee. 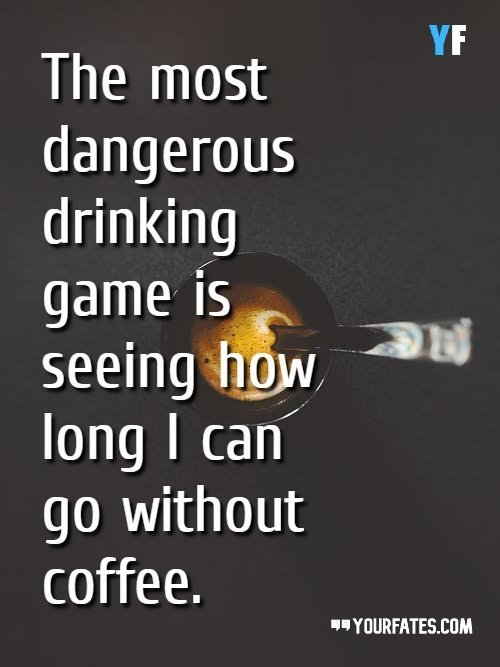 50. When life gives you lemons, trade them for coffee.

Everyone loves coffee. Here are some celebrity coffee quotes from some incredible individuals speaking on their love of coffee.

52. “Adventure in life is good; consistency in coffee even better.” – Justina Chen

54. “If it weren’t for the coffee, I’d have no identifiable personality whatsoever.” – David Letterman

56. “Even bad coffee is better than no coffee at all.” – David Lynch

57. “The powers of a man’s mind are directly proportioned to the quantity of coffee he drinks.” – Sir James Mackintosh 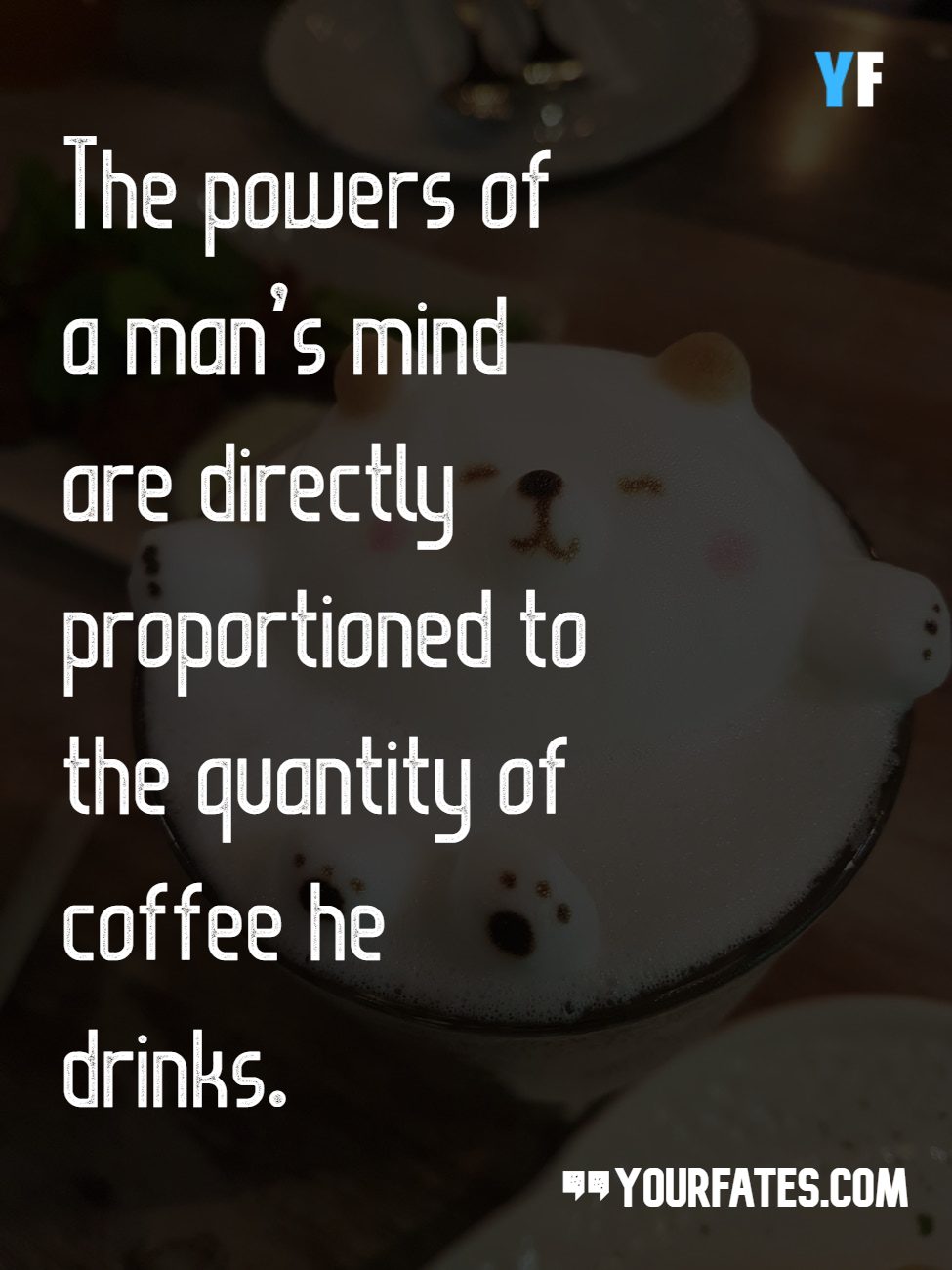 58. “I judge a restaurant by the bread and the coffee.” – Burt Lancaster

59. “Actually, this seems to be the basic need of the human heart in nearly every great crisis – a good hot cup of coffee.” – Alexander King

60. Love is in the air, and it smells like coffee.

61. Coffee with a friend is like capturing happiness in a cup.

62. You can’t buy happiness but you can buy coffee and that’s pretty close.

63. “Coffee, the favorite drink of the civilized world.” – Thomas Jefferson

65. “Everybody should believe in something. I believe I’ll have another coffee.”

66. “I believe humans get a lot done, not because we’re smart, but because we have thumbs so we can make coffee.” – Flash Rosenberg

67. “Coffee should be black as hell, strong as death and sweet as love.” – Turkish proverb 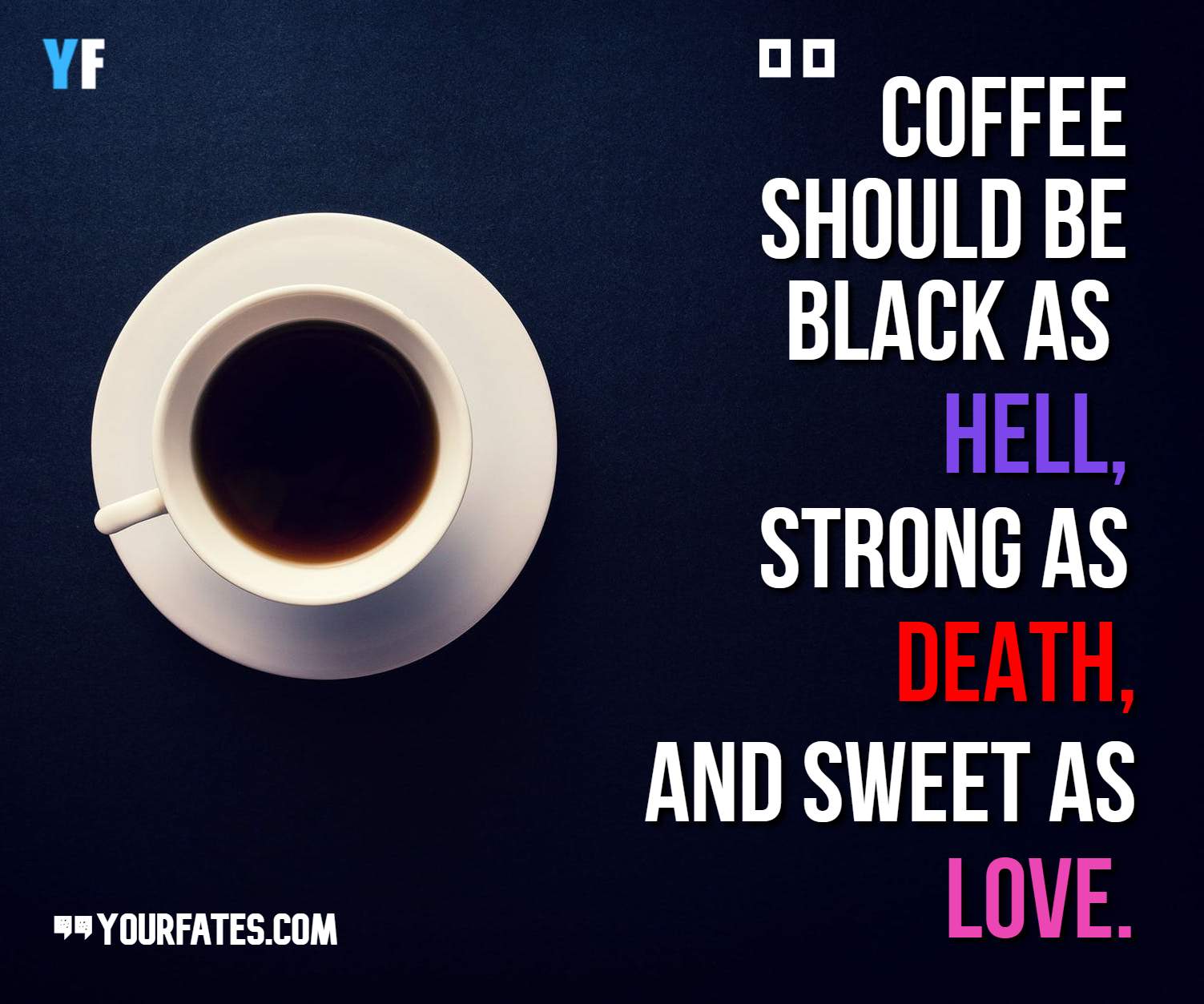 68. “I don’t know how people live without coffee, I really don’t.” – Martha Quinn

69. Three cups of coffee a day keeps the doctor away!

71. “Behind every successful woman is a substantial amount of coffee.” – Stephanie Piro

72. Coffee is the best medicine. 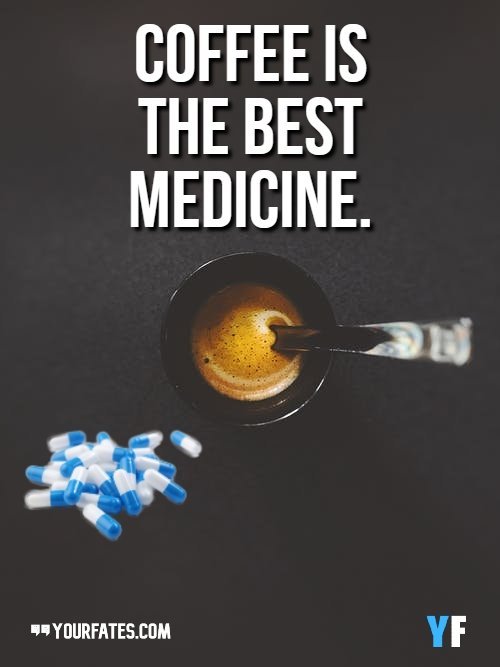 73. Coffee keeps me going until it’s time for wine.

74. “Coffee, It’s the lifeblood that fuels the dreams of champions!” – Mike Ditka

75. May your coffee be strong and your Monday is short. 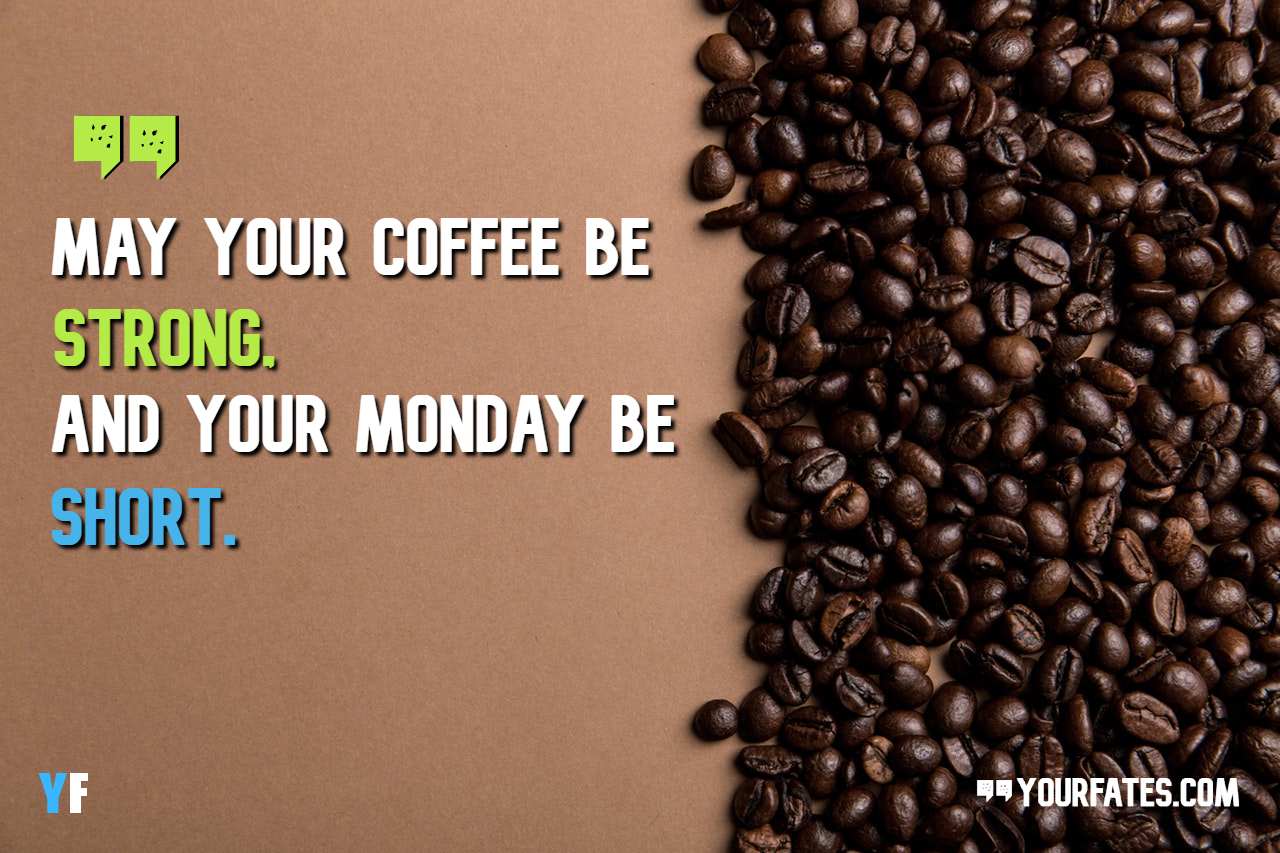 77. “What on earth could be more luxurious than a sofa, a book, and a cup of coffee?” -Anthony Trollope

78. “I was taken by the power that savoring a simple cup of coffee can have to connect people and create community.” – Howard Schultz

Hot coffee on a cold winter morning and cold coffee for a hot summer afternoon makes the world a better place to exist in. So grab your cup of coffee with a French toast and conquer the world with eyes wide open. Let the energy kick-in in the form of cappuccino, latte, brew, and the best of all, the filter coffee.

We hope you like these collections of Coffee Quotes. Also, If you’ve found us useful, please do consider telling your friends about it. All you have to do is send these quotes on WhatsApp and ask them to subscribe to us.