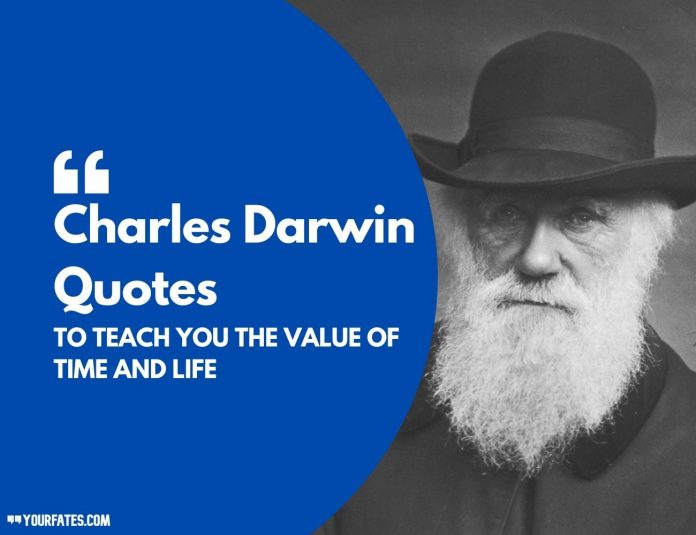 “A man who dares to waste one hour of time has not discovered the value of life.” – Charles Darwin

Parents will be awful when their kids ask where they have come from. They will manage them simply by saying “You came from mama’s stomach.” But where do we humans originate from? We heard people say, humans came from apes. Who presented the idea that our common ancestors are apes? Yes, Charles Darwin. Class 10 biology, will always have his theory of evolution in the syllabus. Hope you could recollect now. Charles Darwin Quotes mostly will be of life, nature, and species around us.

Charles Darwin was a naturalist and geologist. His father was a doctor and his mother was a physician. He was pushed into Edinburgh Medical School to pursue his doctorate under the pressure of his father. His lack of interest in medicine led his father to enroll him to attain a B.A degree. He chose his mainstream interest in botany and got distinction.  Darwin spent his five years discovering the species around the world in HMS Beagle, a naval survey ship. He was there to collect the animals and birds specimens from the countries and islands. Visiting Galapagos Islands changed his entire life and gave him a purpose.  After returning to his place, he started to study different species collected around the world in detail.

He found that finches around the world are the same but birds from different islands had different species. He began to study many animals and birds and came up with the theory of natural selection. His theory was rejected when he was alive. But today it is accepted and his theory became the basis for genetics. He has received awards like the Copley medal, Royal medal, and many.

Today we have come up with the legend Charles Darwin Quotes which will conspire and inspire you covering various topics like life, education, time, change.

1. “Man, wonderful man, must collapse, into nature‘s cauldron, he is no deity, he is no exception.” – Charles Darwin

2. “The mystery of the beginning of all things is insoluble by us; and I for one must be content to remain an agnostic.” – Charles Darwin

3. “We must, however, acknowledge, as it seems to me, that man with all his noble qualities… still bears in his bodily frame the indelible stamp of his lowly origin.” – Charles Darwin

4. “A fair result can be obtained only by fully stating and balancing the facts and arguments on both sides of each question.” – Charles Darwin 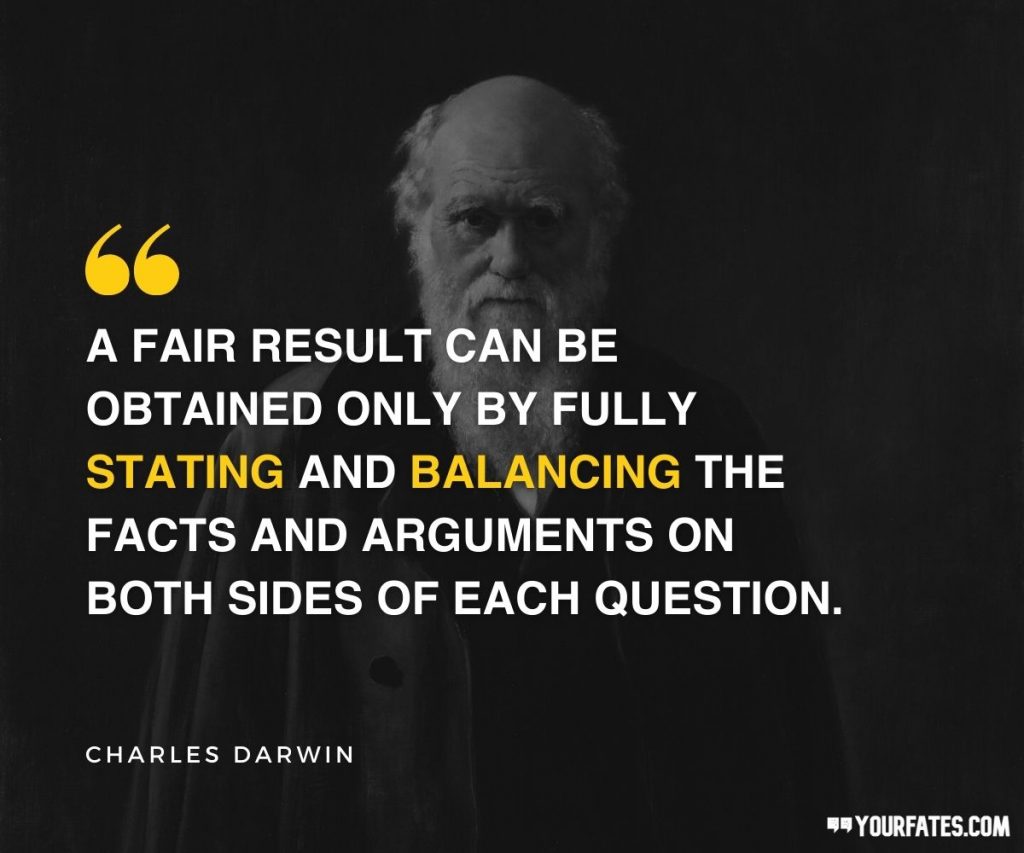 5. “Blushing is the most peculiar and most human of all expressions.” – Charles Darwin

6. “False facts are highly injurious to the progress of science, for they often endure long; but false views, if supported by some evidence, do little harm, for every one takes a salutary pleasure in proving their falseness.” – Charles Darwin

7. “Besides love and sympathy, animals exhibit other qualities connected with the social instincts which in us would be called moral.” – Charles Darwin

8. “Even people who aren’t geniuses can outthink the rest of mankind if they develop certain thinking habits.” – Charles Darwin 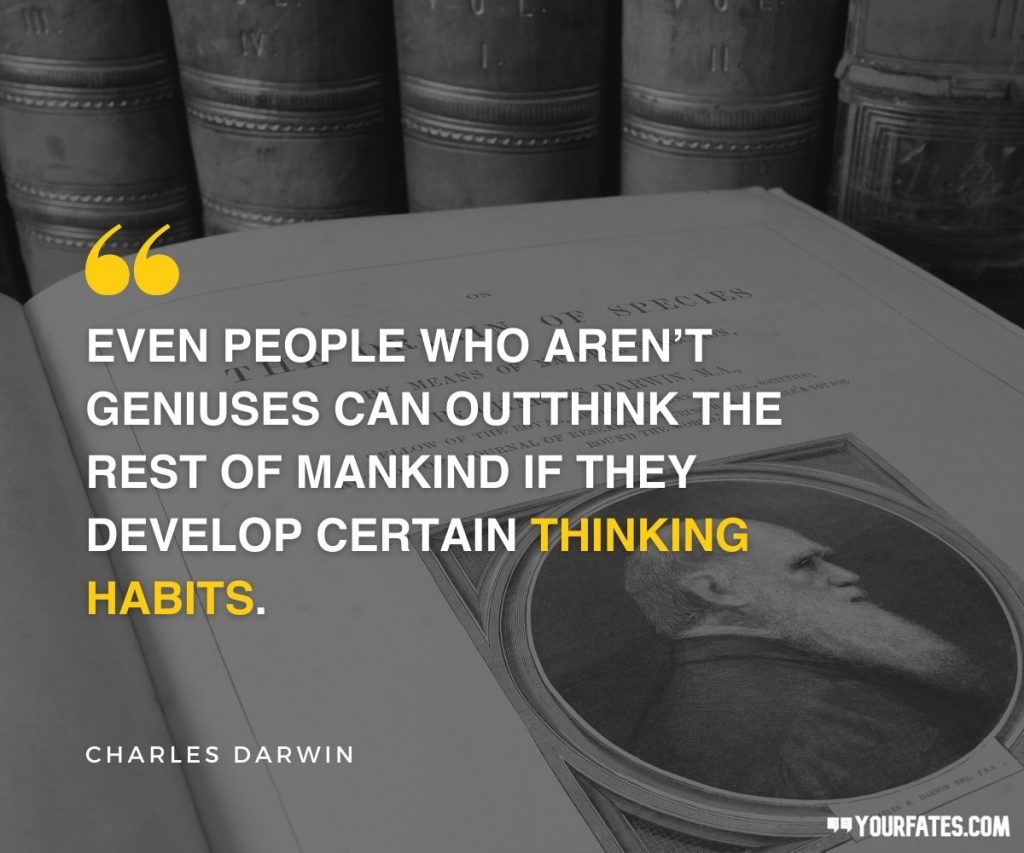 9. “The more one thinks, the more one feels the hopeless immensity of man’s ignorance.” – Charles Darwin

10. “Freedom of thought is best promoted by the gradual illumination of men’s minds which follows from the advance of science.” – Charles Darwin

11. “We stopped looking for monsters under our bed when we realized that they were inside us.” – Charles Darwin

12. “The power to charm the female has sometimes been more important than the power to conquer other males in battle.” – Charles Darwin 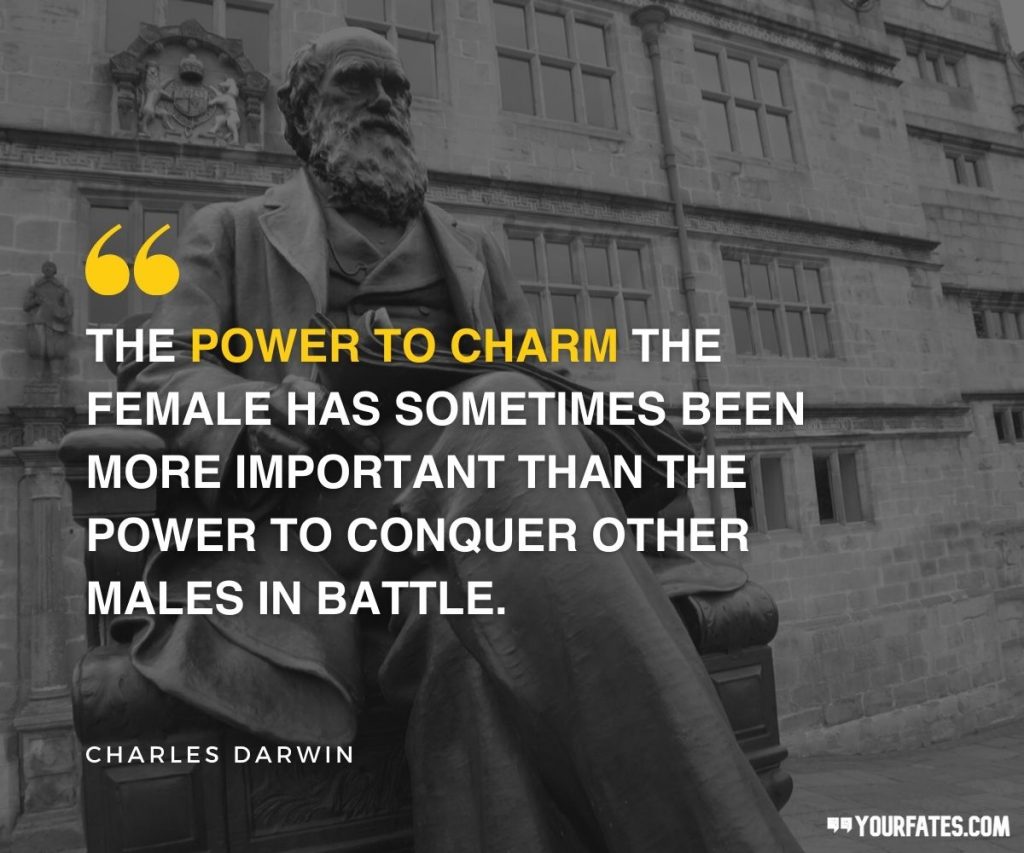 13. “A scientific man ought to have no wishes, no affections, – a mere heart of stone.” – Charles Darwin

14. “The very essence of instinct is that it’s followed independently of reason.” – Charles Darwin

15. “Ignorance more frequently begets confidence than does knowledge: it is those who know little, not those who know much, who so positively assert that this or that problem will never be solved by science.” – Charles Darwin

16. “If the misery of the poor be caused not by the laws of nature, but by our institutions, great is our sin.” – Charles Darwin 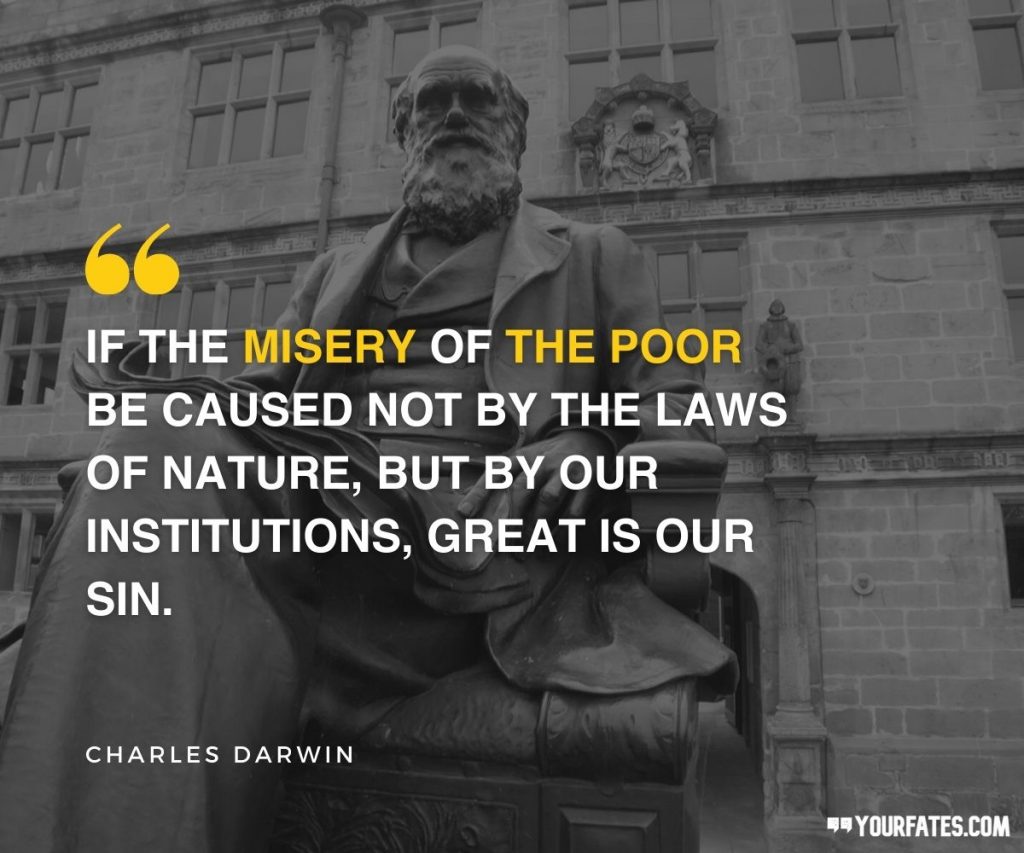 17. “A republic cannot succeed, till it contains a certain body of men imbued with the principles of justice and honour.” – Charles Darwin

18. “One general law, leading to the advancement of all organic beings, namely, multiply, vary, let the strongest live and the weakest die.” – Charles Darwin

19. “The love for all living creatures is the most noble attribute of man.” – Charles Darwin

20. “I am turned into a sort of machine for observing facts and grinding out conclusions.” – Charles Darwin

21. “An American monkey, after getting drunk on brandy, would never touch it again, and thus is much wiser than most men.” – Charles Darwin

22. “Man tends to increase at a greater rate than his means of subsistence.” – Charles Darwin 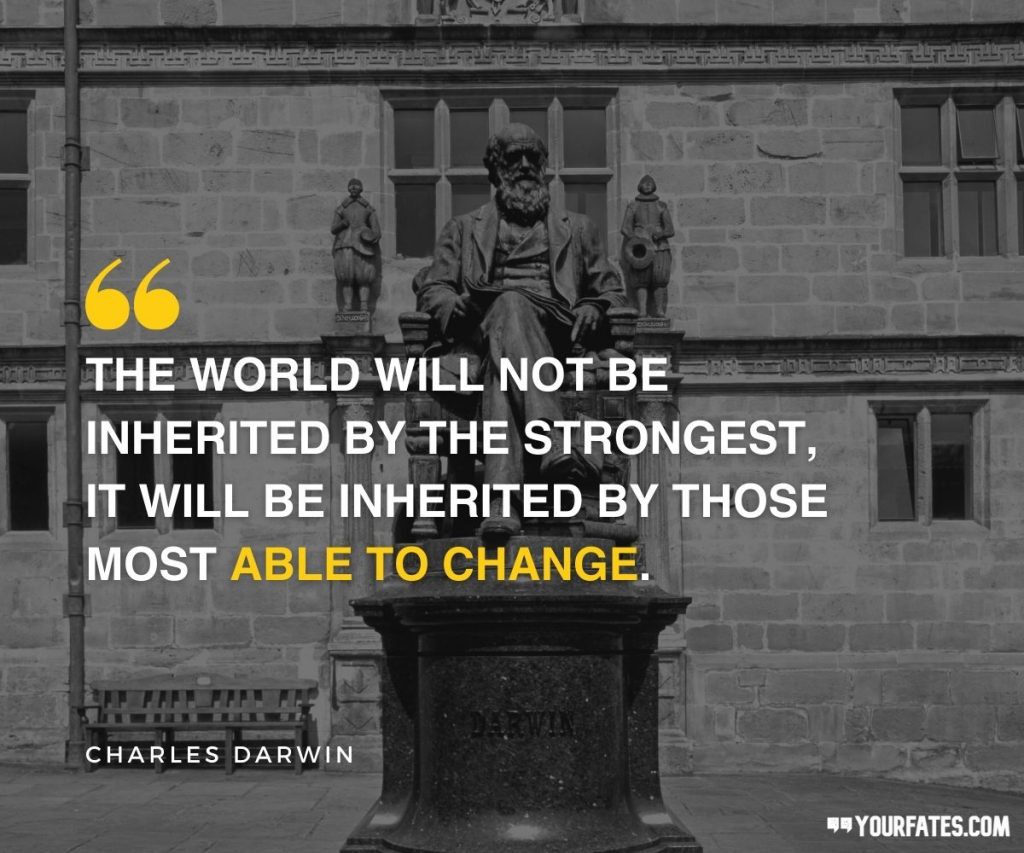 24. “To kill an error is as good a service as, and sometimes even better than, the establishing of a new truth or fact.” – Charles Darwin

25. “In the struggle for survival, the fittest win out at the expense of their rivals because they succeed in adapting themselves best to their environment.” – Charles Darwin

26. “In conclusion, it appears that nothing can be more improving to a young naturalist, than a journey in distant countries.” – Charles Darwin 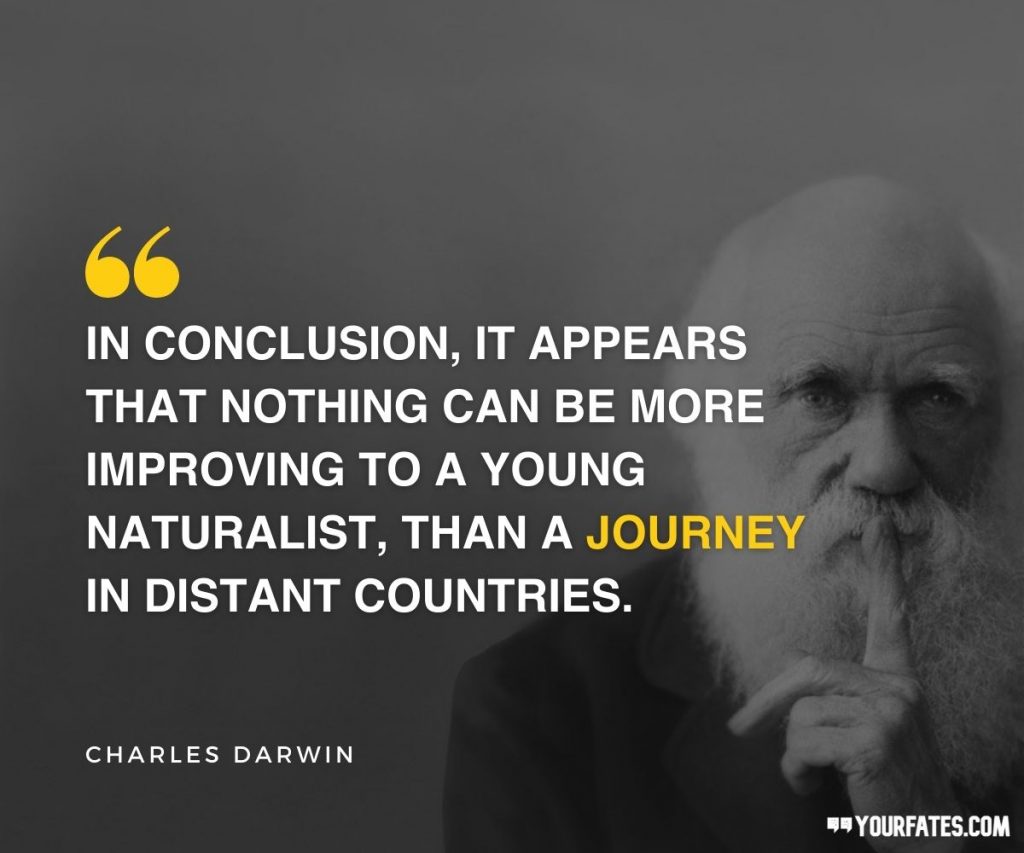 27. “The most powerful natural species are those that adapt to environmental change without losing their fundamental identity which gives them their competitive advantage.” – Charles Darwin

28. “We are always slow in admitting any great change of which we do not see the intermediate steps.” – Charles Darwin

29. “Evolution is written on the wings of butterflies.” – Charles Darwin

30. “The highest possible stage in moral culture is when we recognize that we ought to control our thoughts.” – Charles Darwin

31. “Intelligence is based on how efficient a species became at doing the things they need to survive.” – Charles Darwin 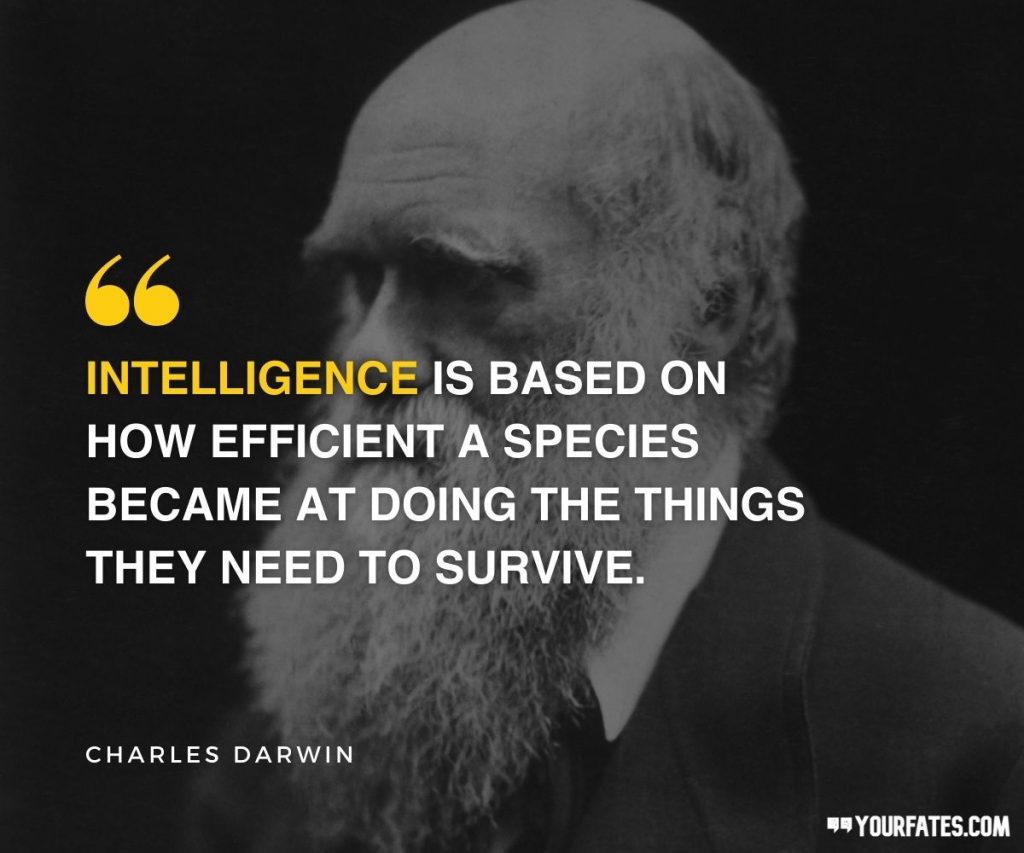 32. “In the long history of humankind (and animal kind, too) those who learned to collaborate and improvise most effectively have prevailed.” – Charles Darwin

33. “Some call it evolution, And others call it God.” – Charles Darwin 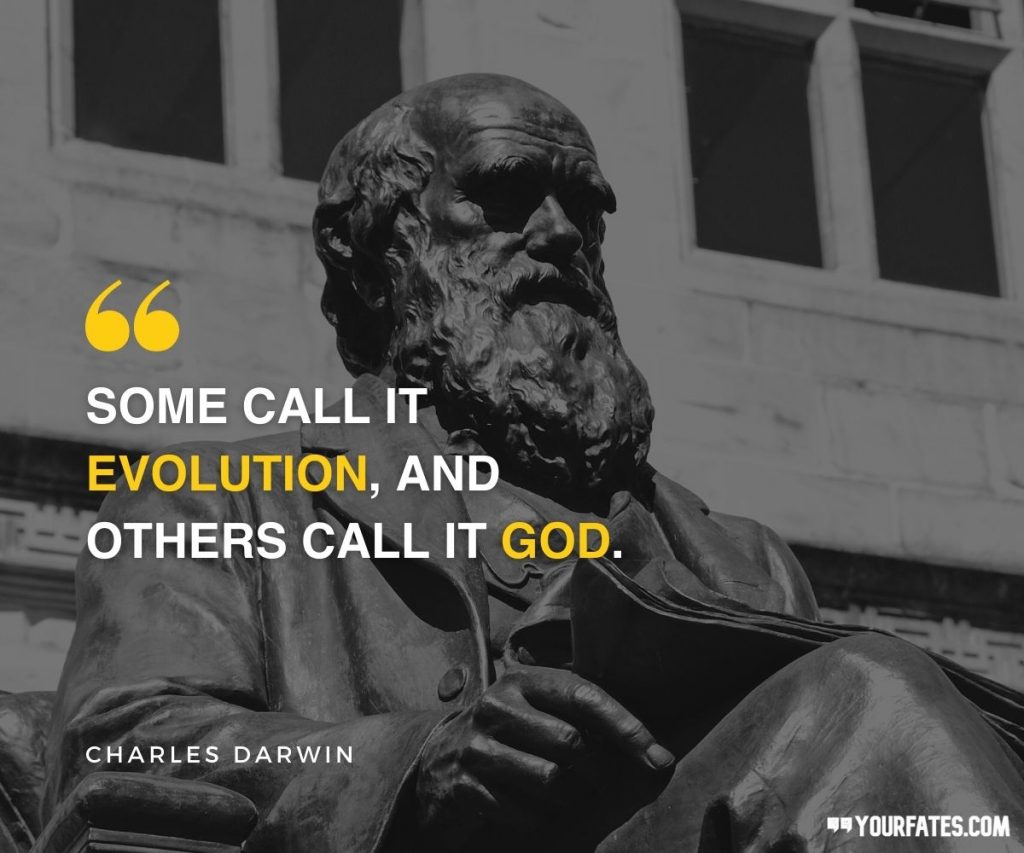 34. “At some future period, not very distant as measured by centuries, the civilized races of man will almost certainly exterminate, and replace the savage races throughout the world.” – Charles Darwin

35. “The fact of evolution is the backbone of biology, and biology is thus in the peculiar position of being a science founded on an improved theory, is it then a science or faith?” – Charles Darwin

36. “If I had my life to live over again, I would have made a rule to read some poetry and listen to some music at least once every week.” – Charles Darwin

37. “I have called this principle, by which each slight variation, if useful, is preserved, by the term of Natural Selection” – Charles Darwin

38. “Keep steadily in mind that each organic being is striving to increase, that each at some period of its life, has the struggle for life, and suffer great destruction.” – Charles Darwin

39. “A man who dares to waste one hour of time has not discovered the value of life.” – Charles Darwin 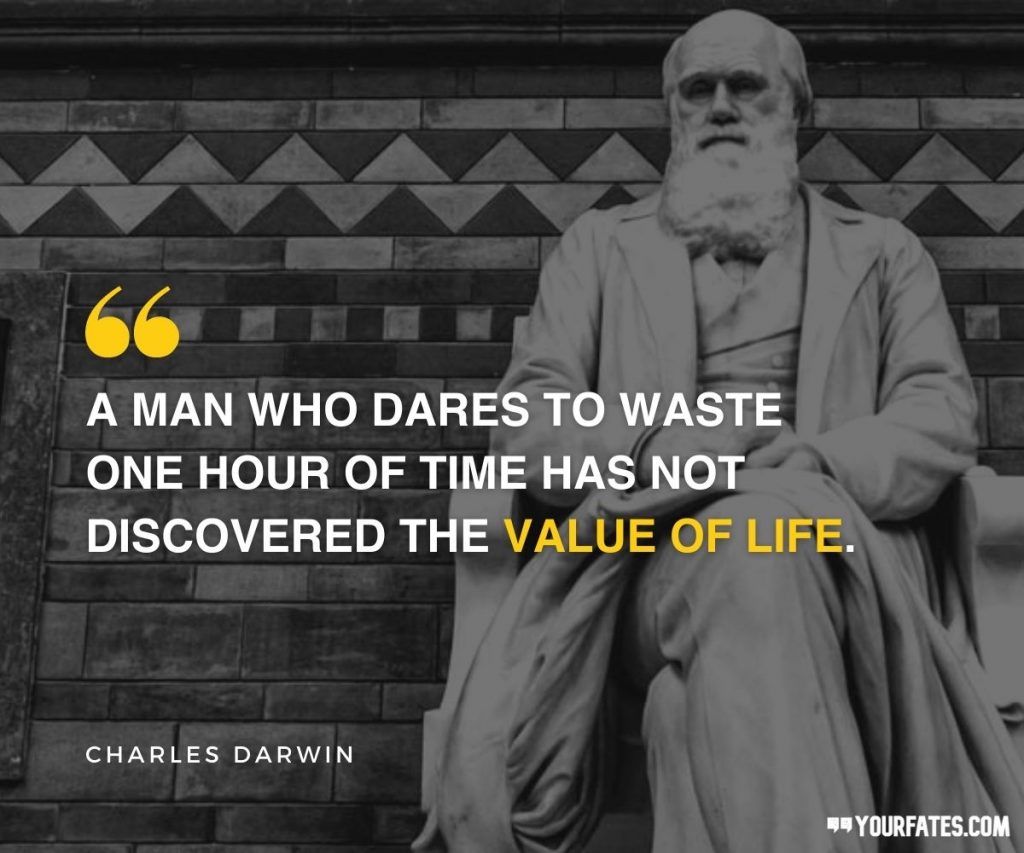 40. “Natural Selection almost inevitably causes much Extinction of the less improved forms of life and induces what I have called Divergence of Character.” – Charles Darwin

41. “We are not here concerned with hopes or fears, only with truth as far as our reason permits us to discover it.” – Charles Darwin

42. “Nothing exists for itself alone, but only in relation to other forms of life.” – Charles Darwin

43. “There is no fundamental difference between man and animals in their ability to feel pleasure and pain, happiness, and misery.” – Charles Darwin 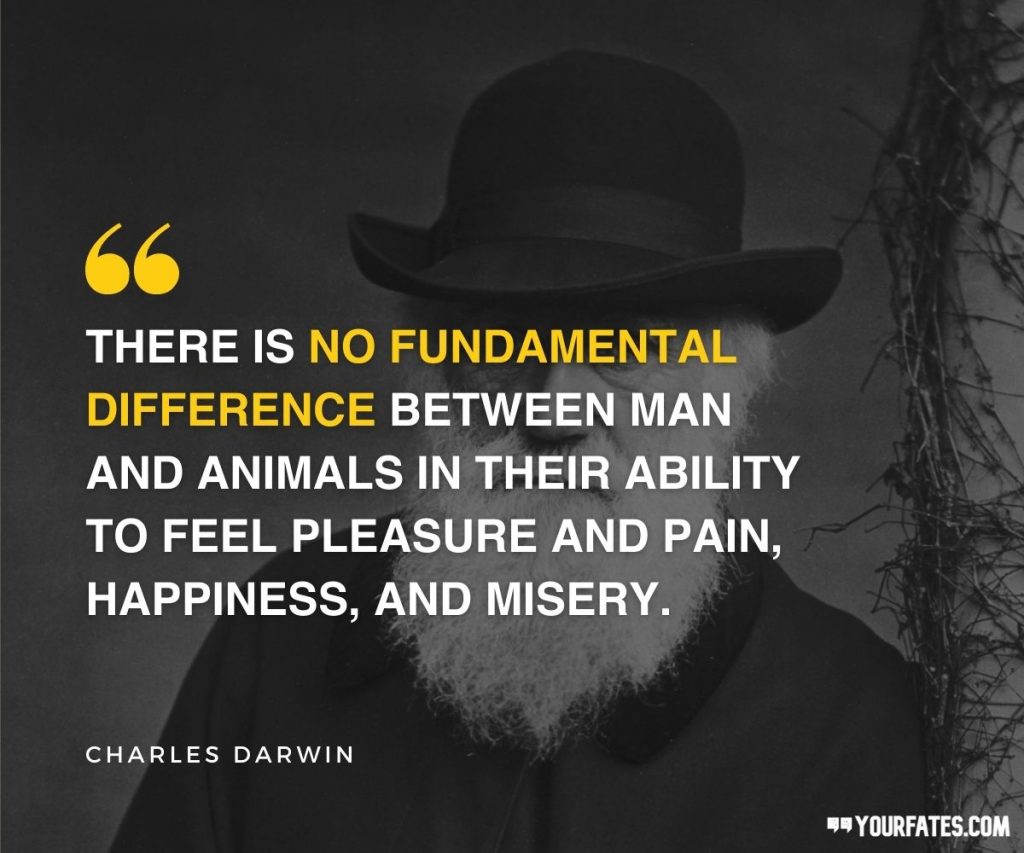 44. “But a plant on the edge of a deserts is said to struggle for life against the drought, though more properly it should be said to be dependent upon the moisture.” – Charles Darwin

45. “We can allow satellites, planets, suns, universe, nay whole systems of universes, to be governed by laws, but the smallest insect, we wish to be created at once by special act.” – Charles Darwin

46. “It is no valid objection that science as yet throws no light on the far higher problem of the essence or origin of life. Who can explain the what is the essence of the attraction of gravity?” – Charles Darwin

47. “There is grandeur in this view of life, with its several powers, having been originally breathed by the Creator into a few forms or into one.” – Charles Darwin 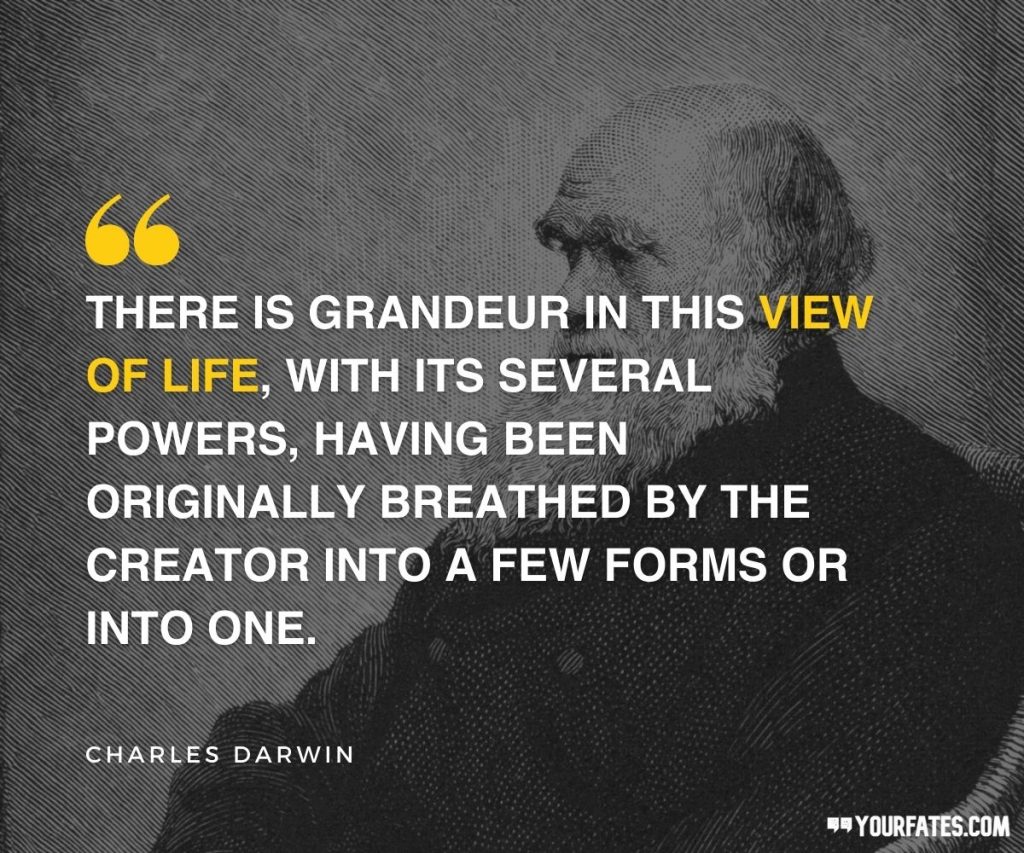 48. “Sexual selection acts in a less rigorous manner than natural selection. The latter produces its effects by the life or death at all ages of the more or less successful individuals.” – Charles Darwin

49. “And thus, the forms of life throughout the universe become divided into groups subordinate to groups.” – Charles Darwin

50. “Light will be thrown on the origin of man and his history.” – Charles Darwin

Hope you would have enjoyed the splendid Charles Darwin Quotes and valued his thoughts and quotes. We guess your 10th biology syllabus is dusted a bit. Just kidding! If you wanna know more about his theory of evolution and papers. You can find it easily on Google or can purchase his On the Origin of Species on Google Books and Amazon.

We hope you like these collections of Charles Darwin Quotes. Also, If you’ve found us useful, please do consider telling your friends about it. All you have to do is send these quotes on WhatsApp and ask them to subscribe to us.