60 Bob Ross Quotes That Will Brighten Your Day

You need the dark in order to show light. – Bobby Ross

If you are fond of paintings, you shall be appreciating Bob Ross. How about looking into the famous quotes by one and only Bob Ross? Presenting you famous Bob Ross Quotes and Sayings:

Bob Ross is an American painter. He had a rough childhood. His parents divorced when he was a child and he dropped out of 9th grade in school. He then started working with his father as a carpenter. He also cut his index finger working with woods but this disability didn’t stop him to paint.

He joined the Air Force at the age of 18. For 20 years, he served in military and developed the interest for paintings in between his servinve after attending a class Art Class in USO Club. He hired instructors to teach him painting but was disappointed as they were all teaching abstract painting.

Bob Ross always painted natural scenes. His paintings are combination of Realism and Imagination. Bob has painted 30,000 paintings in his lifetime. All his paintings are beautiful and praise-worthy but Graceful Waterfall, Winter Sun, Campfire, Cabin in the Woods and Shades of Gray are some of his best paintings. He believed that it is the process of painting that holds the value and not the end result. Bob Ross also hosted a television show called ” The Joy of Painting” in which he used to teach painting to the masses.

Ross was a smoker and because of that he had several health problems. He also had heart attacks twice in mid of his life. Finally, at the age of 52, he died suffering from a disease lymphoma.

So, here’s the one for one of the most famous painters of all time. Enjoy famous Bob Ross Quotes and Sayings:

Don’t forget to also read out the handpicked collection of Rabindranath Tagore Quotes that will change your life and perspective.

“Talent is a pursued interest. Anything that you’re willing to practice, you can do.” – Bob Ross

“If we’re going to have animals around we all have to be concerned about them and take care of them.” – Bob Ross 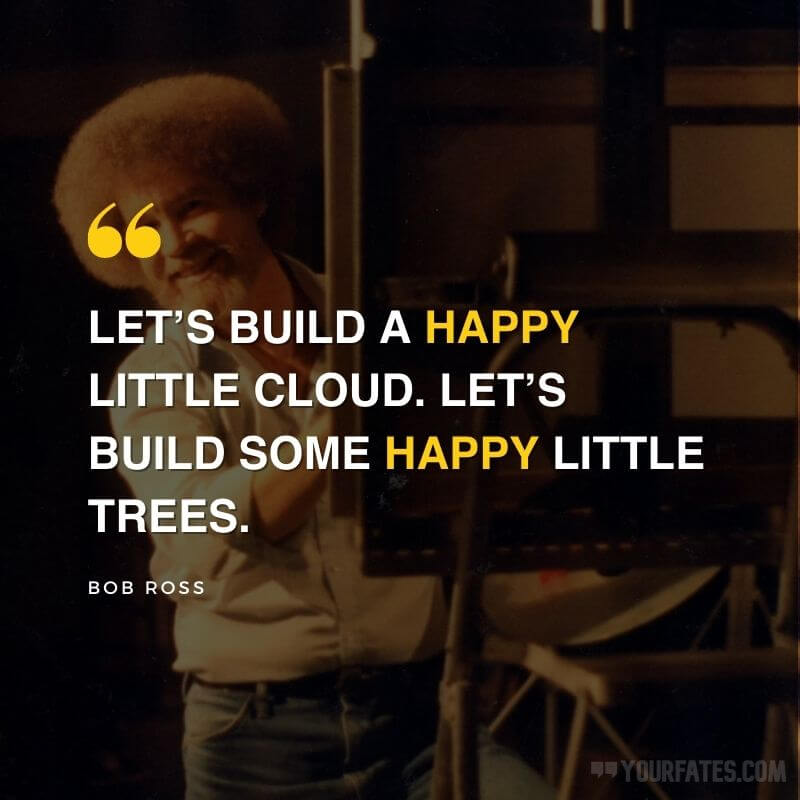 “Most painters want recognition, especially by their peers.” – Bob Ross

“If you study my paintings, there are no signs of human life.” – Bob Ross

“In nature, dead trees are just as normal as live trees.” – Bob Ross

“I don’t intimidate anyone. Instead, I try to get people to believe in themselves.” – Bob Ross

“You can do anything you want. This is your world.” – Bob Ross

“Remember how free clouds are. They just lay around in the sky all day long.” – Bob Ross

“Let’s just blend this little rascal here, ha! Happy as we can be.” – Bob Ross

“We don’t really know where this goes — and I’m not sure we really care.” – Bob Ross

“No pressure. Just relax and watch it happen.” – Bob Ross

“They say everything looks better with odd numbers of things. But sometimes I put even numbers — just to upset the critics.” – Bob Ross

“See how it fades right into nothing. That’s just what you’re looking for.” – Bob Ross

“Trees cover up a multitude of sins.” – Bob Ross

“Maybe in our world there lives a happy little tree over there.” – Bob Ross

“Be sure to use odorless paint thinner. If it’s not odorless, you’ll find yourself working alone very, very quick.” – Bob Ross

“Use absolutely no pressure. Just like an angel’s wing.” – Bob Ross

“There’s nothing wrong with having a tree as a friend.” – Bob Ross

“I guess I’m a little weird. I like to talk to trees and animals. That’s okay though; I have more fun than most people.” – Bob Ross

If you’re enjoying these quotes, make sure to read our collection of William Shakespeare Quotes about love and life.

“You do your best work if you do a job that makes you happy.” –Bob Ross

“I believe, I believe every day is a good day when you paint.” – Bob Ross

“Possessing talent is nothing more than the continuous pursuit of a life-long interest.” – Bob Ross

“The secret to doing anything is believing you can do it.” – Bob Ross

“We don’t make mistakes. We have happy accidents.” – Bob Ross

“Think about a cloud. Just float around and be there.” – Bob Ross

“Everybody has dreams. You are living the American dream, what’s wrong with pushing to secure it for everyone?” – Bob Ross

“You can do anything your heart can imagine.” – Bob Ross

If you’re enjoying this collection of quotes, then you’ll love our collection of Determination Quotes to keep you going through failures.

“It’s so important to do something every day that will make you happy.” – Bob Ross

“If I paint something, I don’t want to have to explain what it is.” – Bob Ross

“We artists are a different breed of people. We’re a happy bunch.” – Bob Ross

“It’s hard to see things when you are too close. Take a step back and look.” – Bob Ross

“I think there’s an artist hidden at the bottom of every single one of us.” – Bob Ross

“I think each of us, sometime in our life, has wanted to paint a picture.” – Bob Ross

“Gotta give him a friend. Like I always say, ‘Everyone needs a friend.’” – Bob Ross

“All you need to paint is a few tools, a little instruction, and a vision in your mind.” – Bob Ross

“If you do too much, it’s going to lose its effectiveness.” – Bob Ross

“There’s nothing in the world that breeds success like success.” – Bob Ross

“You need the dark in order to show the light.” – Bob Ross 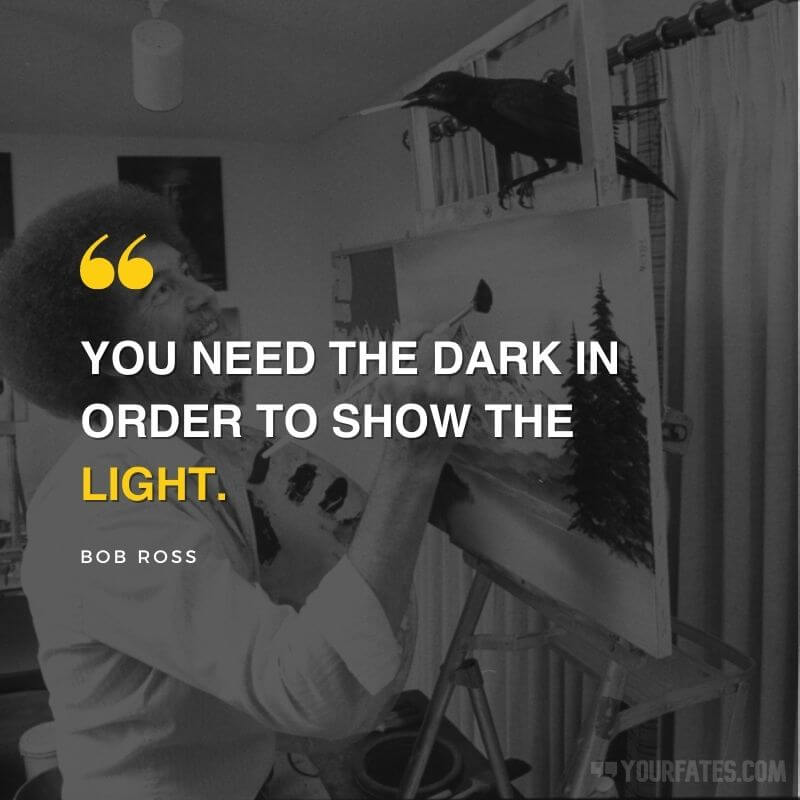 “You have to allow the paint to break to make it beautiful.” – Bob Ross

“You can do anything here — the only prerequisite is that it makes you happy.”  – Bob Ross

“I really believe that if you practice enough you could paint the ‘Mona Lisa’ with a two-inch brush.” – Bob Ross

“Water’s like me. It’s lazy. Boy, it always looks for the easiest way to do things” – Bob Ross

“Don’t forget to make all these little things individuals — all of them special in their own way.” – Bob Ross

“This is your world. You’re the creator. Find freedom on this canvas. Believe, that you can do it, ‘cuz you can do it.” – Bob Ross

“Look around. Look at what we have. Beauty is everywhere—you only have to look to see it.” – Bob Ross

“How do you make a round circle with a square knife? That’s your challenge for the day.” – Bob Ross

What is Bob Ross's famous quote?

"We don't make mistakes, just happy little accidents."
“You have to allow the paint to break to make it beautiful.”
“We don’t laugh because we feel good, we feel good because we laugh.”
"If we're going to have animals around we all have to be concerned about them and take care of them."
"Gotta give him a friend. Like I always say, 'Everyone needs a friend.'"

Bob Ross is a painter who has redefined the process of painting. He believed that there are no mistakes in painting but only little accidents. We hope you like these famous Bob Ross Quotes and Sayings and get motivated.

We hope you like these collections of Bob Ross Quotes. Also, If you’ve found us useful, please do consider telling your friends about it. All you have to do is send these quotes on WhatsApp and ask them to subscribe to us.