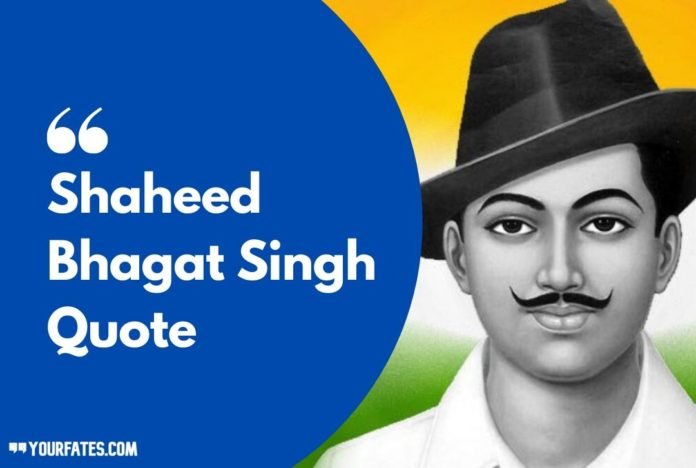 Today I will share some Shaheed Bhagat Singh Quotes. If India is free today, there was a lot of support from Bhagat Singh, so let’s have some of his quotes to share with you.

He began to protest British rule in India while still, a youth and soon fought for national independence, He also worked as a writer and editor in Amritsar for Punjabi- and Urdu-language newspapers espousing Marxist theories, He is credited with popularizing the catchphrase “Inquilab zindabad” (“Long live the revolution”).

In 1928 Bhagat Singh plotted with others to kill the police chief responsible for the death of Indian writer and politician Lala Lajpat Rai, one of the founders of National College, during a silent march opposing the Simon Commission. Instead, in a case of mistaken identity, junior officer J.P. Saunders was killed, and Bhagat Singh had to flee Lahore to escape the death penalty. In 1929 he and an associate lobbed a bomb at the Central Legislative Assembly in Delhi to protest the implementation of the Defence of India Act and then surrendered. He was hanged at the age of 24 for the murder of Saunders.

If you don’t already know about him, read up on him but here are powerful quotes by Bhagat Singh that explain the drive and motivation behind his search for freedom:

1. “They may kill me, but they cannot kill my ideas. They can crush my body, but they will not be able to crush my spirit.” – Bhagat Singh

3. “It is easy to kill individuals but you cannot kill the ideas.” – Bhagat Singh

4. “Life is lived on its own others’ shoulders are used only at the time of the funeral.” – Bhagat Singh

5. “Love always elevates the character of the man. It never lowers him, provided love be love.” – Bhagat Singh

6. “If the deaf are to hear the sound has to be very loud.” – Bhagat Singh

7. “Merciless criticism and independent thinking are the two necessary traits of revolutionary thinking. Lovers, Lunatics, and poets are made of same stuff.” – Bhagat Singh

8. “I am a man and all that affects mankind concerns me.” – Bhagat Singh

9. “For us, compromise never means surrender, but a step forward and some rest. That is all and nothing else.” – Bhagat Singh

10. “Revolution is an inalienable right of mankind. Freedom is an imperishable birthright of all. Labor is the real sustainer of society, the sovereignty of the ultimate destiny of the workers.” – Bhagat Singh

11. “Every tiny molecule of Ash is in motion with my heat I am such a Lunatic that I am free even in Jail.” – Bhagat Singh

12. “In times of great necessity, violence is indispensable.” – Bhagat Singh

13. “The aim of life is no more to control the mind, but to develop it harmoniously; not to achieve salvation hereafter, but to make the best use of it here below.” – Bhagat Singh

14. “I emphasize that I am full of ambition and hope and of full charm of life. But I can renounce all at the time of need, and that is the real sacrifice.” – Bhagat Singh

16. “Man acts only when he is sure of the justness of his action, as we threw the bomb in the Legislative Assembly.” – Bhagat Singh

17. “The sanctity of law can be maintained only so long as it is the expression of the will of the people.” – Bhagat Singh

18. “The dirty alliance between religious preachers and possessors of power brought the boon of prisons, gallows, knouts, and above all such theories for mankind.” – Bhagat Singh

19. “I ask why your Omnipotent God does not hold a man back when he is about to commit a sin or offense. It is child’s play for God. Why did He not kill warlords? Why did He not remove the fury of war from their minds? In this way, God could have saved humanity from great calamity and horror.” – Bhagat Singh

20. “The spirit of Revolution should always permeate the soul of humanity, so that the reactionary forces may not accumulate to check its eternal onward march.” – Bhagat Singh

21. “Force when aggressively applied is “violence” and is, therefore, morally unjustifiable, but when it is used in the furtherance of a legitimate cause, it has its moral justification. The elimination of force at all costs in Utopian.” – Bhagat Singh

22. “By Revolution, we mean the ultimate establishment of an order of society which may not be threatened by such breakdown, and in which the sovereignty of the proletariat should be recognized and a world federation should redeem humanity from the bondage of capitalism and misery of imperial wars.” – Bhagat Singh

23. “One should not interpret the word “Revolution” in its literal sense. Various meanings and significances are attributed to this word, according to the interests of those who use or misuse it. For the established agencies of exploitation, it conjures up a feeling of blood-stained horror. To the revolutionaries, it is a sacred phrase.” – Bhagat Singh

24. “If the deaf are to hear, the sound has to be very loud. When we dropped the bomb, it was not our intention to kill anybody. We have bombed the British Government. The British must quit India and make her free.” – Bhagat Singh

25. “The elimination of force at all costs is Utopian and the new movement which has arisen in the country and of whose dawn we have given a warning is inspired by the ideals which Guru Gobind Singh and Shivaji, Kamal Pasha and Reza Khan, Washington, and Garibaldi, Lafayette and Lenin preached.” – Bhagat Singh

26. “It is beyond the power of any man to make a revolution. Neither can it be brought about on any appointed date. It is brought about by special environments, social and economic. The function of an organised party is to utilise any such opportunity offered by these circumstances.” – Bhagat Singh

27. “The people generally get accustomed to the established order of things and begin to tremble at the very idea of a change. It is this lethargical spirit that needs be replaced by the revolutionary spirit.” – Bhagat Singh

28. “But man’s duty is to try and endeavour, success depends upon chance and environments.” – Bhagat Singh

29. “Philosophy is the outcome of human weakness or limitation of knowledge”. – Bhagat Singh

30. “Old order should change, always and ever, yielding place to new, so that one good order may not corrupt the world.” – Bhagat Singh

32. “Bombs and pistols don’t make a revolution. The sword of revolution is sharpened on the whetting stone of ideas.” – Bhagat Singh

33. “Revolution did not necessarily involve sanguinary strife. It was not a cult of bomb and pistol.” – Bhagat Singh

34. “People get accustomed to the established order of things and tremble at the idea of change. It is this lethargic spirit that needs to be replaced by the revolutionary spirit.” – Bhagat Singh

36. “Any man who stands for progress has to criticize, disbelieve, and challenge every item of the old faith. Item by item, he has to reason out every nook and corner of the prevailing faith.” – Bhagat Singh

37. “What happens when a non-violent attempt fails to achieve the objective? It is here that soul-force has to be combined with physical force so as not to remain at the mercy of the tyrannical and ruthless enemy.” – Bhagat Singh

38. “Labour is the real sustainer of society” – Bhagat Singh

What is the famous quote of Bhagat Singh?

1. "They may kill me, but they cannot kill my ideas. They can crush my body, but they will not be able to crush my spirit."
2. "I am such a lunatic that I am free even in jail"
3. "I am full of ambition and hope and charm in life. But I can renounce everything in time of need'
4. "If the deaf have to hear, the sound has to be very loud"
5. "Revolution is an inalienable right of mankind. Freedom is an imperishable birthright of all. Labour is the real sustainer of society."

Bhagat Singh became a martyr at just 23, in 1931,16 years before India eventually won her freedom from British rule. To have died at such a young age, so many years before our freedom was sealed, he must have done quite a lot in the years he was alive to rightfully come to be known as the greatest freedom fighter India has ever seen.

We hope you like these collections of Shaheed Bhagat Singh Quotes, Wishes, and Messages. Also, If you’ve found us useful, please do consider telling your friends about it. All you have to do is send these quotes on WhatsApp and ask them to subscribe to us.