55 The Office Quotes – Michael Scott Quotes From The Office 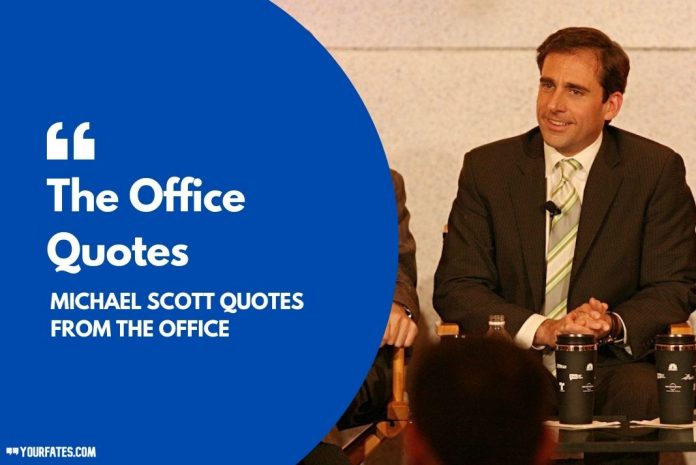 I am sure ‘The Office’ is one of the best TV Shows of your life. Michael and his employees were known for their funny commentary that left viewers laughing, and, at times, shaking their heads. From Michael Scott to Dwight Schrute and the rest of the Scranton branch. read on for some of the most memorable, quotable lines from all nine seasons of The Office. As one of the most iconic shows of all time, with some of the most amazing characters of all time, it’s pretty obvious that The Office has more than a few quotable one-liners. Here are a few of the best The Office Quotes:

Best Quotes From The Office

2. “No, I’m not going to tell them about the downsizing. If a patient has cancer, you don’t tell them.” – Michael Scott (Steve Carell), The Office, Season 1: Pilot

3. “Sometimes I’ll start a sentence and I don’t even know where it’s going. I just hope I find it along the way.” – Michael Scott (Season 5, The Duel)

4. “Guess what, I have flaws. What are they? Oh, I don’t know. I sing in the shower. Sometimes I spend too much time volunteering. Occasionally I’ll hit somebody with my car. So sue me.” – Michael Scott (Steve Carell), The Office, Season 4: Fun Run

8. “Would I rather be feared or loved? Easy. Both. I want people to be afraid of how much they love me.” – Michael Scott (Steve Carell), The Office, Season 2: The Fight

9. “I guess I’ve been working so hard, I forgot what it’s like to be hard working.” – Michael Scott (Steve Carell), The Office, Season 7: Training Day

11. “My heart belongs to music. But my ass belongs to these people.” – Andy Bernard (Season 8, The Incentive)

12. “If I had a gun with two bullets and I was in a room with Hitler, Bin Laden, and Toby, I would shoot Toby twice.” – Michael Scott (Season 6, The Chump)

13. “Last, and possibly least, you didn’t think we’d forget, “That’s what she said!” (Michael Scott, Too many times)

14. “The worst thing about prison was the dementors.” – Michael Scott (Steve Carell), The Office, Season 3: The Convict

15. “I want you to rub butter on my foot…Pam, please? I have Country Crock.” – Michael Scott (Steve Carell), The Office, Season 2: The Injury

Funny Quotes From The Office

16. “If you don’t like it, Stanley, you can go to the back of the bus…Or the front of the bus or drive the bus.” – Michael Scott (Steve Carell), The Office, Season 3: Beach Games

17. “My parents used to scramble to find babysitters, so they could take my little brother to do stuff.” – Andy Bernard (Ed Helms), The Office, Season 7: Andy’s Play

22. “There are always a million reasons not to do something.” – Jan Levinson (Season 2, Boys and Girls) 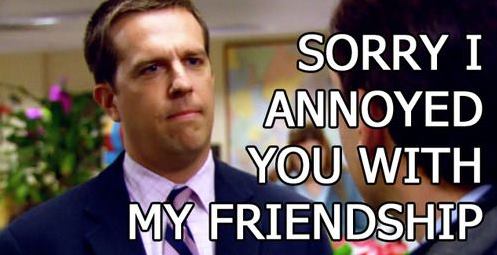 24. “Whenever I’m about to do something, I think, ‘Would an idiot do that?’ And if they would, I do not do that thing.” – Dwight Schrute (Season 3, Business School)

25. “I am running away from my responsibilities. And it feels good.” – Michael Scott (Season 4, Money)

26. “People underestimate the power of nostalgia. Nostalgia is truly one of the greatest human weaknesses, second only to the neck.”  – Dwight Schrute (Season 9, The Farm)

27. “I feel like all my kids grew up, and then they married each other. It’s every parent’s dream.”

The Office Quotes by Michael Scott

36. “I am fast. To give you a reference point. I’m somewhere between a snake and a mongoose. And a panther.” – Dwight Schrute (Season 3, The Merger)

37. “It’s like I used to tell my wife. I do not apologize unless I think I’m wrong. And if you don’t like it you can leave. And I say the same thing to my current wife and I’ll say it to my next one, too.” – Stanley Hudson (Season 4, Did I Stutter)

38. “This is a dream that I’ve had…since lunch…and I’m not giving it up now.” – Michael Scott (Season 5, The Michael Scott Paper Company)

39. “In the end, the greatest snowball isn’t a snowball at all. It’s fear. Merry Christmas.” – Dwight Schrute (Season 7, Classy Christmas)

42. “I wish there was a way to know you’re in the good old days before you’ve actually left them.”

44. “There’s a lot of beauty in ordinary things. Isn’t that kind of the point?”

45. “My perfect Valentine’s day? I’m at home, three cell phones in front of me, fielding desperate calls from people who want to buy one of the fifty restaurant reservations I made over six months ago.” – Dwight Schrute (Rainn Wilson), The Office, Season 7: PDA

46. “Sometimes I get so bored I just want to scream, and then sometimes I actually do scream. I just sort of feel out what the situation calls for.” – Kelly Kapoor (Mindy Kaling), The Office, Season 8: After Hours

48. “It is St. Patrick’s Day….It is the closest that the Irish will ever get to Christmas.” – Michael Scott (Steve Carell), The Office, Season 6: The Delivery (1)

49. “I don’t understand. We have a day honoring Martin Luther King, but he didn’t even work here.” – Michael Scott (Steve Carell), The Office, Season 3: Grief Counseling

51. “Ultimatums are key. Basically, nobody does anything for me unless I threaten to kill myself.” – Kelly Kapoor (Season 7, Classy Christmas)

53. “I work hard all day. I like knowing that there’s going to be a break. Most days I just sit and wait for the break.” – Kevin Malone (Season 4, Survivor Man)

We hope you like these collections of The Office Quotes. Also, If you’ve found us useful, please do consider telling your friends about it. All you have to do is send these quotes on WhatsApp and ask them to subscribe to us.

Next article
Hannibal Lecter Quotes That Will Give You Goosebumps

50 Spongebob Quotes That Will Make Your Day

66 Naruto Quotes That Will Never Let You Lose Hope