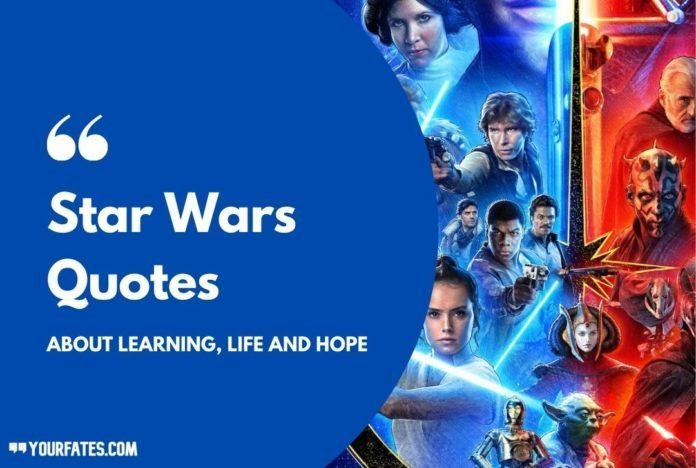 Star Wars film series (created by George Lucas) became one of the most successful and influential franchises in motion picture history. Begun in the 1970s and ’80s and resuscitated at the turn of the 21st century, the Star Wars films continually advanced the field of motion picture special effects and developed into an enormously lucrative merchandising industry.

There are many quotes from star wars that are our favorite. Tell us in the comment section which is your best Star Wars Quotes from below our collection.

1. “In my experience, there’s no such thing as luck.” -Obi-Wan Kenobi

2. “Would somebody get this big walking carpet out of my way?” – Princess Leia

5. “Once you start down the dark path, forever will it dominate your destiny.” -Yoda

6. “I’ll never turn to the dark side. You’ve failed, your highness. I am a Jedi, like my father before me.”  -Luke Skywalker

11. “I’m just a simple man trying to make my way in the universe.” -Jango Fett 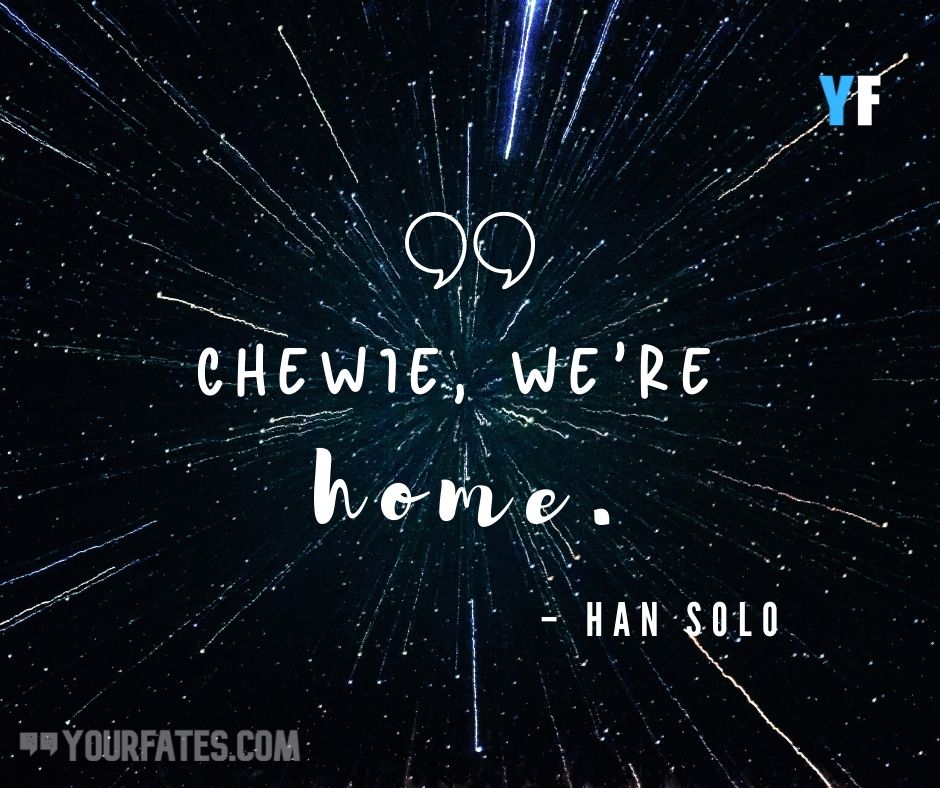 13. “Don’t you call me a mindless philosopher, you overweight glob of grease!” – C-3PO

14. “You look absolutely beautiful. You truly belong here with us among the clouds.” – Lando (to Leia)

15. “Every time I walked away from something I wanted to forget, I told myself it was for a cause that I believed in. A cause that was worth it. Without that, we’re lost.” -Cassian Andor

18. “I find your lack of faith disturbing.” -Darth Vader

20. “Someday I will be the most powerful Jedi ever.” -Anakin Skywalker

21. “I sense great fear in you, Skywalker. You have hate. You have anger. But you don’t use them.”  -Count Dooku

22. “I was not elected to watch my people suffer and die while you discuss this invasion in a committee.” -Queen Amidala

24. “Who’s the more foolish; the fool, or the fool who follows him?” -Obi-Wan Kenobi

25. “Compassion, which I would define as unconditional love, is essential to a Jedi’s life. So you might say that we are encouraged to love.” -Anakin Skywalker

27. “In a dark place, we find ourselves, and a little more knowledge lights our way.” –Yoda

28. “He is as clumsy as he is stupid. General, prepare your troops for a surface attack.” – Darth Vader

30. “Now, witness the power of this fully operational battle station.” – The Emperor

32. “Be careful not to choke on your aspirations, Director.” – Darth Vader

33. “Someone has to save our skins. Into the garbage chute, flyboy.” – Princess Leia 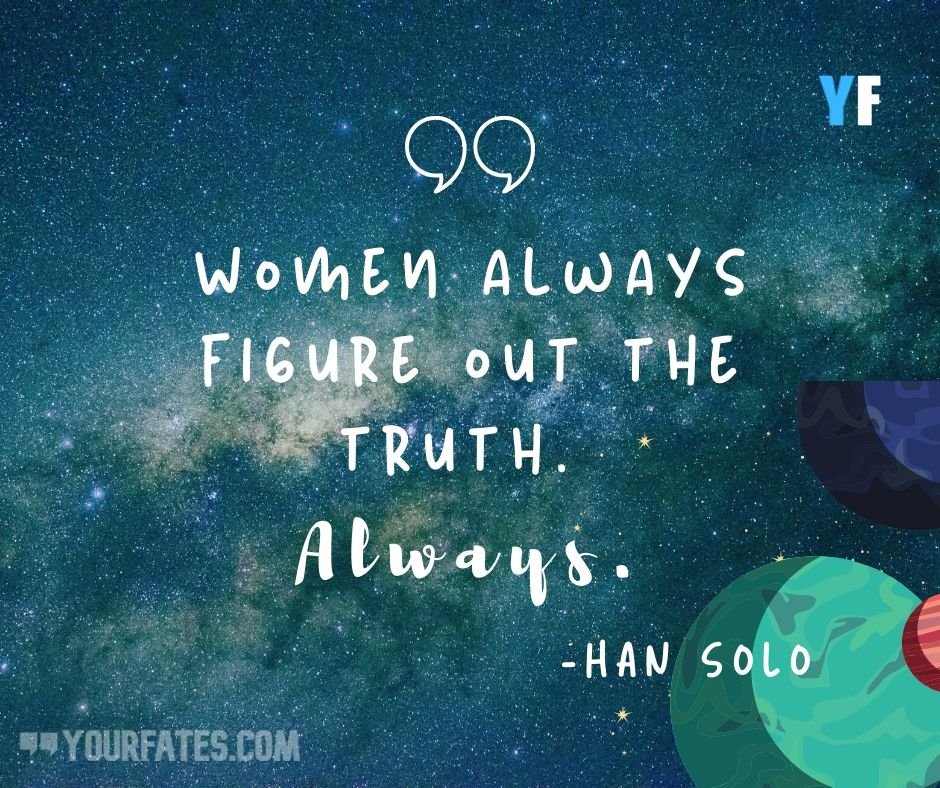 35. “It’s the ship that made the Kessel run in less than twelve parsecs. I’ve outrun Imperial starships. Not the local bulk cruisers, mind you. I’m talking about the big Corellian ships, now. She’s fast enough for you, old man.” – Han Solo

36. “The ability to speak does not make you intelligent.” -Yoda 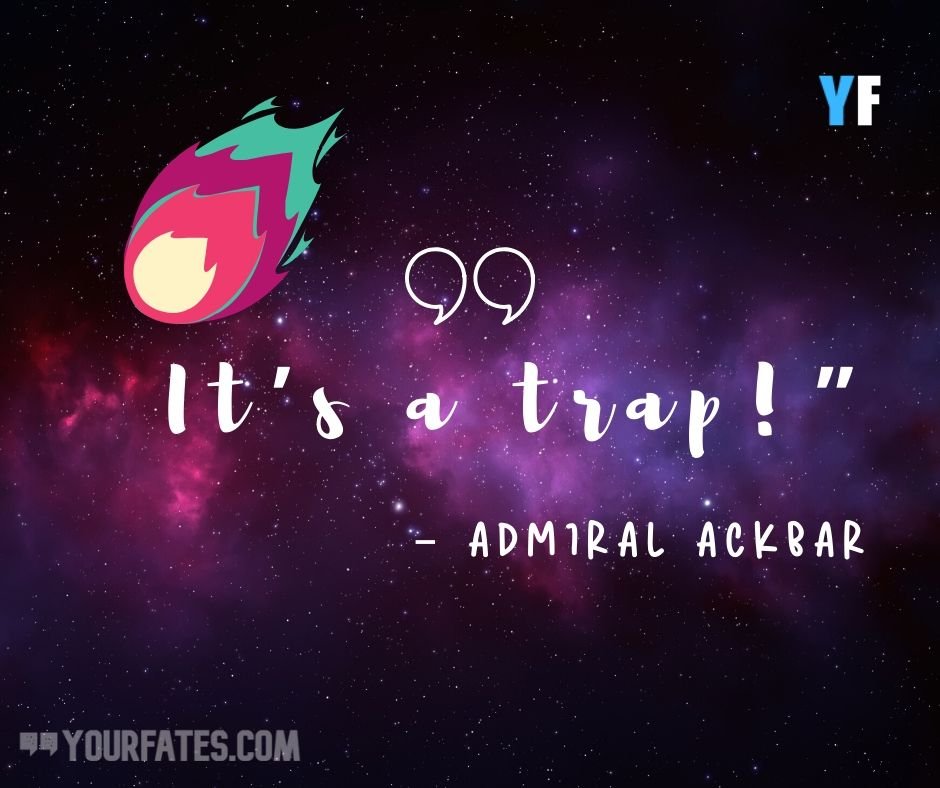 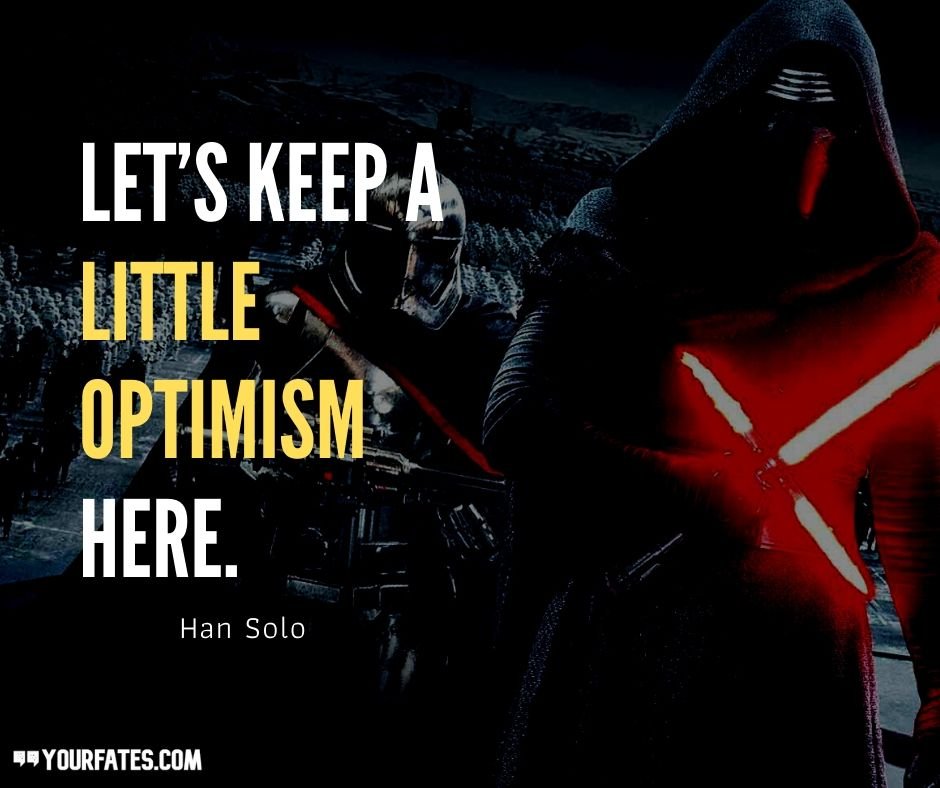 44. “I’ll never turn to the dark side. You’ve failed, your highness. I am a Jedi, like my father before me.” – Luke Skywalker 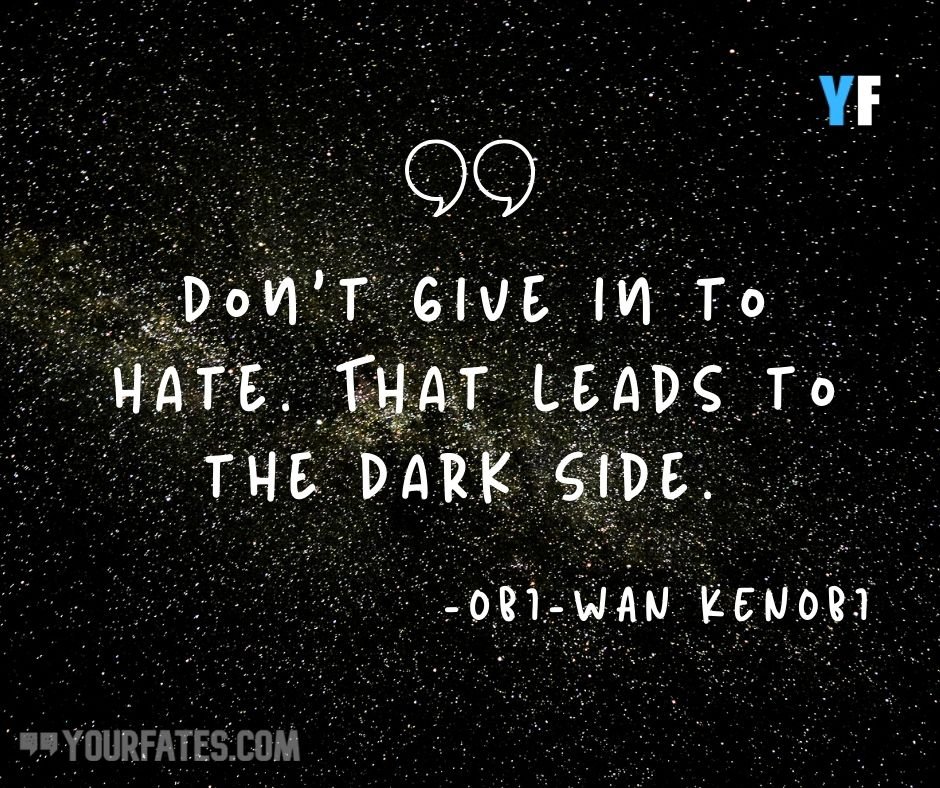 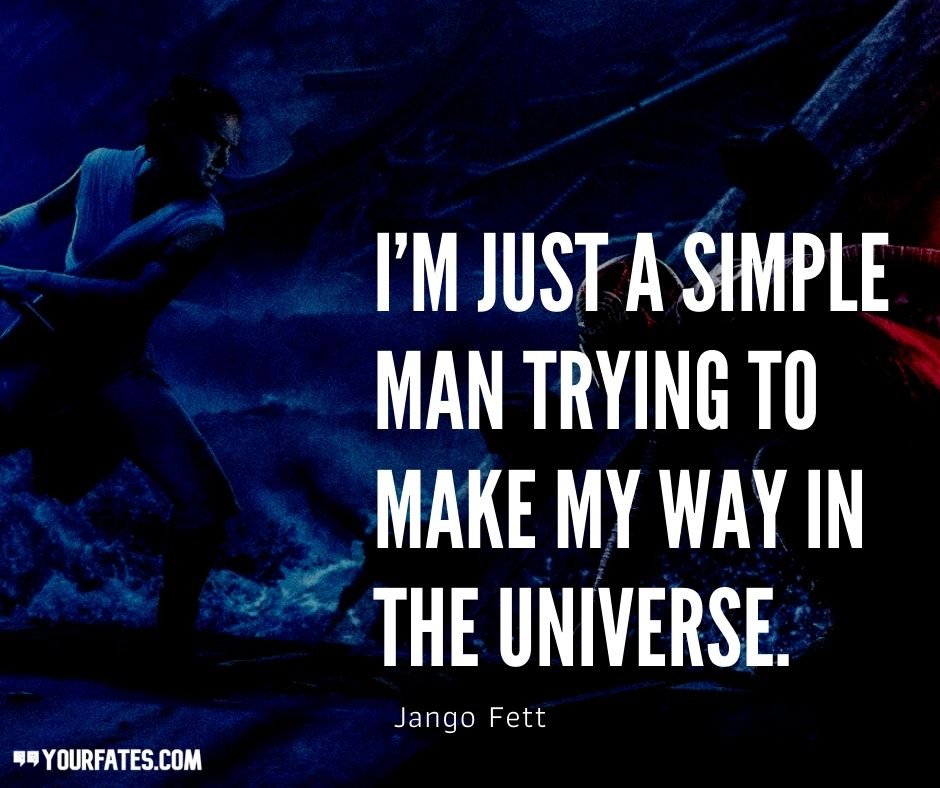 53. “Attachment is forbidden. Possession is forbidden. Compassion, which I would define as unconditional love, is essential to a Jedi’s life. So you might say, that we are encouraged to love.”  -Anakin Skywalker 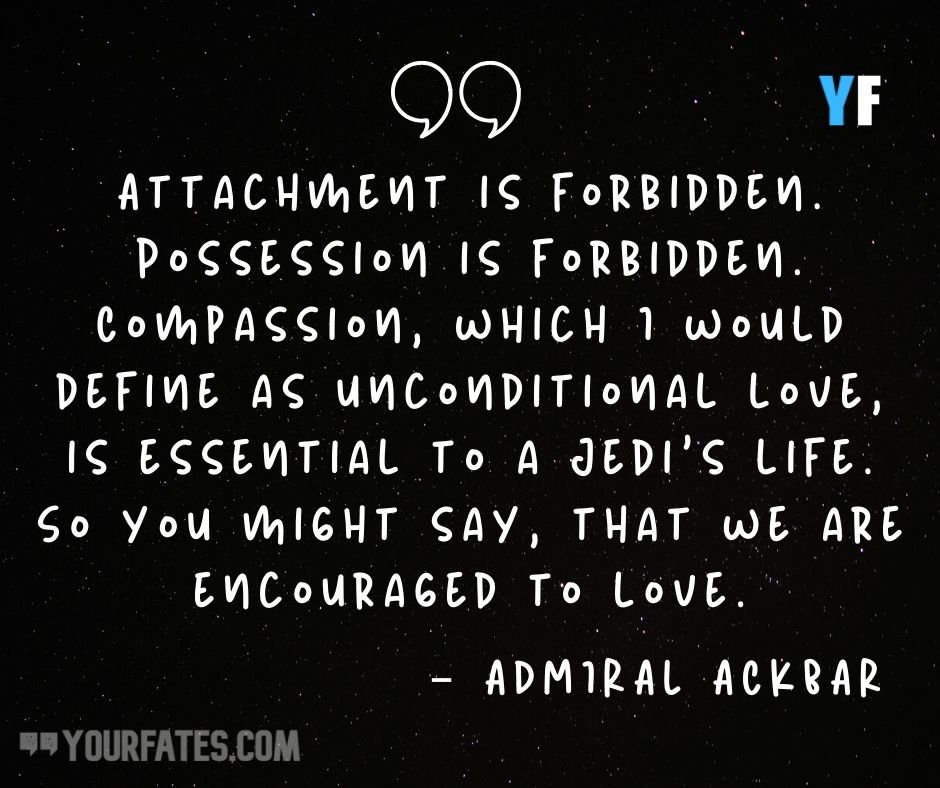 54. “I have taught you everything I know. And you have become a far greater Jedi than I could ever hope to be.” -Obi-Wan Kenobi

To celebrate the massive impact these movies have had on our lives, we have created the following list of inspirational Star Wars quotes. Enjoy reading.

58. “Someday I will be the most powerful Jedi ever.” -Anakin Skywalker 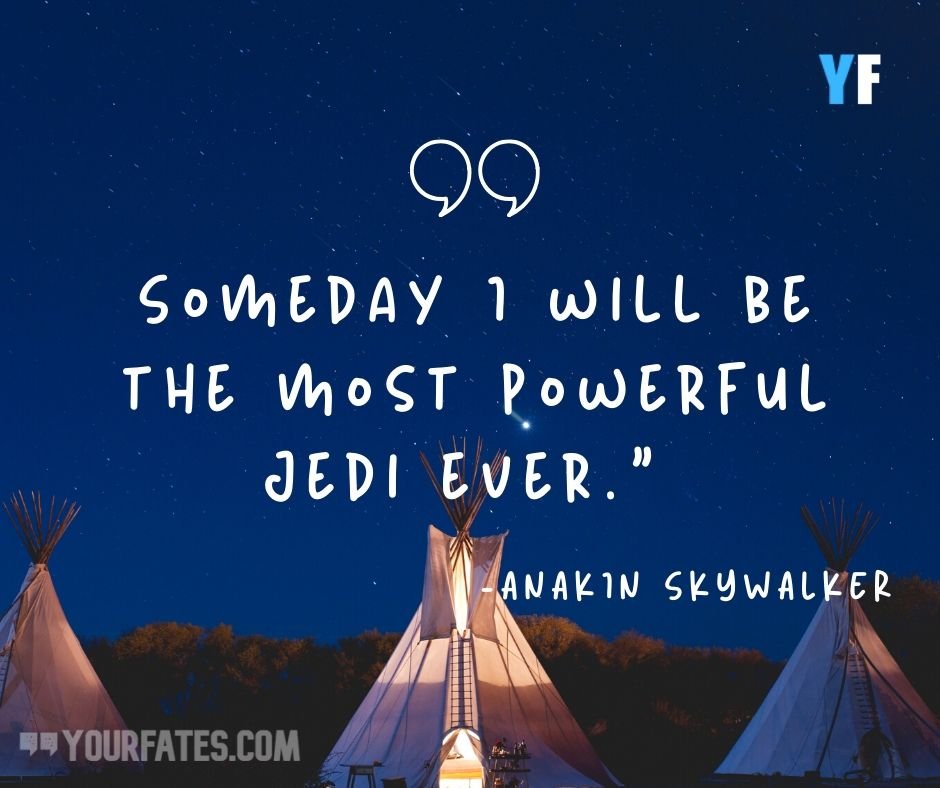 59. “If you strike me down I shall become more powerful than you can possibly imagine.” -Obi-Wan Kenobi

60. “The Force is not a power you have. It’s not about lifting rocks. It’s the energy between all things, a tension, a balance, that binds the universe together.”  -Luke Skywalker 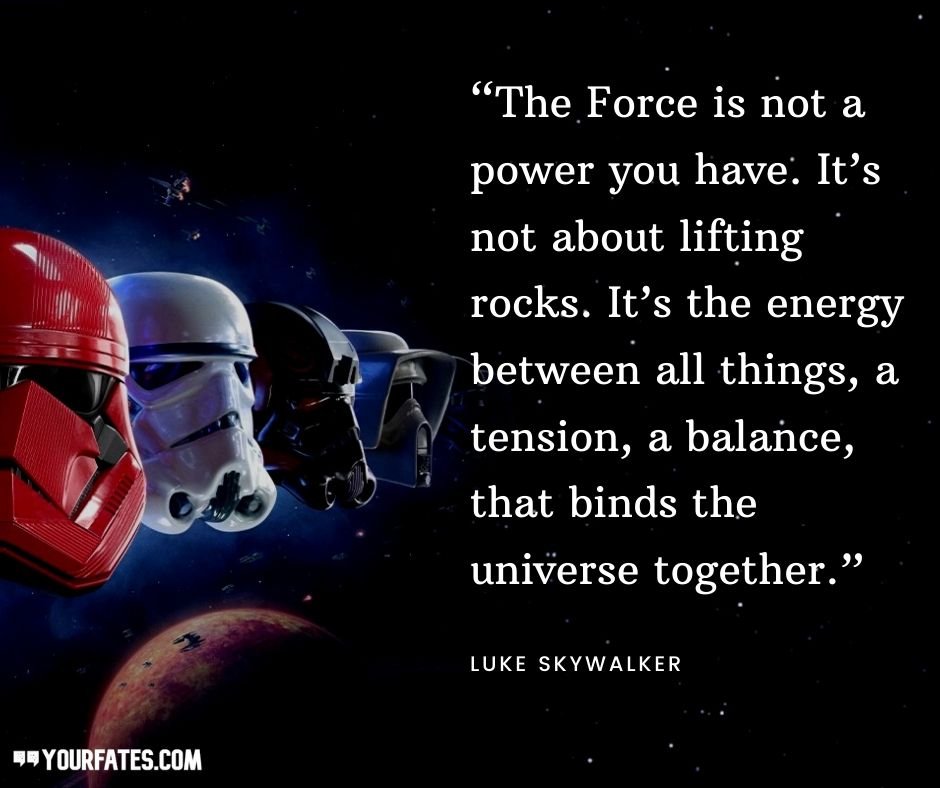 61. “It’s the ship that made the Kessel run in less than twelve parsecs. I’ve outrun Imperial starships. Not the local bulk cruisers, mind you. I’m talking about the big Corellian ships, now. She’s fast enough for you, old man.” -Han Solo

62. “So this is how liberty dies…with thunderous applause.” – Padmé Amidala

63. “Luke, you can destroy the Emperor. He has foreseen this. It is your destiny. Join me, and together we can rule the galaxy as father and son.” -Darth Vader

64. “Train yourself to let go of everything you fear to lose.” -Yoda

65. “An object cannot make you good or evil. The temptation of power, forbidden knowledge, even the desire to do good can lead some down that path. But only you can change yourself.” – Bendu 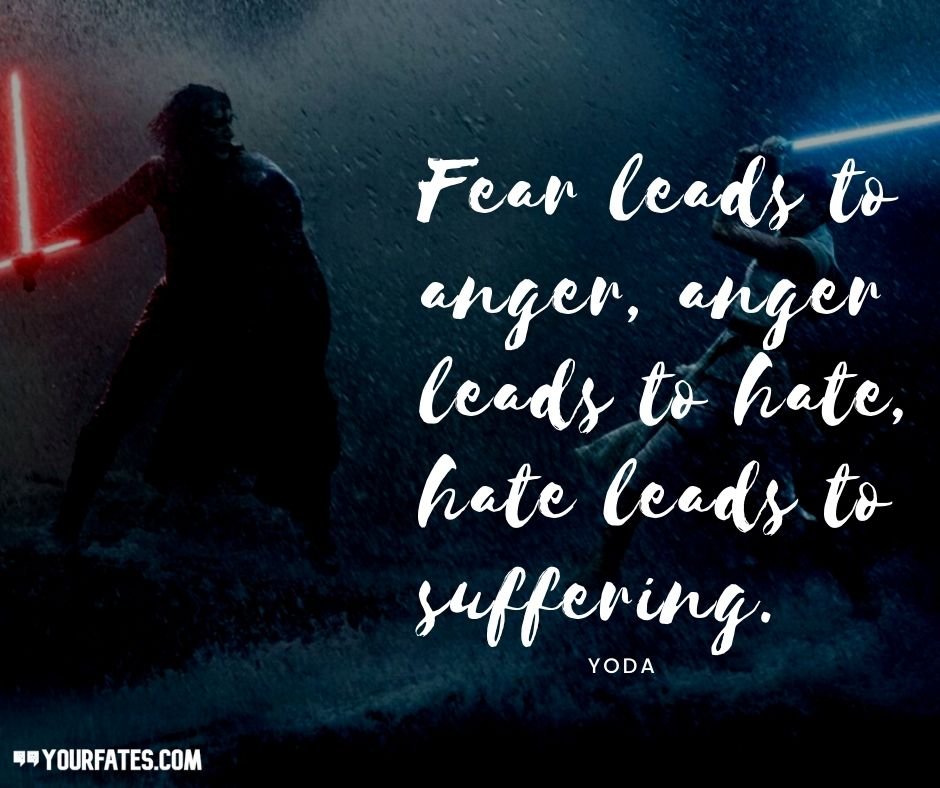 67. “Search your feelings, you know you to be true.” -Darth Vader

68. “Something inside me has always been there, but now it’s awake.” -Rey 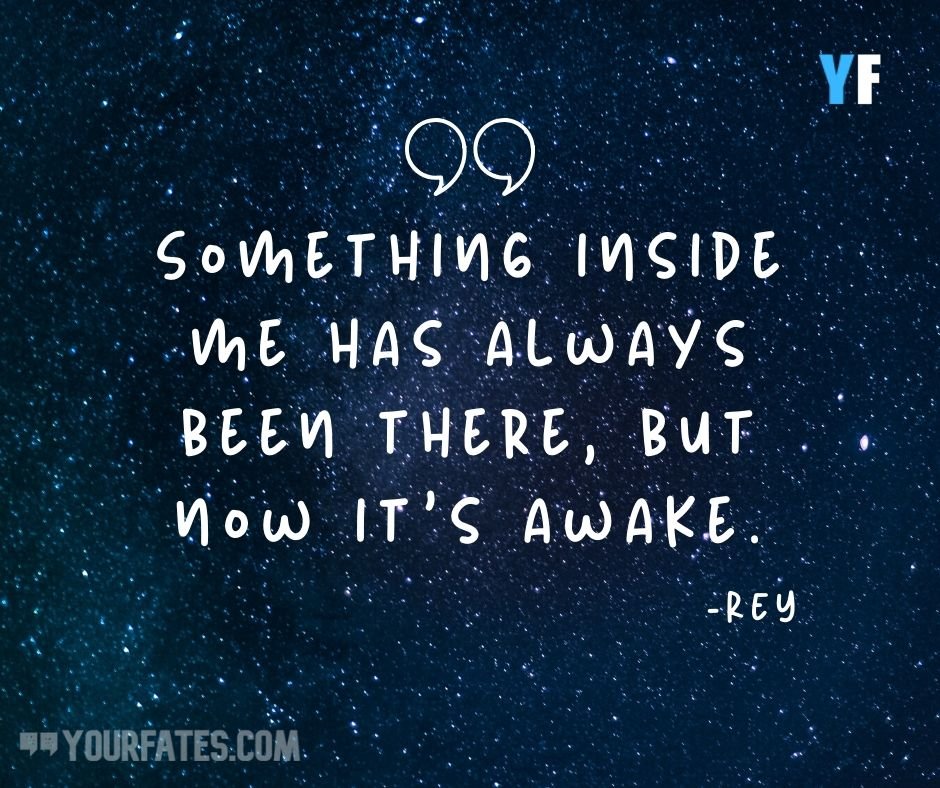 We hope you like these collections of Star Wars Quotes. Also, If you’ve found us useful, please do consider telling your friends about it. All you have to do is send these quotes on WhatsApp and ask them to subscribe to us.