So April is the fourth month of the year and are we already done with the year? We hope not. And if you are, then might be that you need some motivational and inspirational April Quotes so that you can make the most of this month and your year can get back on track, because we have around 8 months left for making this year a hit.

April brings April fool’s day but April is also a beautiful month when the Spring is on the peak and flowers are blooming everywhere and the Easter Bunny is about to make an appearance in our lives. It is month of beautiful and warm weather, great for exploring through travelling and great for spending time with your family and friends. So make sure to take a break from your work and plan a picnic.

April gets its name from “aperire” which means to open. And April opens the larger gates for the Spring season after March does so. So take a look at these beautiful April Quotes and Sayings that will fill your heart with the essence of spring flowers:

1. “April is the kindest month. April gets you out of your head and out working in the garden.” – Marty Rubin 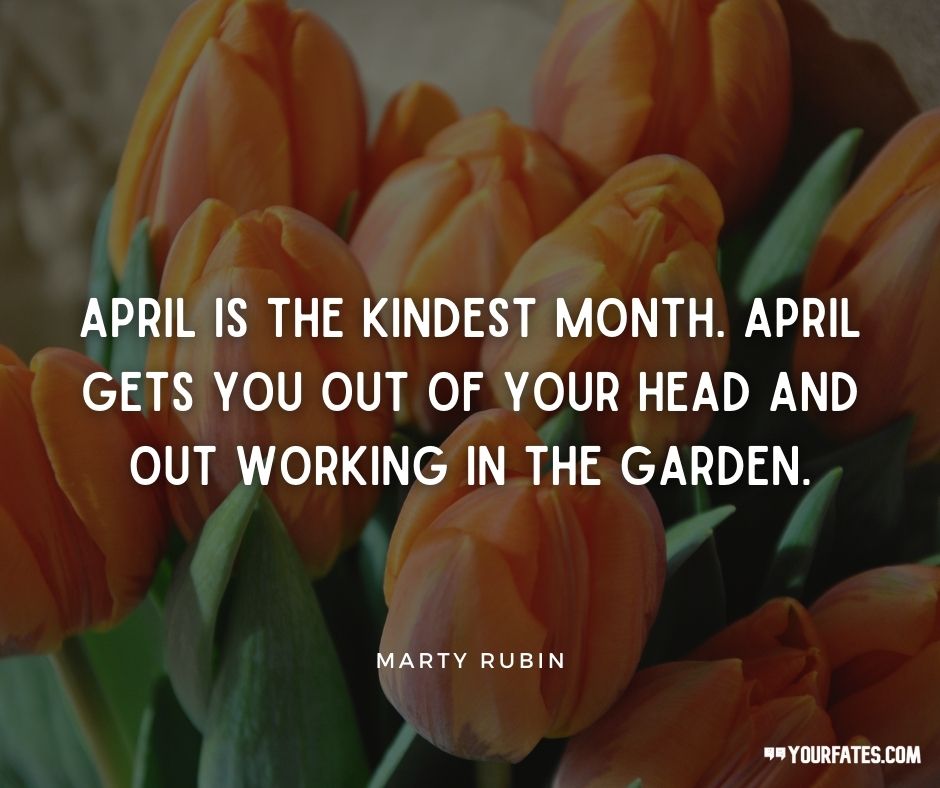 2. “Some people can’t be fooled on April Fool’s Day because they were fooled too many times during their entire lifetime.” – Akash B Chandran

4. “April is a promise that May is bound to keep.” – Hal Borland 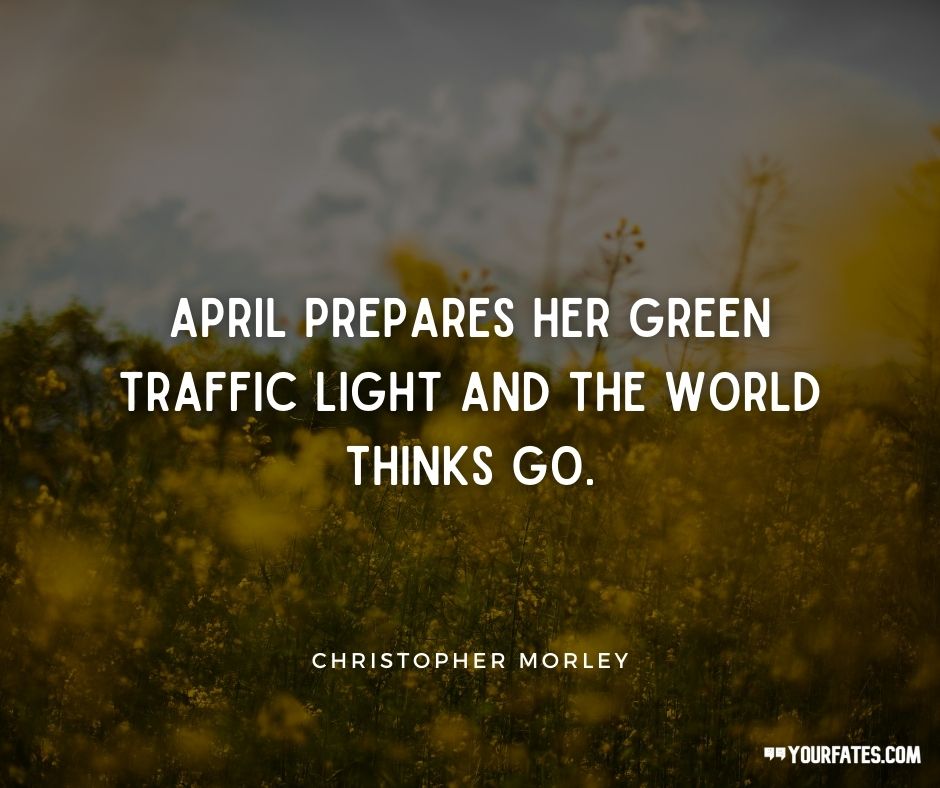 8. “If April showers should come your way, they bring the flowers that bloom in May.” – Buddy de Sylva

9. “It’s the hottest April in living and dead memory. So hot that the crows are flying with their tongues hanging out of their heads.” – Jess Kidd

10. “Spring is made of solid, fourteen-karat gratitude, the reward for the long wait. Every religious tradition from the northern hemisphere honors some form of April hallelujah, for this is the season of exquisite redemption, a slam-bang return to joy after a season of cold second thoughts.” – Barbara Kingsolver

11. “Our spring has come at last with the soft laughter of April suns and shadow of April showers.” – Byron Caldwell Smith

12. “Here cometh April again, and as far as I can see the world hath more fools in it than ever.” – Charles Lamb

14. “A gush of bird-song, a patter of dew, A cloud, and a rainbow’s warning, Suddenly sunshine and perfect blue – An April day in the morning.” – Harriet Prescott Spofford

16. “In the spring, at the end of the day, you should smell like dirt.” – Margaret Atwood 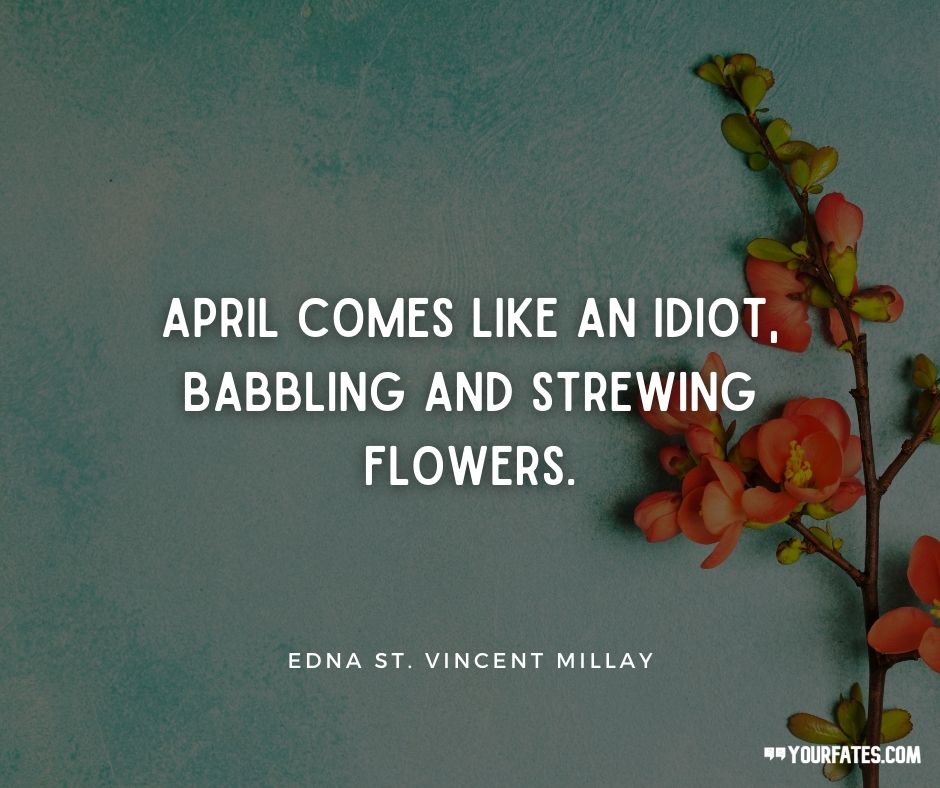 18. “It was a bright cold day in April, and the clocks were striking thirteen.” – George Orwell

19. “April weather, rain and sunshine both together.” – English Country Saying

20. “April hath put a spirit of youth in everything.” – William Shakespeare

21. “But it is a sort of April-weather life that we lead in this world. A little sunshine is generally the prelude to a storm.” – William Cowper

22. “Spring in the world! And all things are made new!” -Richard Hovey

23. “Oh to be in England now that April’s there.” – Robert Browning

24. “It is spring again. The earth is like a child that knows poems by heart.” – Rainer Maria Rilke

25. “The apple blossoms were just out, dancing like white froth in the April breezes.” – Nancy McKenzie 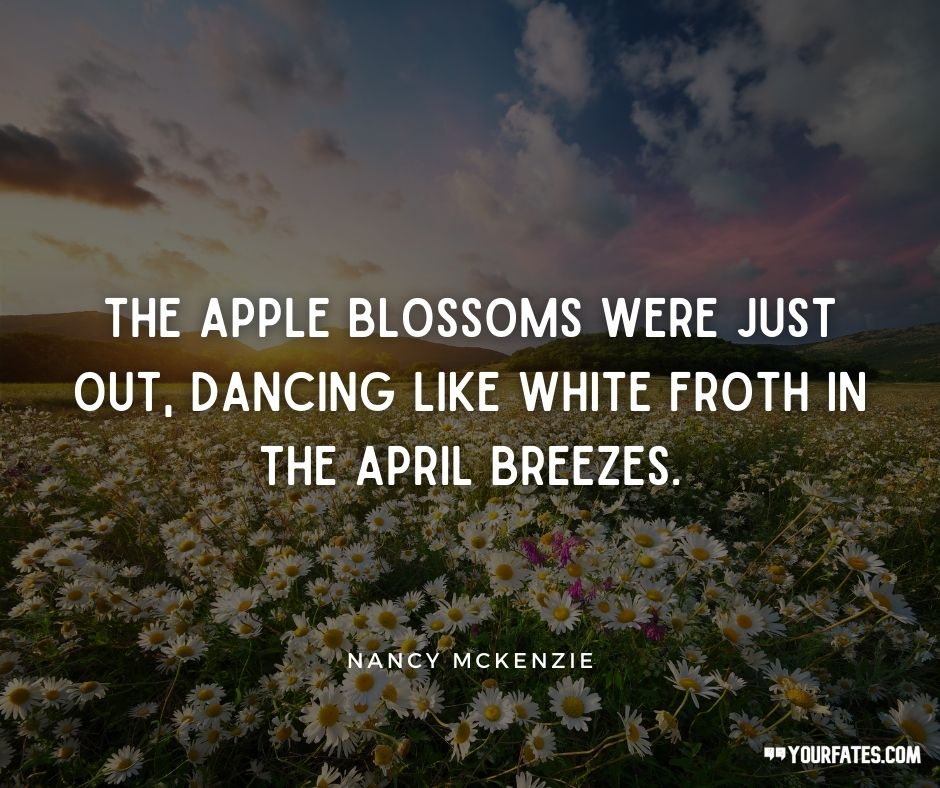 26. “She was, indeed, only April with her showers and sunshine, her tearful, childish laughter, and again the frown, and the despair irremediable.” – George MacDonald

27. “I would like best to be the robin just getting back to his old home; for it is brave and blithe and bonny that he is, and he is April to all of us in the far north.” – Fannie Hardy Eckstorm

28. “Summer is only the unfulfilled promise of spring, a charlatan in place of the warm balmy nights I dream of in April. It’s a sad season of life without growth…It has no day.” – F. Scott Fitzgerald

29. “April Fools gone past, and you’re the biggest fool at last.” – Unknown

30. “It was a bright cold day in April, and the clocks were striking thirteen.” –  George Orwell

34. “It is spring again. The earth is like a child that knows poems by heart.” – Rainer Maria Rilke 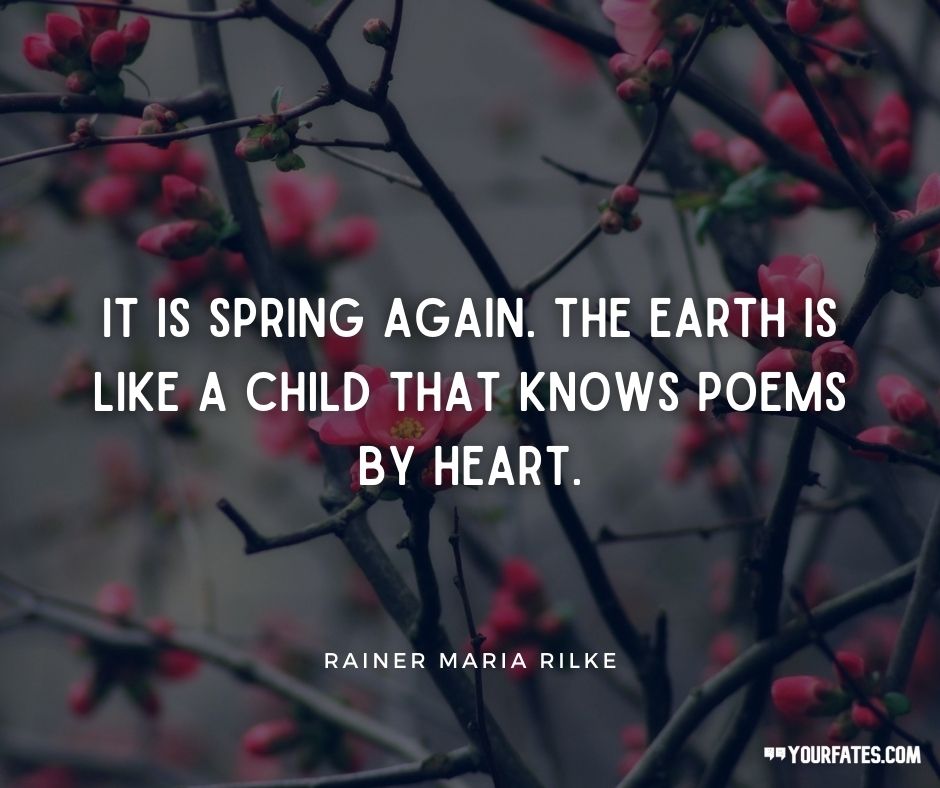 35. “Snow in April is abominable,” said Anne. “Like a slap in the face when you expected a kiss.” – L.M. Montgomery

36. “The most beautiful springs are those that come after the most horrible winters!” – Mehmet Murat ildan

38. “Although I was born in April, I’m quite certain I was not fully awake until October.” – Peggy Toney Horton

43. “You can cut all the flowers, but you cannot keep Spring from coming.” – Pablo Neruda

45. “Oh to be in England now that April’s there.” – Robert Browning

46. “The sun was warm but the wind was chill / You know how it is with an April day / When the sun is out and the wind is still / You’re one month on in the middle of May.” – Robert Frost

47. “Every tear is answered by a blossom / Every sigh with songs and laughter blent / April-blooms upon the breezes toss them / April knows her own, and is content.” – Susan Coolidge

49. “Remember, happiness doesn’t depend upon who you are or what you have, it depends solely upon what you think.” – Dale Carnegie

50. “Spring is when you feel like whistling even with a shoe full of slush.” – Doug Larson

51. “Spring shows what God can do with a drab and dirty world.” – Virgil A. Kraft

53. “Despite the forecast, live like it’s spring.” – Lilly Pulitzer

55. “Today has been a day dropped out of June into April.” – Lucy Maud Montgomery

58. “Don’t judge each day by the harvest you reap but by the seeds that you plant.” – Robert Louis Stevenson

59. “There is no glory in star or blossom till looked upon by a loving eye; There is no fragrance in April breezes till breathed with joy as they wander by.” – William Cullen Bryant

61. “April was just beginning, and after the warm spring day it turned cooler, slightly frosty, and a breath of spring could be felt in the soft, cold air.” – Anton Chekov

64. “The most beautiful springs are those that come after the most horrible winters!” – Mehmet Murat Ildan

65. “Who says February is the only month of flowers when we have Aprils too.”

66. “May you get everything you want and need this April.”

68. “Please, April, fill my days with happiness and love (and money, hehe)”

70. “It’s finally April, which means I get to have more flowers.”

So this April, have fun with making a little fool of your family and friends, but also make sure to indulge in the beautiful nature when it is on its peak this time of the year. Take out time for yourself, your family, your friends, go on drives, go on walks and just enjoy. Happy April.

We hope you like these collections of April Quotes. Also, If you’ve found us useful, please do consider telling your friends about it. All you have to do is send these quotes on WhatsApp and ask them to subscribe to us.

58 March Quotes For The Spring Lovers