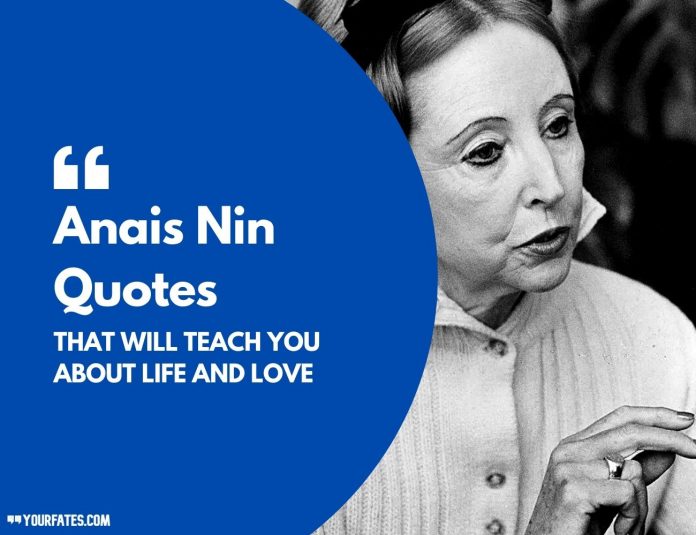 “We write to taste life twice: in the moment and retrospection.” – Anais Nin

Angela Anais Juana Antolina Rosa Edelmira Nin y Culmell is better known as Anais Nin in short. She was an essayist, novelist, diarist, and writer of short stories and erotica. She was also a composer by profession and a Cuban Classical Singer. She found her passion in writing when she was eleven years old.

She was fluent in English both orally and in writing but she held onto her French roots. Nin was daring who lived with her moral code, wrote about her adventures, and then published her memoir for the world to read. She has published more than 30 books of which eight volumes were about her personal life. Anais Nin even acted in some movies like Ritual in Transfigured Time. At the age of 73, she died of cervical cancer. Today we have come up with the daring woman Anais Nin Quotes and Sayings which will inspire and motivate you.

1. “Dreams pass into the reality of action. From the actions stems the dream again; and this interdependence produces the highest form of living.” – Anais Nin

2. “Each contact with a human being is so rare, so precious, one should preserve it.” – Anais Nin

3. “And the day came when the risk to remain tight in a bud was more painful than the risk it took to blossom.” – Anais Nin

5. “The possession of knowledge does not kill the sense of wonder and mystery. There is always more mystery.” – Anais Nin 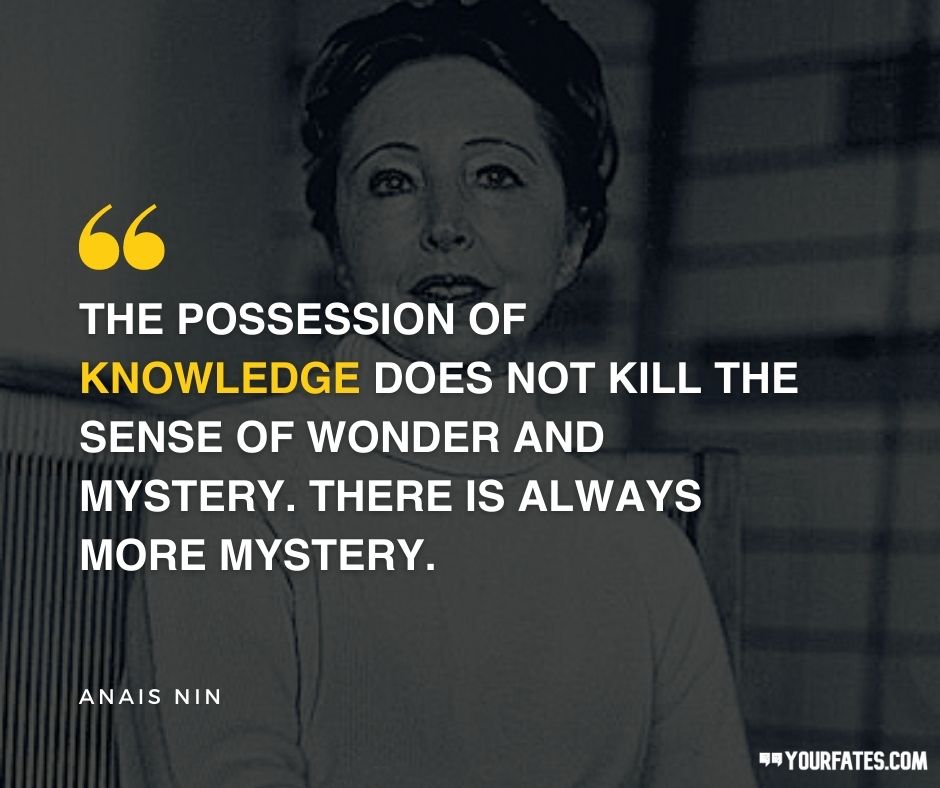 7. “Reality doesn’t impress me. I only believe in intoxication, in ecstasy, and when ordinary life shackles me, I escape, one way or another.” – Anais Nin

8. “We travel, some of us forever, to seek other states, other lives, other souls.” – Anais Nin

10. “We do not escape into philosophy, psychology, and art ― we go there to restore our shattered selves into whole ones.” – Anais Nin

11. “Truth is something which can’t be told in a few words. Those who simplify the universe only reduce the expansion of its meaning.” – Anais Nin

12. “I’m restless. Things are calling me away. My hair is being pulled by the stars again.” – Anais Nin

13. “Luxury is not a necessity to me, but beautiful and good things are.” – Anais Nin

15. “Whenever you do something that is not aligned with the yearning or your soul—you create suffering.” – Anais Nin 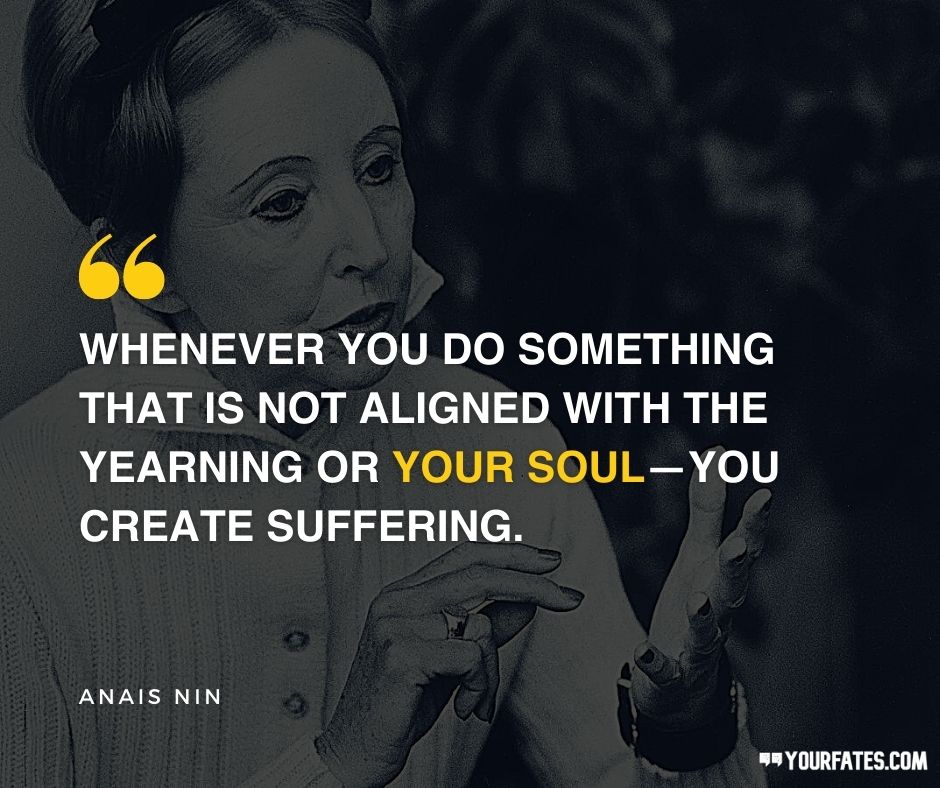 17. “I believe one writes because one has to create a world in which one can live.” – Anais Nin

18. “One word I would banish from the dictionary is ‘escape.’ Just banish that and you’ll be fine.” – Anais Nin

19. “There are very few human beings who receive the truth, complete and staggering, by instant illumination.” – Anais Nin

20. “If you limit yourself only to what seems possible or reasonable, you disconnect yourself from what you truly want, and all that is left is compromise.” – Anais Nin

21. “Each friend represents a world in us, a world possibly not born until they arrive, and it is only by this meeting that a new world is born.” – Anais Nin

22. “My mission, should I choose to accept it, is to find peace with exactly who and what I am. To take pride in my thoughts, my appearance, my talents, my flaws and to stop this incessant worrying that I can’t be loved as I am.” – Anais Nin

23. “Good things happen to those who hustle.” – Anais Nin

24. “When we blindly adopt a religion, a political system, a literary dogma, we become automatons.” – Anais Nin

25. “Since desire always goes towards that which is our direct opposite, it forces us to love that which will make us suffer.” – Anais Nin

26. “Love never dies a natural death. It dies because we don’t know how to replenish its source. It dies of blindness and errors and betrayals. It dies of illness and wounds; it dies of weariness, of witherings, of tarnishings.” – Anais Nin

27. “The truly faithless one is the one who makes love to only a fraction of you. And denies the rest.” – Anais Nin

28. “I will not be just a tourist in the world of images, just watching images passing by which I cannot live in, make love to, possess as permanent sources of joy and ecstasy.” – Anais Nin

29. “Do not seek the because – in love there is no because, no reason, no explanation, no solutions.” – Anais Nin 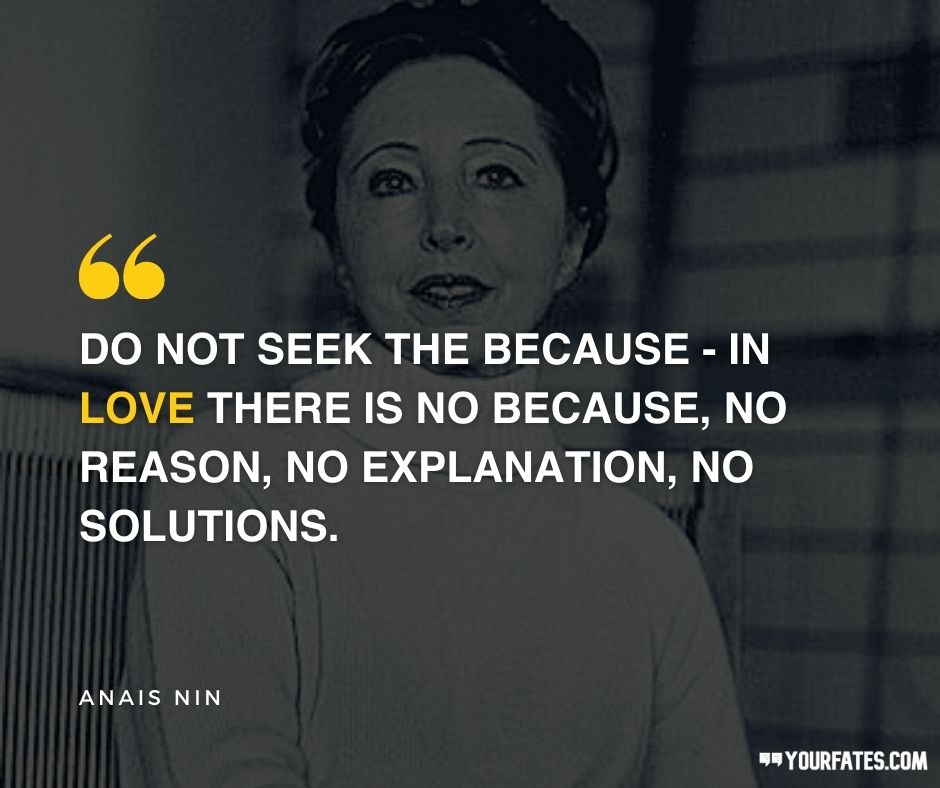 30. “I can elect something I love and absorb myself in it.” – Anais Nin

31. “What I cannot love, I overlook. Is that real friendship?” – Anais Nin

32. “I reserve the right to love many different people at once, and to change my prince often.” – Anais Nin

34. “If I love you it means we share the same fantasies, the same madnesses.” – Anais Nin

35. “Throw your dreams into space like a kite, and you do not know what it will bring back, a new life, a new friend, a new love, a new country.” – Anais Nin

36. “Our love of each other was like two long shadows kissing without hope of reality.” – Anais Nin

37. “Where the myth fails, human love begins. Then we love a human being, not our dream, but a human being with flaws.” – Anais Nin

38. “He was now in that state of fire that she loved. She wanted to be burnt.” – Anais Nin

39. “Age does not protect you from love. But love, to some extent, protects you from age.” – Anais Nin

40. “The only abnormality is the incapacity to love.” – Anais Nin

41. “Life is a process of becoming, a combination of states we have to go through. Where people fail is that they wish to elect a state and remain in it. This is a kind of death.” – Anais Nin

42. “Life shrinks or expands according to one’s courage.” – Anais Nin

43. “I watched life and wanted to be a part of it but found it painfully difficult.” – Anais Nin

44. “Life is truly known only to those who suffer, lose, endure adversity and stumble from defeat to defeat.” – Anais Nin

45. “I postpone death by living, by suffering, by error, by risking, by giving, by losing.” – Anais Nin

46. “We write to taste life twice, in the moment and in retrospect.” – Anais Nin

47. “People living deeply have no fear of death.” – Anais Nin

48. “The personal life deeply lived always expands into truths beyond itself.” – Anais Nin

49. “Only in the fever of creation could she recreate her own lost life.” – Anais Nin

51. “I want to make my own discoveries… penetrate the evil which attracts me.” – Anais Nin

52. “Our life is composed greatly from dreams, from the unconscious, and they must be brought into connection with action. They must be woven together.” – Anais Nin 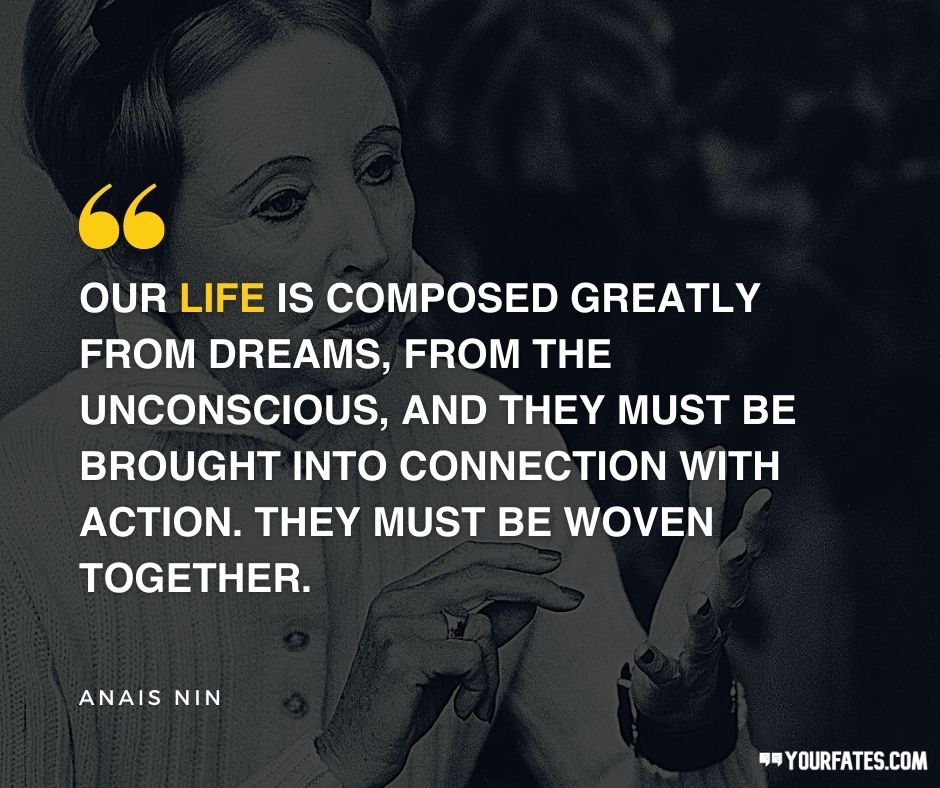 53. “I have no brakes on…analysis is for those who are paralyzed by life.” – Anais Nin

54. “I know why families were created with all their imperfections. They humanize you. They are made to make you forget yourself occasionally, so that the beautiful balance of life is not destroyed.” – Anais Nin

55. “Life is a full circle, widening until it joins the circle motions of the infinite.” – Anais Nin

If you haven’t read any of Anais Nin’s books, you can start with the Delta of Venus book. If you don’t have the patience to read books then you can watch Delta Of Venus from Amazon Prime. The story is about the struggling American writer, her chaos, and the affair which happened during World War II.  Have a great movie time!

We hope you like these collections of Best Anais Nin Quotes. Also, If you’ve found us useful, please do consider telling your friends about it. All you have to do is send these quotes on WhatsApp and ask them to subscribe to us.