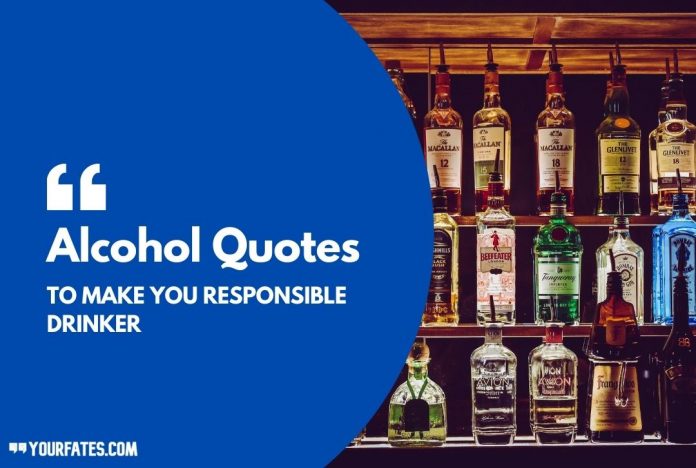 Rum rum rum rum rum oh whiskey!!! Save water, drink whiskey? Yes? No? Maybe? The answer is: if yes then in limit and you will be good, if no then you are already great. The choice is yours. Because alcohol is not bad, uncontrolled alcohol is bad. Various alcoholic drinks have various good effects to human health when taken in moderation. It is scientifically proven. And for all the trippy people out there we have gathered together this thoughtful collection of Alcohol Quotes and Sayings. Read on while sipping on your beer. Cheers.

If you are a drinker, be a responsible one. If you drink alone, drink within the limit. If you drink in a group, make sure there are trustworthy people around you. Don’t be habitual to liquor for happiness or peace. And the most important thing, never drink and drive. Stay safe people.

So here we have tried to collect the most sensible Alcohol Quotes and Sayings, read on:

1. “It’s a great advantage not to drink among hard-drinking people.” – F. Scott Fitzgerald

2. “Alcohol may be man’s worst enemy, but the bible says love your enemy.” – Frank Sinatra

3. “Every form of addiction is bad, no matter whether the narcotic be alcohol or morphine or idealism.” – Carl Jung

4. “Drunkenness is nothing but voluntary madness.” – Seneca

6. “Everybody’s got to believe in something. I believe I’ll have another beer.” – W.C. Fields

11. “Beer is proof that God loves us and wants us to be happy.” – Benjamin Franklin

12. “Alcohol is the anesthesia by which we endure the operation of life.” – George Bernard Shaw 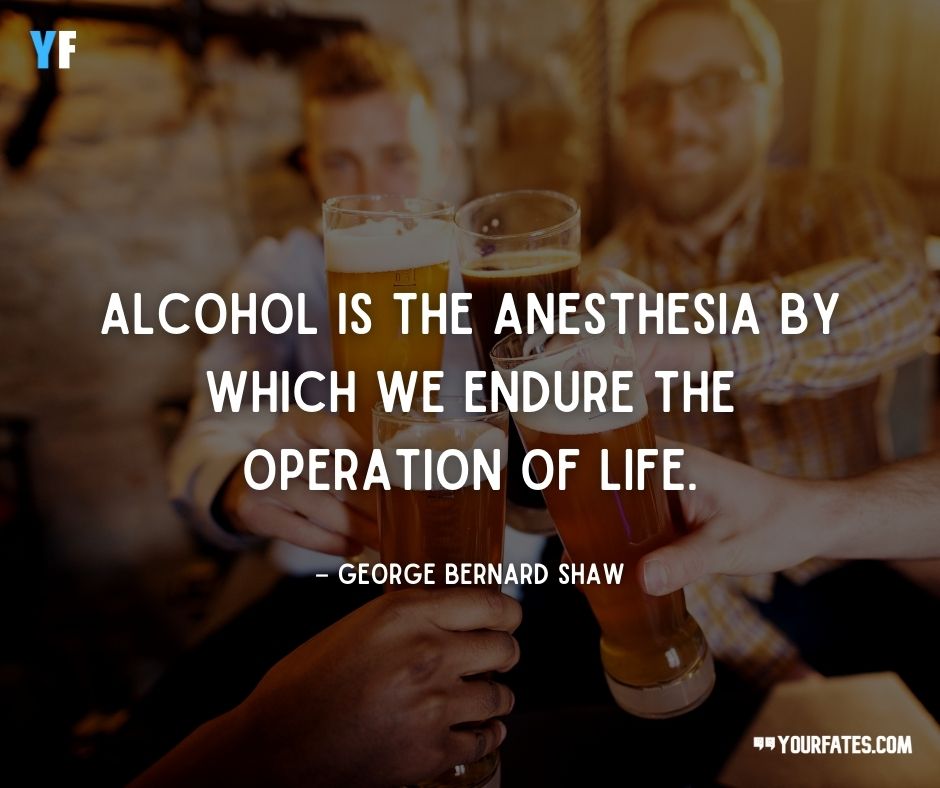 13. “I think the warning labels on alcoholic beverages are too bland. They should be more vivid. Here is one I would suggest: “Alcohol will turn you into the same asshole your father was.” – George Carlin

17. “I have taken more out of alcohol than alcohol has taken out of me.” – Winston Churchill

19. “Always do sober what you said you’d do drunk. That will teach you to keep your mouth shut.” – Ernest Hemmingway

20. “Herb is the healing of a nation, alcohol is the destruction.” – Bob Marley

22. “Alcohol, taken in sufficient quantities, may produce all the effects of drunkenness.” – Oscar Wilde

24. “Alcohol is necessary for a man so that he can have a good opinion of himself, undisturbed be the facts.” – Finley Peter Dunne 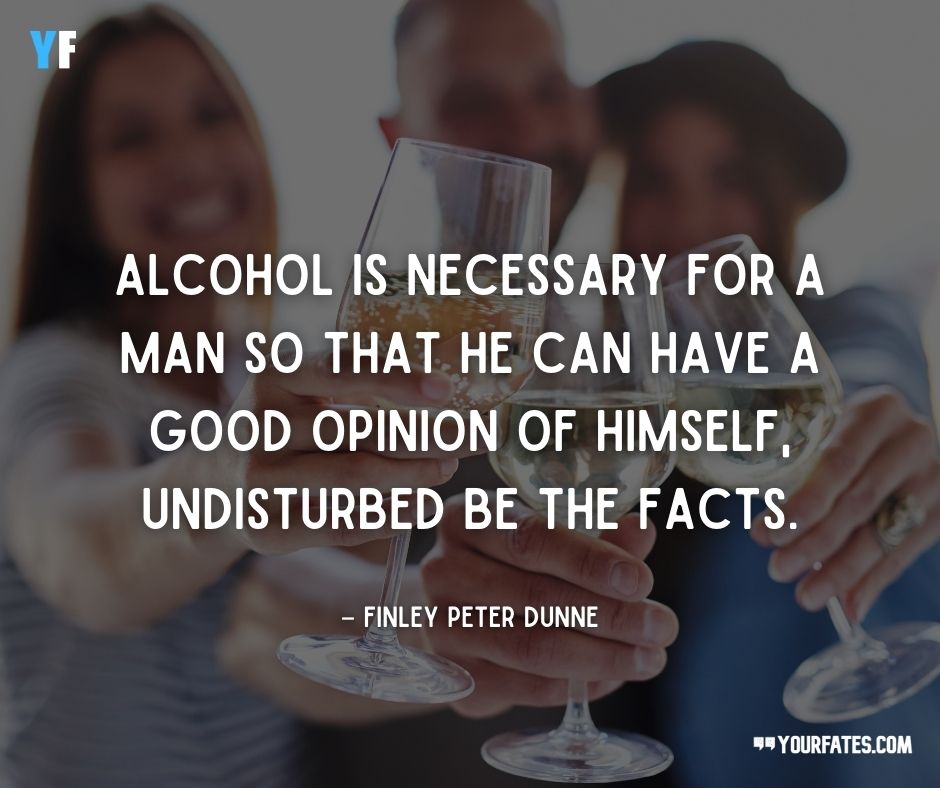 25. “I think I need a drink. Almost everybody does only they don’t know it.” – Charles Bukowski

28. “Without question the greatest invention in the history of mankind is beer. Oh, I grant you that the wheel was also a fine invention but the wheel does not go nearly as well with pizza.” – Dave Barry

29. “If you ever reach total enlightenment while drinking beer, I bet it makes beer shoot out your nose.” – Jack Handy

30. “In wine there is wisdom, in beer there is Freedom, in water there is bacteria.” – Benjamin Franklin 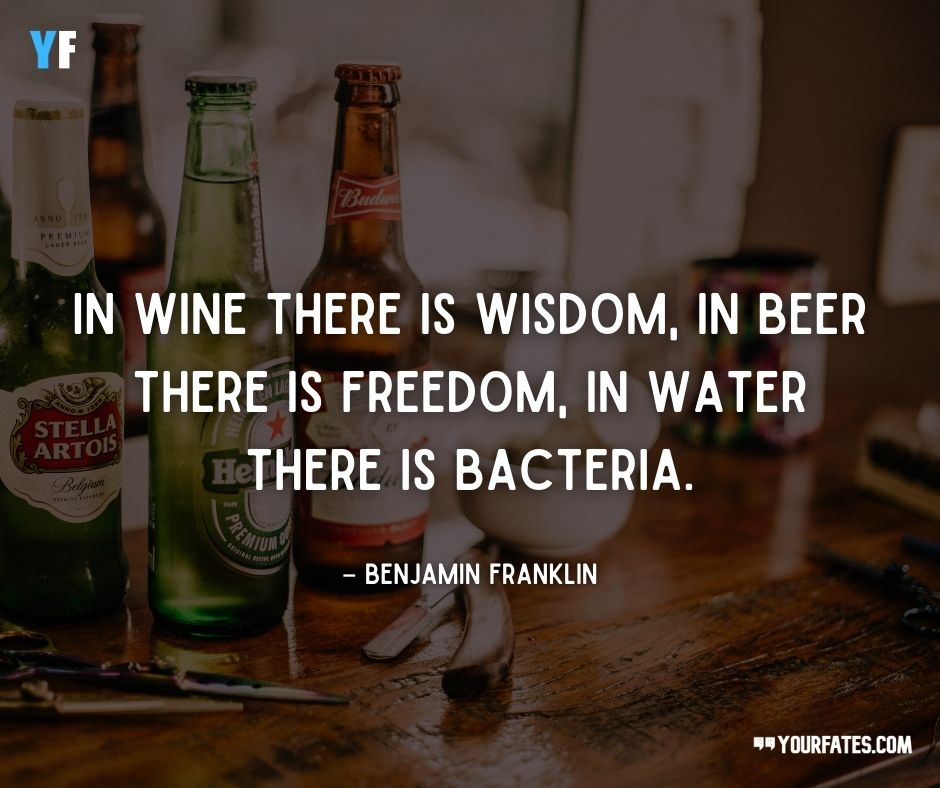 31. “As an alcoholic, you will violate your standards quicker than you can lower them.” Robin Williams

32. “The problem with the world is that everyone is a few drinks behind.” – Humphrey Bogart

33. “When I read about the evils of drinking, I gave up reading.” – Henny Youngman

34. “I envy people who drink, at least they know what to blame everything on.” – Oscar Levant

35. “My rule of life prescribed as an absolutely sacred rite smoking cigars and also the drinking of alcohol before, after and if need be during all meals and in the intervals between them.” – Winston Churchill

37. “It is the wine that leads me on, the wild wine that sets the wisest man to sing at the top of his lungs, laugh like a fool — it drives the man to dancing… it even tempts him to blurt out stories better never told.” – Homer

38. “I am a firm believer in the people. If given the truth, they can be depended upon to meet any national crisis. The great point is to bring them the real facts, and beer.” – Abraham Lincoln

39. “Beer dulls a memory, brand sets it burning, but wine is the best for a sore heart’s yearning.” – Patrick Rothfuss

41. “Electricity is actually made up of extremely tiny particles called electrons, that you cannot see with the naked eye unless you have been drinking.” – Dave Barry

42. “It takes only one drink to get me drunk…..the trouble is, I can’t remember if it’s the thirteenth or the fourteenth.” – George Burns 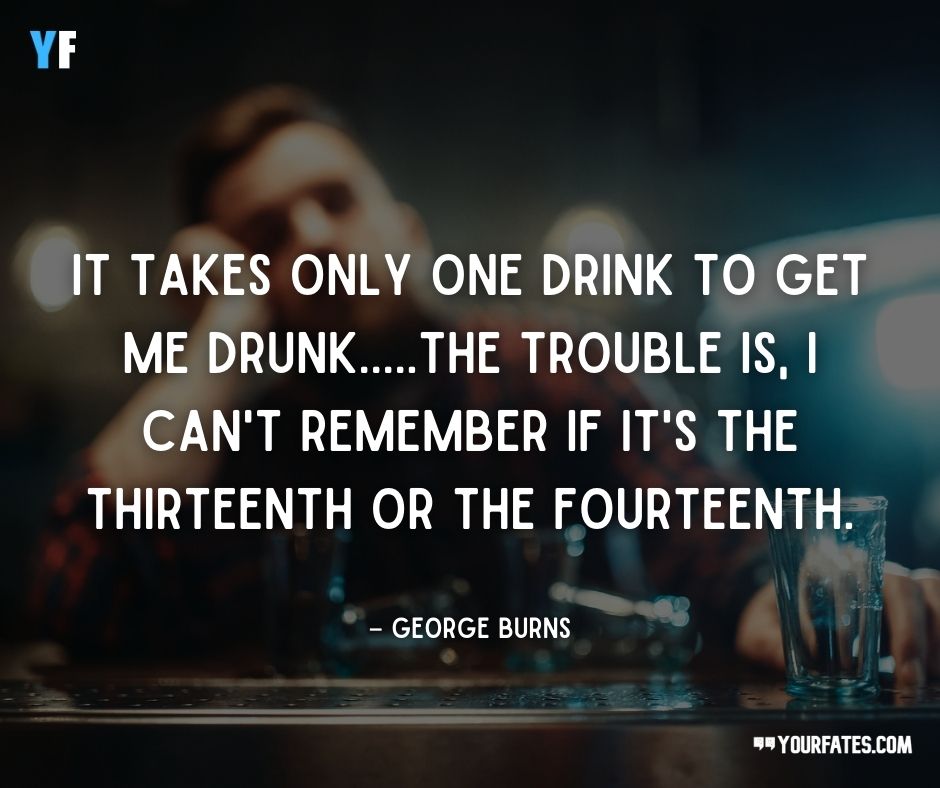 43. “There comes a time in every woman’s life when the only thing that helps is a glass of champagne.” – Bette Davis

45. “The first glass is for myself, the second for my friends, the third for good humor, and the fourth for my enemies.” – William Temple

46. “I try to convince myself that it’s the alcohol talking. But alcohol can’t talk. It just sits there. It can’t even get itself out of the bottle.” – David Levithan

47. “I went to the worst of bars hoping to get killed but all I could do was to get drunk again.” – Charles Bukowski

48. “A bottle of wine contains more philosophy than all the books in the world.” – Louis Pasteur 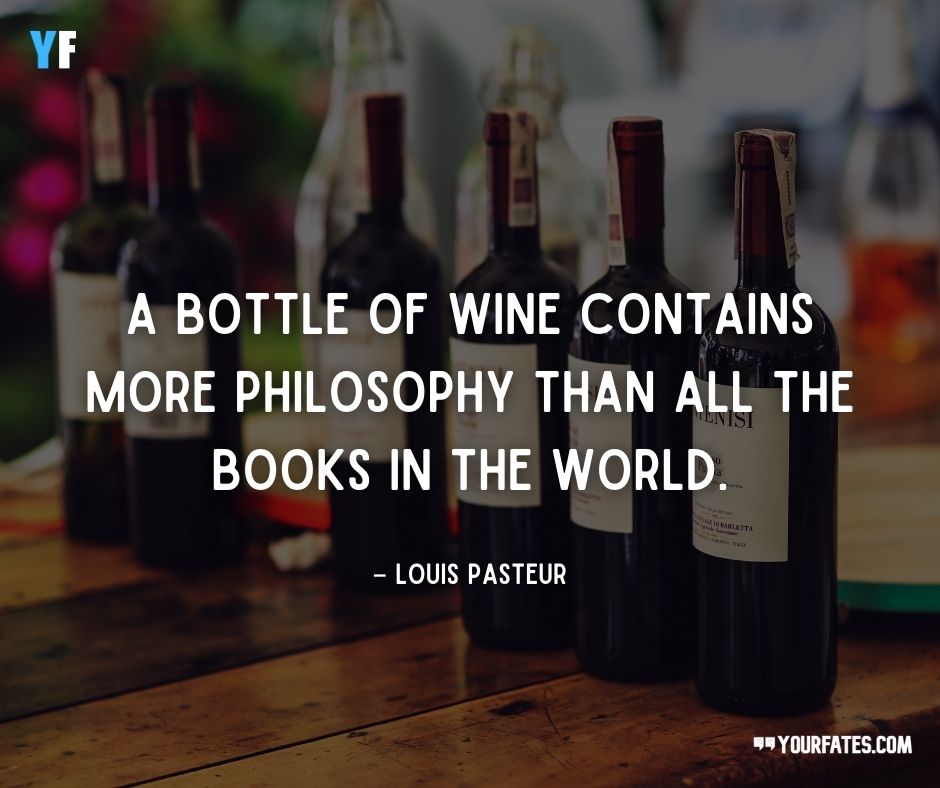 49. “Men are like wine – some turn to vinegar, but the best improve with age.” — Pope John XXIII

51. “Step Aside COFFEE This is a Job for ALCOHOL” — Unknown

52. “Not to get technical, But according to chemistry ALCOHOL is a solution.” — Unknown

54. “Always buy a bigger bottle than you think You’ll need. Better to be safe than sober.” — Unknown

55. “I drink alcohol to drown my problems, unfortunately my problems are damn good swimmers.” — Unknown

56. “Age is just a number. It’s totally irrelevant unless, of course, you happen to be a bottle of wine.”- Joan Collins

57. “War and drink are the two things man is never too poor to buy.”- William Faulkner

62. “People are not addicted to Alcohol or drugs, They are addicted to escaping reality.” — Unknown

63. “Alcohol does not make you fat, it makes you lean: against tables, chairs, walls, floors and ugly people.” — Unknown

65. “I drink wine because my doctor said I shouldn’t keep things bottled up.” — Unknown

If you are hitting a rock bottom in life, then a peg of rum on the rocks and bottoming up your peg while talking to your close and favorite people might seem like therapy. But remember, you don’t necessarily have to drink to be happy. Non-drinkers are also happy and content, drinkers are also miserable. So choose what you can handle responsibly.

We hope you like these collections of Alcohol Quotes. Also, If you’ve found us useful, please do consider telling your friends about it. All you have to do is send these quotes on WhatsApp and ask them to subscribe to us.